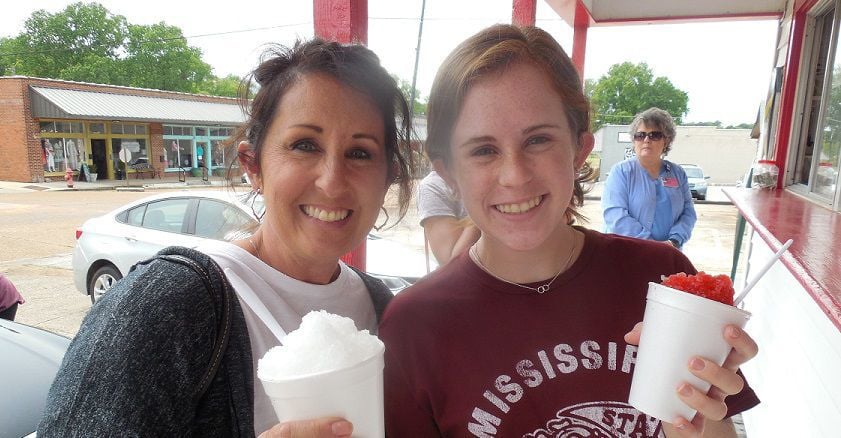 Mother and daughter Alison and Maggie Moore enjoy treats from the Snow Shack in New Albany. 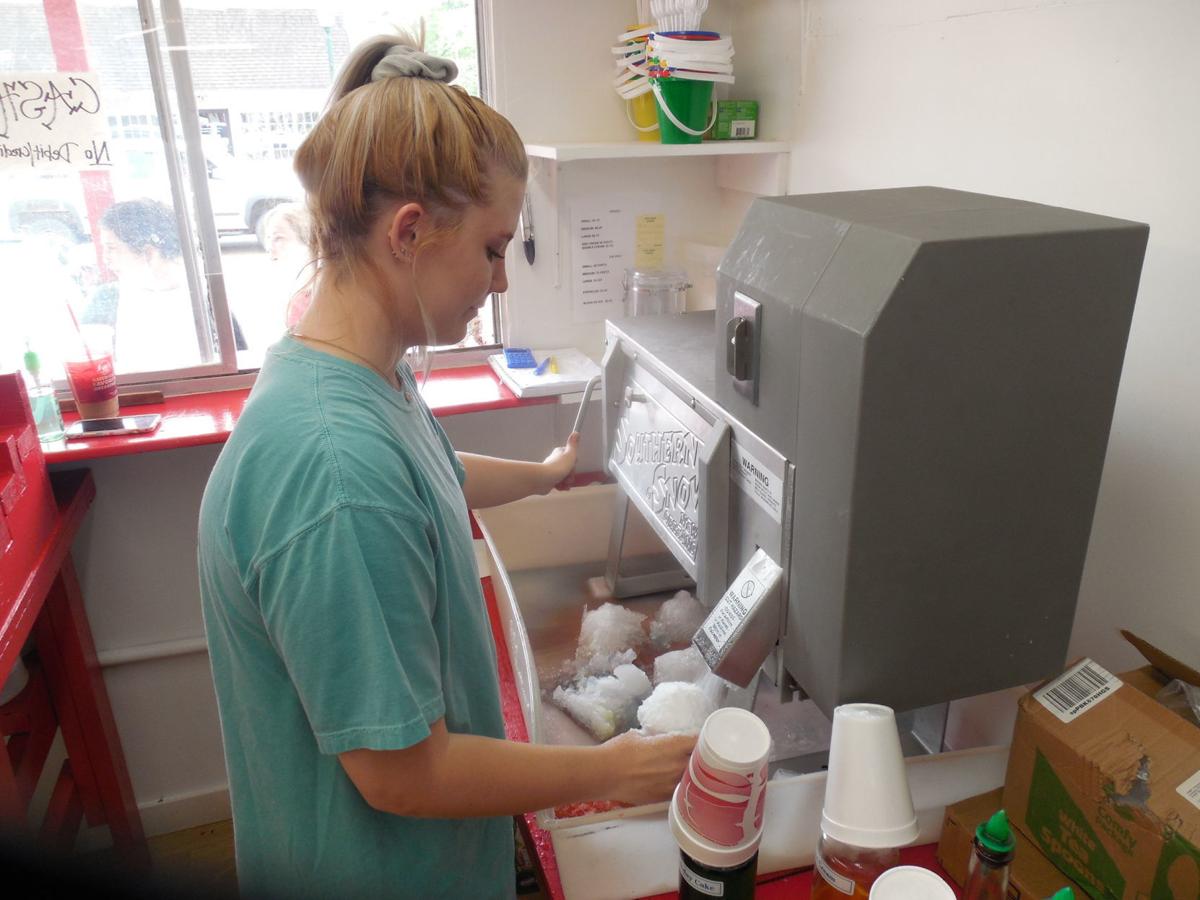 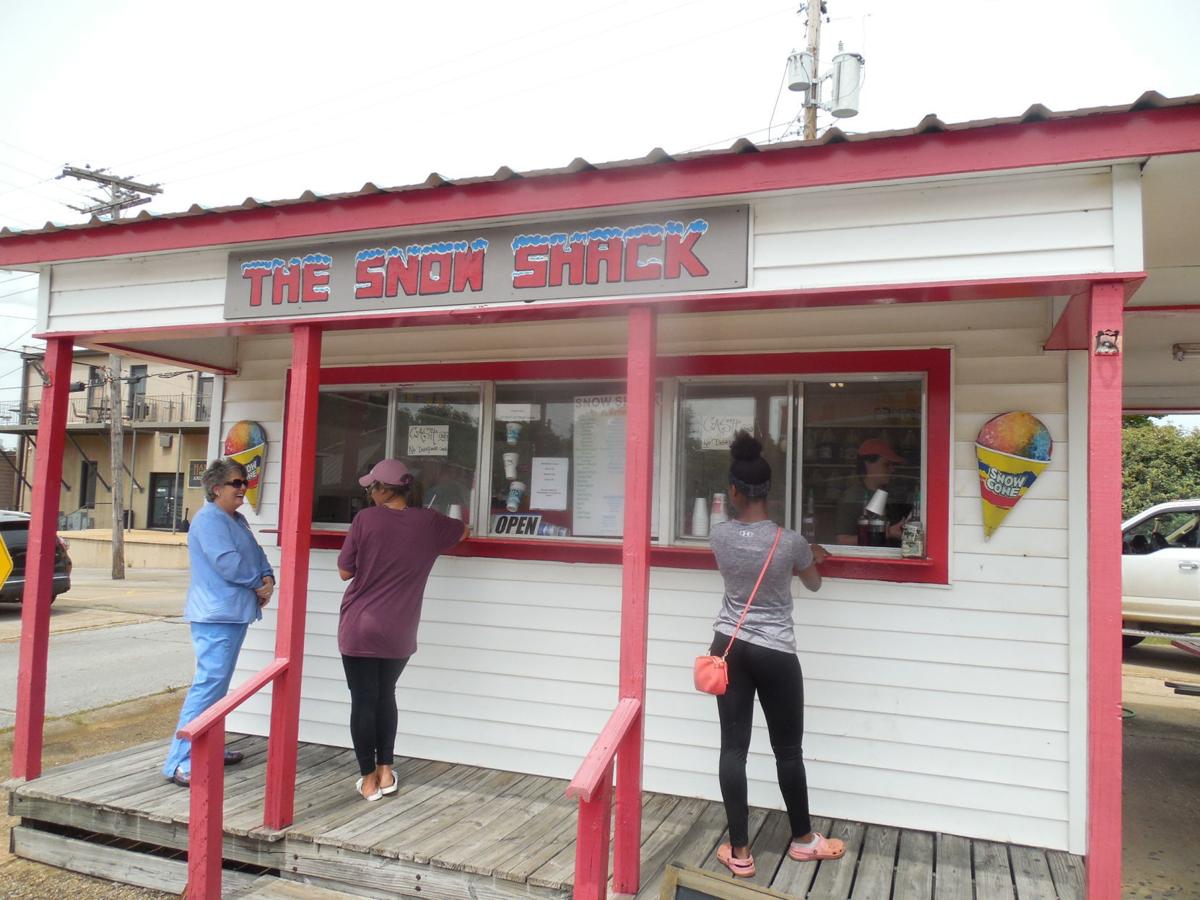 The Snow Shack is located in downtown New Albany.

Mother and daughter Alison and Maggie Moore enjoy treats from the Snow Shack in New Albany.

The Snow Shack is located in downtown New Albany.

People were all smiles at the Snow Shack last week.

Something about getting a snow cone on a warm spring day seemed to make them happy.

Two of those satisfied customers were Alison Moore and her daughter, Maggie.

Alison had ordered the Bulldog Blitz, a maroon-colored treat, consistent with the school colors at Mississippi State and New Albany.

Alison went to Mississippi State and to New Albany schools and said she gets the Bulldog Blitz snow cone every time she goes to the Snow Shack.

“I’m a Bulldog all the way down to my snacks,” said Alison, adding that the snow cones are “fantastic” and the service is good too.

Journey Turner of Myrtle was another customer at the Snow Shack and had actually been two days in a row.

“I was here yesterday too,” Turner said, laughing.

Turner said the snow cones are good, noting that they have “a lot of flavor” and she enjoys the soft ice.

The Snow Shack, located in the heart of downtown New Albany at 103 E. Main St., is operated by married couple Ben and Cheryl Sanders

There is covered outdoor seating available so customers can enjoy their snow cones in the cool shade during the hot summer months. Cooper Park is also located right next to the Snow Shack, and the Park Along the River is nearby as well.

The Snow Shack, which has been around since 1992, opened for the season last week and has already been busy with customers lined up for their favorite treats.

The business employs eight to 10 people, and Ben actually used to work there when he was in high school about 30 years ago.

This is the second season that Ben and Cheryl have operated the Snow Shack, and last season was a success, they said.

“People in New Albany took care of us,” said Ben, adding that the business usually stays busy when the weather is good.

Ben and Cheryl think the Snow Shack is so popular because it offers a good product, with good service at a good price. Ben summed it up by saying it’s a “good cold treat on a hot day.”

Sizes include small, medium and large, and there are some 60 different flavors. Popsicles are available as well. There are also stuffed snow cones that come with a scoop of cheesecake or ice cream in the middle of the snow cone.

Examples of different flavors include Wedding Cake, Angry Birds and Rebel Yell. One of their customers even created a flavor called Poison Apple, and a new flavor called Silver Fox will be added to the menu soon.

“We’re eager to try it ourselves,” said Cheryl, who is also a nurse anesthetist at the hospital.

Ben, who also has his own landscaping and lawn care business, noted that the business is definitely open to adding new flavors that customers request.

“I’m open to any and all suggestions from anybody,” he said.

Gummy worms that can be put on the top of children’s snow cones were also added last year.

Cream is another great topping that people enjoy to make their snow cones sweeter. In fact, Cheryl’s favorite snow cone flavor is Ice Cream with cream on top while Ben’s is Wedding Cake with cream.

They get all ages of customers, ranging from little ones to adults.

“Senior citizens like our snow cones too,” Cheryl said.

“We get to see some of them eat their first snow cone as a baby,” Cheryl said. “That’s the best.”

They love the fact that the Snow Shack is located downtown. Ben’s grandfather used to own Van Atkins department store, which was where Cooper Park is presently located. The department store burned down around the year 2000.

“I grew up down here and know everybody and everybody knows us,” said Ben. “It’s just a good all around place.”

Ben and Cheryl both graduated from W.P. Daniel High School, which is now called New Albany High School. They have been married almost 22 years.

They have two children—Caroline, 14, and Cooper, 8. The family lives in Ingomar, and in their spare time they enjoy going to the beach and the mountains.

Cooper already works at the business by unloading ice.

“He wants a paycheck already,” Ben said, adding that the Snow Shack probably goes through over 100 blocks of ice per week.