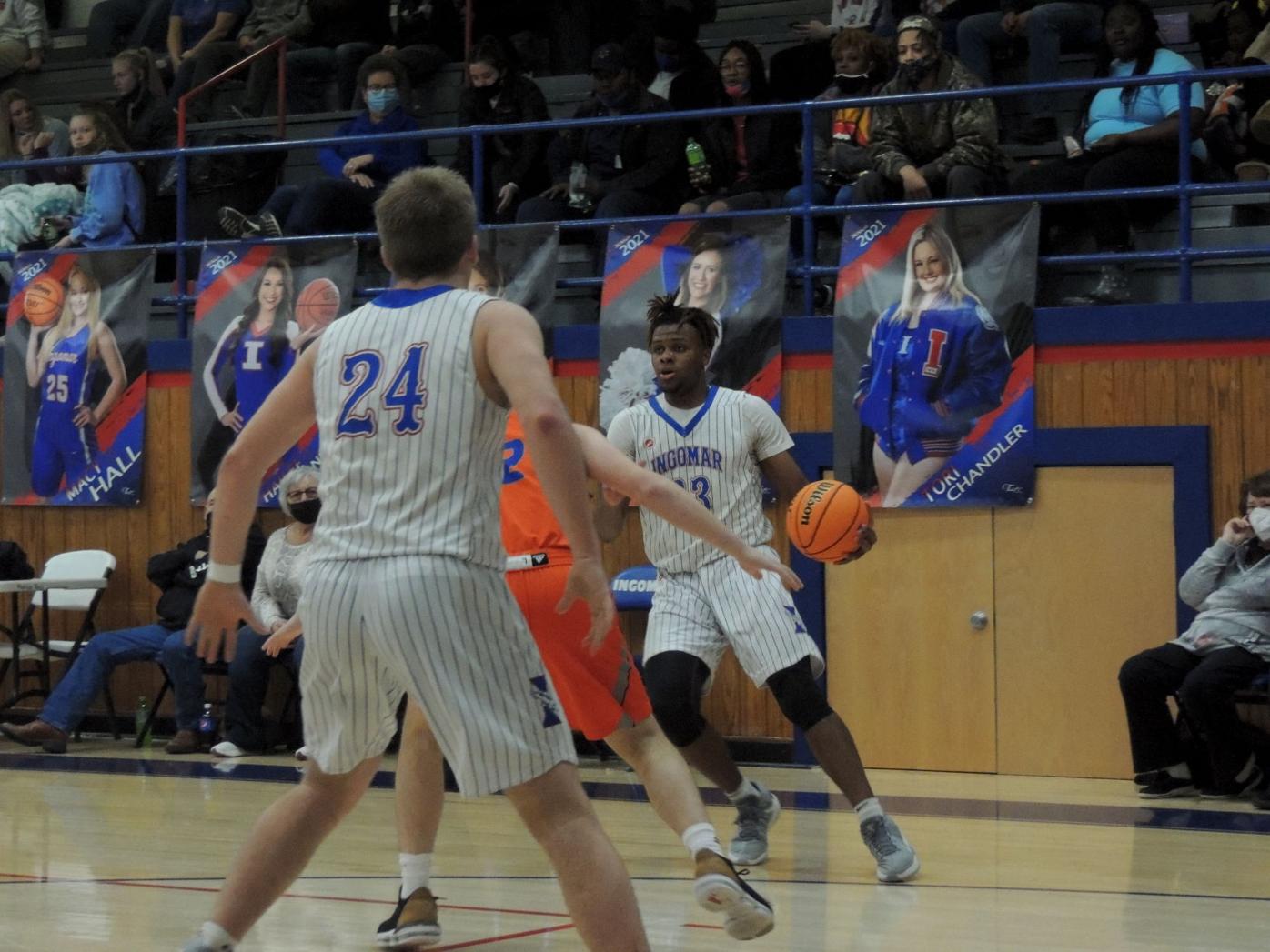 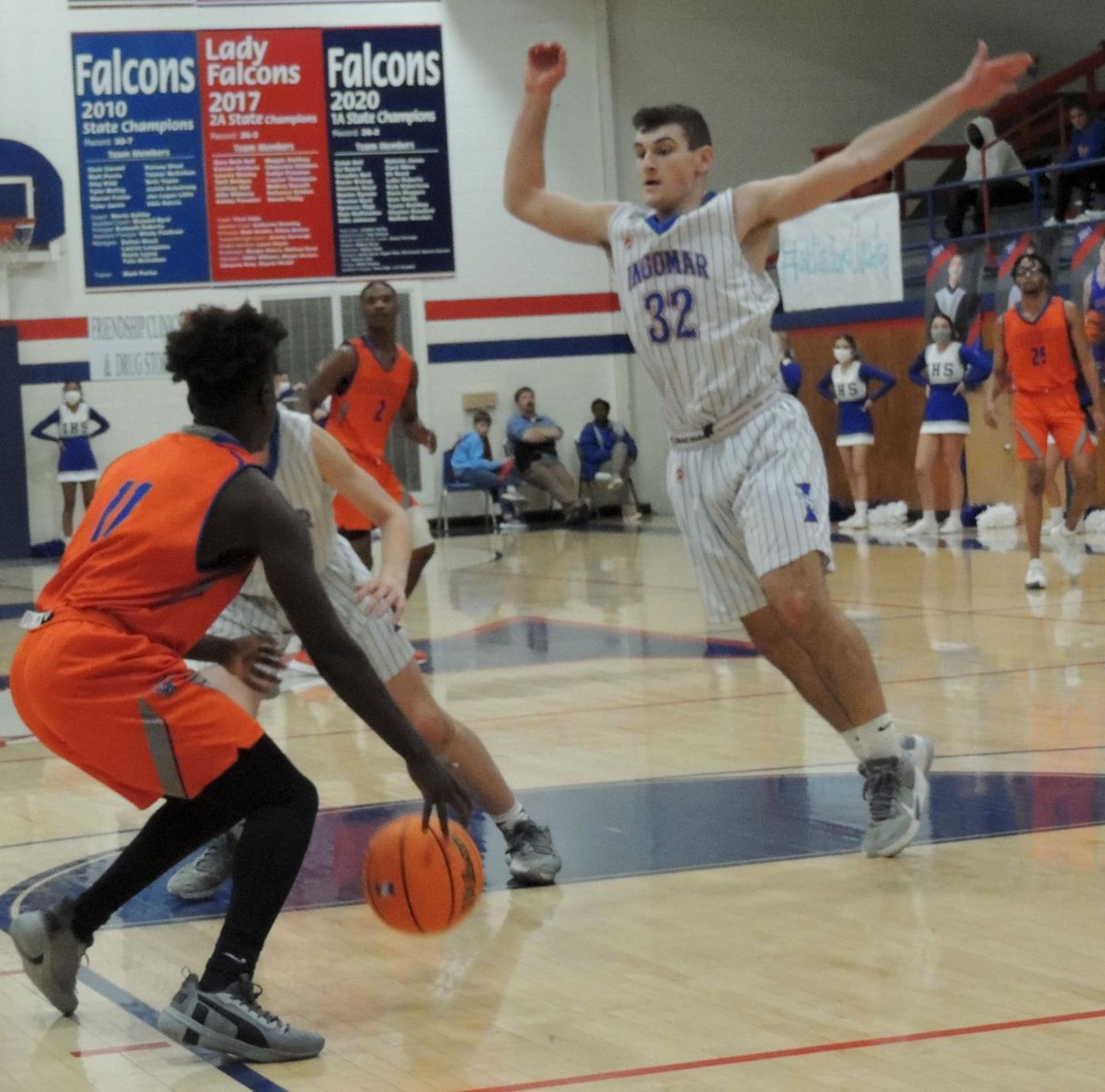 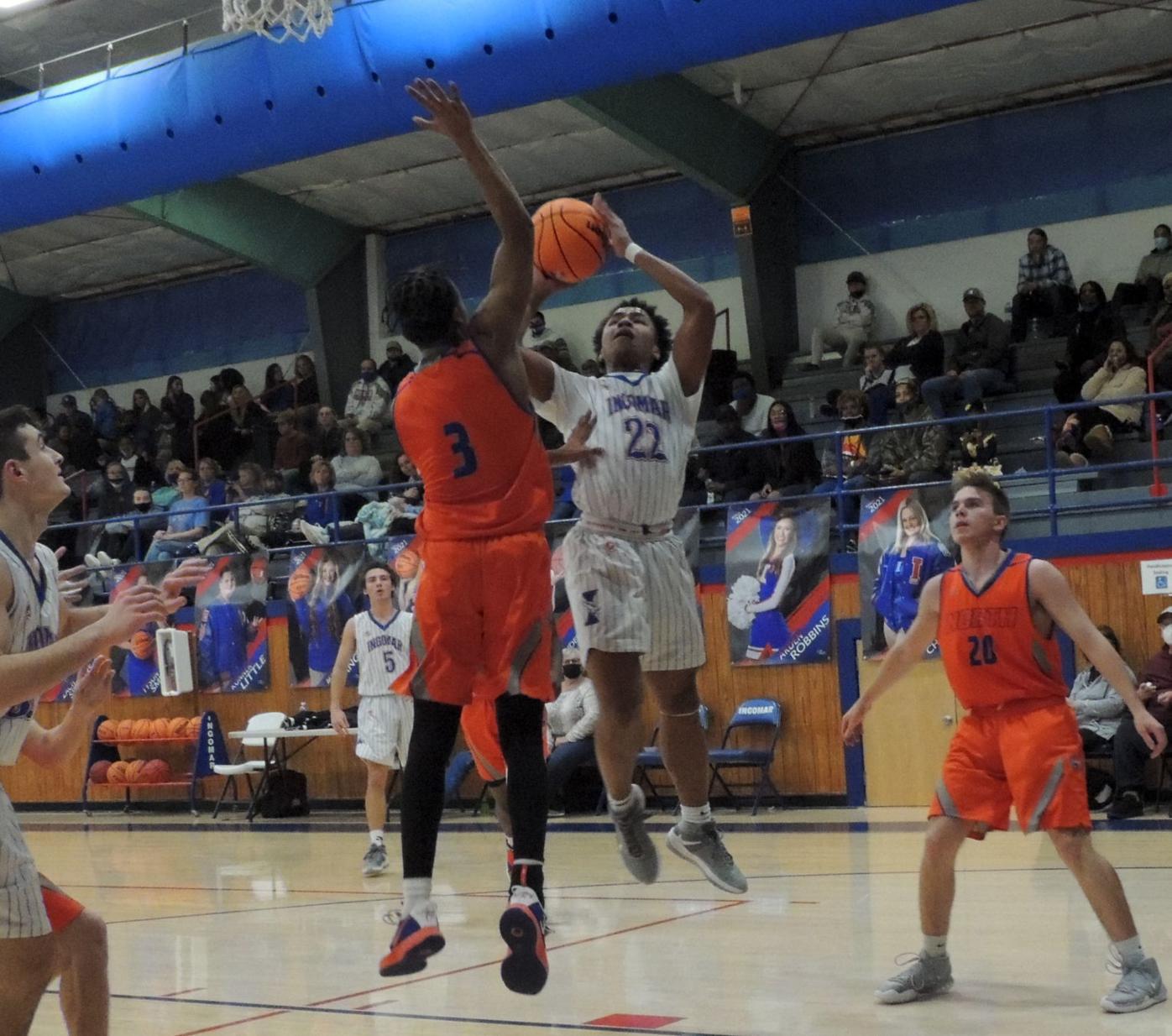 Ingomar's DJ Beard (22) goes up for a shot over North Pontotoc's Ty Roberson. 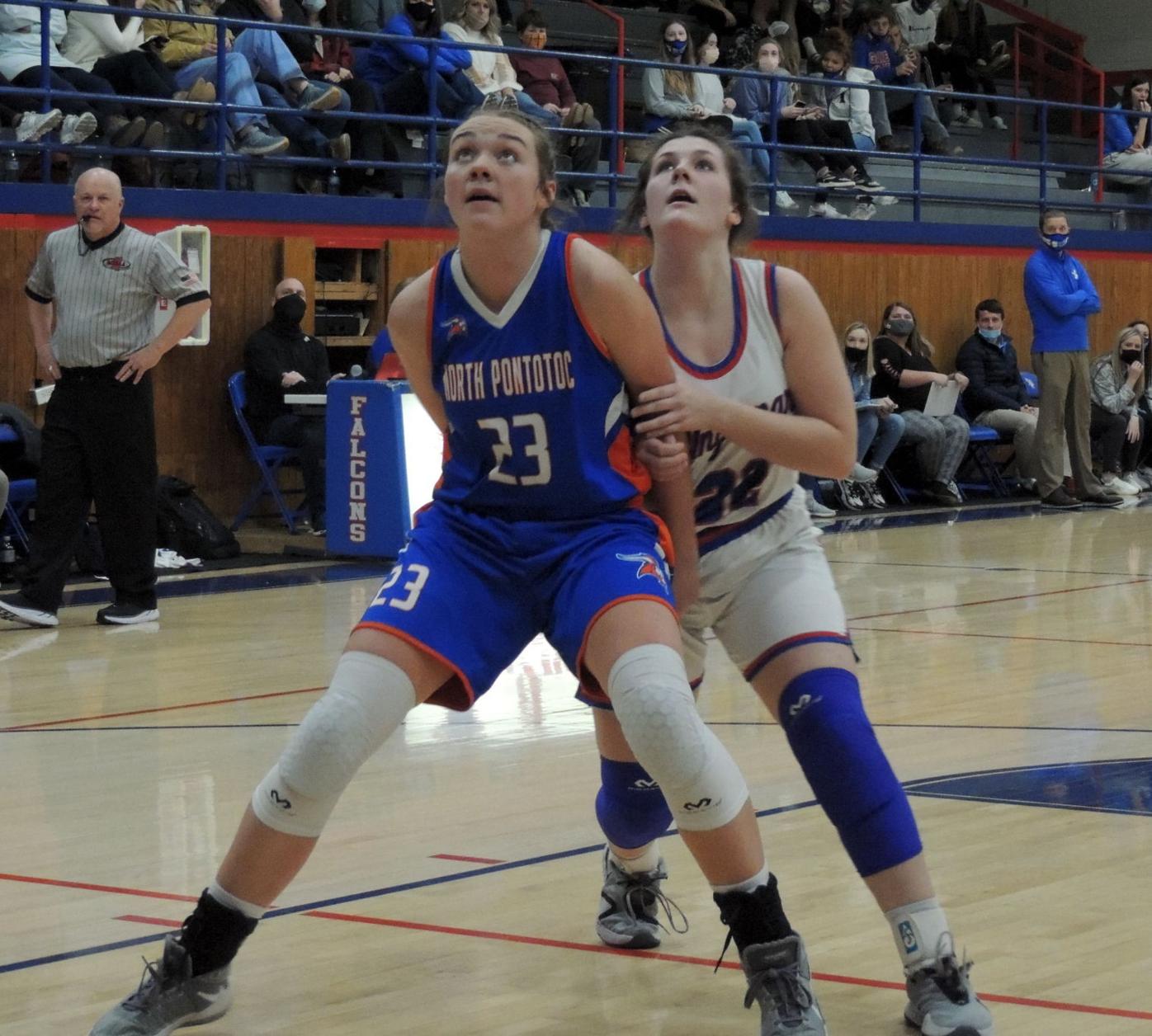 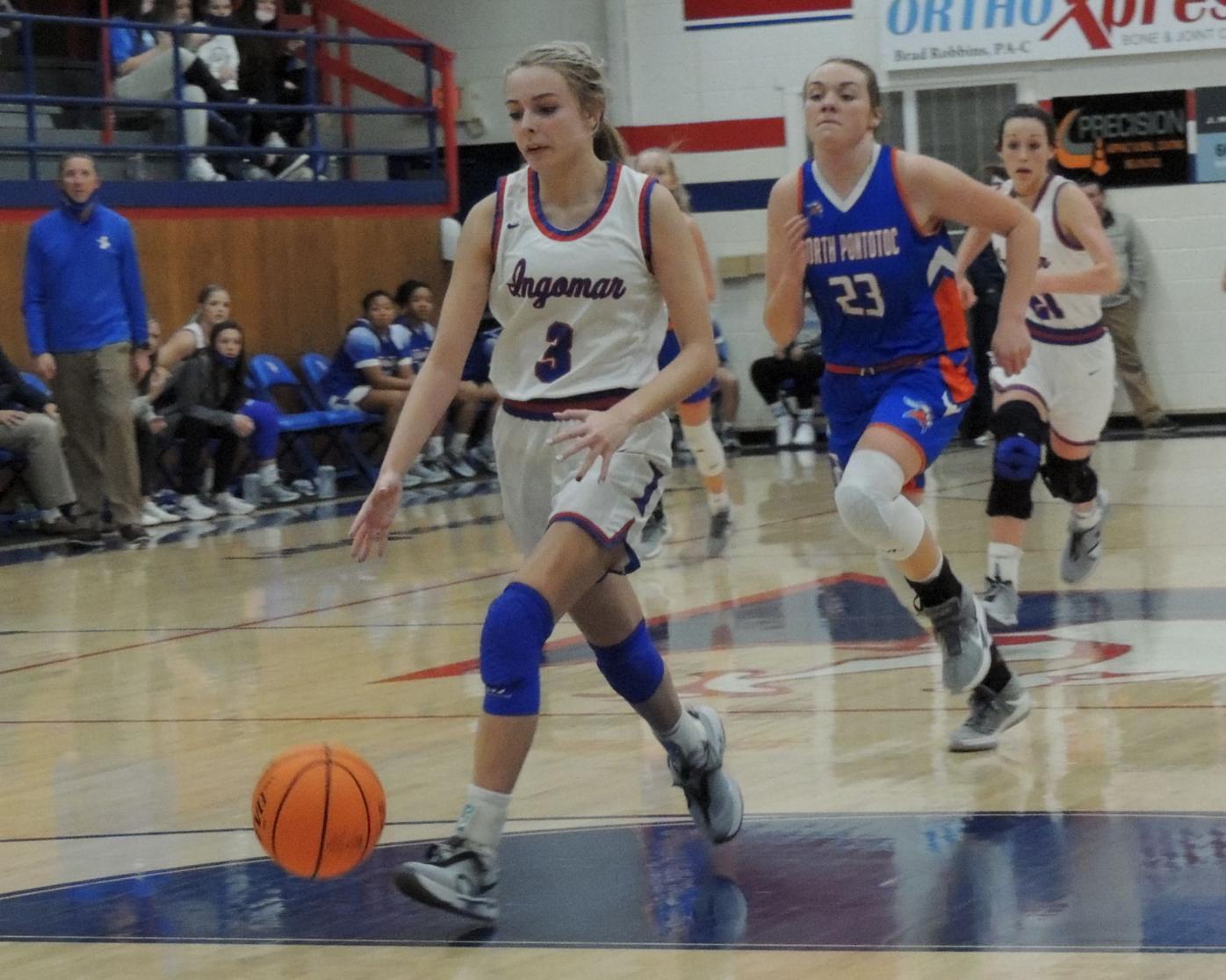 Ingomar's Lexi Campbell (3) drives down the lane for a layup as North Pontotoc's Maddie Gueirin defends. 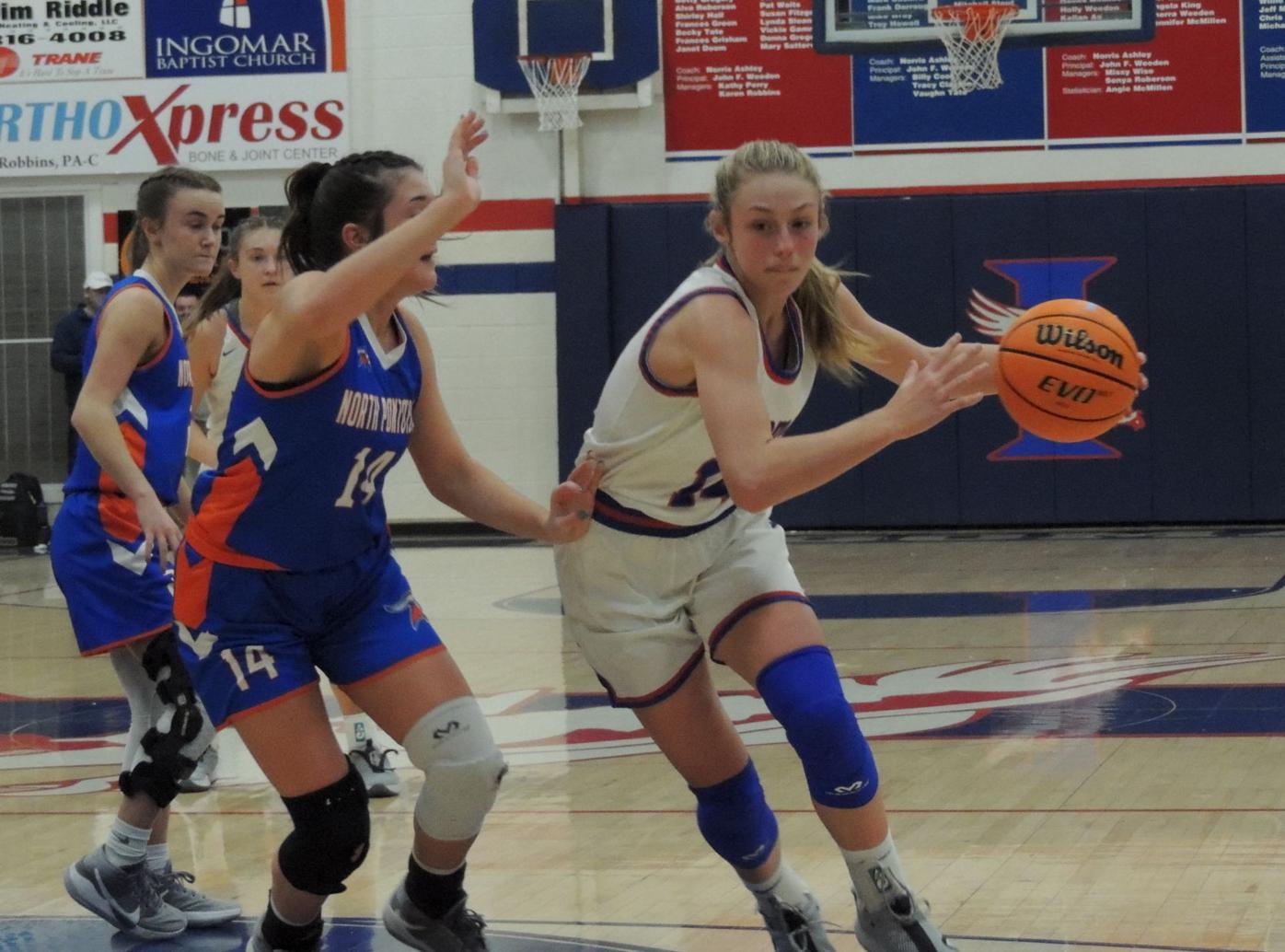 Ingomar's Eli Reed (14) moves along the baseline looking for an opening against North Pontotoc.

Ingomar's DJ Beard (22) goes up for a shot over North Pontotoc's Ty Roberson.

Ingomar's Lexi Campbell (3) drives down the lane for a layup as North Pontotoc's Maddie Gueirin defends.

Five points from Eli Reed, including a 3-pointer, kept the Falcons close in the opening quarter. They trailed 11-7 heading into the second period.

“To start with we couldn’t make a shot. We had some good looks, some uncontested looks, some shooters shooting in-rhythm shots … and just didn’t make ‘em,” Ingomar coach Jonathan Ashley said. “Our flow on offense is kind of off. I hope we can figure that out going into division play. We need to take what they give us instead of forcing things.”

Ingomar (15-4) looked to its defense to get the shots falling. DJ Beard opened the Falcons’ 19-0 run with a steal and a layup. In all, six players scored in the spurt that gave the home team a 26-11 lead.

Breyden Bell added a 3-pointer in the run and Tyson Smithey scored eight of his 13 points in the quarter, as Ingomar rolled to a 30-15 halftime lead.

“I thought we played pretty good defense the first half,” Ashley said. “If you go the first four or five minutes of the game without scoring and still have a lead at halftime, you must be defending decent. We did a good containing (North Pontotoc’s) Ty Roberson the first half. He’s ultra talented.”

Roberson scored all 19 of his game-high points total in the second half for the visiting Vikings. Jordan Meaders added 11 for North Pontotoc (6-6).

The Falcons, behind two 3-pointers by sophomore guard Adin Johnson, responded with a 10-0 run to take a 50-39 lead into the final quarter.

Spencer High, Zach Shugars, Smithey, Johnson and Bell all connected on 3-pointers in the fourth quarter for the winners. Shugars finished with a team-high 15, Johnson 11 and Bell 10.

“Adin, Breyden, Tyson, Zach can all make them out there,” Ashley said. “Spencer is a guy who doesn’t really shoot out there, but he’s a good defender. When he gets the opportunity out there, he shoots a high percentage.

“Adin is working hard for us making shots. We know he can play down there on offense. His effort level on defense is where we need it to be. He makes us different when he plays that way.”

Maddie Gueirin scored 15 points and Shamiah Hadley added 10 to lead the Lady Vikings (9-2) to their second win this season over Ingomar.