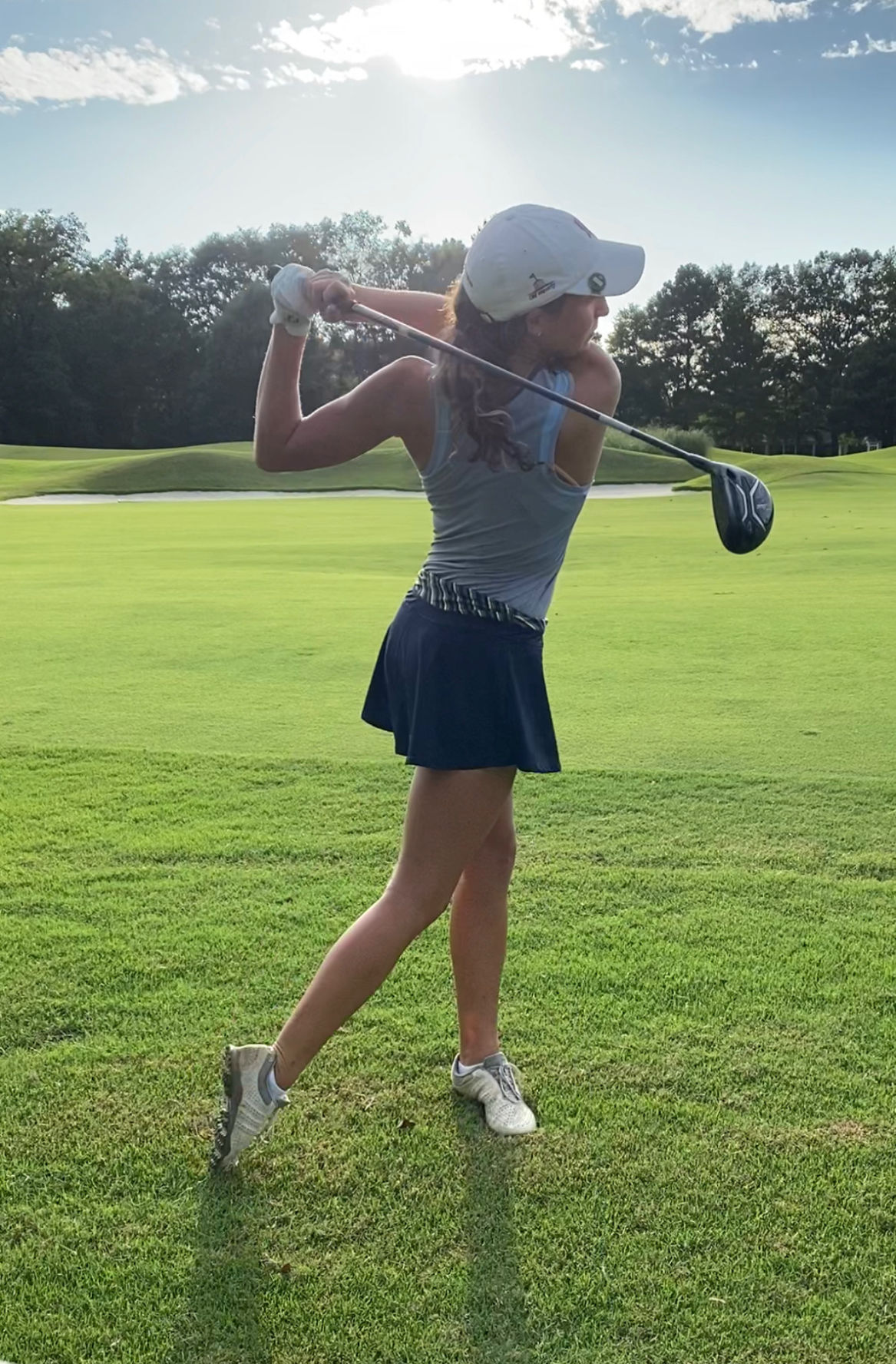 Caroline King follows through on this drive down the fairway. 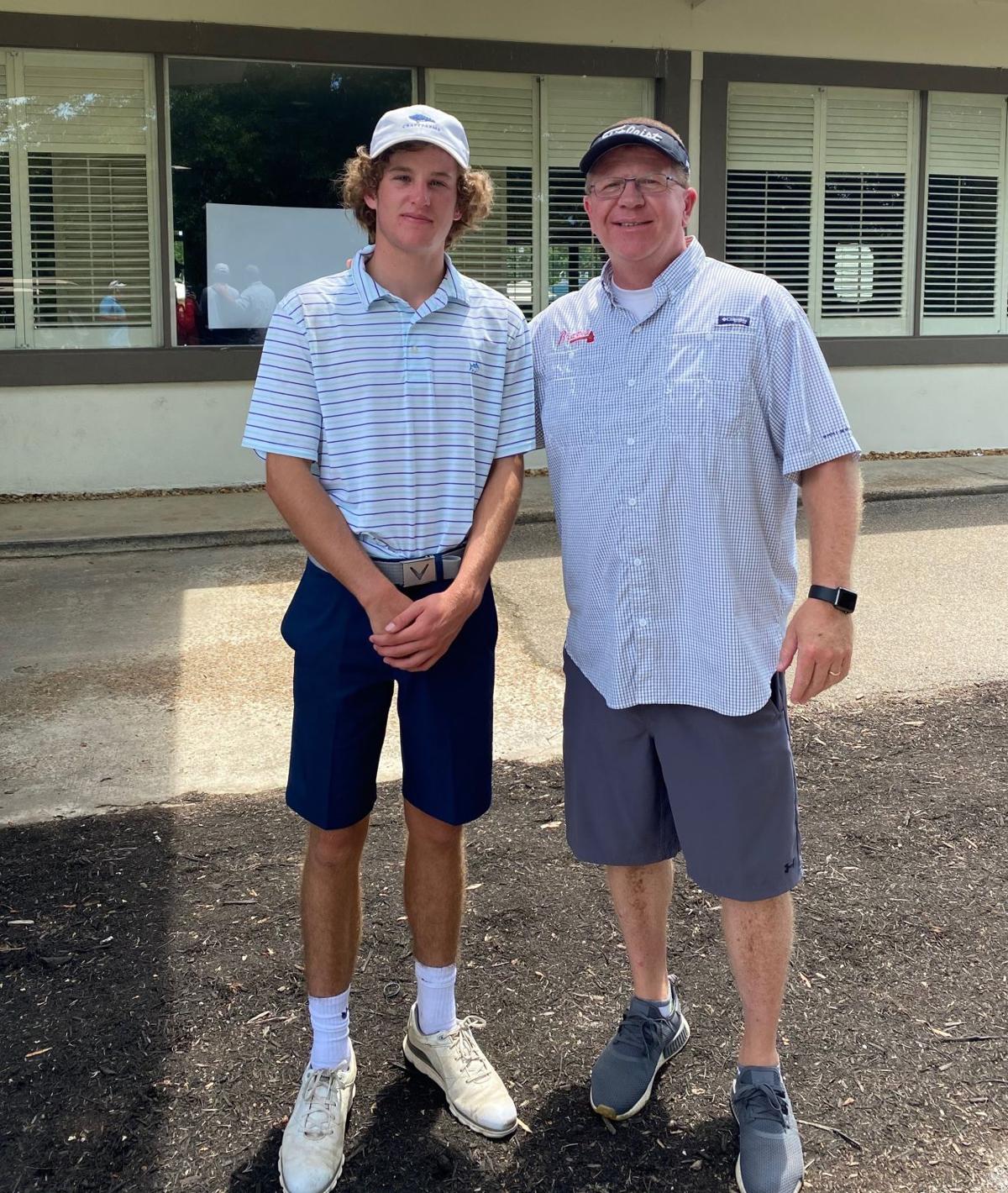 Andrew Fennell and Shane Sanderson get together after a round a golf this year.

Caroline King follows through on this drive down the fairway.

Andrew Fennell and Shane Sanderson get together after a round a golf this year.

NEW ALBANY - New Albany Golf teammates Andrew Fennell and Caroline King have been working on their game this summer on the Coca Cola Junior Golf Tour.

The duo saw their spring high school season come to a sudden halt with the coronavirus shutdown that affected all local spring high school sports. However, the Coca Cola tour has given them a bit of a consolation with its highly competitive circuit and players.

Fennell and King shared their thoughts on the high school season and the disappointment that came with it.

"It was really unfortunate to see the season canceled," Fennell said. "The team had been working hard everyday preparing for state, but the hardest part was I truly believe we had a legitimate shot to win state this year and I think I could have placed in the top 3 individual. Since they canceled the season I’ve just been preparing for senior year trying to go out with a state championship."

"I was really looking forward to this season because I though we would compete well at state," King said. "I was also excited to play with my sister Lucy and see how she would do as an upcoming 7th grader."

"Last season's cancellation really hurt our team," Sanderson said. "Both the boys and girls were anxious to get back to State and see what we could do. The girls had two players returning and I know they would have been right there in the mix of things. The boys were all back and couldn't wait to get back.

"We got a lot of rain and some cold weather last fall/winter, but we practiced through the majority of it. I was really proud of their step towards better practice habits and their maturity towards the game. We got in two matches before the shutdown. We played great - won both matches. Couldn't have asked for a better start. We were ready and excited."

Fennell and King offered differing viewpoints on how their high school season began.

"Well, we only got two matches in before the season ended and I was playing well," Fennell said. I went 38 in both matches and won both of them. So my confidence in my game was there and I was excited for the upcoming tournaments and state."

"I had just come off of soccer season and still trying to find my rhythm, but before I knew it the season was cancelled," King said.

Sanderson felt like his team was ready to take the next step and be in the mix for a state title.

"I expected both teams to make it back to State," he said. "I believe our boys division winner might just also become the team to win State.

"We were moved into division with Corinth who was looking to three-peat. We were ready for the challenge. The girl's returned our top two scorers and with one being a senior (Cassidy Ketchum), they were excited to see a great finish.

King and Fennell have been pleased with their play on the Coca Cola tour so far and shared their thoughts about how the summer has gone.

"I had a lot of second place finishes where I couldn’t get over that hump to reach first," King said. "However, this was the first time I was able to play on the tour and I feel like I learned a lot about the game and myself."

"I’ve played fairly well this summer in the Coca-cola tour," Fennell said. I qualified for the championship at Starkville Country club which was of my goals at the beginning of summer.

"So far my best round was at Elm Lake golf course in Columbus. I had a feeling I would play good there, it’s where state has been the past two years so I knew the course and how to play it.  Everything went as planned from tee to green and I went on to shoot a 74 and won the tournament."

Both players feel that playing the Coca Cola tour has been beneficial to improving their golf game which should translate into success for their high school season in 2021 as well.

"This really gave me insight on how to handle myself outside of a practice and in more pressure situations," King said.

"Playing in the summer helps me stay in that competitive mindset just trying to go out there and win every time I play," Fennell said. "In my opinion the competition level is a little higher in the summer so I know I have to play well to win. And then I play a lot in the fall, so by the time spring comes around I’m prepared for the season."

Sanderson sees the tour as a huge asset for his golfers and hopes to see more participation from New Albany players next season.

"The Coca-Cola Tour is an awesome opportunity to get better," Sanderson said. "There is no substitution for competition. If you want to get better, you have to get out and play against golfers you don't normally play. The Coke Tour does a great job running the tournament and playing some great area courses.

"I'm a big fan, both of my daughters played it and I know it helped their game. It's a great extension to our season. I wish we had more of our current players play and also more of our future golfers. They have divisions from ages 6-18. Maybe next summer New Albany will have a lot of representation on tour."

Both Fennell and King have been able to play a lot more golf because of the coronavirus and its effects on gatherings and such.

"The virus has not slowed me down to be honest," Fennell said. "My playing partner, Owen Everett and I have been trying to play at least five days a week since schools let out. But we have been taking precautions and doing what we can do to stay safe."

"The coronavirus helped me in this way because I didn’t have much else to do besides play golf," King said. "So I was able to work on my game more with this free time."

King and Fennell have both gleaned some life lessons from the pandemic and the canceled spring golf season and shared how it has impacted them.

"Patience, I have had to take everything at a slower pace than what I’m used to," King said. "Instead of getting up and going as much I have been able to take a break and focus on the important things in life."

"The biggest thing I’ve learned is something my family has always told me is that you have to control your emotions each and everyday on the course because golf is a hard sport it’s not that easy to keep it in your head," Fennell said. "I think coach Sanderson and my family can all tell you I’ve finally learned to do that."