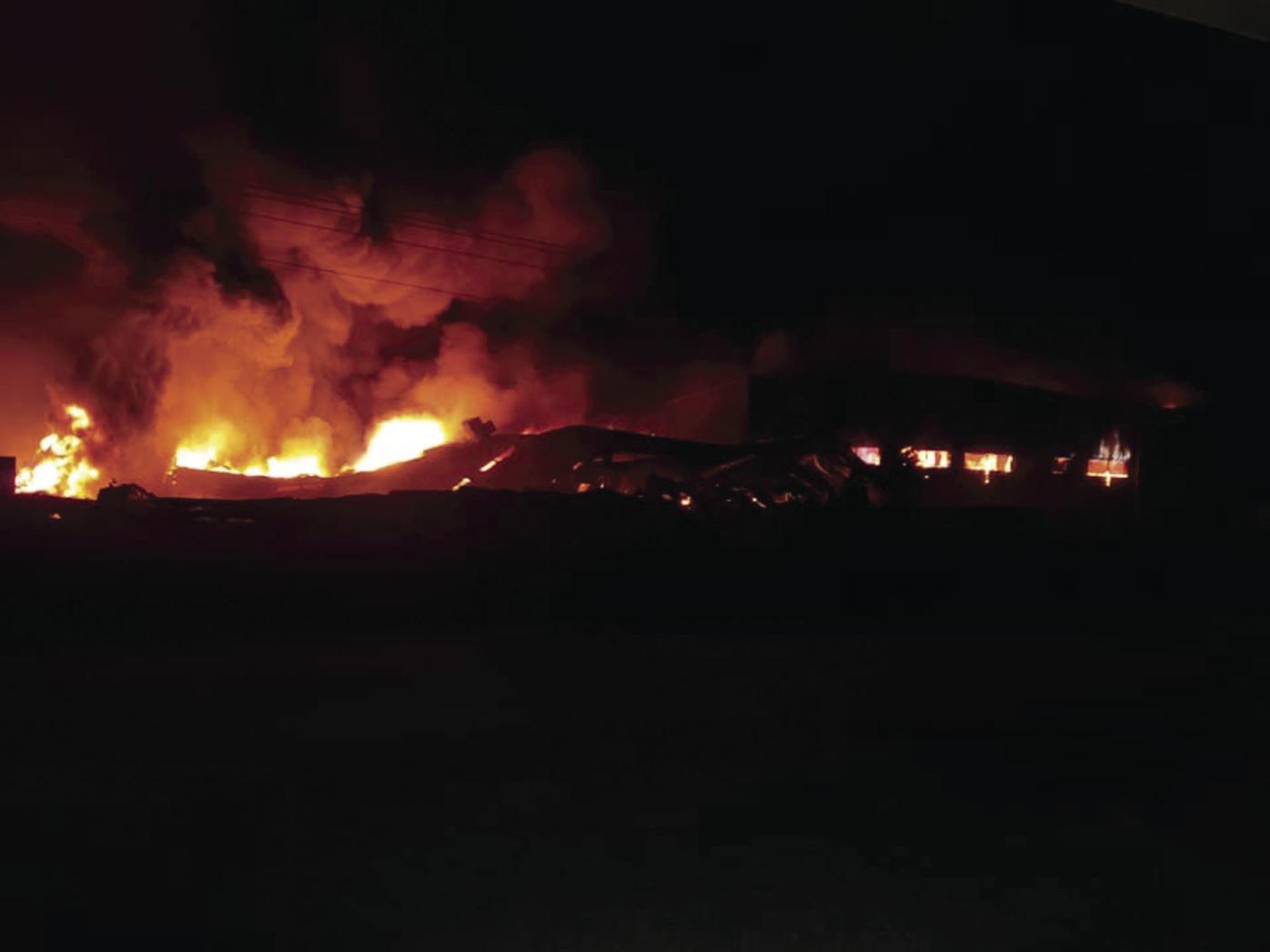 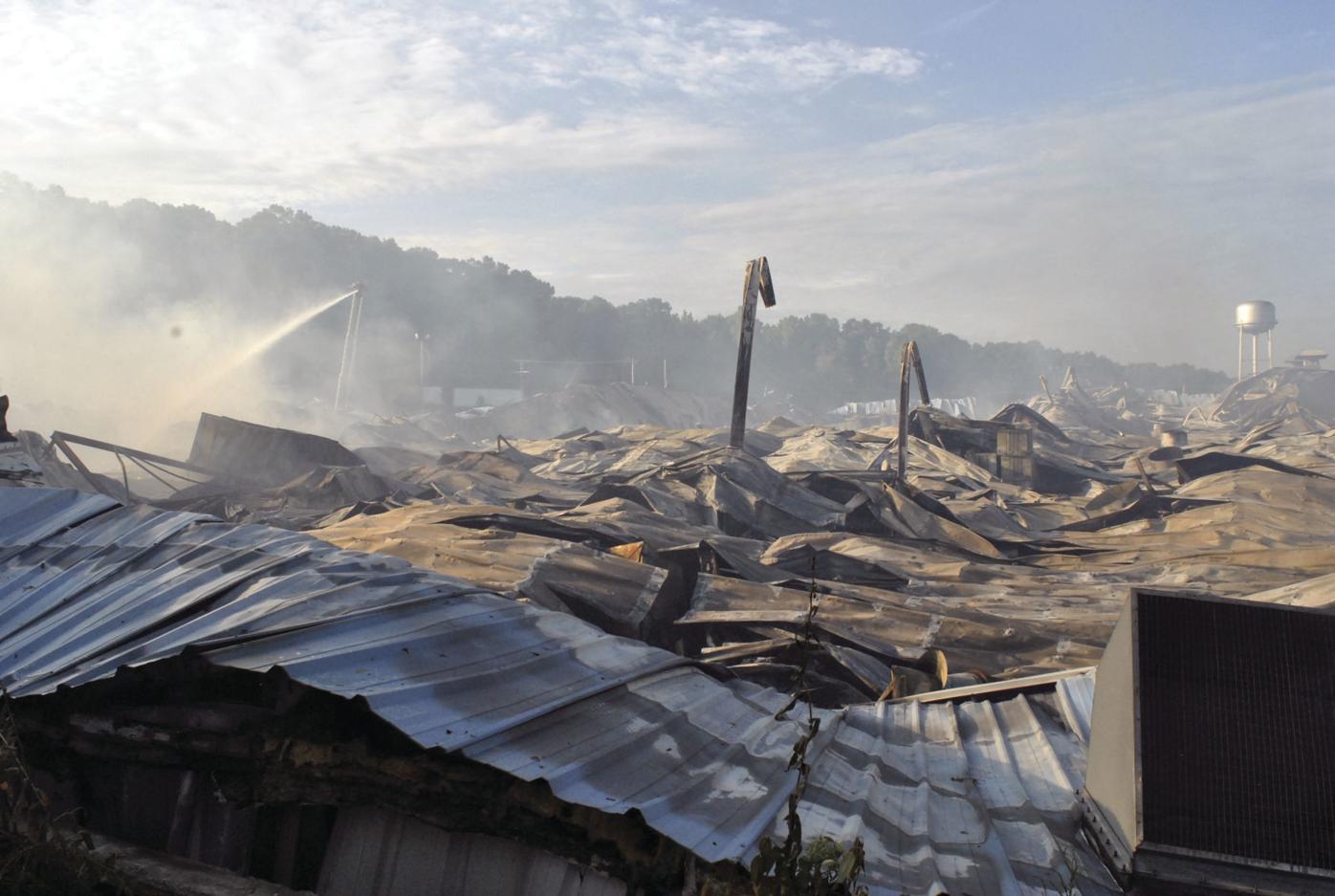 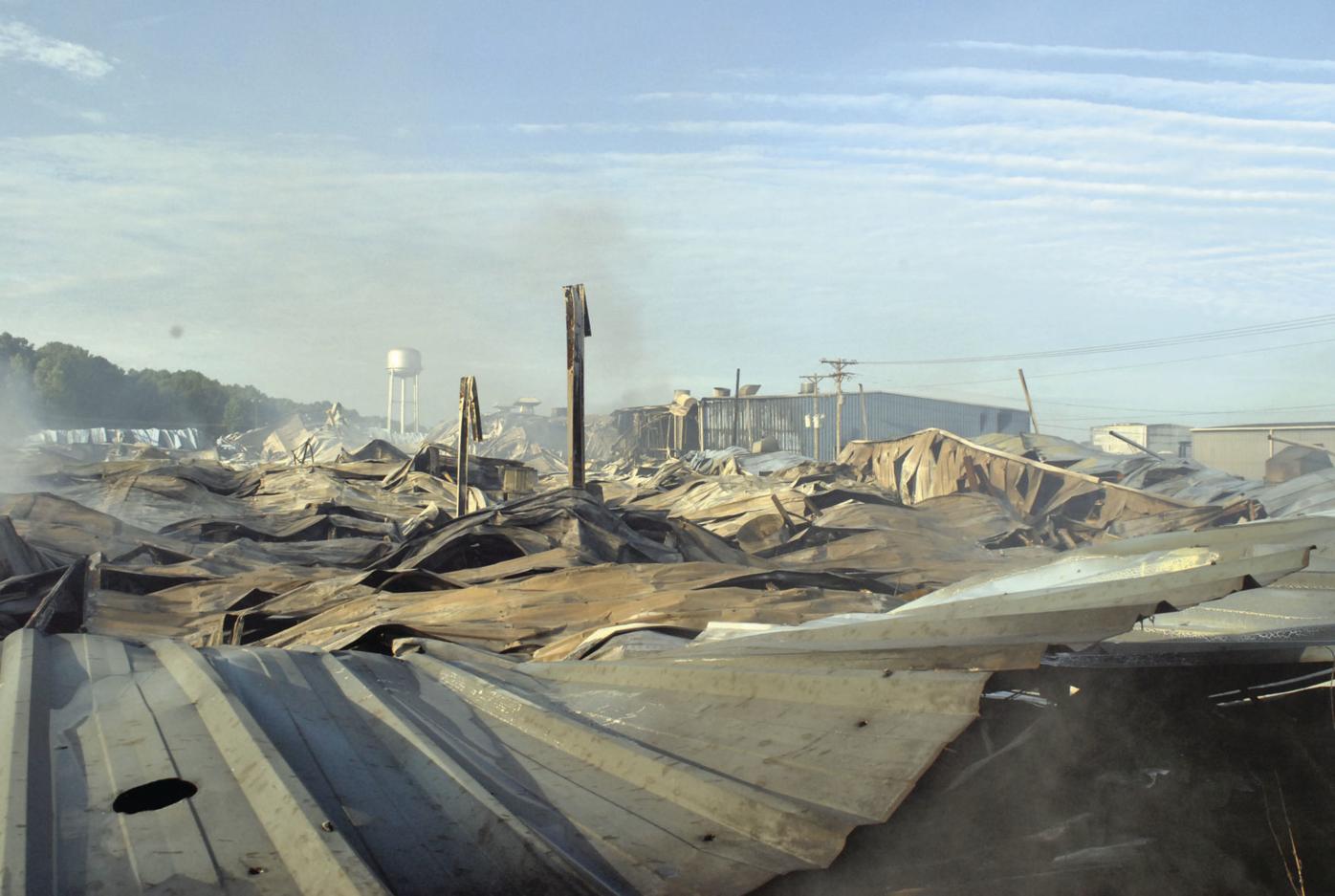 Essentially nothing remains of the building but the partially-melted metal roof. 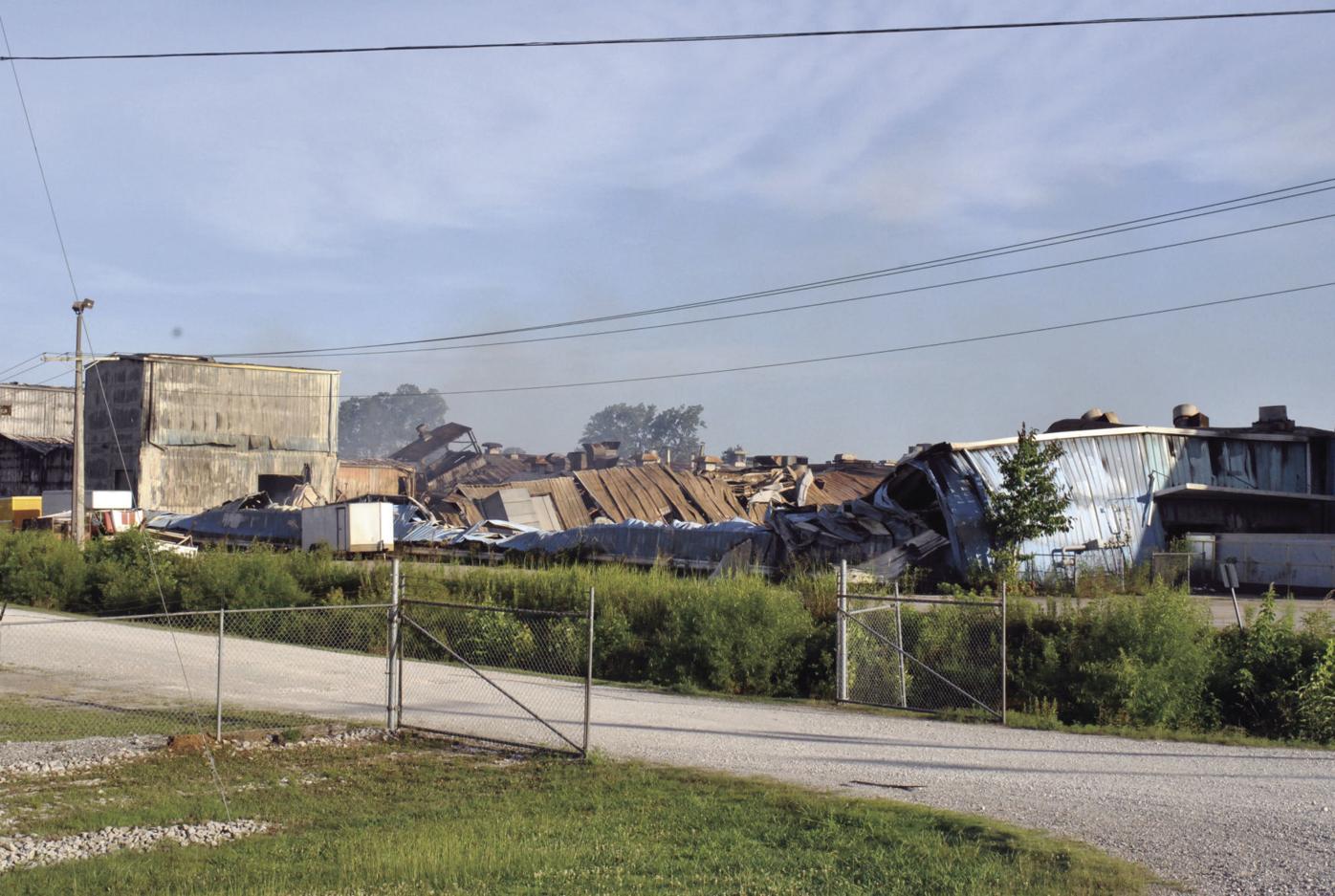 The two towers that once housed the giant extrusion presses remain but are burned out.

Master-Bilt was using this rear part of the building as storage for cabinet refrigeration units and records. 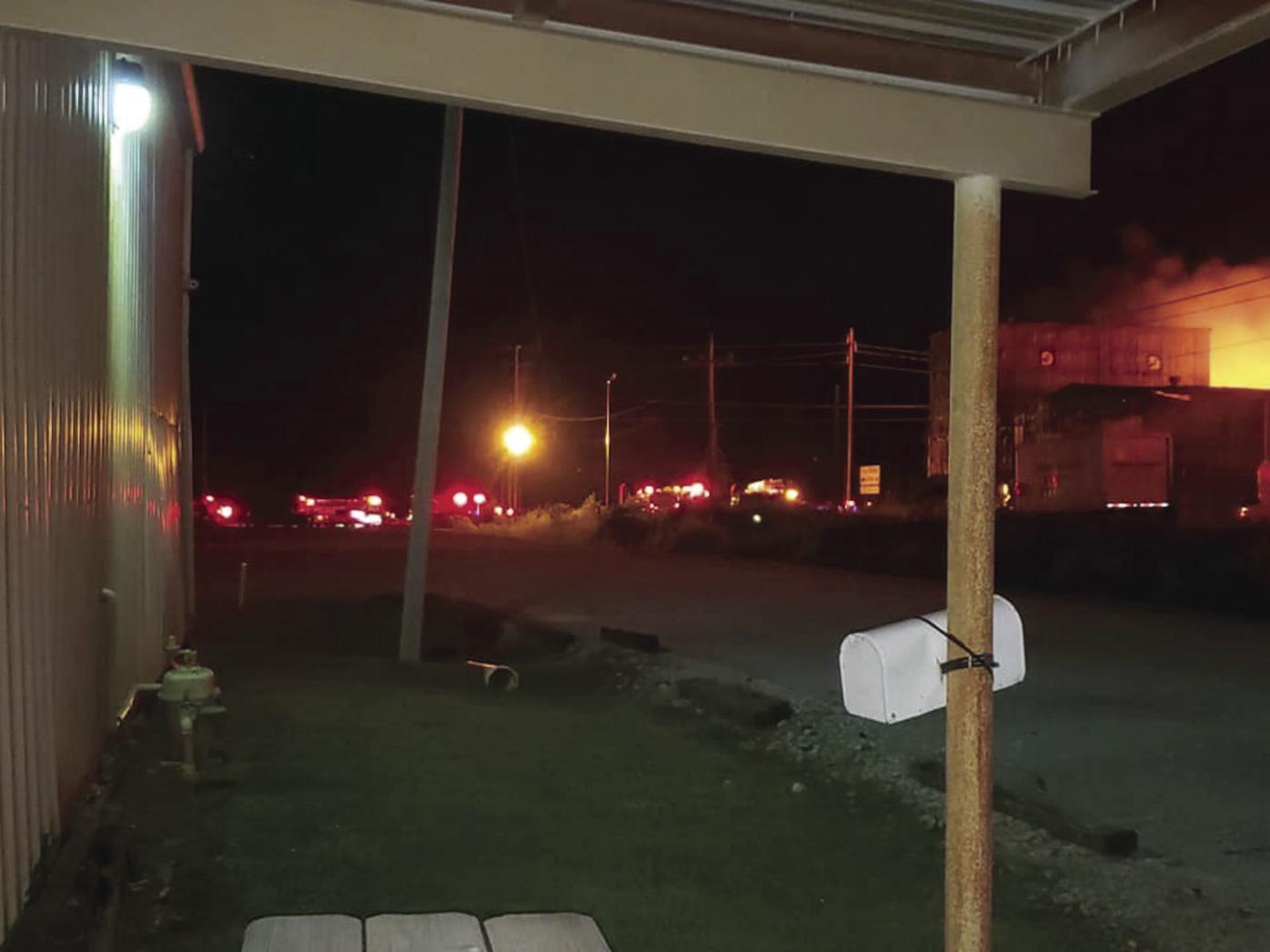 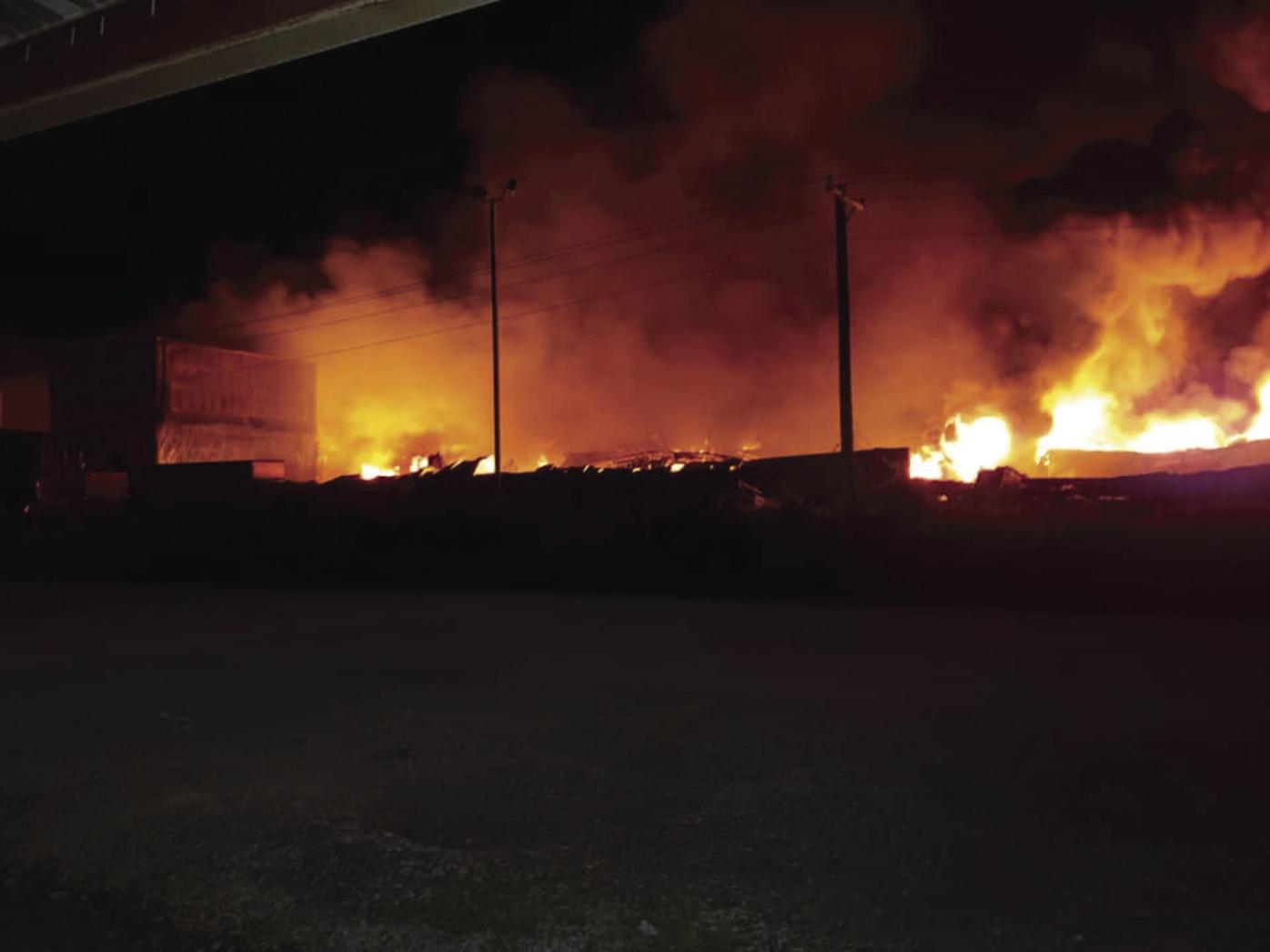 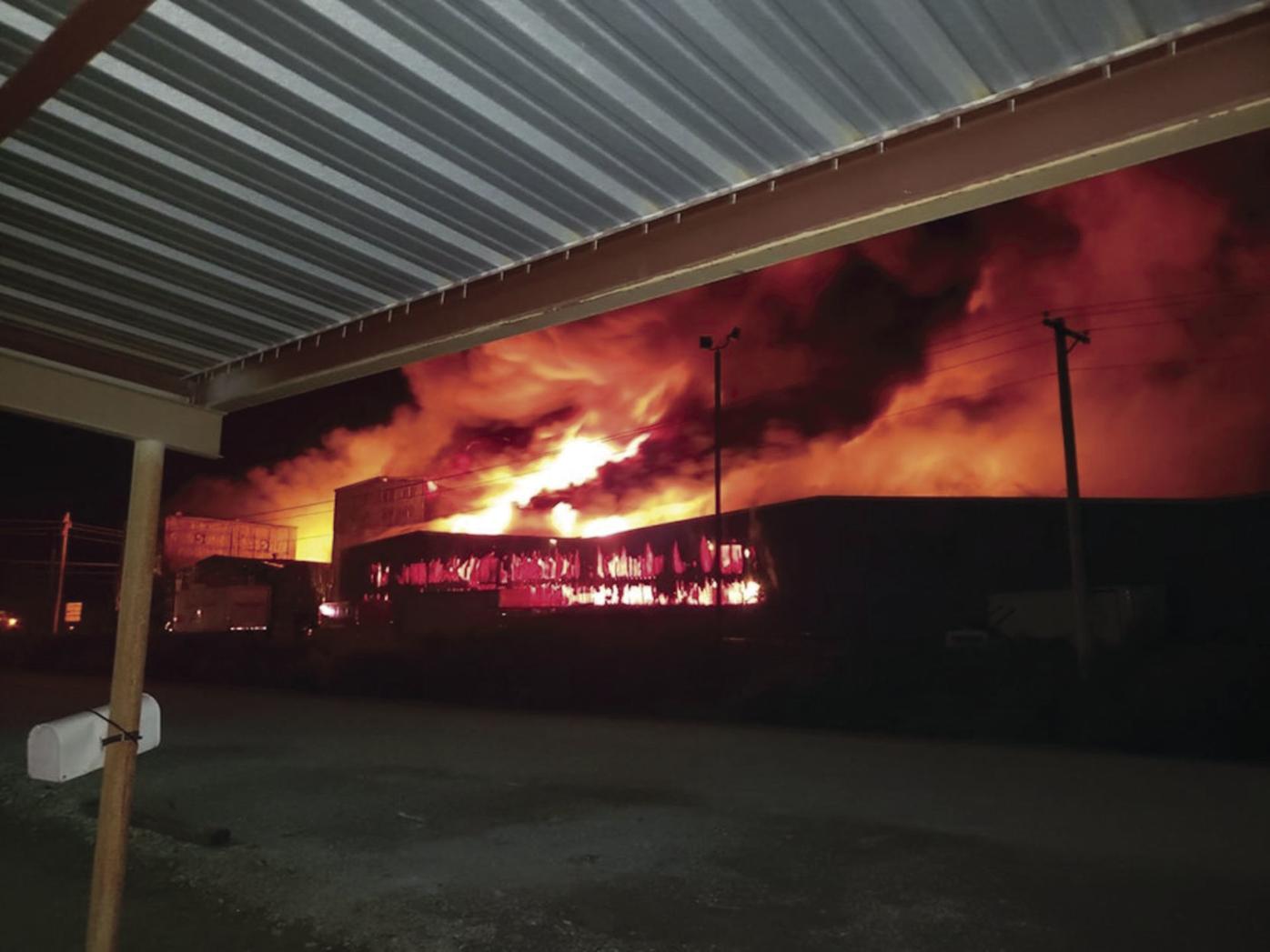 Essentially nothing remains of the building but the partially-melted metal roof.

The two towers that once housed the giant extrusion presses remain but are burned out.

Master-Bilt was using this rear part of the building as storage for cabinet refrigeration units and records.

The fire was reported about 1:30 a.m. and engulfed the entire building. When the fire was first seen flames were already coming through the roof and out building openings.

By sunrise most of the fire was out with only twisted metal roofing remaining but all city and county departments continued to pour water on the smoldering ruins, shuttling tanker trucks back and forth for refills.

The fire departments were expected to be at the scene all day.

There was no immediate cause of the fire identified and officials said it will be under investigation.

No one was reported injured but an ambulance was at the scene in case of any heat- or smoke-related health problems.

The building was constructed in conjunction with the state’s Balance Agriculture With Industry program that started in the late 1950s and first housed NIMCOR, or National Impact Metal Corporation, which later became Piper Industries and then Metal Impact when the company moved to new facilities on Sam Tom Barkley Drive.

More recently, the front part of the 14-acre property has been home to Thomas Wholesale Furniture, owned by Steven Thomas, who has been an Ashley Furniture dealer. Thomas also had a retail store, Tallahatchie Living, in downtown New Albany for awhile.

The back part housed Master-Bilt’s inventory of newly-manufactured refrigeration equipment and some company records. It was reported that sales had been sufficient that the company was working hard to fill orders. The cabinet and walk-in production areas were unharmed.

“Standex Refrigerated Solutions Group is saddened to announce that a major fire destroyed the New Albany, Miss. warehouse early Wednesday morning, where Master Bilt leases warehouse space.  The fire apparently started in a neighboring business and quickly spread, totally consuming the warehouse.  No employees were in the warehouse at the time and there were no injuries reported.  The cause of the fire is currently under investigation.

“The fire has not interrupted manufacturing significantly and we will return to full production tomorrow. We are currently receiving calls from our corporate neighbors and vendors offering assistance.  Our employees are the best in the world and their work ethic is so strong that we should be able to quickly replace the lost inventory.

“There are 16 warehouse employees whose jobs are affected and it is likely they will be either reassigned or back at their regular job within days.

“As a part of the Standex Refrigerated Solutions Group, we have manufacturing facilities at other locations around the country who can assist if necessary with inventory replacement.

“To our employees, customers, representatives, dealers, corporate neighbors and to the first responders in New Albany... we thank you for your hard work and dedication to help us get past this very difficult time for our corporate family.”

Details on future plans will be forthcoming.

The back part of the building used by Master-Bilt is owned by Jasper Creek LLC of Tupelo and principal Randy Cobb, according to company personnel.

The front part of the building may be owned by Union County because of the long-forgotten original B.A.W.I. funding but officials were not sure Wednesday afternoon and were trying to determine actual ownership.

Storm’s result in Union: Most roads under water, stranded motorists, but no reported injuries

Planning under way for the Tallahatchie River Run Sept.25