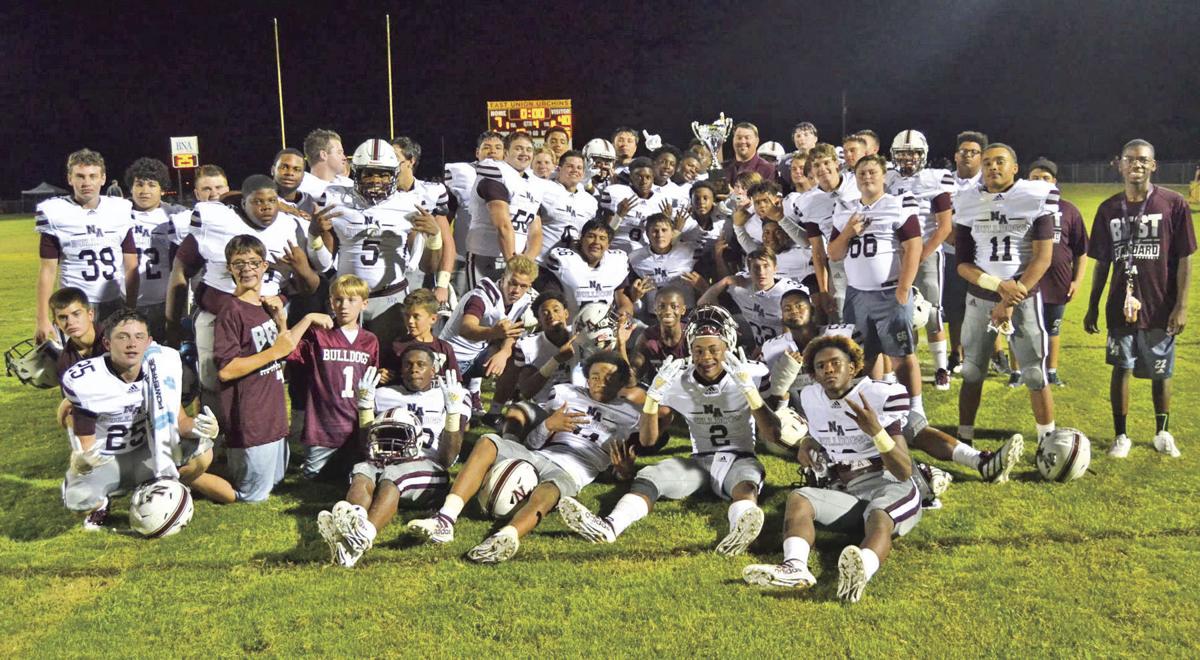 The New Albany Bulldogs will retain possession of the EUNA Cup from their 2019 win over East Union. The teams will not meet this season since their rivalry game was the season opener for both teams and the MHSAA canceled the first two games of the season for all football teams in Mississippi. 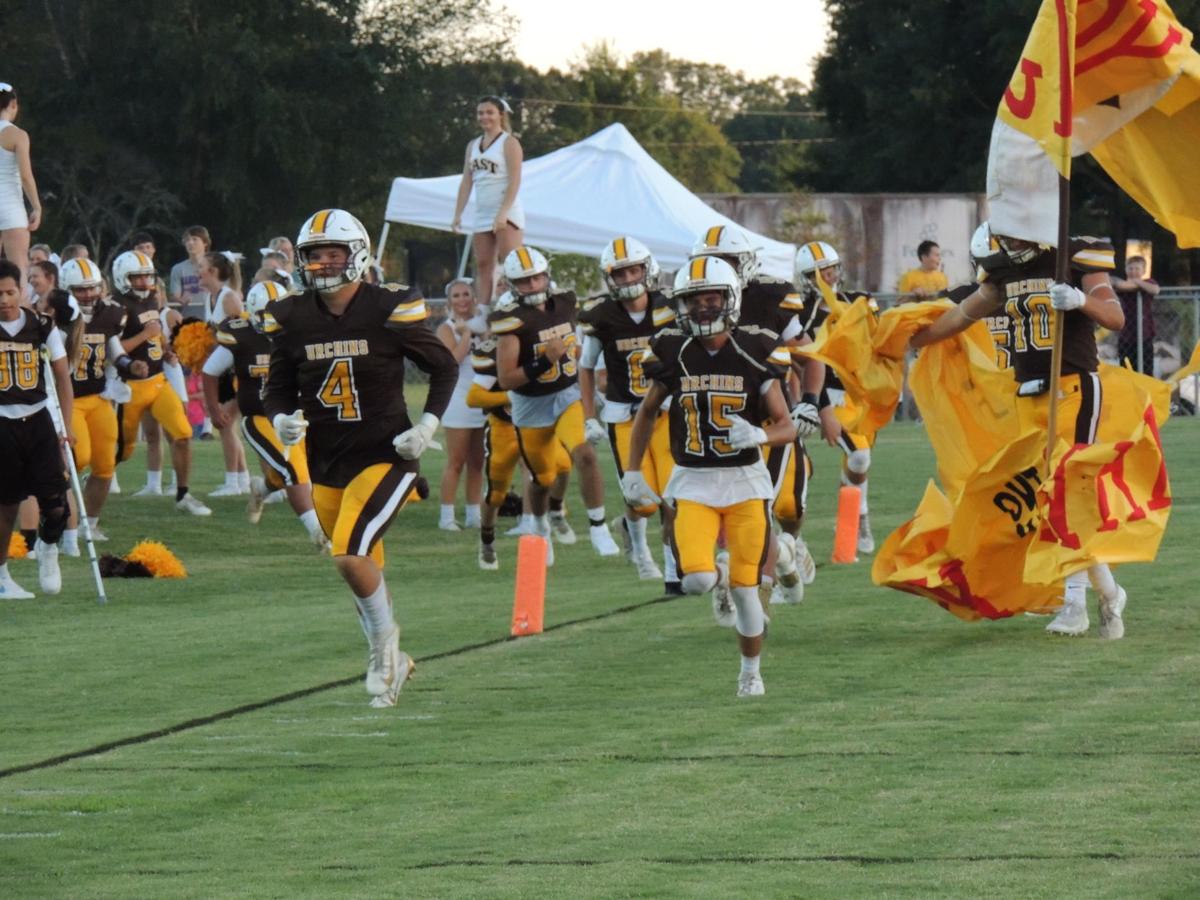 The East Union Urchins take the field in 2019 prior to their first-ever regular season meeting in football with Myrtle. The Urchins won the contest last season over the Hawks at East Union. The teams will not meet this season since the game was scheduled for week two and the MHSAA canceled the first two games of the season for all Mississippi prep football teams.

The EUNA Cup game that pitted New Albany versus East Union was one of the contests that was lost in 2020 due to the football season backing up two weeks.

The Myrtle versus East Union rivalry game in football will not be played in 2020 since the first two games of the season have been cancelled. The teams were scheduled to play in week two.

The New Albany Bulldogs will retain possession of the EUNA Cup from their 2019 win over East Union. The teams will not meet this season since their rivalry game was the season opener for both teams and the MHSAA canceled the first two games of the season for all football teams in Mississippi.

The East Union Urchins take the field in 2019 prior to their first-ever regular season meeting in football with Myrtle. The Urchins won the contest last season over the Hawks at East Union. The teams will not meet this season since the game was scheduled for week two and the MHSAA canceled the first two games of the season for all Mississippi prep football teams.

The Mississippi High School Activities Association (MHSAA) recently had a meeting of their Executive Committee to discuss the fall sports seasons. The committee offered the following proposals for now with possible revisions to come depending on the circumstances surrounding the coronavirus.

Here is the press release from the MHSAA Executive Committee:

The MHSAA Executive Committee voted Tuesday to delay the Fall sports calendar two weeks due to the COVID-19 pandemic.

Practice for football can begin August 17. Scrimmages between schools are allowed beginning August 28th with games starting September 4th. The football playoff and championship dates are unchanged. Games scheduled for the first two weeks of the season will not be made up.

“The board felt these changes will give all of us more time to try to get back into the routine of school,” MHSAA Executive Committee President Kalvin Robinson said. “There are going to be many challenges — ones we’re anticipating and those we don’t even know about yet — in returning to on-campus learning. It’s going to be different than what we’ve experienced in the past. Hopefully pushing back the start of the Fall sports seasons will help make that transition a little smoother for everyone involved.”

MHSAA Executive Director Don Hinton supports the two-week delay as well as the board’s reasoning behind it.

“We believe this is the right decision at the right time,” Mr. Hinton said. “As we’ve said since last spring, this is an unprecedented and rapidly changing situation where new information can and will alter plans and schedules at any time.

“We’ve been in contact with officials from the Governor’s office and the Mississippi Department of Education. We’ve talked with sports administrators from Mississippi universities and community colleges as well as leaders from the National Federation (NFHS) and our neighboring state associations. All of us are looking for the best way to navigate these challenges and obstacles, but each us has our own challenges.

“For example, there’s been talk about the MHSAA flipping the fall and spring sports seasons or just moving fall sports — and specifically football — to the spring. But those changes would create an entirely different set of challenges and logistical issues, including an overlap with athletes, coaches and game officials.

“As far as swapping the Fall and Spring seasons, we’ve heard from many coaches and administrators who feel it would be unfair to ask the coaches and sports cancelled in April to turn around and play with all the challenges we’ll be facing this fall.”

Despite those challenges, Mr. Hinton said the MHSAA will continue to make every effort to keep sanctioned sports and activities in place for the 2020-21 school year.

“We know how important these extracurricular activities are to the students, parents, families, schools and communities of our state,” Mr. Hinton said. “We’re staying optimistic and doing everything we can to move forward for the upcoming school year. We’re listening to and relying on the medical experts, government officials and school administrators who are working to manage this situation. This is something none of us has experienced before.”

Gazette coverage football coaches were contacted about their thoughts on the action by the MSHAA and all three coaches were encouraged by the proposal.

"We are all optimistic about the opportunity to play football and other sports this fall," New Albany football coach Cody Stubblefield said. "During these uncertain times I believe the MSHAA felt pushing the season back would give schools the best chance to reopen smoothly.

"While losing two games is not ideal, if we can play our remaining eight games on the schedule and complete in the post season I myself, the other coaches and most importantly our players, will be happy."

Myrtle football coach Jeremy Smithey echoed Stubblefield's sentiments and offered his observations for on how his Hawks would be affected.

"We are happy that MHSAA’s decision gives some hope for our kids being able to play this fall. With all of the rumors that were out there, some of them were becoming disheartened about possibly not playing. The kids are relieved to see that they are getting the chance to play, and they are visibly more excited since they heard the news.

"The delayed start is going to make us adapt our normal early season schedule. However, I see it as an opportunity to get more work in to prepare for the season.  It will help us make up for the time we missed in spring practice."

East Union football coach Todd Lott was also in agreement, but offered some questions that will probably arise should the season be played. Lott drew his questions from his years of serving as an athletic director.

"First of all, my hat’s off to the MHSAA for doing everything within their power to hopefully have fall sports this year. I certainly don’t envy them. They have been faced with some unthinkable circumstances.

"As far as challenges, practice is will not be an issue. We have been dealing with a “new normal” since June 1. I’m fairly certain that schools have gotten into a routine by now and will continue their routine as long as necessary.

The biggest challenge will be game day management. There are so many variables to account for.

• If fans are allowed, how do we go about collecting money?

• How will concessions work?

• How to we manage the pressbox situation?

• How will we need to mange the stands?

• Sideline management - How do we deal with hydration?

• How do we deal with equipment issues?

• How do we deal with injuries?

• How do we need to handle washing uniforms ?

These are just some questions off the top of my head. I’m sure there are many, many more issues that will have to be addressed."

New Albany volleyball coach Ashley Connolly led the Lady Bulldogs to the 4A state championship in 2019 and is just hopeful to get her 2020 team on the court to compete.

"I like that the MHSAA is at least giving us some hope of playing and not just cancelling it all together like some states are doing," Connolly said. "And I do foresee them possibly pushing it back some more or maybe limiting our games. As long as we have a season I will be fine with whatever they decide!!

"The only challenges I see for games are the ball, but that’s a quick fix by having multiple game balls at the scores table."

East Union cross country coach Nathan McLellen is hopeful his Urchins will just be allowed to compete this fall even though that might come with some restrictions in some form.

"While we would prefer not to have the delay, it does give us hope after working most of the summer that we will still have a season," McLellen said. "We have probably had kids run more miles this summer than ever before. It may be because they are bored, but they’ve worked really hard and deserve to compete if we can do so safely. With practice we’ve tried to let them know ahead of time what they are to do to prevent any gathering as a team. Our kids have done really well with this, but limits how much control I have on pace and effort.

"This fall I would not be surprised if we see a limit on the number of teams able to attend a meet, either by MHSAA or by the host school. We will deal with that as best we can. We just want our kids to compete."

More will be brought to light in August as to how the various fall sports will be allowed to practice and hopefully compete once the schools start back.