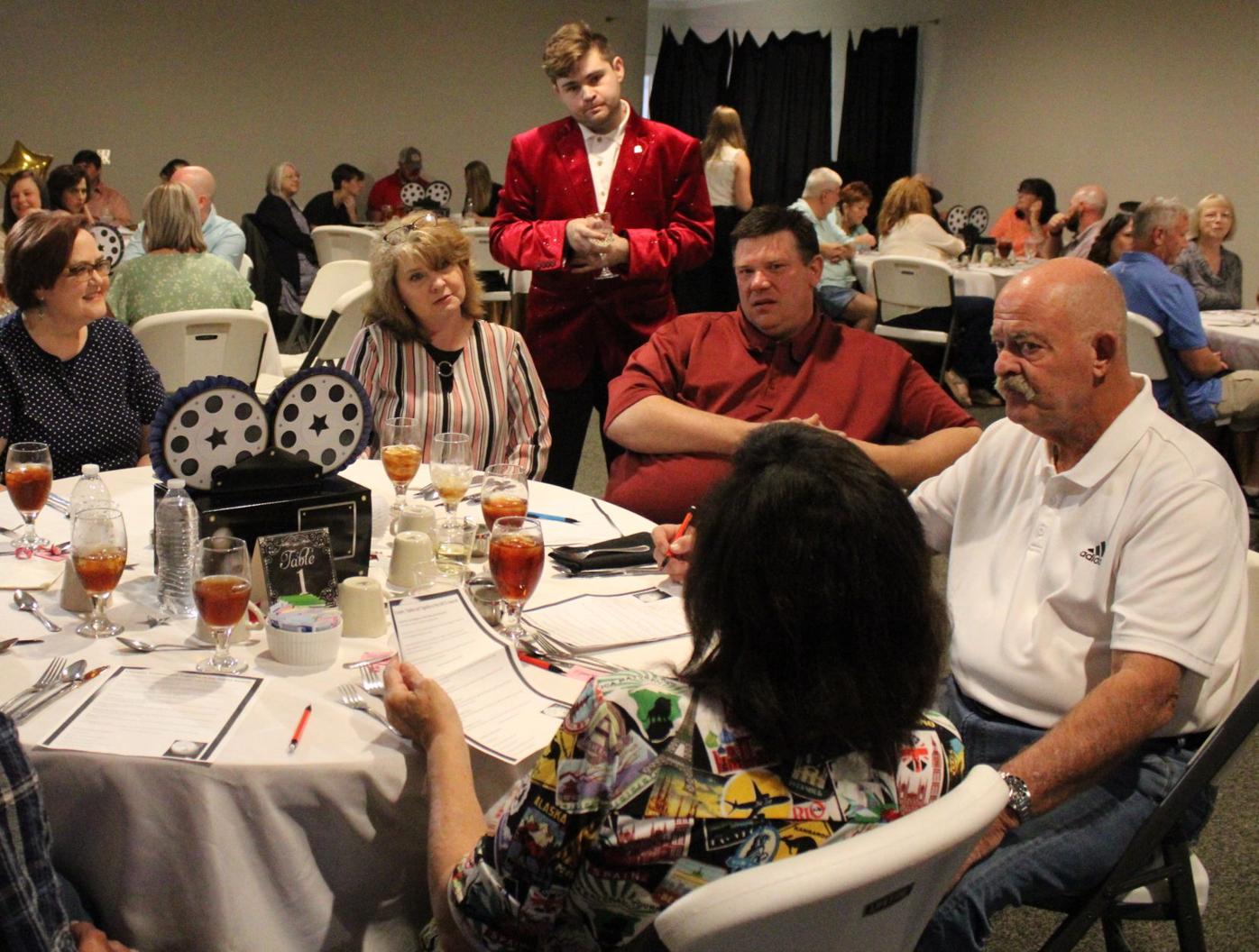 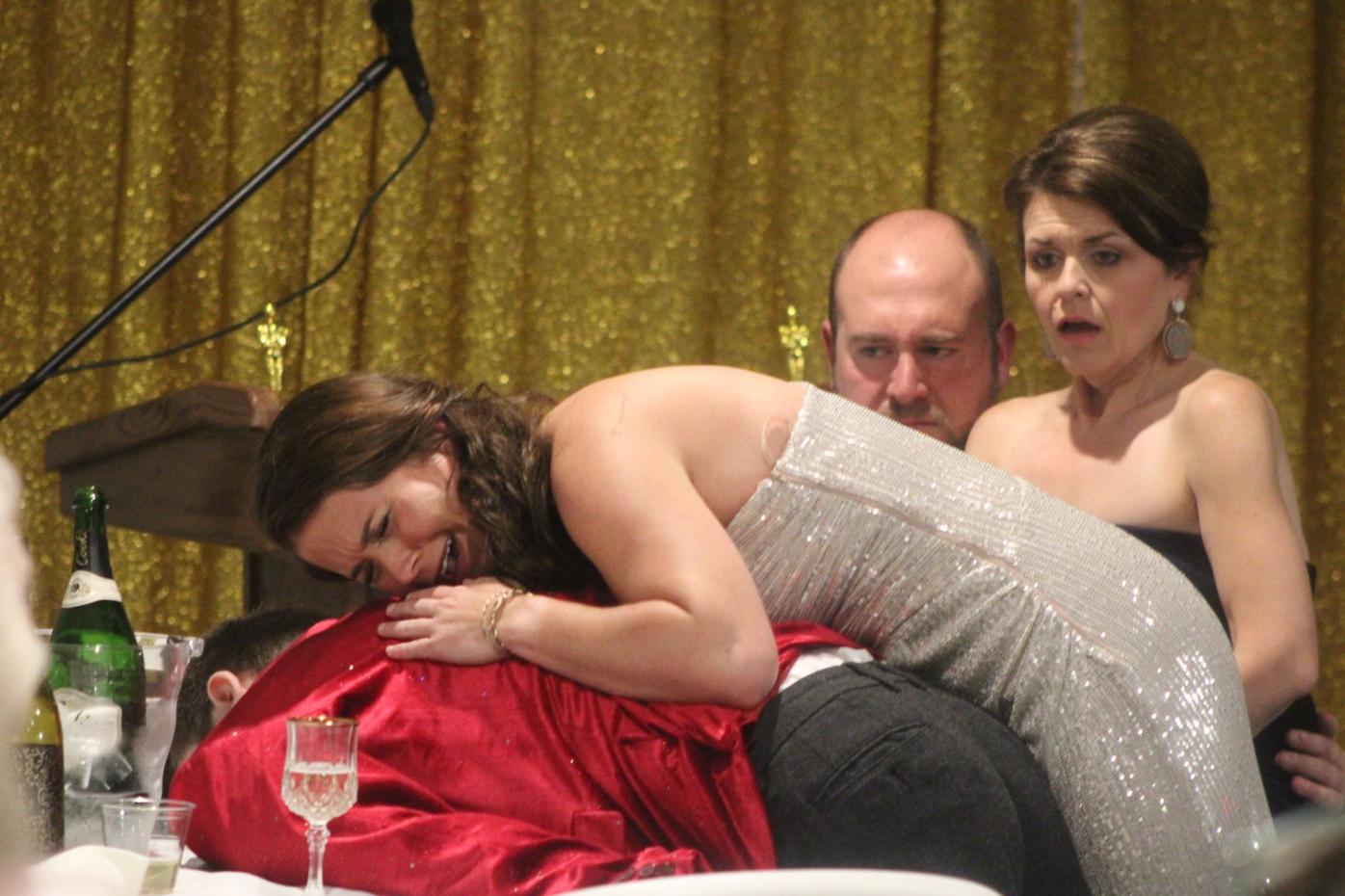 An emotional Crystelle Chandeliah (Carley Mahon) cries over the body of stuntman Ivor Sixpack (Matthew Darling) after he collapses at the head table Saturday night during the DAFTA Awards in New Albany. Looking on in shock are actress Nicole De’Limelite (Mary Beth Muncie) and master of ceremonies Ben Pozin (Drew Horn). 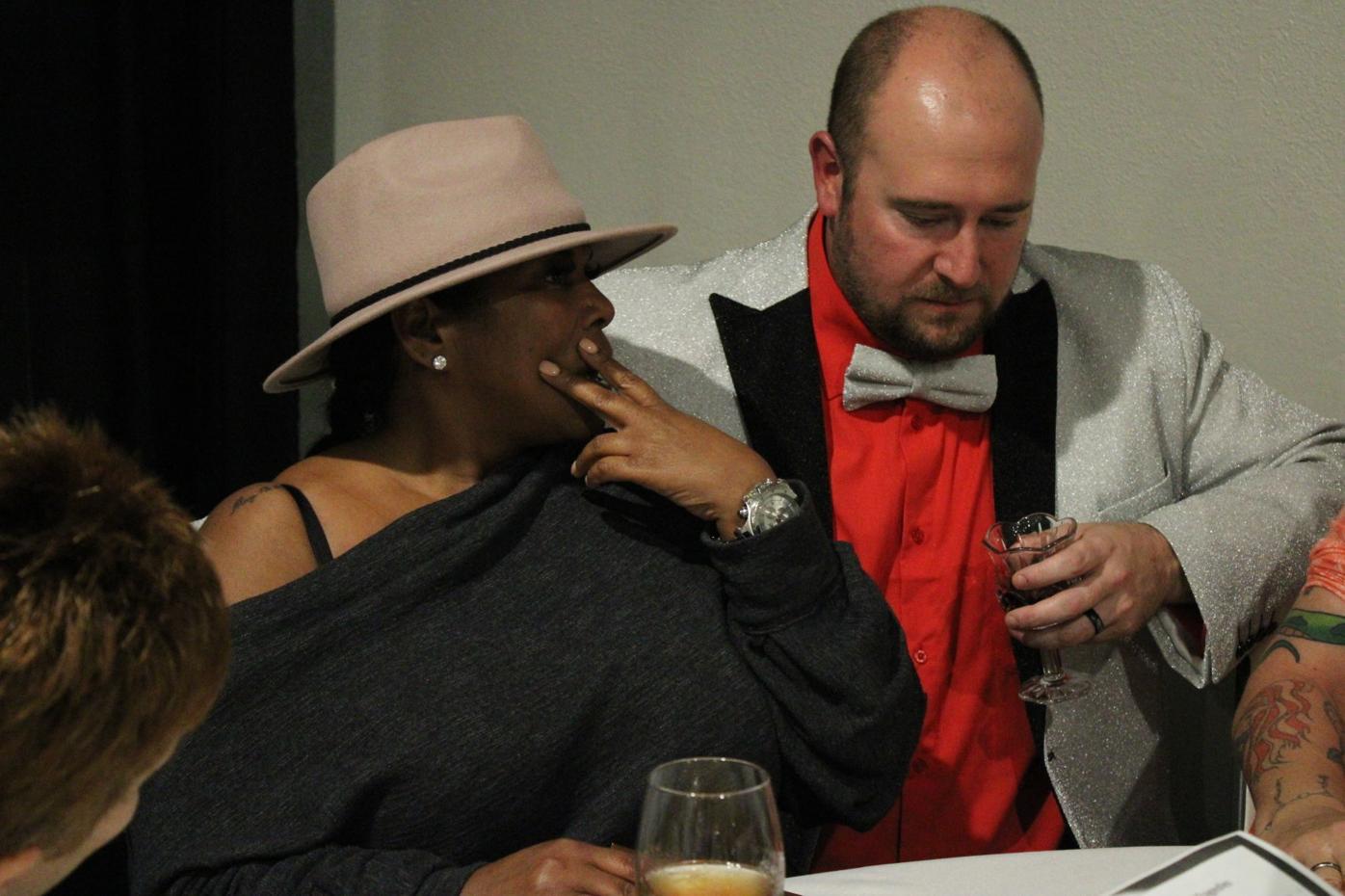 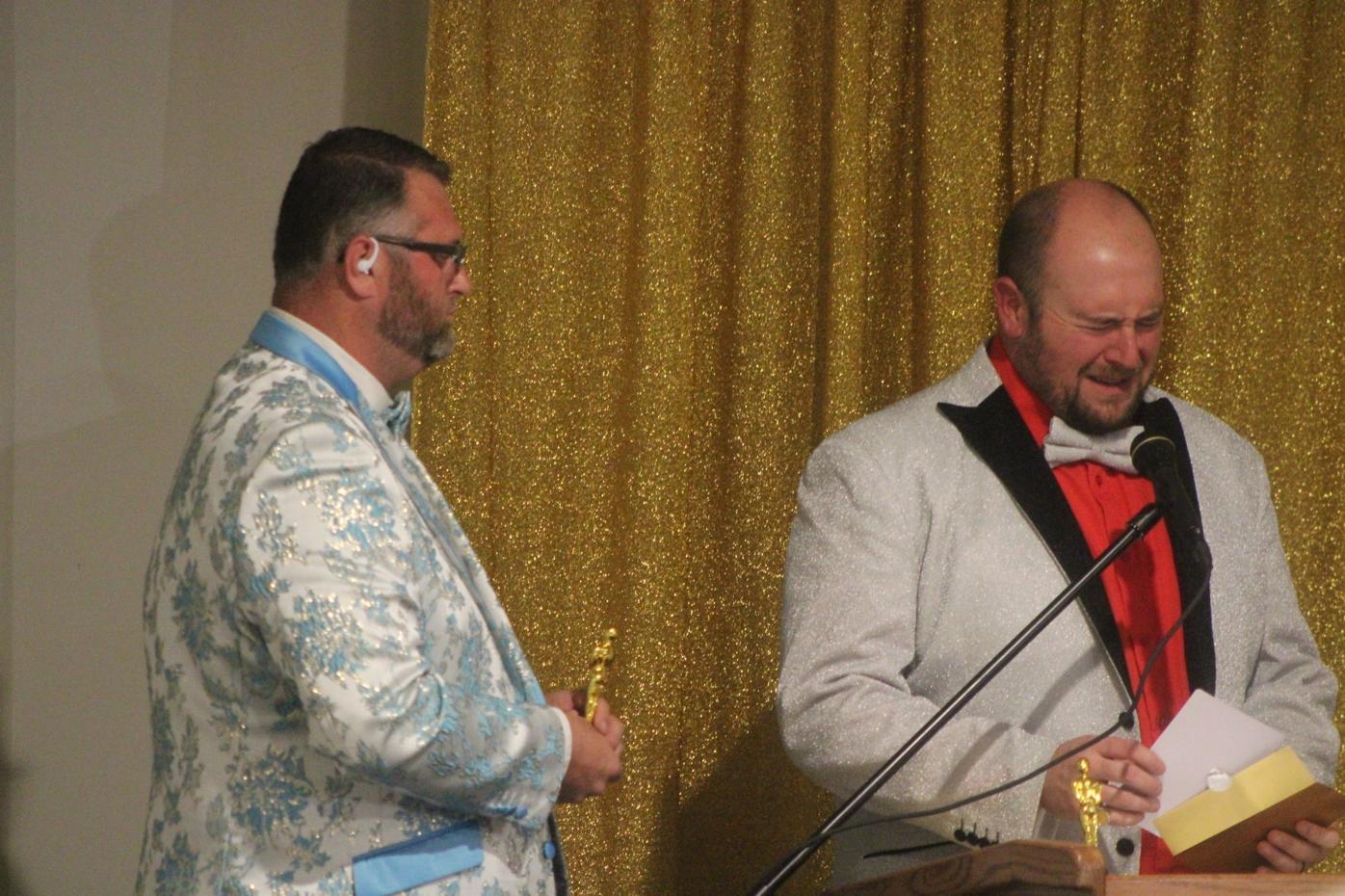 Seymour Philms (Phillip Nanney) looks on as Ben Pozin (Drew Horn) becomes too emotional to announce the winner of a DAFTA award. 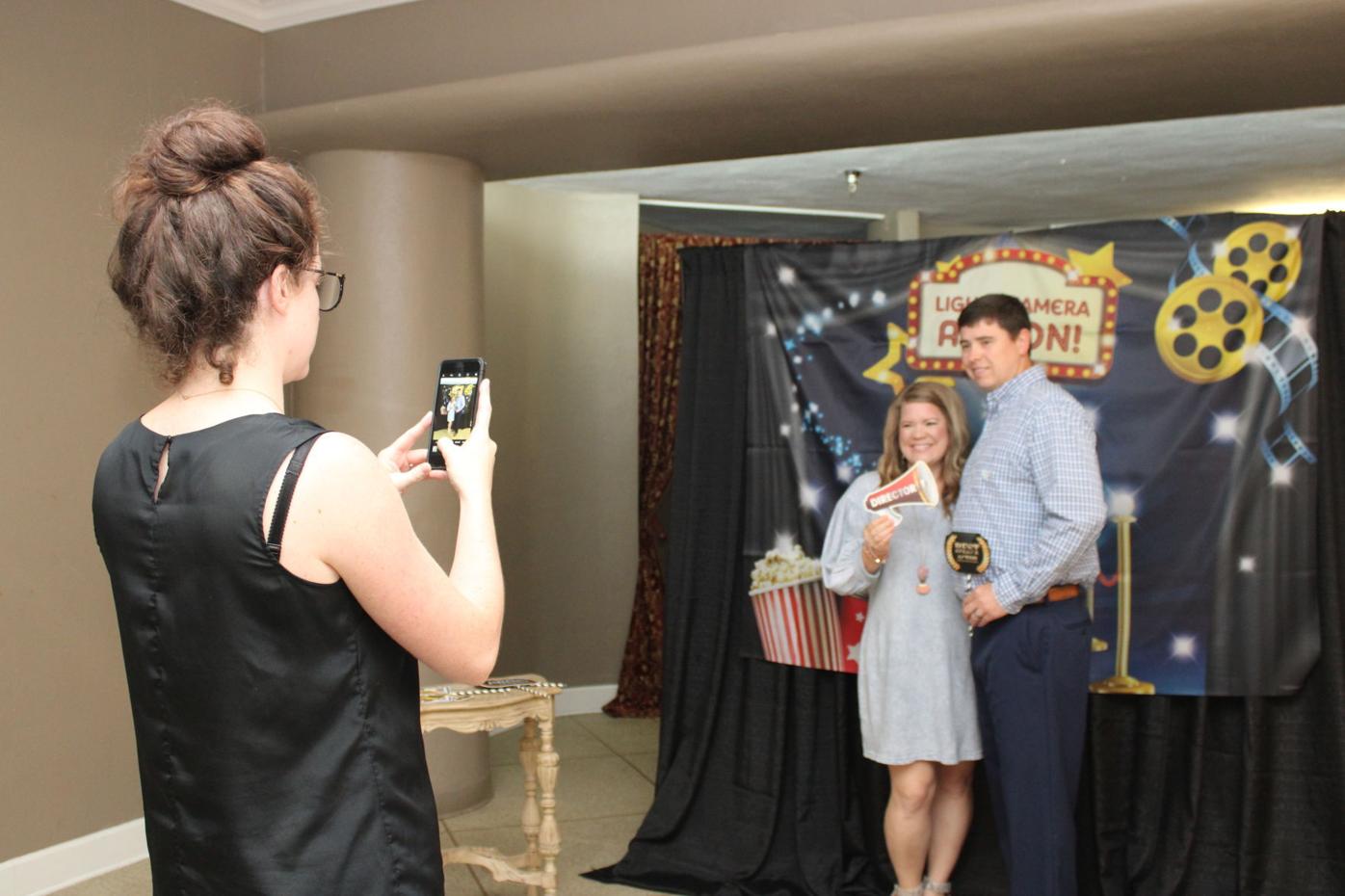 Emily Draffen, director of the Magnolia Civic Center, takes a photo of Dorothy and Lee Gates at the photo booth. 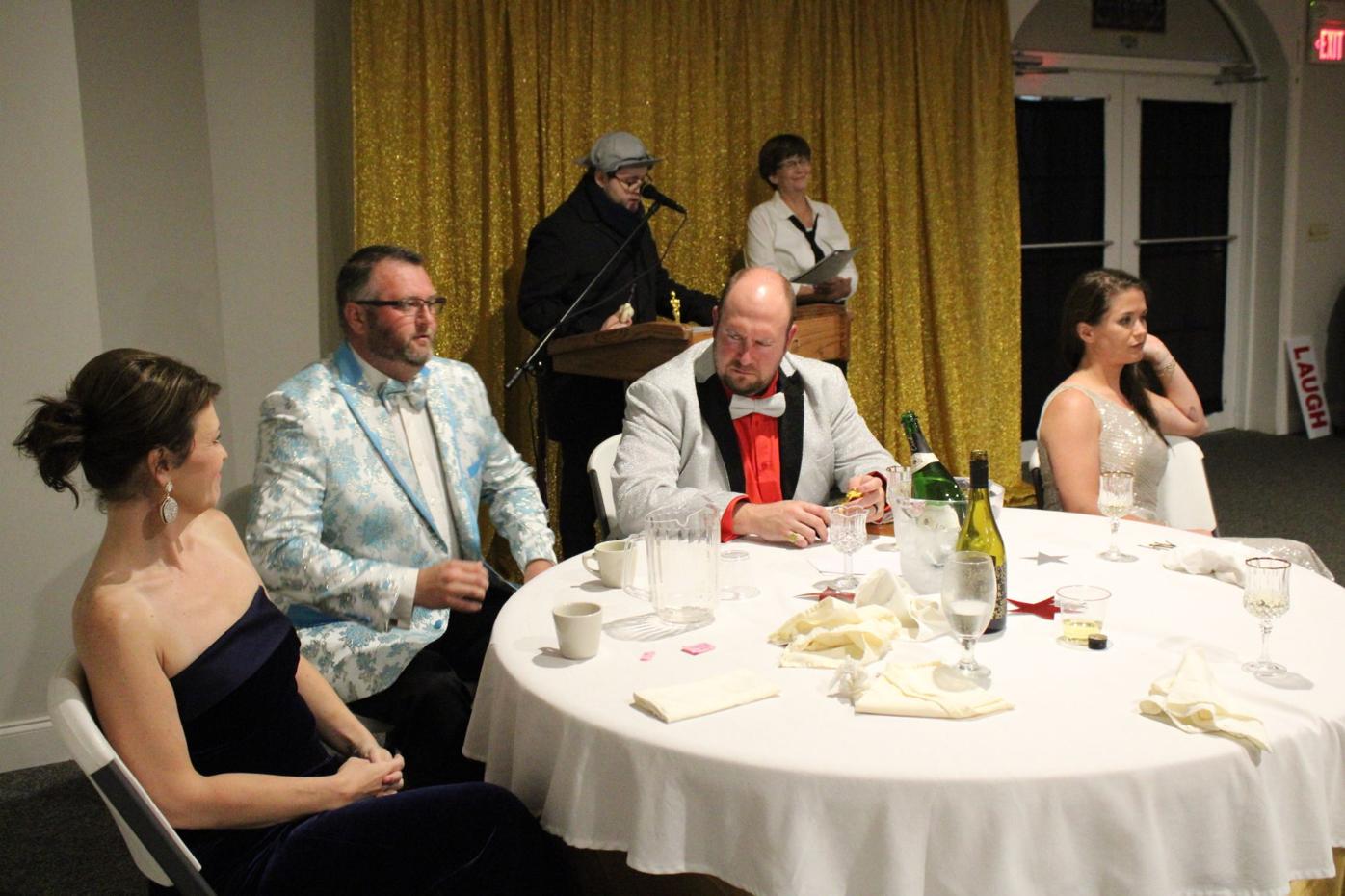 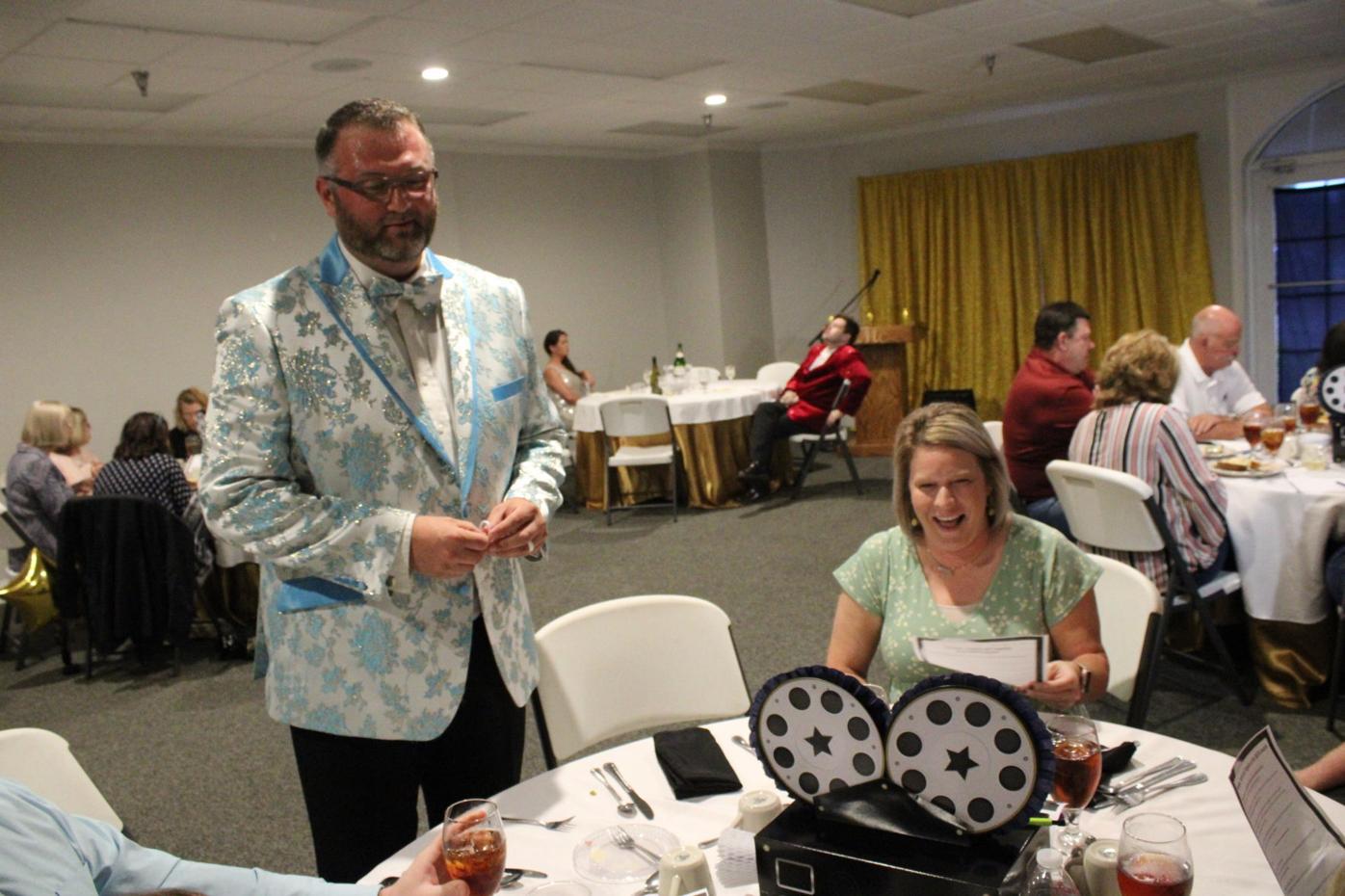 Mindy Crawley, right, laughs as noted producer and director Seymour Philms (Phillip Nanney, standing at left) shares information that might help or mislead the guests at Crawley’s table determine who was responsible for the death of actress Iona Fortune.

An emotional Crystelle Chandeliah (Carley Mahon) cries over the body of stuntman Ivor Sixpack (Matthew Darling) after he collapses at the head table Saturday night during the DAFTA Awards in New Albany. Looking on in shock are actress Nicole De’Limelite (Mary Beth Muncie) and master of ceremonies Ben Pozin (Drew Horn).

Seymour Philms (Phillip Nanney) looks on as Ben Pozin (Drew Horn) becomes too emotional to announce the winner of a DAFTA award.

Emily Draffen, director of the Magnolia Civic Center, takes a photo of Dorothy and Lee Gates at the photo booth.

Mindy Crawley, right, laughs as noted producer and director Seymour Philms (Phillip Nanney, standing at left) shares information that might help or mislead the guests at Crawley’s table determine who was responsible for the death of actress Iona Fortune.

NEW ALBANY • Tragedy took place this past weekend at the Magnolia Civic Center, site of the annual Drama, Arts, Film and Television Academy Awards. One of the best actress nominees, Iona Fortune, was found stabbed to death in the lobby.

The DAFTA program tried to continue, but suspicion grew as five central figures of the award show began revealing motives on who wanted Fortune dead. The finger pointing and gossip became more intense when it became obvious that it was one of five who did it.

Was it Ben Pozin, the dashing actor who served as master of ceremonies, or Seymour Philms, the arrogant but successful producer/director?

Could it have been one of the other glamourous and alluring best actress nominees, Crystelle Chandeliah or Nicole De’Limelite? Or was it the sturdy stunt man, Ivor Sixpack?

Before the show was over, another award nominee was poisoned and dead. Then a detective showed up to help solve the mystery. As the evening went on, audience members enjoyed a multi-course meal while working with others at their tables to determine who committed the dastardly deeds.

The comedy murder mystery “Triumphs, Trophies and Tragedies at the DAFTA Awards” was presented Friday and Saturday nights by New Albany Community Theatre. The dinner theater drew about 40 people each night, giving each person an opportunity to piece together clues to identify the murderer.

“I’ve been involved in New Albany theater to close to 20 years, and I’ve always wanted to do a dinner theater,” said Cathy Garrett, who directed the production. “I like the intimacy of it. I like the closeness of it. I love the dinner theater. I love the murder mystery. We got a group together and said we’re going to do this.”

The DAFTA murder mystery, created by Red Herring Games, starred Drew Horn as Ben Pozin, Phillip Nanney as Seymour Philms, Carley Mahon as Crystelle Chandeliah, Mary Beth Muncie as Nicole DeLimelite, and Nathan Darling in duel roles as Ivor Sixpack and investigator Bobby Wood. Evelyn Mason played a supporting role by holding the applause and laugh signs during the awards TV production while Garrett helped served the meals until it was revealed near the end that she was an undercover cop.

“It was fun adapting and creating a character in such a short period of time, being able to convey a story that ultimately outlines the murder mystery,” he said.

In the dinner theater, the cast would act out a scene and then take a brief break as a course is served. The actors, in character, return to the room to visit the patrons at each table, making themselves available for numerous questions about past relationships, personality conflicts and other gossip that might give clues on who did it.

Staying in character and consistent with the storyline makes for a more intriguing mystery to solve, Nanney said.

“This kind of dinner theater requires so much quick thinking on your feet and improv,” he said. “We have to be able to play off one another and also trust one another to stick to the script. We all have our character backgrounds. We have to stick to the script and make sure everything is playing out the way it’s supposed to. The last thing you want is to give inappropriate or wrong information, and that would derail everything.”

The audience’s participation also included them as members of the awards ceremony. A few of the audience members were surprised when their names were called as nominees and winners in a couple of categories. Saturday night’s DAFTA winners included Stephanie Cox for best death scene in a melodrama and Mindy Crawley for best stunt work.

Through the scenes and table interviews, the audience realized some of the characters didn’t like each other – especially best actress nominees Chandeliah and De’Limelite

Mary Beth Muncie, the theater teacher at New Albany High School, enjoyed stepping out from her teaching role to her role as De’Limelight.

“I’ve directed many shows, and it’s just fun to be back on stage and getting to do the other side of the show,” she said. “I’ve been directing for so long, it was time to do something for myself. I was ready to take the stage again and see if I still had it.”

Wendy Carwyle, a Thaxton resident who attended the theater with husband Baron and son Weston, was impressed by the actors’ performances.

“We thought it was amazing,” she said. “The actors and actresses were on point with their parts. It was just a lot of fun.”

In addition to the actors playing out the mystery, Garrett said there’s a cast of volunteers who made the event possible by preparing and serving food. She also noted that dinner theater is a good way to introduce theater to more people.

“I have been in several dinner theaters myself, but I really like being on the side of service,” she said. “Dinner theater has brought in a group of people that has not come to the theater before. We’ve done productions in the past, and it’s always just a small group of folks that want to see that. But with this like tonight, like I told Evelyn, I’ve probably knew only two or three people tonight, which is wonderful. It brings in people who haven’t been a part of it.”

Other theater activities coming soon to New Albany include Shakespeare in the Park June 25 and a creative playmaking summer camp July 19-23 for children ages 12 and older.

As the investigation at the dinner theater continued, another character – Ivor Sixpack – suddenly died. Wood, the detective, then arrived to interrogate the patrons at each table to find out who they thought the killer could be. They filled out a form listing a team name, the names of the murder or murderers, and what the motive was.

At the end, it was revealed that Philms, the producer/director, was the one who stabbed Fortune and poisoned Sixpack.

“For me, it was a challenge as an actor of being able to prove my innocence in the midst of knowing that I was guilty,” Nanney said. “That was a fun challenge.”

Carwyle and others at her table thought Pozin and De’Limelight were equally guilty. Though they didn’t get this one right, Carwyle said they are looking forward to future dinner theaters in New Albany.

“I was not surprised Seymour was the killer, but the skit was written so well that it was hard to pick just one,” she said. “We definitely cannot wait for the next one.”