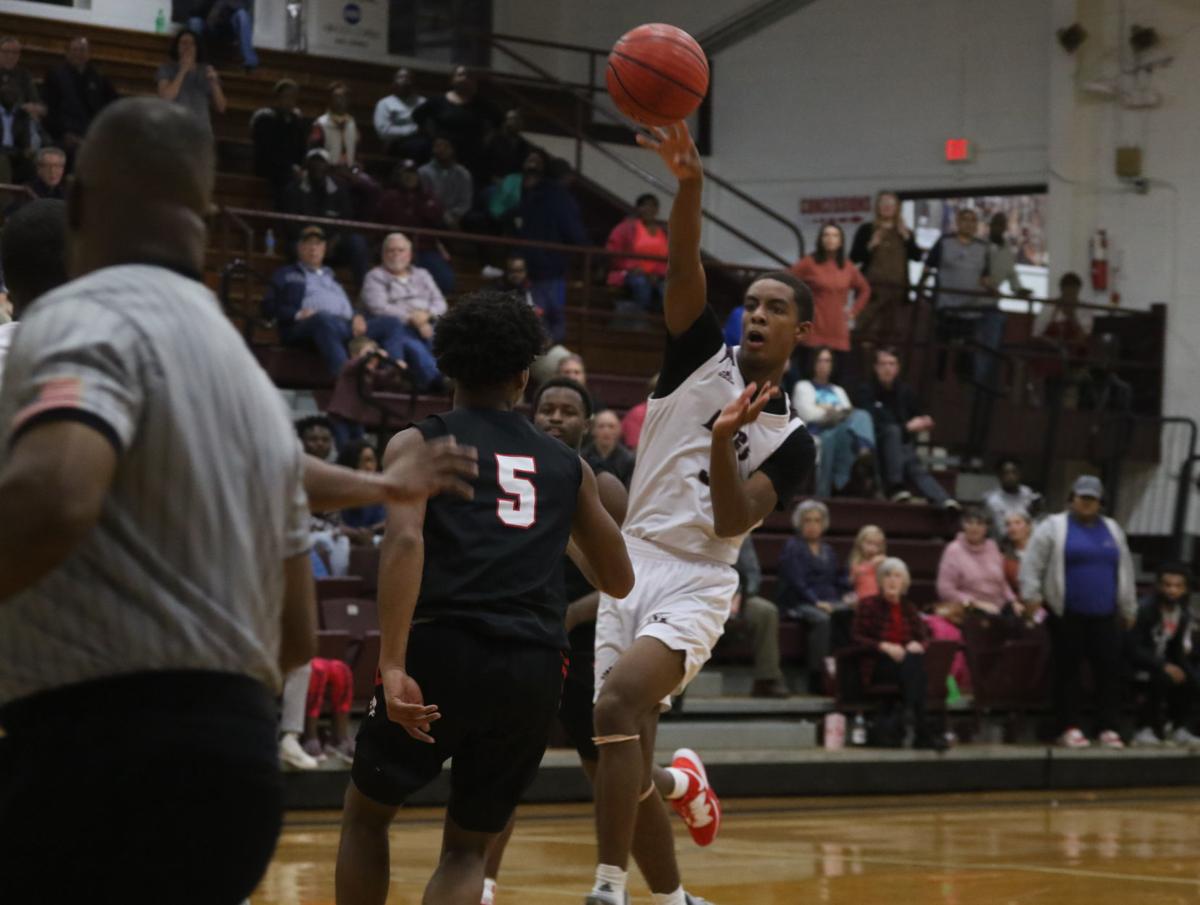 Albert McDonald came off the New Albany bench to give Coach Scotty Shettles some quality minutes and finished with nine points. 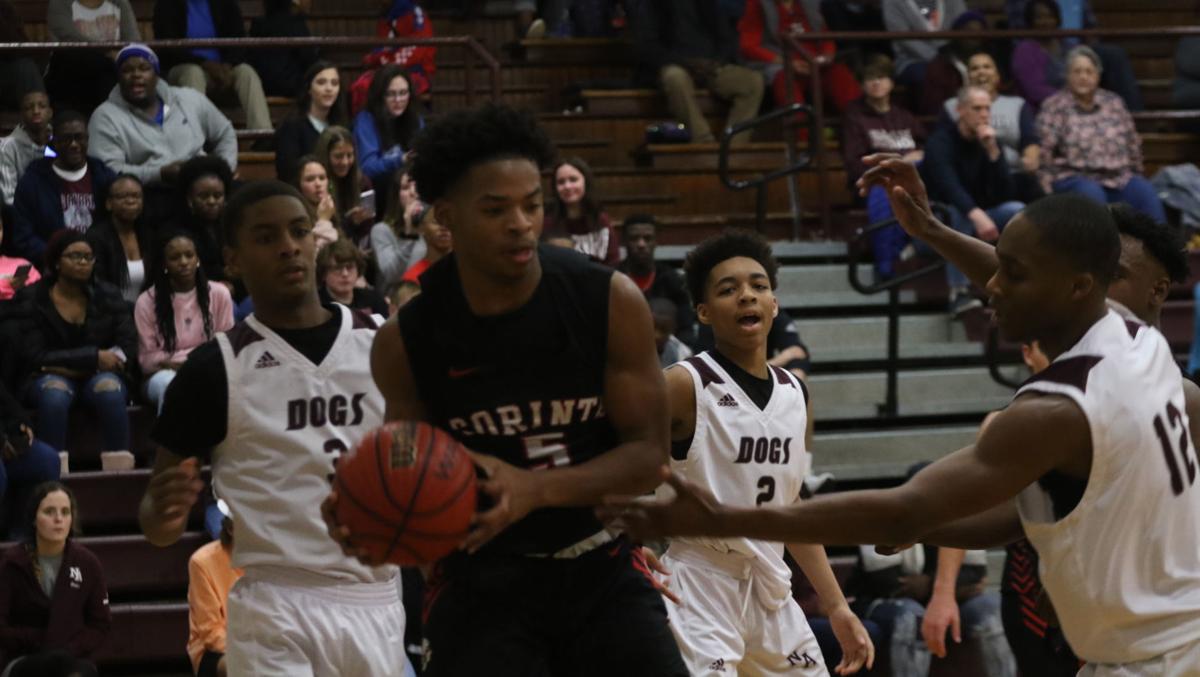 Michael Casey (12) and teammates Albert McDonald (3) and Kam Carter (2) apply the pressure defensively for the Bulldogs in the paint. 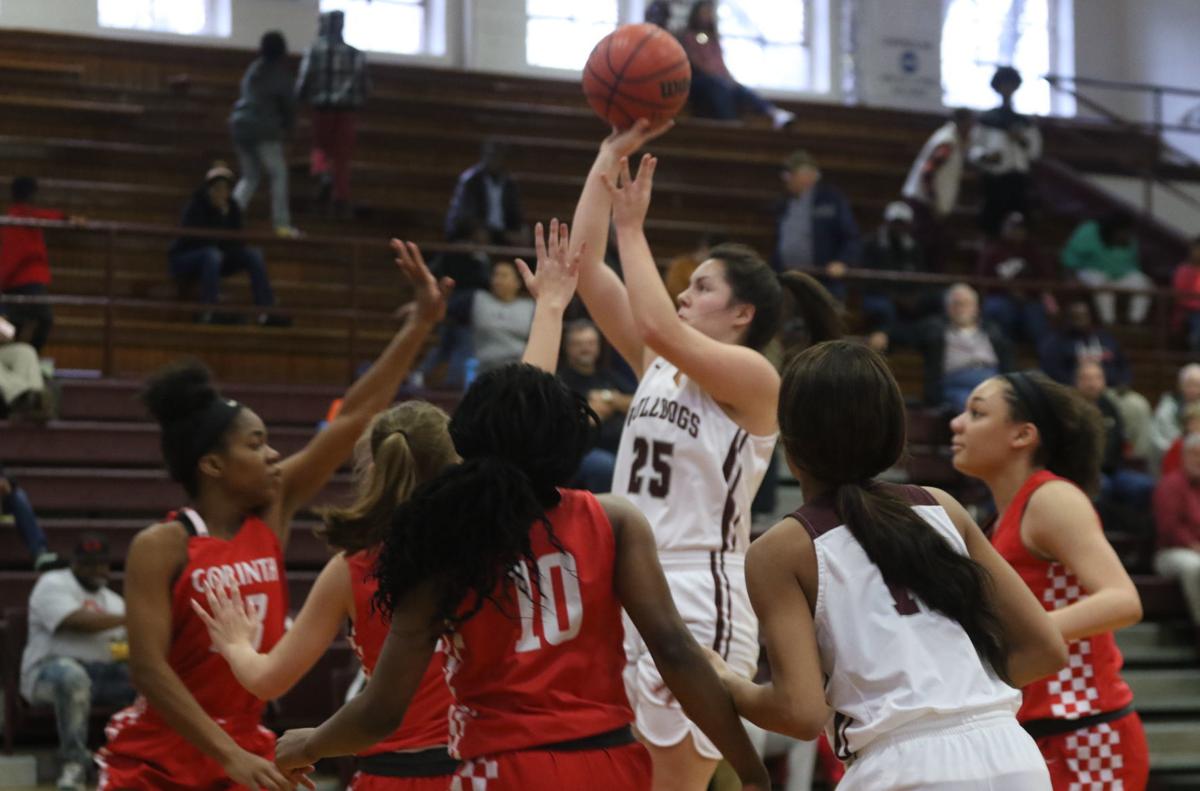 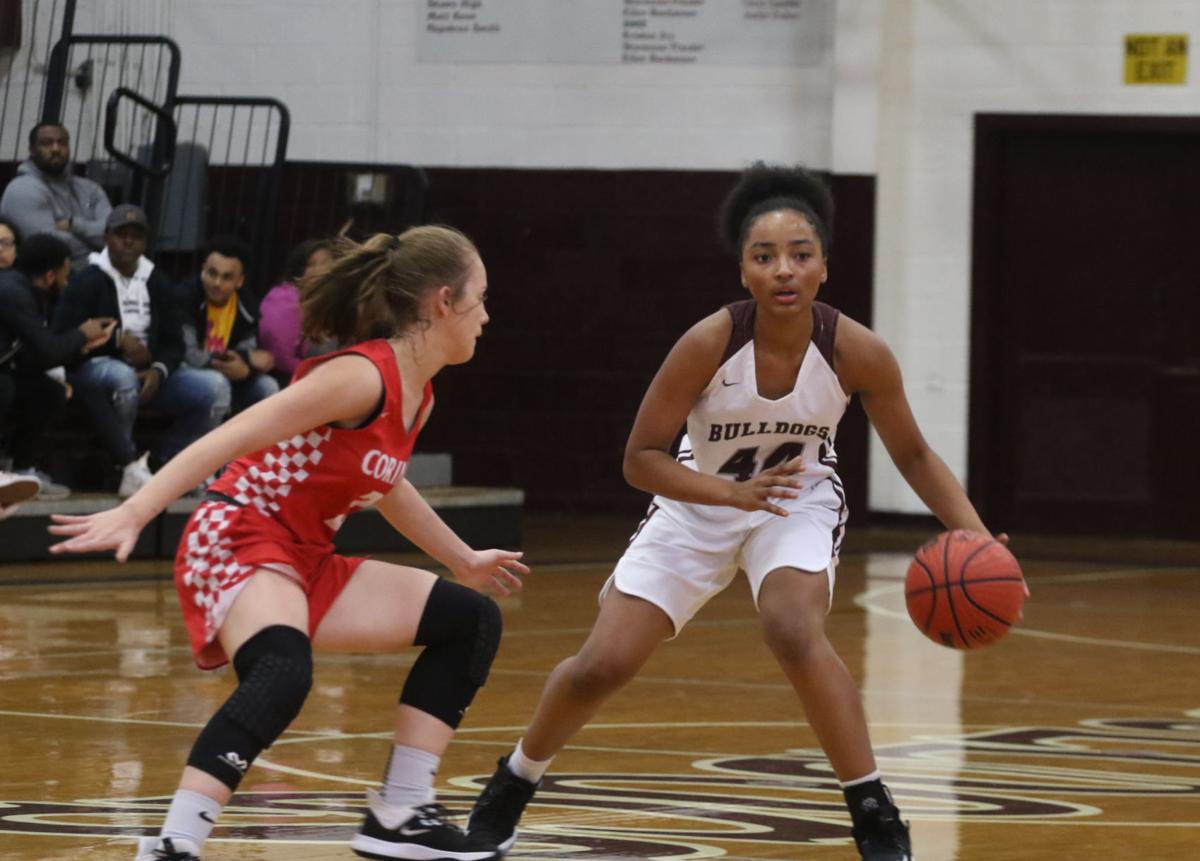 Ashanti High looks for an open teammate during the first half. High scored 11 points in the win.

Isaiah Ball scored 11 points in the fourth quarter to lead New Albany to the win over Corinth on Friday.

Mitchell Shettles drives in to score two of his game-high 24 points for the Bulldogs.

Albert McDonald came off the New Albany bench to give Coach Scotty Shettles some quality minutes and finished with nine points.

Michael Casey (12) and teammates Albert McDonald (3) and Kam Carter (2) apply the pressure defensively for the Bulldogs in the paint.

Ashanti High looks for an open teammate during the first half. High scored 11 points in the win.

NEW ALBANY - Corinth landed a punch early in Friday's game, but New Albany overcame a slow start and won by a 73-67 final in 1-4A boys basketball. The Bulldogs sewed up the decision at the free throw line in the final period as they were 14 of 14 at the charity stripe.

Isaiah Ball hit all eight of his free throw attempts as well as a 3-pointer to hold off the Corinth charge in the closing minutes. Albert McDonald and Mitchell Shettles both had four points in the final period.

"We shot 86 percent, we were 24 of 28 from the free throw line and we made our free throws when they counted," New Albany coach Scotty Shettles said. "I'll say this, Isaiah Ball has been out for the last two games with a twisted ankle. He comes back, I didn't think he was 100 percent, but what does he do, he goes out there and goes 12 for 14 from the free throw line.

"All of our guys stepped up and hit free throws. To me, the game was so tight and so close that every possession was key, but I thought our willingness not to lose more than anything helped us win this ballgame. We weren't going to take losing as an answer."

Corinth stunned the Bulldogs right after the opening tip as they jumped out to an 8-0 lead off an early jumper and back-to-back threes.

"They (Corinth) went up 8-0 and I called a timeout, I said look guys, we gotta turn the defense up to get back into the game now that we've dug a hole," Shettles said.

The Bulldogs righted the ship to score their first points of the night and after a Corinth goal notched the score at 10-2, New Albany reeled off a 9-0 run to take the lead at 11-10 with 4:09 left in the quarter.

Corinth finished off the rest of the period with a 15-10 run and led 25-21 after the opening eight minutes.

The Bulldog defense locked in during the second quarter while only surrendering eight points to the visiting Warriors. New Albany scored 12 points and Tre Berry knotted the score at 33-all with his buzzer-beating layup.

The teams matched buckets in the third period with the largest lead of the period being only four points and they entered the fourth quarter tied at 48.

Ball sank two free throws to give New Albany the lead at 50-48 to start the scoring in the fourth and the Bulldogs never trailed despite the fact that the Warriors came back to tie the contest four times during the final period.

"We got some turnovers, I think they turned the ball over 17 times and we turned it over 12 and that's five more possessions we get," Shettles said. "In a game like that, every possession is key."

Mitchell Shettles was high man for the game with 24 points. He also had four rebounds and three steals. Ball scored 20 points and Michael Casey added 11 points to go with five rebound and three assists. Albert McDonald came off the bench to score nine points while pulling down three rebounds and getting four steals.

"Albert McDonald was fantastic, finished with nine points, but he got some steals and he got some rebounds," Shettles said.

Kelsey Ledbetter scored 12 of New Albany's 21 points in the first quarter to help lead the Lady Bulldogs to the 61-42 win in the opener.

Ledbetter hit one 3-pointer plus four field goals and added in a free throw for her scoring. Analisa Cheairs and Ashanti High picked up the scoring mantle for the remaining three quarters as they combined for 25 points.

New Albany led 21-9 after a period, then stretched the advantage to 35-19 at the half. The Lady Bulldogs held a 12-8 scoring upper-hand in the third period as they led 47-27 after three.

Ledbetter led all scorers with 15 points. Cheairs hit for 14 and High added 11 for New Albany.