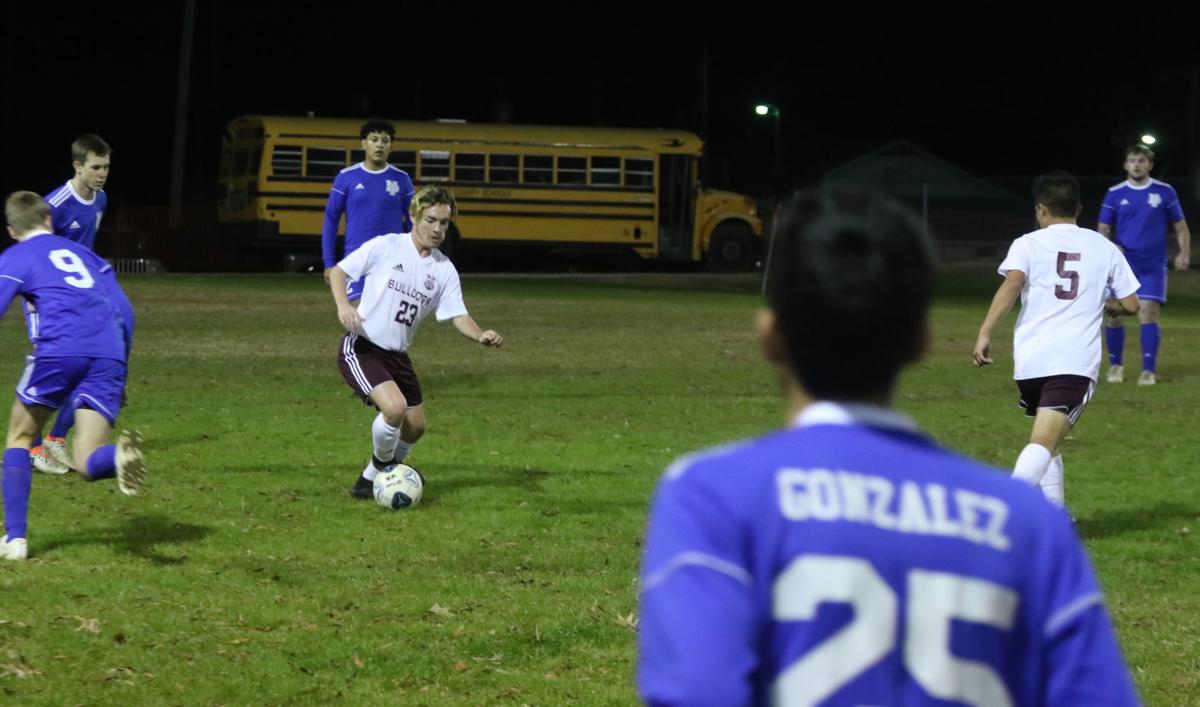 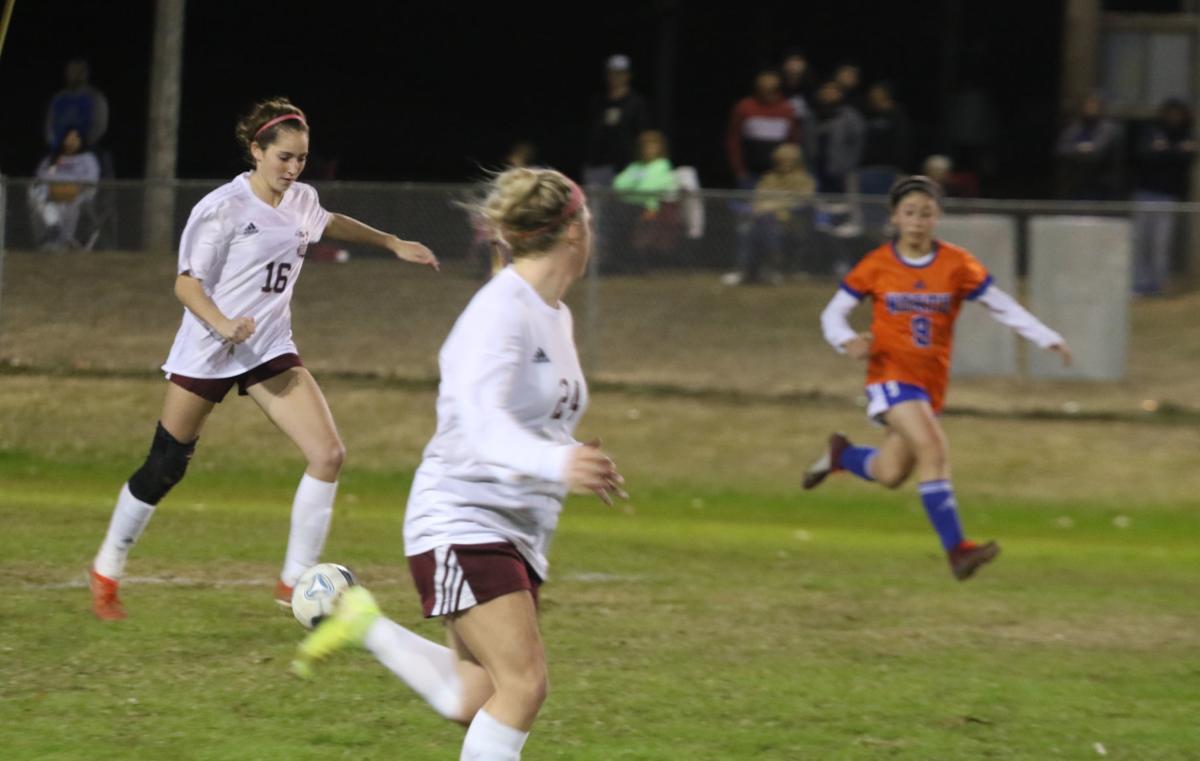 Caroline King pushes the ball through the midfield as Annalyn Hogue stays in front of the play. King had a hat trick (3 goals) and Hogue also picked up a goal. 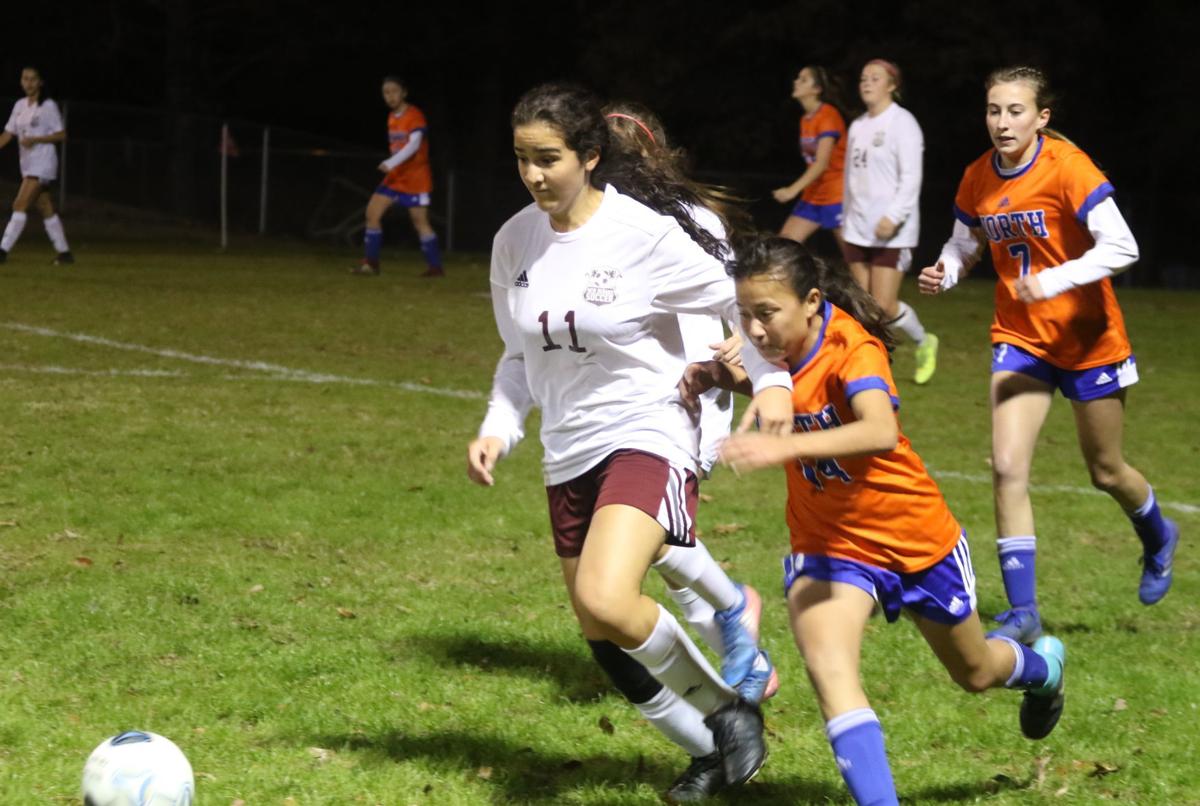 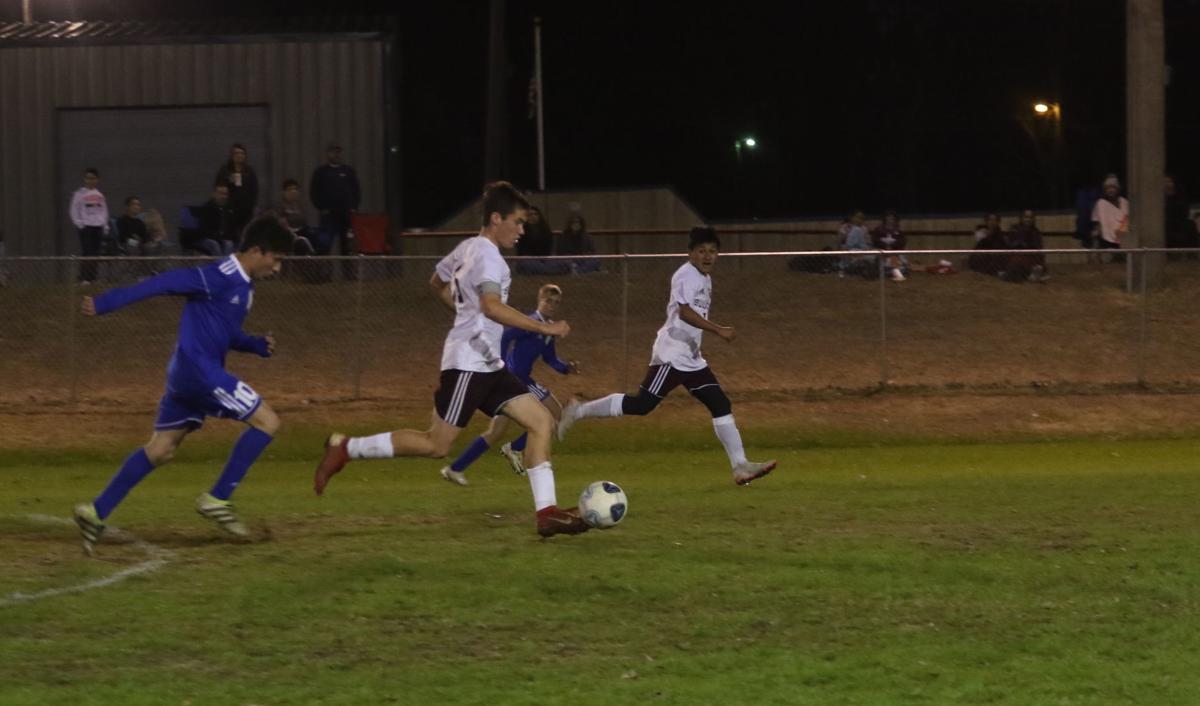 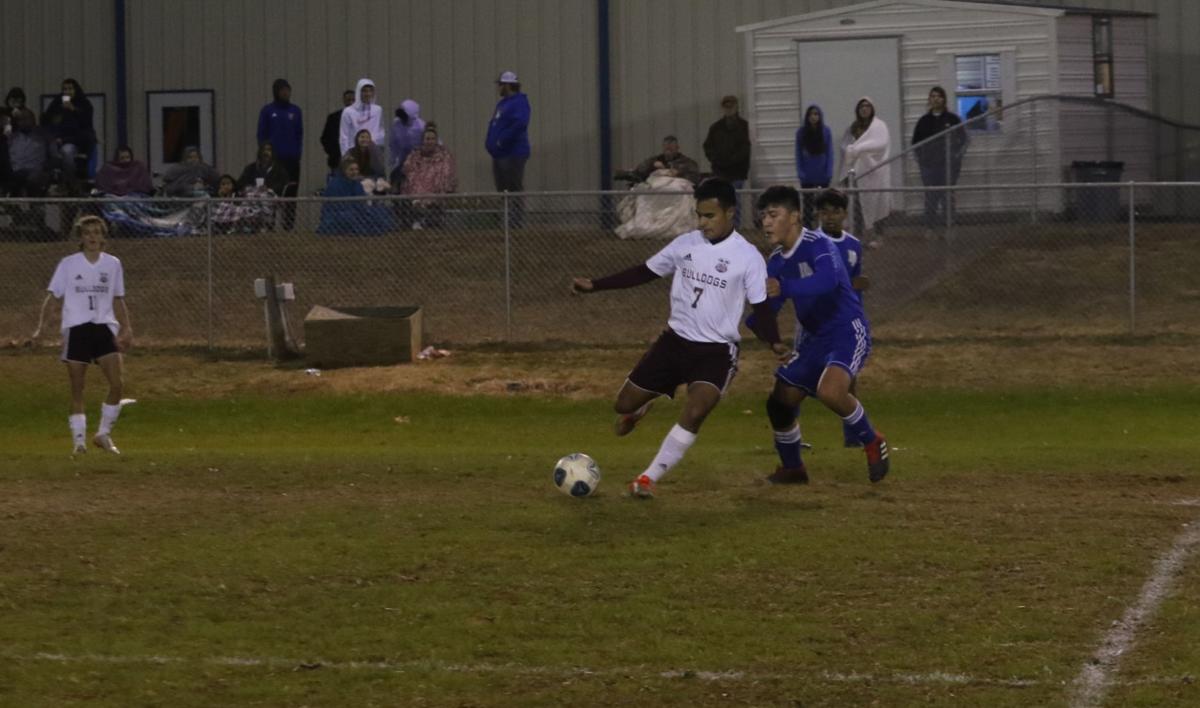 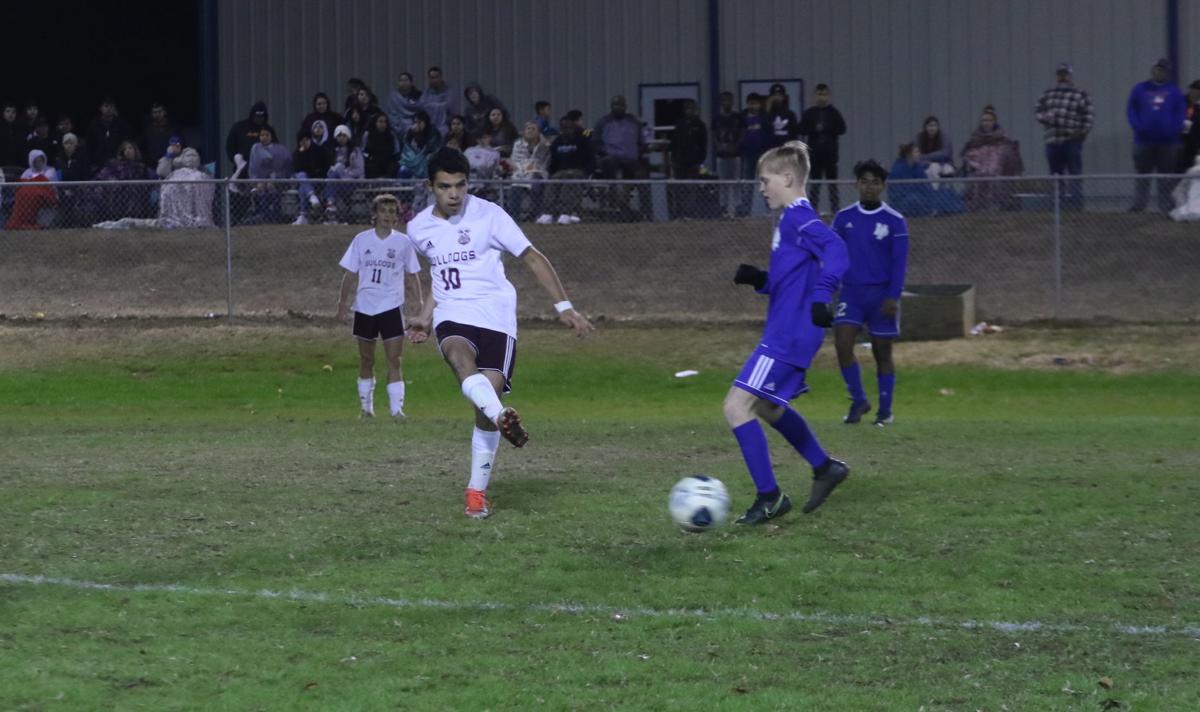 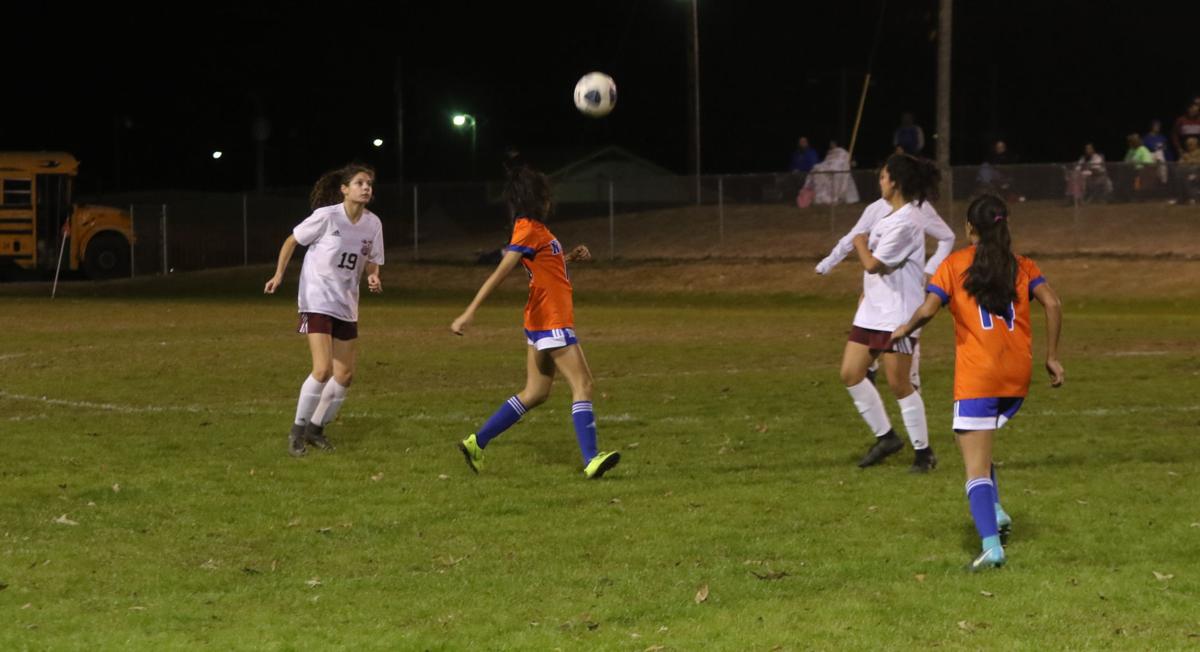 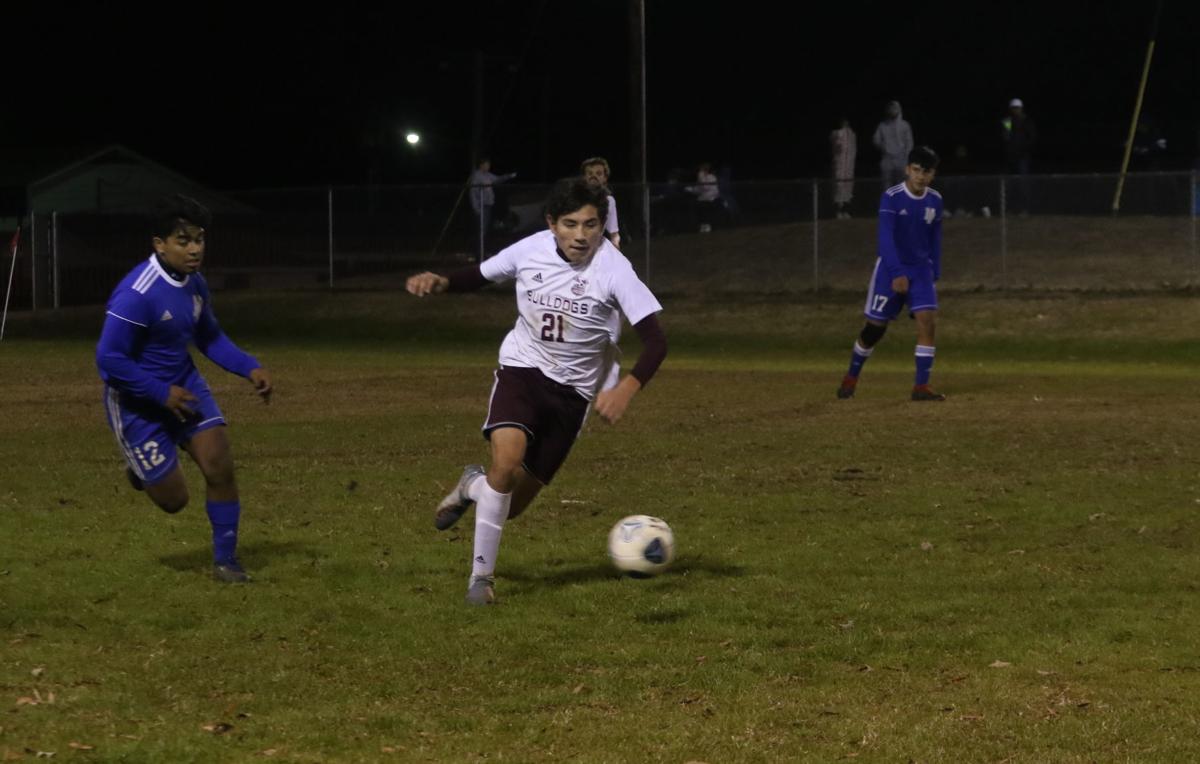 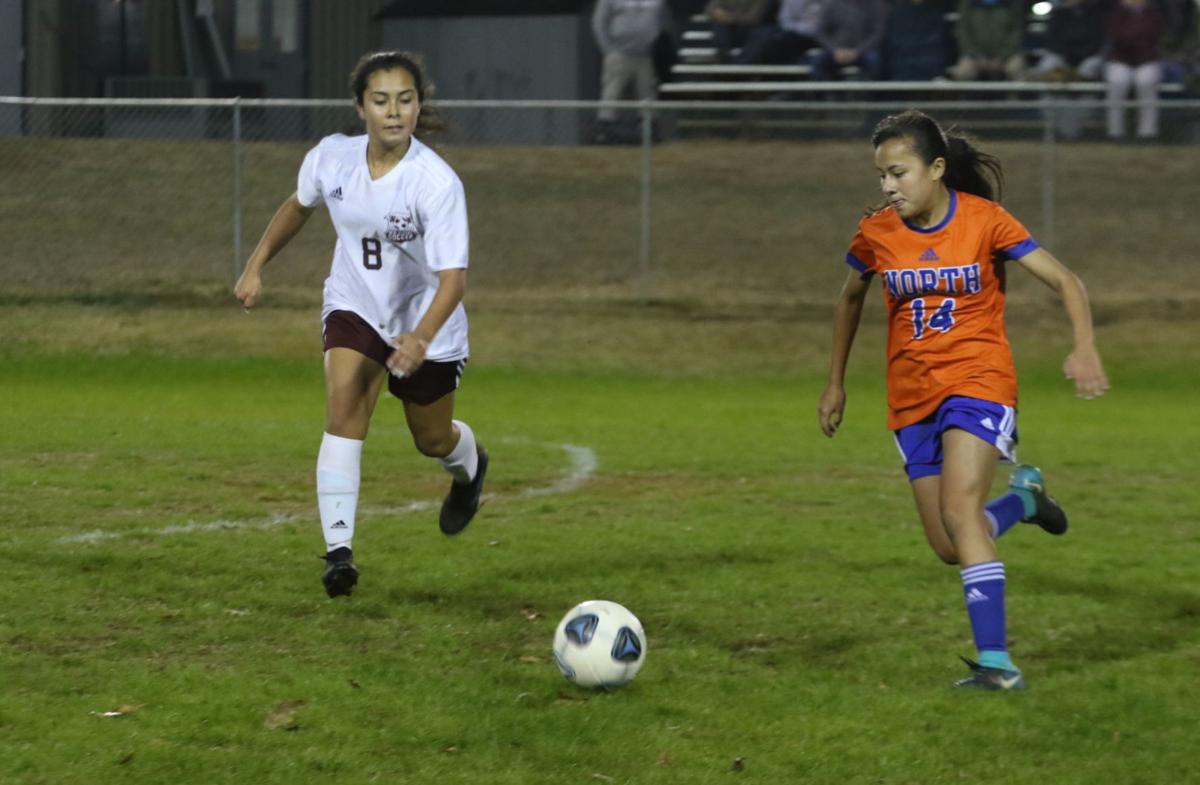 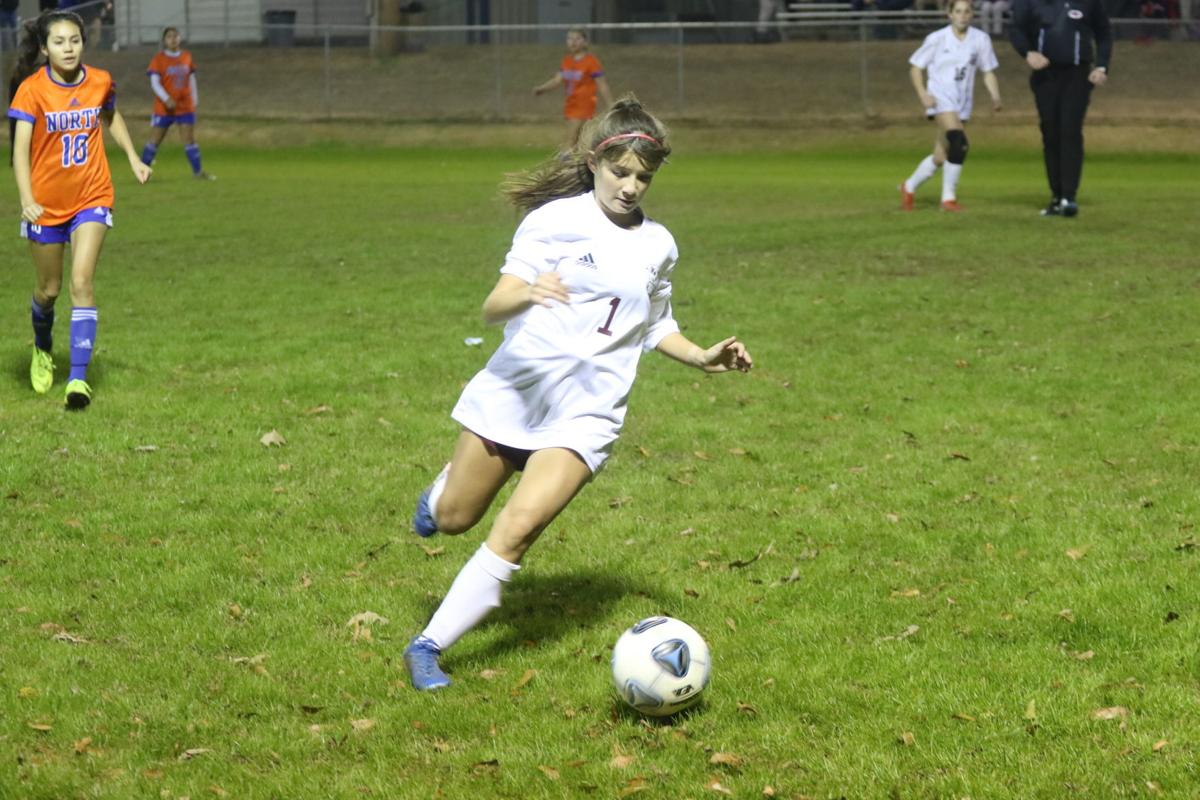 Parker Clayton battles for the 50/50 ball near the midfield. Clayton scored a goal and had an assist in the Bulldogs 5-0 win.

Uriel Aquirre of New Albany had two goals in the win at North Pontotoc.

By Dennis Clayton Sports Editor
1 of 10

Caroline King pushes the ball through the midfield as Annalyn Hogue stays in front of the play. King had a hat trick (3 goals) and Hogue also picked up a goal.

ECRU - New Albany made the short trip to Ecru to face North Pontotoc in Division 1-4A soccer on Thursday and both teams came away with convincing wins to go 1-0 in division play.

New Albany boys won the nightcap by a 5-0 final while the Lady Bulldogs won the first game of the night by a 7-1 decision.

The key to the win for the Bulldogs in the boys contest was their ability to convert their chances into three goals in the opening nine minutes of the second half to go up 4-0 over the Vikings after the teams went to half with New Albany holding a narrow 1-0 lead.

"The first half was frustrating for us in the attack, we didn't capitalize on our chances and the ones we had were limited," New Albany coach Caryl Vogel said. "They (North Pontotoc) lined up in a more defensive formation that we were not expecting.

"It was the first time for our boys to see a system like that this year and we made some adjustments at halftime to give us a better chance to get in behind it."

Max Spencer's goal inside the 18 gave the Bulldogs the 1-0 lead which the Bulldogs carried to the half. Cristian Perez had the assist on the play.

"I thought Max Spencer had a huge night for us, his work rate up top is crazy and he continuously puts the opposing defenders under pressure," Vogel said.

Spencer kick-started the second half with his second goal at the 42 minute mark as he again got loose inside the box for the look and goal.

Uriel Aquirre followed Spencer with goals in the 46th and 49th minutes to stake the Bulldogs to the 4-0 advantage. Aquirre's first goal came off a deflection following a shot by Spencer and his second goal was courtesy of an assist by Parker Clayton.

"The goals were massive to help the boys settle in and open the game up a bit," Vogel said. "Uriel Aquirre scored his first two goals of the season which will hopefully bring another element to his game."

Clayton closed out the scoring for the Bulldogs with his goal in the 61st minute and John Davis provided the assist that gave New Albany the 5-0 final verdict.

"I thought John Davis had a big night in the midfield for us making runs in behind and putting their backline under pressure," Vogel said.

While the offense was on the attack and lighting up the scoreboard, the Bulldog defense was solid and did not allow a point in the division match.

"I though our midfield and backline did a great job of handling North Pontotoc's attackers, they have some players with great ability to go 1v1 and create chances," said Vogel. "They communicated well and picked up their marks well.

"It's good to get the stress of the first division game out of the way and have that bit of experience moving forward."

New Albany was able to run up a 4-1 advantage by the half and the Lady Bulldogs cruised past North Pontotoc by a 7-1 final.

"It's always good to go 1-0 in division to start with," New Albany girls coach Bert Anderson said. "At the beginning of the game they (North Pontotoc) were winning every ball and luckily we got three or four good balls up to Caroline (King) who was playing up top tonight and once she got that first goal, everybody kinda eased up. We were then able to play like we needed to."

King finished her night's work with a hat trick (3 goals) while Sami Jo Doyle, Maggie Jo Everett, Katherine Gonzalez and Annalyn Hogue had a goal each. Doyle added two assists while Gonzalez and King had one apiece.

"I think we took them for granted to begin with, but once we got that first goal everybody settled down and started playing like we are able to play," Anderson said. "It was good to get the goals and get the monkey off our backs.

"Game in and game out the backline of Maggie Jo, Ayleen (Gonzalez), Catherine (Truemper) and Cameron (Stout) don't get enough credit for what they do on that backline. They are really coming together and starting to gel as a unit. I really like the way they are coming along. Our seventh grade keeper (Lucy King) is really good at being composed back there and she is doing a phenomenal job."