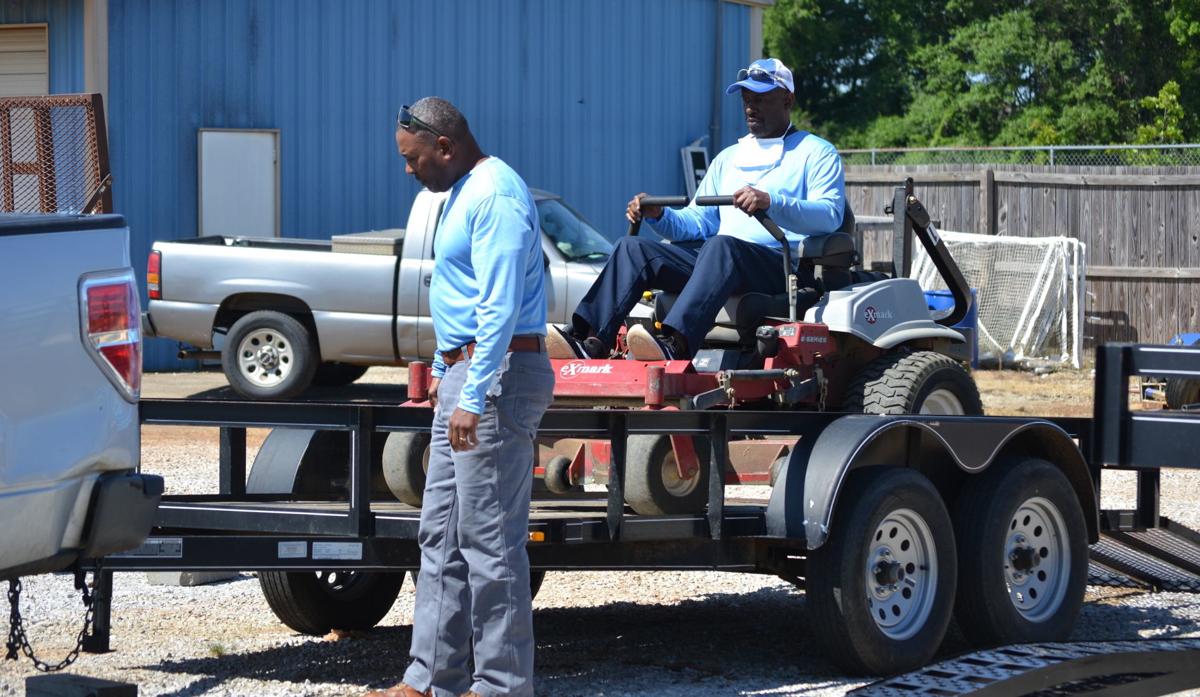 Terry Ball and Alvin Parks load a mower onto the trailer as they prepare to go and work at one of the parks that the NAPC maintains in the city. 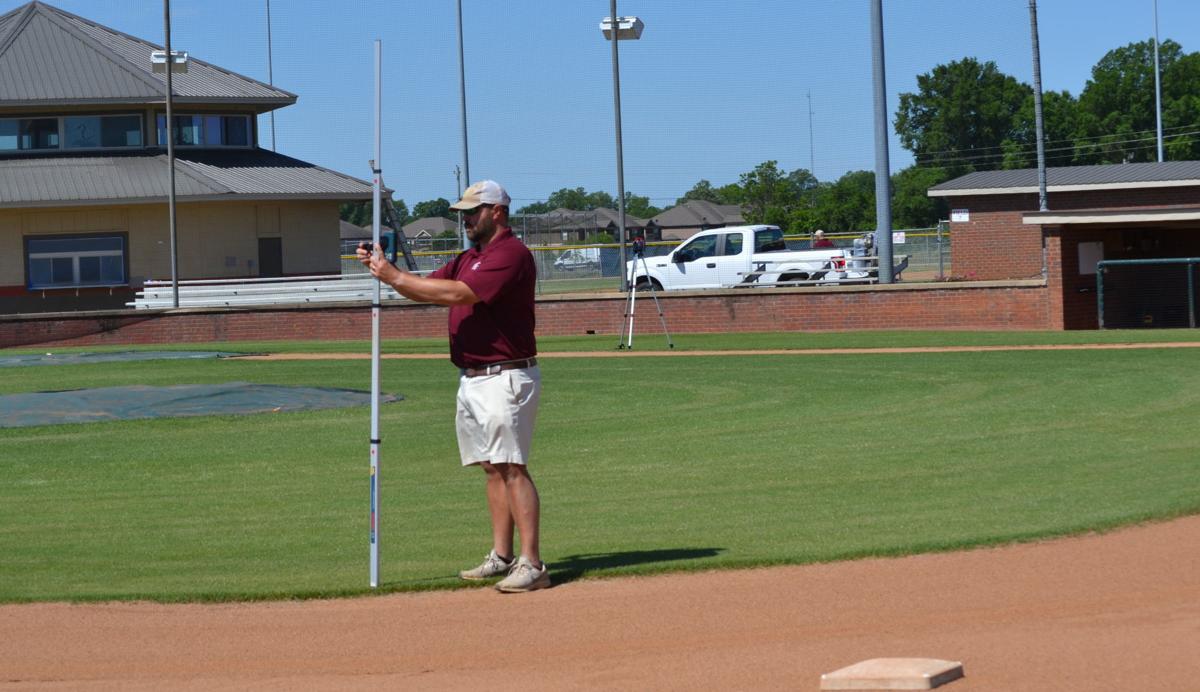 Chase Jeter uses the transit to get the precise measurements on the field as he has been renovating the infields at the Sportsplex with fresh dirt surfaces. 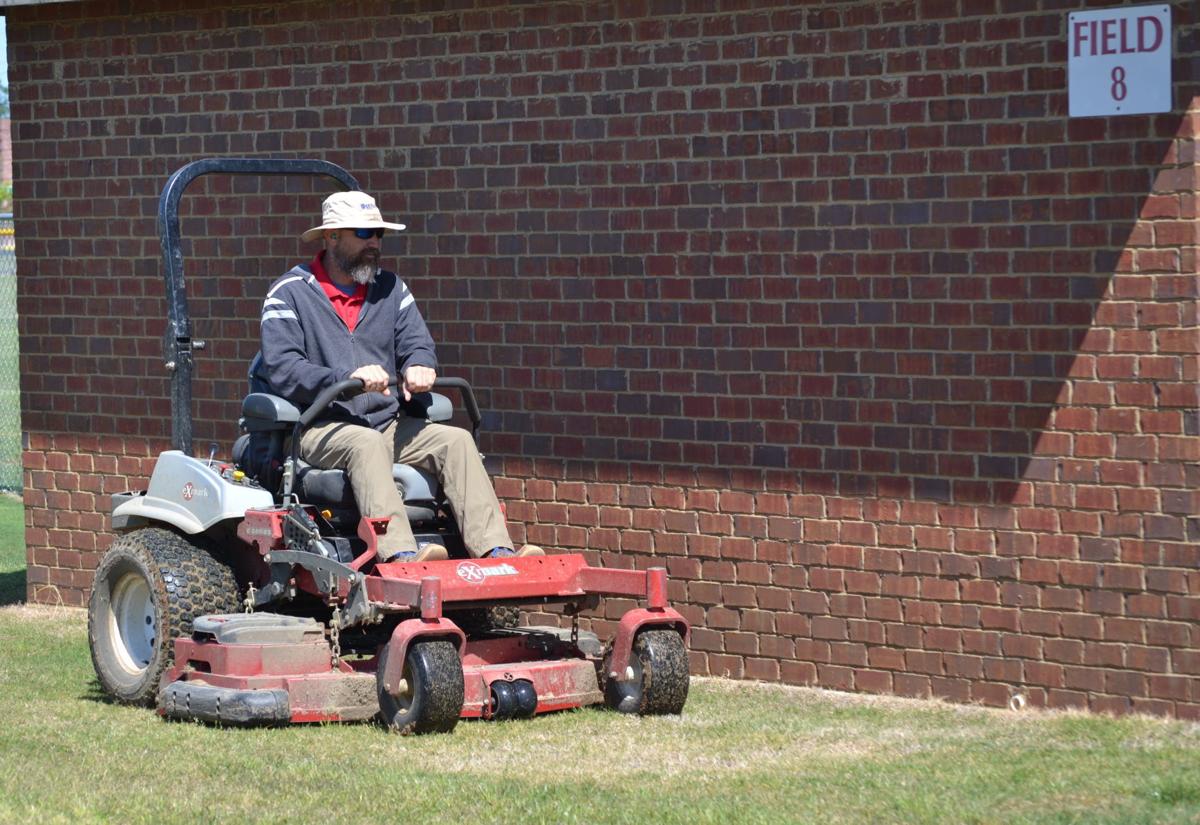 Steve Treadaway mows the lanes outside the fields at BNA Bank Park in efforts to keep the grounds maintained to normal conditions despite no baseball being played at the present. 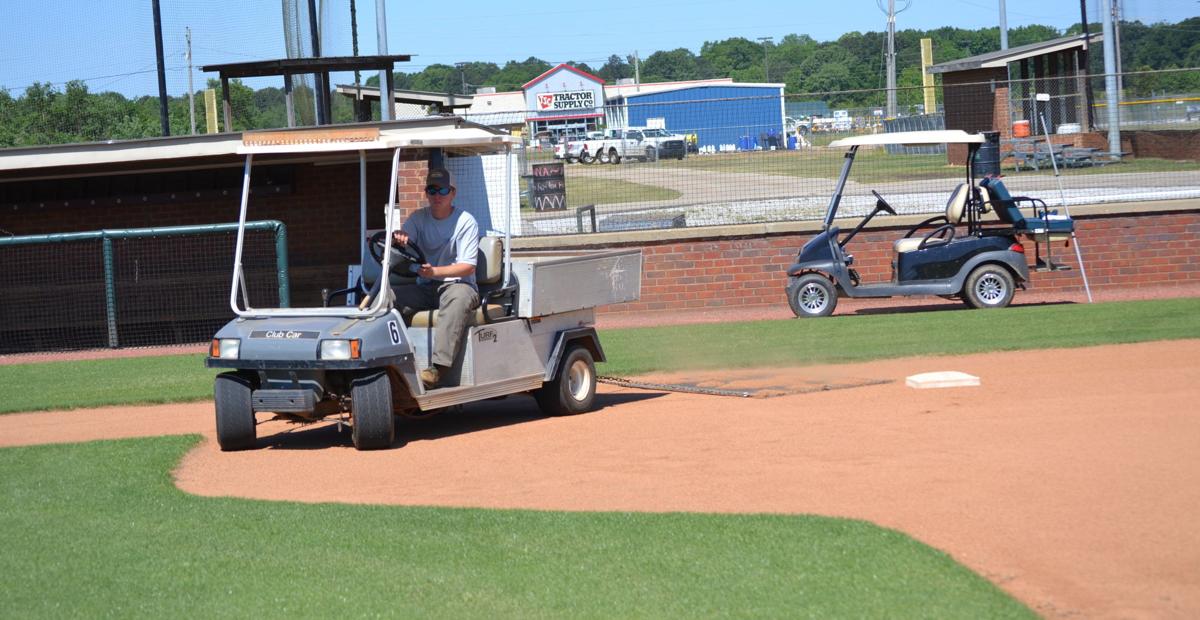 Logan McDonald drives a golf cart while pulling a drag to level the infield at Legion Field in BNA Bank Park.

Alan Newby of the New Albany Parks and Recreation Department mows along the foul lines at Legion Field in BNA Bank Park. Even though no baseball and softball is currently being played at the Sportsplex, the fields still require mowing twice a week.

Terry Ball and Alvin Parks load a mower onto the trailer as they prepare to go and work at one of the parks that the NAPC maintains in the city.

Chase Jeter uses the transit to get the precise measurements on the field as he has been renovating the infields at the Sportsplex with fresh dirt surfaces.

Steve Treadaway mows the lanes outside the fields at BNA Bank Park in efforts to keep the grounds maintained to normal conditions despite no baseball being played at the present.

Logan McDonald drives a golf cart while pulling a drag to level the infield at Legion Field in BNA Bank Park.

NEW ALBANY - There will be no baseball and softball in New Albany for local little league players this season due to the coronavirus pandemic. The New Albany Board of Aldermen decided to cancel the season after much thought and deliberation.

"After a good bit of deliberation and it was a really tough decision on their part because they really wanted to see it be played, but with the time frame we had and having to order shirts, do the drafts and all the rest that goes with it, it just didn't fit with us not knowing what the future holds," Johnny Epting of the New Albany Parks and Recreation Department said. "With this pandemic, they (aldermen) decided to that we had to cancel the season and refund the money. Natalie (Grooms) is in the process now of getting all the names down so we can give the refunds.

"We had to make a decision now and could not keep lingering on with it. City Hall is going to try to get the refunds out within five weeks. They have to go through the process of circulating and getting the checks printed to give the refunds and that takes time."

Epting stated that he knew some people needed the money during these uncertain times and he was hopeful that it could bet returned to them as soon as possible.

"We had close to 500 signed up, like 490 something signed up," Epting said. "That is a good number of players for us too.

"Obviously, this affects the city too by not being able to bring in revenue into the city as far as the restaurants and all the businesses locally. You've got upwards to 500 kids and that brings in parents and grandparents that come to New Albany for the games."

Epting went on to say that the social distancing rules made it impossible to be able to play due to the number of people that attend the games. He said there was no way that could be adhered to with the limited numbers that were in the guidelines.

Another area that will be severely impacted with no summer programs will be summer employment for area school students. Since there is no little league a significant number of area youth will not be needed to umpire, work concession stands or work with the grounds crews in maintaining the ball fields and city parks.

"We have not hired any summer help, the city has been good to keep us all working and paying us and right now we're making it. We are able to mow all the parks with the staff that we have because we are not having the games and that has taken some of the pressure off us. We work on the fields to maintain them, just not as 'game-ready fields'."

The BNA Bank Park staff has been busy working on renovating the infield surface on several of the fields in the Sportsplex and still have a few more to go. There are eight full-time employees at the Park and Recreation Department.

"We went ahead and we are adding dirt then trying to level them back up to get them ready whenever they do start playing again," Epting said. "Hopefully the governor and the city will allow the Cotton States Baseball League to play in June.

Besides all the fields at the Sportsplex at BNA Bank Park, the Park Commission staff also mow and maintain city parks at Alabama Street, Shady Dell and Park Along the River.

"We've got our routine down and we've been able to cover everything even through all the rain. The city has provided us with good equipment, so we've been able to keep everything mowed. We've kept it so people can walk on the trails without having to worry about tall grass or snakes. The walking trails have never stopped, people have been walking on them throughout this whole thing."

The Spraypark at BNA Bank Park will also not be open for children this year due to the pandemic and other issues related to maintenance.

"It would be impossible to do social distancing at the Spraypark and we were going to have to spend several thousands of dollars to get it running," said Epting. "Hopefully by next year we can get those repairs made and be able to open up like normal. The board also made the decision to not open the Spraypark at all this year."

Tennis has been shut down this year too, not only for high school, but for those that were taking lessons.

"Bo Bowman has been affected by the shutdown with all the kids that cannot take lessons and that has affected the economy too because people are not coming in and getting their lessons, spending money and all that," Epting said. We've taken a hit money-wise, but we've got to be safe."

Epting holds out optimism that maybe some of the activities that usually go on at the Sportsplex will happen this summer as only time will tell if it comes to fruition.

"We do have some tournaments scheduled in June and July plus a Grand Slam Tournament, so we are hoping that we will get the go ahead on those to be able to play and getting folks to coming back to the Sportplex, coming back to town, bringing in some revenue and getting the economy rolling. All of the city budgets have been hit by this because the tax dollars are not coming in.

"Hopefully this will get headed in the right direction and we will get started back up having games. We hope to see the people coming back out and the players practicing ball and whatever. We hope our soccer league will not be affected in the fall because we had really good numbers in it last year and I expect more this year because they didn't get to play baseball or softball. We've also got a couple of high school cross country events scheduled in the fall. Hopefully this virus will get out of the way and we can move forward."