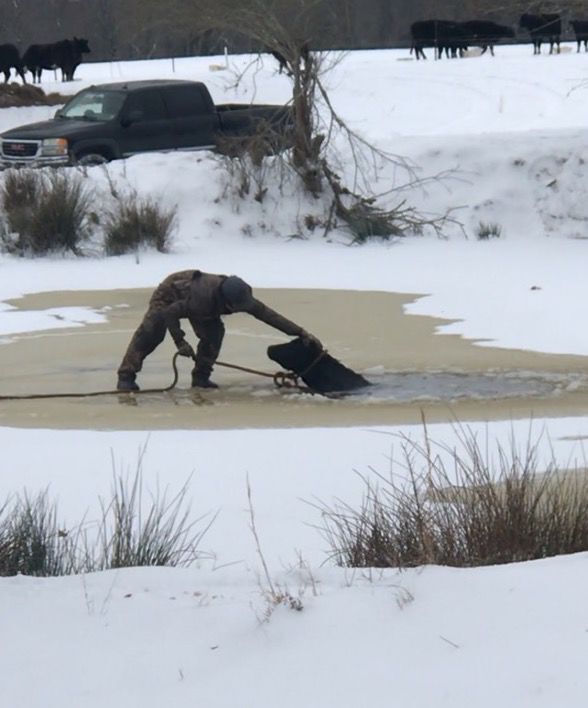 Paxton Gordon makes sure the rope is secured over the heifer's head. 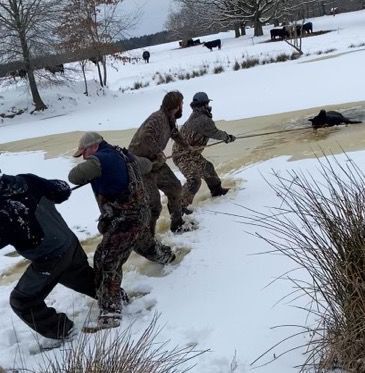 The group springs into action and pulls the heifer out of the frozen water. 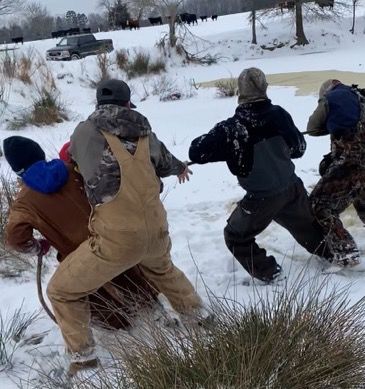 The team of animal rescuers at the end of the rope work hard to pull the heifer to safety.

Payton Gordon attempts to toss the rope over the heifer's head and pull her to safety with the help of his friends.

The heifer's head was barely visible above the icy pond water when the Good Samaritans sprang into action and pulled her out.

Photo courtesy of Cindy Robbins
1 of 3

Paxton Gordon makes sure the rope is secured over the heifer's head.

The group springs into action and pulls the heifer out of the frozen water.

The team of animal rescuers at the end of the rope work hard to pull the heifer to safety.

A local group of friends and family went from a sledding mode to a full animal rescue setting as they pulled a cow from a local pond that had fallen through the ice on Thursday.

The group had enjoyed a fun-filled day sledding behind Bethlehem Church according to Robert Gordon and someone noticed a distraught cow in a small pond beside the road on the way home.

"Kenneth and Cindy Robbins were out riding their grandkids around and saw her," Robert said. "Kenneth called his son Heath and told him, so he called Vaughnda Yates to find out who it belonged to.

"When we got back there we could see the people parked on the side of the road and beginning to hop the wire fence. This all happened around 3:45 on Thursday."

The bovine rescue team of nine sprang into action quickly as they rounded up rope from their vehicle in an to attempt to save the heifer.

"I happened to put the rope in back of Paxton's truck to be used to pull behind a four-wheeler a couple of days prior, but it was never used and I was just hoping that we had never gotten it out," Robert said. "I yelled to Brooke (Gordon) to bring the rope in the back of the truck and she gave it to Greer (Manning) and Kinsley (Gordon) then they ran it down there.

"It was like everybody kicked in another gear to help get the cow to safety."

Gordon's son Paxton was the person who ended up with the roping duties and he was able to get the rope over the animal's head after a few attempts.

"One of the guys asked if anyone had waders on and I had some on," Paxton said. "I was nervous about it, but John Walker (Young) talked me through it and calmed my nerves a little. I knew I had to get the rope on the cow and that's really all that I was thinking about.

"She kept heading away from me and I tried about three times to rope her and finally out of desperation she came swimming to me and I was able to get the rope around her neck."

After successfully completing the roping, Paxton gave the rope a tug to make sure it was secure and the remainder of the Good Samaritan team went to work and dragged the 350-pound heifer from the pond's icy waters.

'It felt amazing and I am so glad we were able to get to her when we did because I don't think she would have made it much longer," Paxton said.

Several members of the group proceeded to lead the heifer to a barn so that her owner, who was en route, could dry her off and check to make sure she would be okay.

"Everyone was relieved and very excited when we finally pulled the cow out," Robert said. "It was very nerve-wracking seeing your son standing on that ice and not knowing what the ice or the cow was going to do."

Jeff Gafford, owner of the heifer said on Friday that that she was "doing good" and back with the herd. The heifer was still in good condition on Saturday when the owner was contacted.

'I'm thankful to have good neighbors who happened to notice it and had enough help to get her out," Gafford said.

The event was quite an exciting end to a fun-filled day, but it was definitely an emotional high for all who participated and even those that watched the happenings unfold.

"It was a huge rush for sure," Paxton said. This is stuff you see on TV and think 'wow, how amazing', but to see it really happen and experience it hands-on is a feeling that I can't explain.

"I know everyone involved had all intentions of us getting this heifer out and to safety."

NASD to get $1.6 million in coronavirus funds

Falcons get in the zone, return to title game