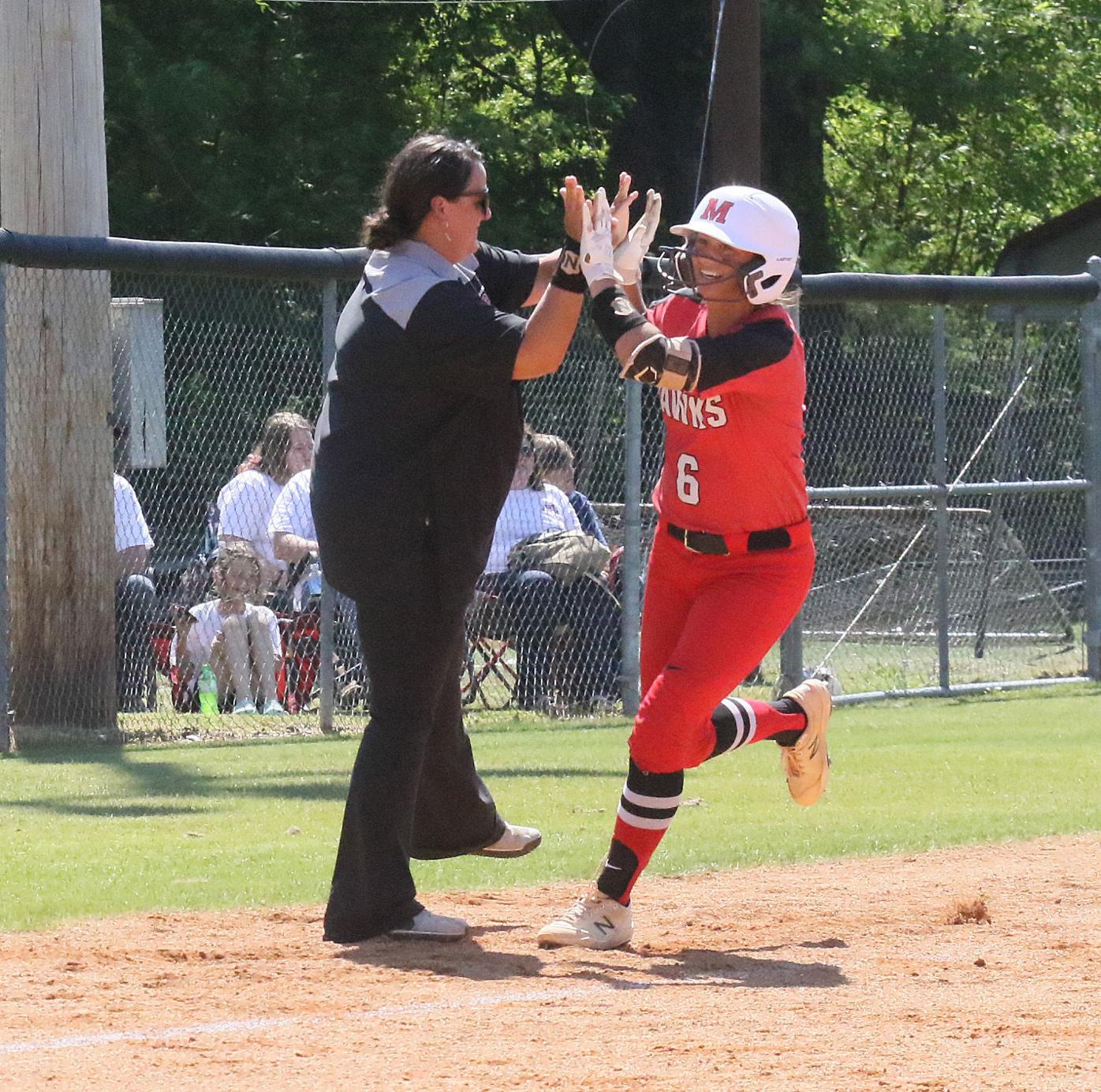 Kinsley Gordon is congratulated by her mom and coach, Brooke Gordon, as she rounds third following her 3-run homer in the bottom of the sixth inning. 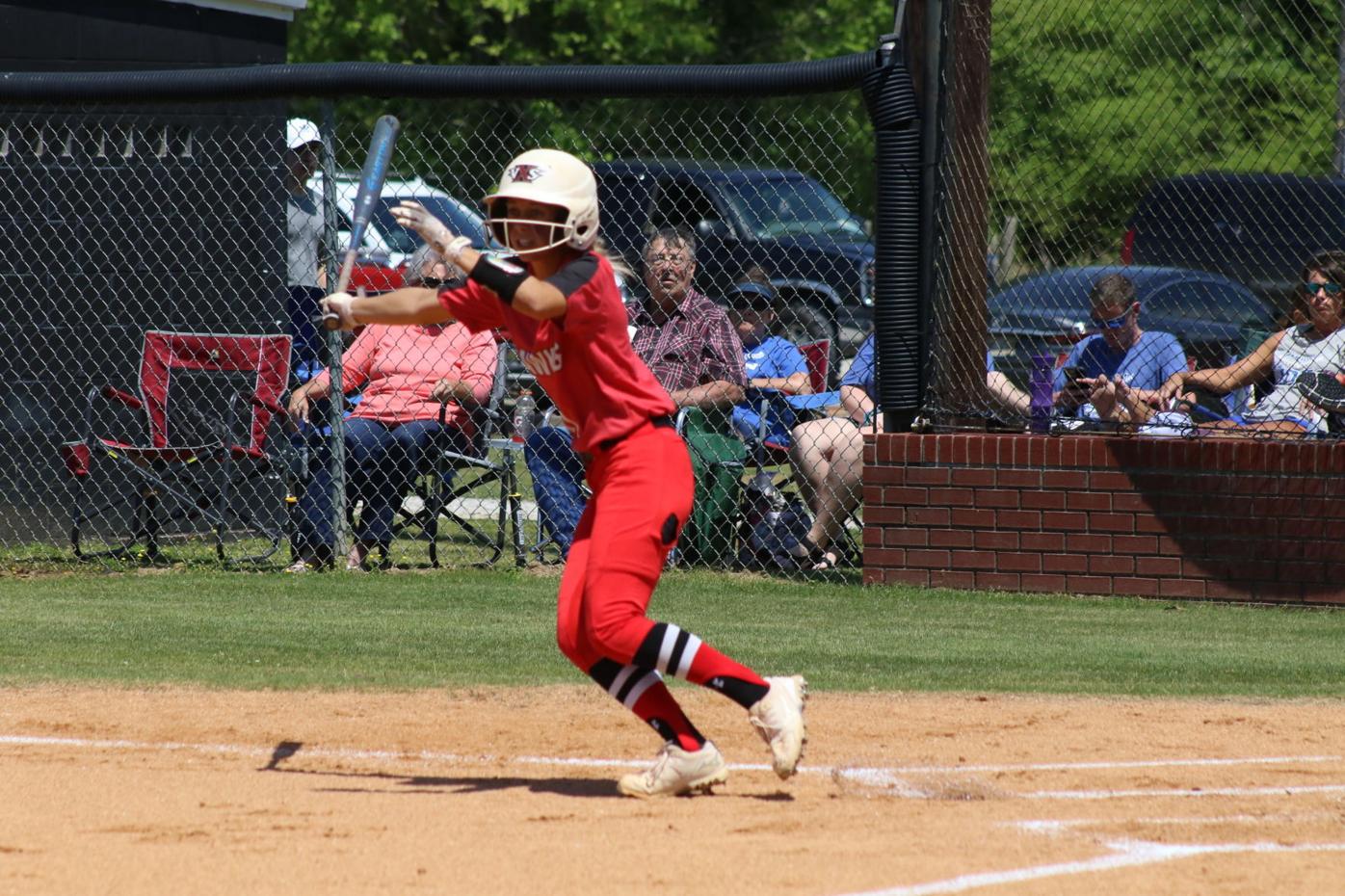 Sarah Kate Thompson slapped a single over short to reach base in the first inning.

The Myrtle Lady Hawks break out into celebration after the final out as they won the 1A North Championship 2-0 over Hamilton and will now play Stringer for the state championship.

Kinsley Gordon and Caylie Streich celebrate the final out on Saturday as both played major roles in the Myrtle win as Gordon hit a 3-run homer and Streich threw a shutout in the circle for the 6-0 win over Hamilton.

By Melissa Meador Monroe Journal
1 of 2

Kinsley Gordon is congratulated by her mom and coach, Brooke Gordon, as she rounds third following her 3-run homer in the bottom of the sixth inning.

Sarah Kate Thompson slapped a single over short to reach base in the first inning.

MYRTLE – Myrtle has tough memories of the last time it faced Hamilton in the playoffs – a three-game loss in the 2018 state championship series.

The Lady Hawks (26-4) got their redemption on Saturday, finishing off a two-game shutout sweep with a 6-0 win to seal their trip to the Class 1A state championship series against Stringer on Wednesday.

"We had some that played in that series, and they wanted it bad," Myrtle coach Brooke Gordon said. "Our four seniors, I have had since tee-ball, and we wanted to go out especially with them.

Myrtle pitcher Caylie Streich was nearly untouchable in the two games, allowing three hits in Game 2 and striking out 13 to give her 22 for the series. Streich walked just two batters in the two-game series and none in Game 2.

"My curve ball was working well both days," Streich said. "Yesterday I didn't have as much luck getting the call, but if you can get them to chase it, that's all that matters."

"They (Hamilton) had not seen pitching like hers, she's one of a kind and we're glad to have her," Brooke said. "She was on, as usual."

Olivia Decanter drove in the first run in the third with an RBI grounder after back-to-back hits from Emma Mayer and Kinsley Gordon.

Streich had an RBI bunt single in a two-run fifth inning, and Gordon put the exclamation point on the win with a long three-run blast in the sixth.

"My best friend (Kinzie Claire Waits) got quarantined, and I was going to give it all I had to give her a home run," Kinsley said. "That one was for my best friend."

Gordon's homer in the sixth followed up a walk from Sarah Kate Thompson and a single from Mayer and put the game out of reach.

Hamilton's three hits came from Mallory Kendall and Faith Imel, back-to-back in the third, and from Aniston Atkins in the sixth.

"We were kinda devastated three years ago, so it's great to be going back to the championship, we're excited and it's overwhelming.

"Like I said earlier, I've had some of these girls since T-ball and with my child on there and when you can experience that, it's special."

Caylie Streich threw a four-hitter and her Myrtle teammates pounded out 11 hits to win game one of the series over Hamilton by a 7-0 final.

The teams battled through three innings of scoreless ball until Myrtle hung a run up in the top of the fourth.

They followed with two runs in the fifth and added four insurance runs in the top of the seventh for the 7-0 final verdict.

Olivia Decanter had a perfect night at the plate, going 4 for 4 with four RBIs to pace the Lady Hawks at the plate.

Decanter, Cora Kelly and Keragen McCullough all had doubles for the Myrtle attack.

Sarah Kate Thompson went 2 for 3 in the leadoff spot and scored two runs.

Myrtle now moves on the the 1A Softball State Championship series at Mississippi State. They will face Stringer who swept their 1A South series over Sebastopol 2-0.

Myrtle will begin the day of softball at Nusz Park with a 1:30 game on Wednesday. The 2A and 3A softball championship series will also be at Nusz Park and will follow.

Game two will take place at noon on Thursday and if necessary, game three would be on Friday with first pitch at 11:00 a.m.

Storm’s result in Union: Most roads under water, stranded motorists, but no reported injuries

Planning under way for the Tallahatchie River Run Sept.25