Tommy Sappington stands inside his store 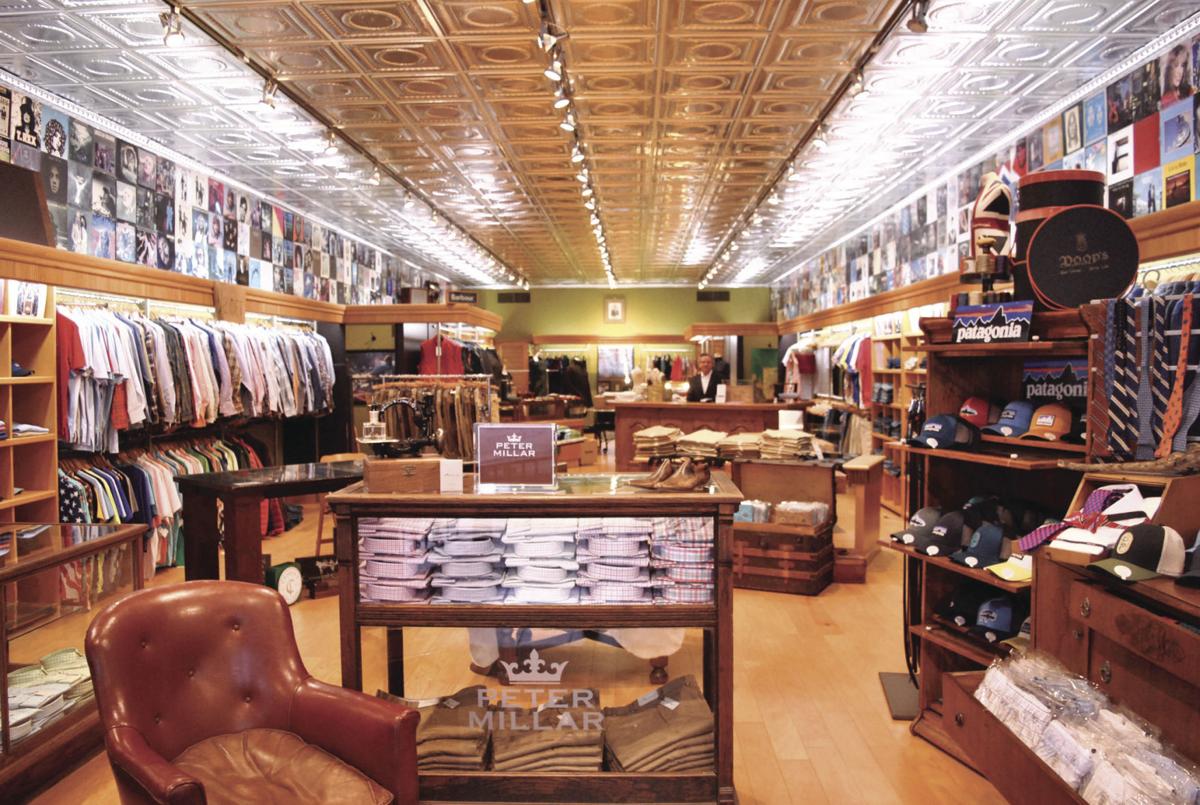 Part of the store interior 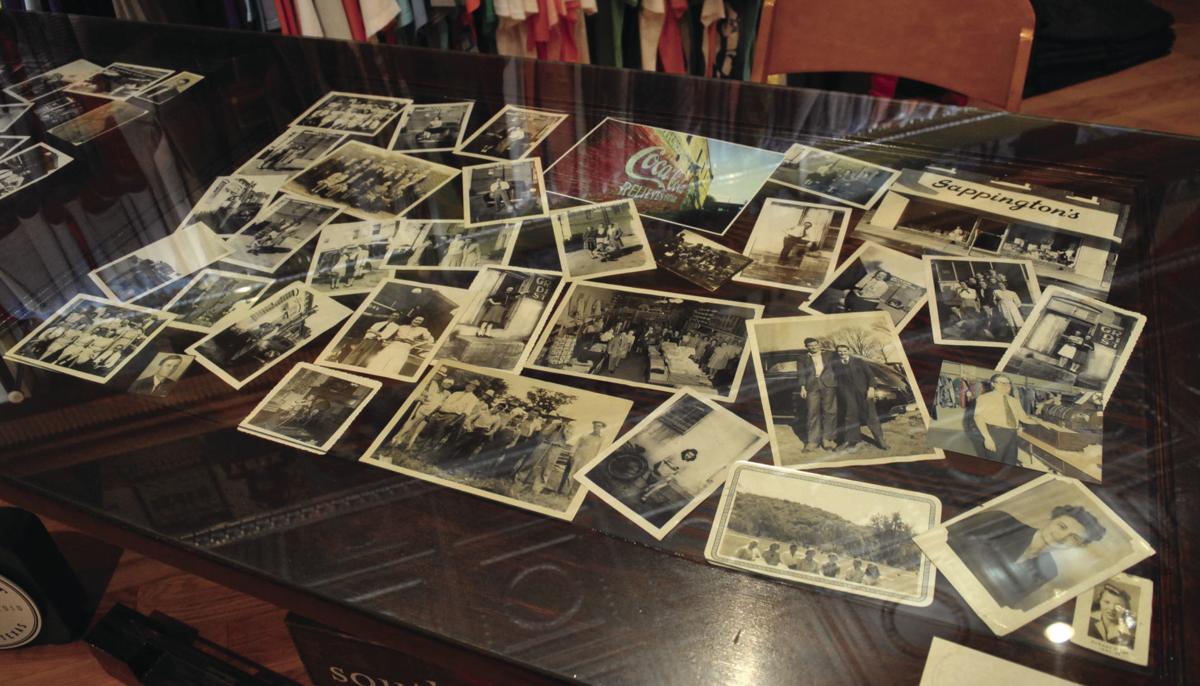 On display are old photos of Sappington's family and previous businesses 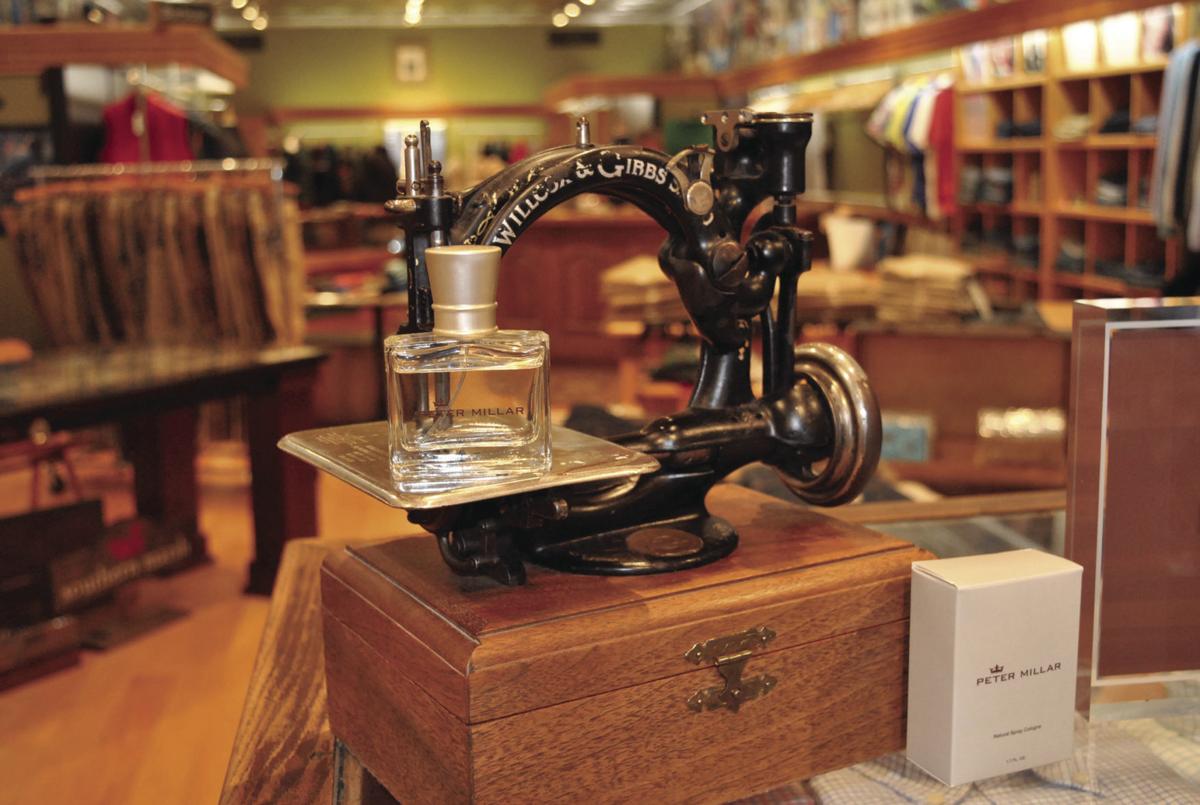 Tommy Sappington stands inside his store

Part of the store interior

On display are old photos of Sappington's family and previous businesses

Tommy Sappington has been going to clothes markets since he was seven years old so it should not be surprising that he has the business in his blood.

T. Sappington & Company, the store he operates with his wife Martha Carol, represents the third generation of clothing businesses his family has been involved in.

His father, Roy Harold, first worked at Rogers Drug Co. when he was 16, walking the seven miles to and from his Wallerville home along the railroad tracks each day. But after serving in World War II where he flew 50 B-17 missions over Germany, Roy Harold returned home where he worked for Winburn Simmons. The Simmons clothing store was in the building where Vintage Market is today, Tommy said, and his father worked there 12 years.

“He became part-owner and in 1956 went into business for himself,” Sappington said. Sappington’s Dry Goods opened where Two Doors Down is today operatng until 1971. But in the meantime, the Sappingtons purchased a building first owned by First National Bank. Robert Owen Russell had had a dollar store there until it burned in 1969. “I had to clean the mess up,” Sappington said, and the store did move into 102 W. Bankhead St. in 1971.

Tommy began working for his dad when he was 17 but said his parents has asked his opinion on clothes even when he was a youngster. He eventually became part-owner and he and his wife bought the business in 1986 when Roy Harold decided to retire for health reasons.

Sappington says the clothing business is basically gambling. “I’m now ordering for next fall,” he said. “But things can go in and out of style so quickly, even while you’re sitting there buying.”

Timeliness is a factor but competition has changed as well.

Sappington said he was the lowest in prices for a long time but eventually had to upgrade.

“Now we have to figure out how to differentiate what we do from everyone else,” he said.

And like other businesses, Amazon and its kin have had an impact. For awhile, he just thought people were taking photos of clothes they were looking at until he learned there were applications that can look up and compare prices.

One way he competes is by offering unusual lines that may be hard to find around here.

He also does most basic alterations in-house, using vintage sewing machines, one of which was rescued from the Irwin B. Schwabe shirt factory by his father and repaired by himself. In addition to other services, he has been known to deliver items, even out of town in some circumstances.

Sappington said he is focused on making his store a welcoming place where people want to come in, look around, chat for a while and perhaps buy something. His vintage sound system plays a variety of music which can be heard out on the street as well as inside the store and vintage record sleeves are displayed throughout (he has the original vinyl for all of them).

He wants to avoid being negative or saying no to customers as much as possible. His request to not bring in food or drink is discreet almost to the point of being invisible.

“The importance of first impressions is something I learned from the Main Street Program,” he said.

Inside the store is a collection of old restored cash registers and other items and his window displays are always eye-catching, but he takes no credit for the displays.

“My wife goes the extra mile for them,” he said.

n fact, he gives her credit for the store’s continued existence.

“In 2003 I had given up,” he said. “Business was the worst it had ever been,” partly due to competition from Wal-Mart but mostly the Mall at Barnes Crossing.

“She had been working for seven years and I told her, find me two things that would help,” he said.

Martha Carol did some research and suggested two lines. “I called, the salesmen were kind and came by,” he said. The two lines were premium denim and young contemporary women’s apparel.

“It was instant,” he said. “I couldn’t get clothes out of the box before they were out of here.”

“I had given up, but just refused to quit,” he said. Business had been so bad that he had fallen back on his woodworking as necessary income. “’Hobby’ is the most offensive thing people could say about my woodworking,” he said. “I was woodworking three nights a week to fix up buildings Billy Wiseman and I had bought,” he said, and selling other items. “This was my house payment, about 60 percent of my income for two years.”

It helped that the quality of his work was good enough for him to be named to the Mississippi Craftsmen Guild as the first member from North Mississippi, but he has had to curtail woodworking in recent years for health reasons.

“I fed off Van-Atkins’ advertising for 10 years,” he said, but things eventually got better.

However, he also credits others and New Albany itself for helping business.

The Sappingtons remodeled the store about 10 years ago “to reflect the quality of our merchandise and our customers,” he said. Those customers come from Tupelo and Oxford and other places as well as from Union County.

“I hope to work maybe five more years,” he said. There is really no one in the family to take over the store but, as he says, every beginning has an end.

Two years ago, he said, he had the largest sale day in the history of the store, in just a four-hour period during Holiday Open House. That, he also attributes in part to Main Street.

“Your downtown is the living room of the community,” he said. “It is a blessing to still be here and I appreciate everybody who walks through the door.”

“A friend told me, if you like what you do half the time you are way ahead of most people,” he said. That would put T. Sappington & Co. way ahead.