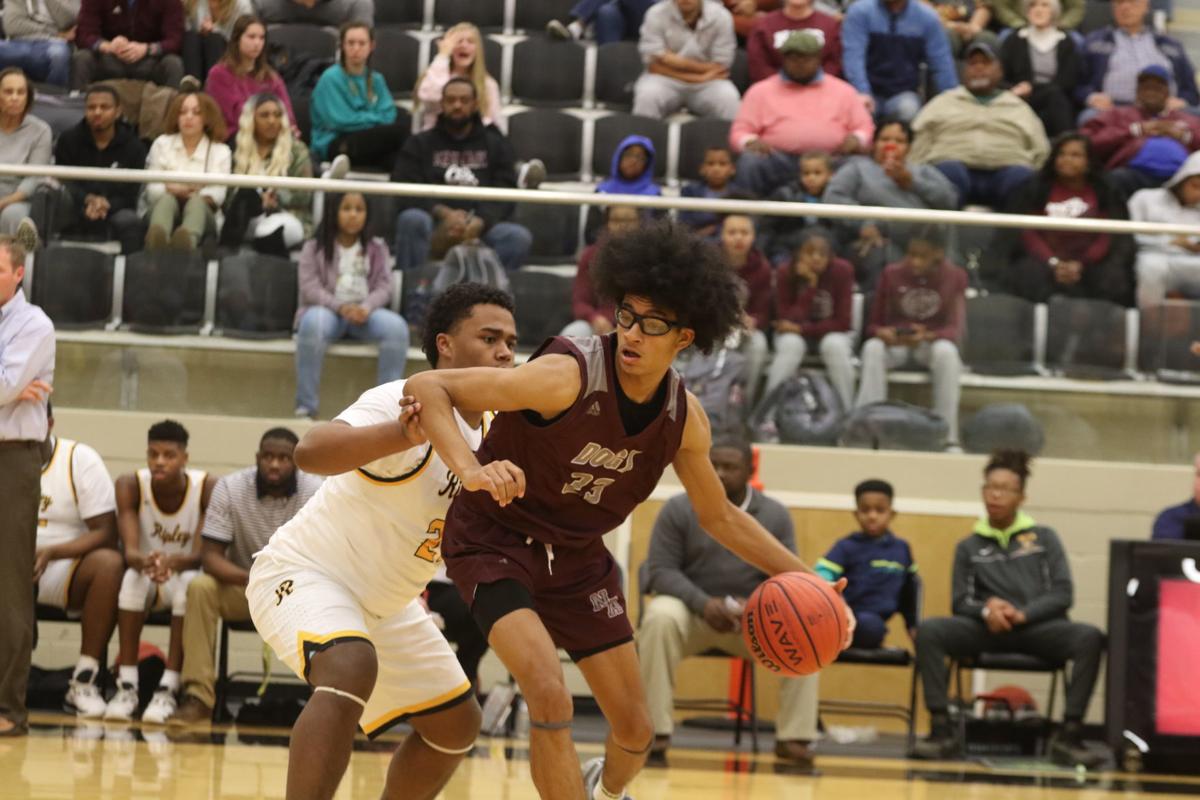 Michael Smith dribbles across the top of the circle as Ripley's Bralen McDonald applies the pressure defensively. 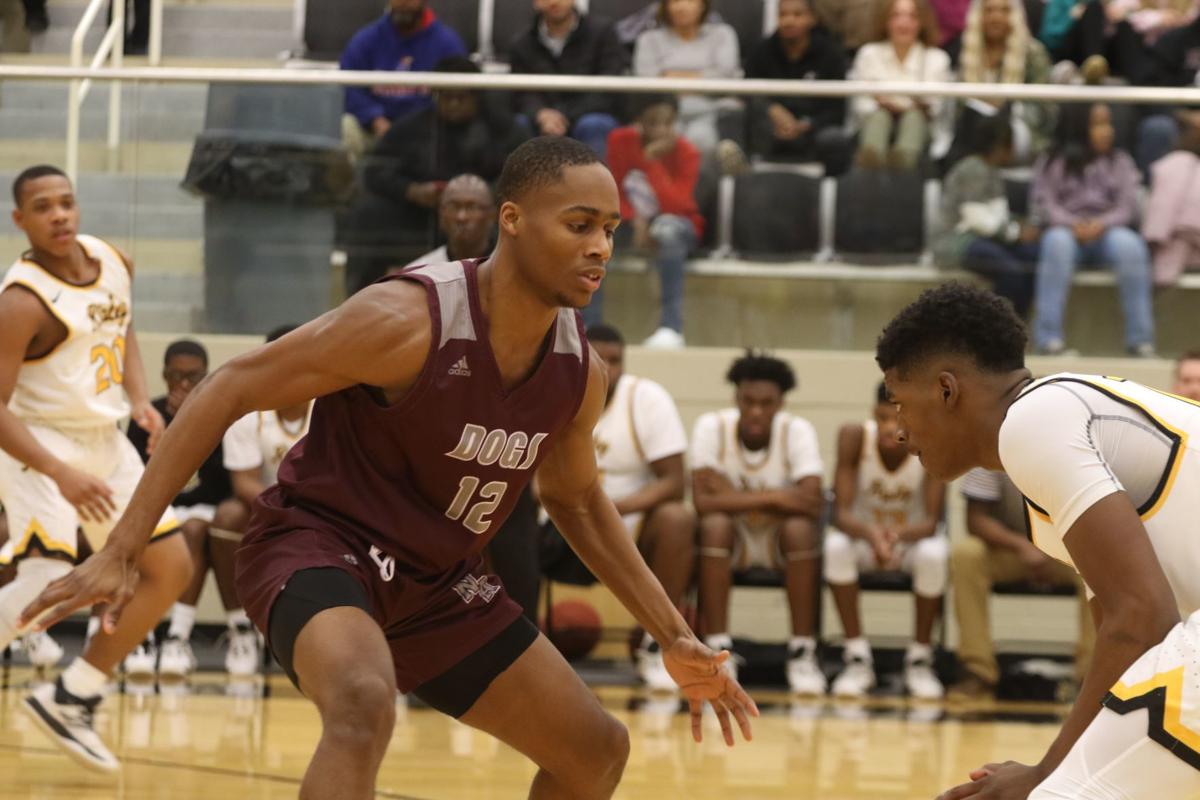 Michael Casey of New Albany goes one on one against a Ripley player. 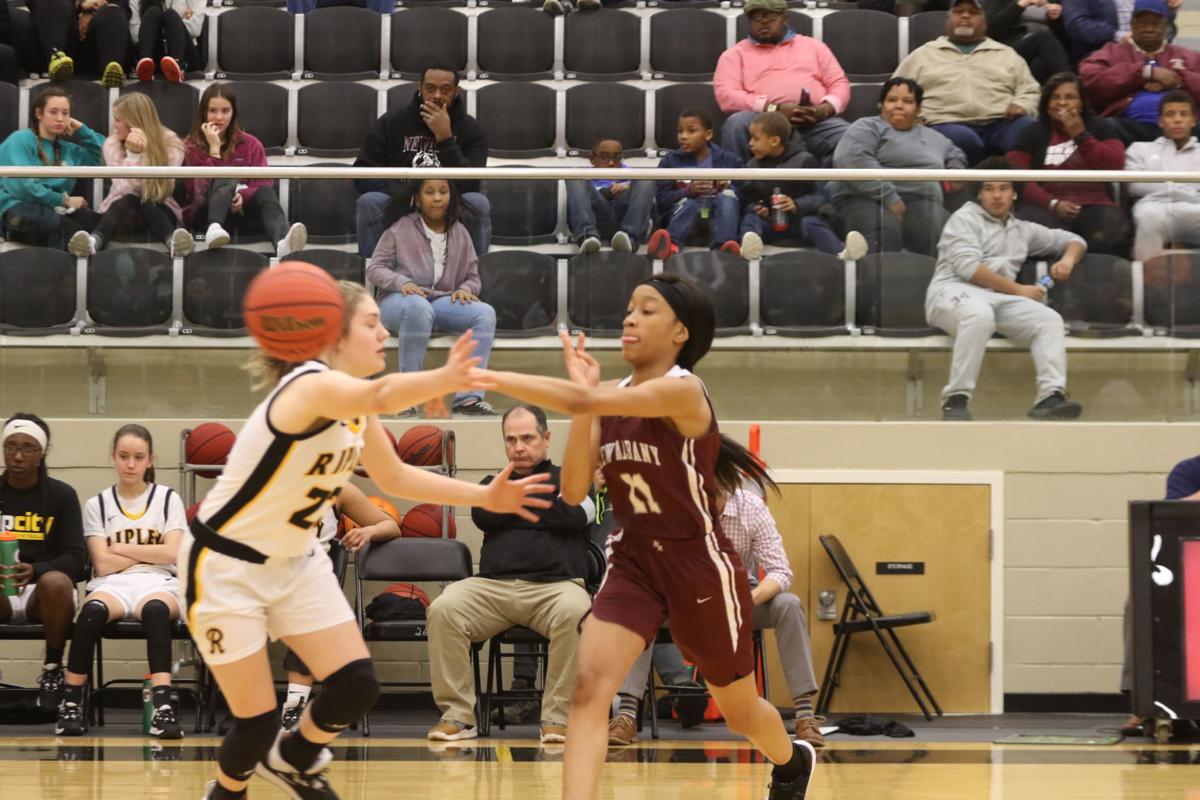 Madison McDonald passes to a Lady Bulldog teammate. McDonald came off the bench to lead New Albany in scoring with 10 points. 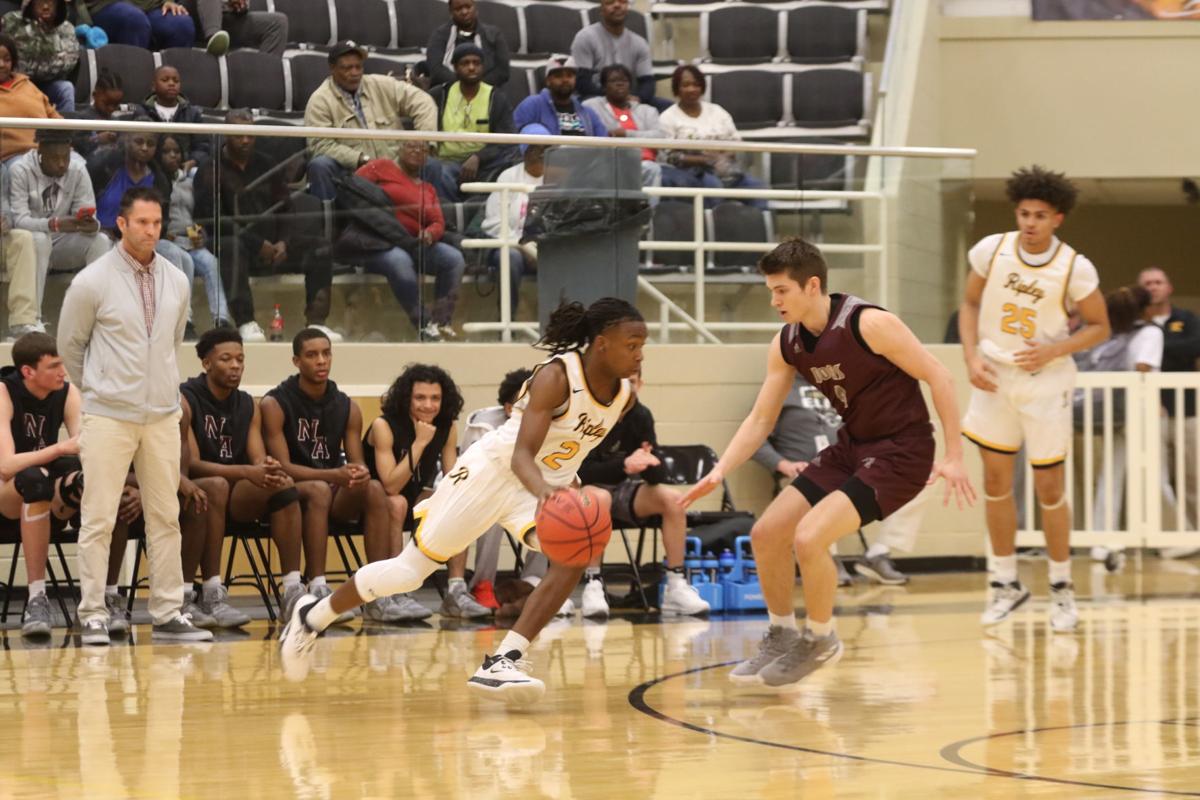 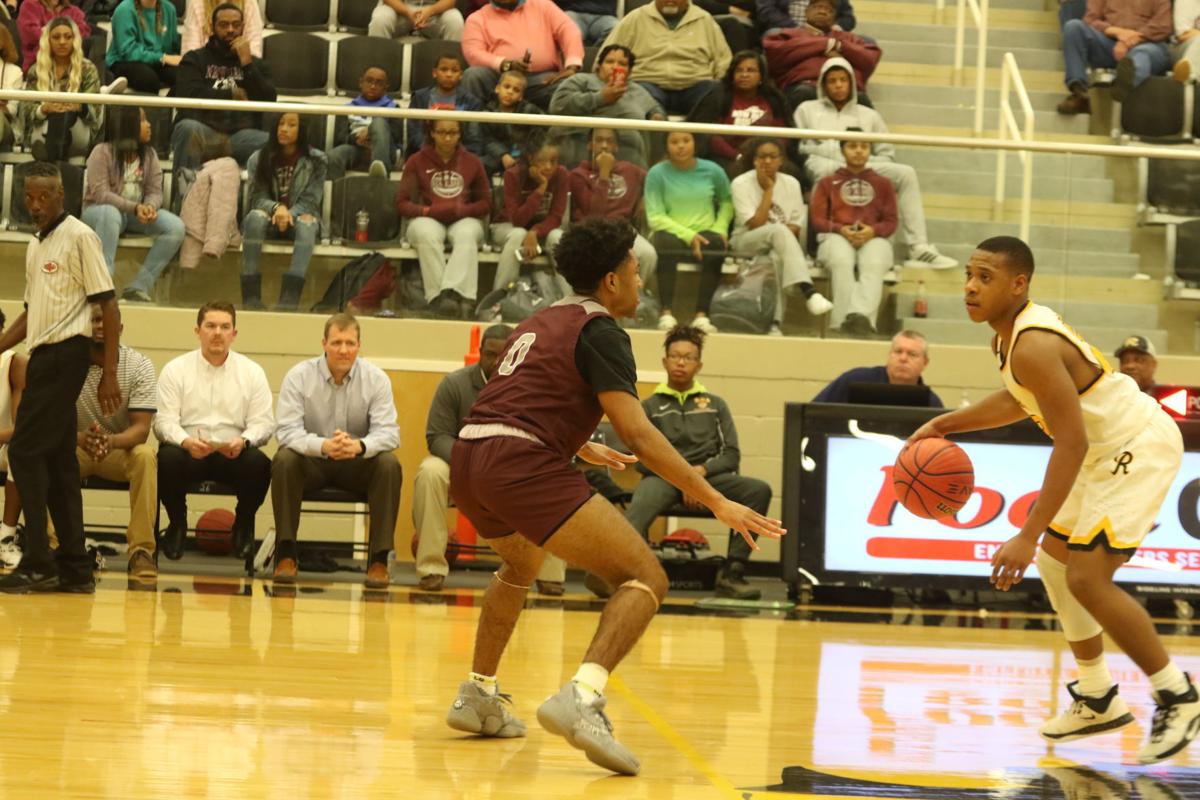 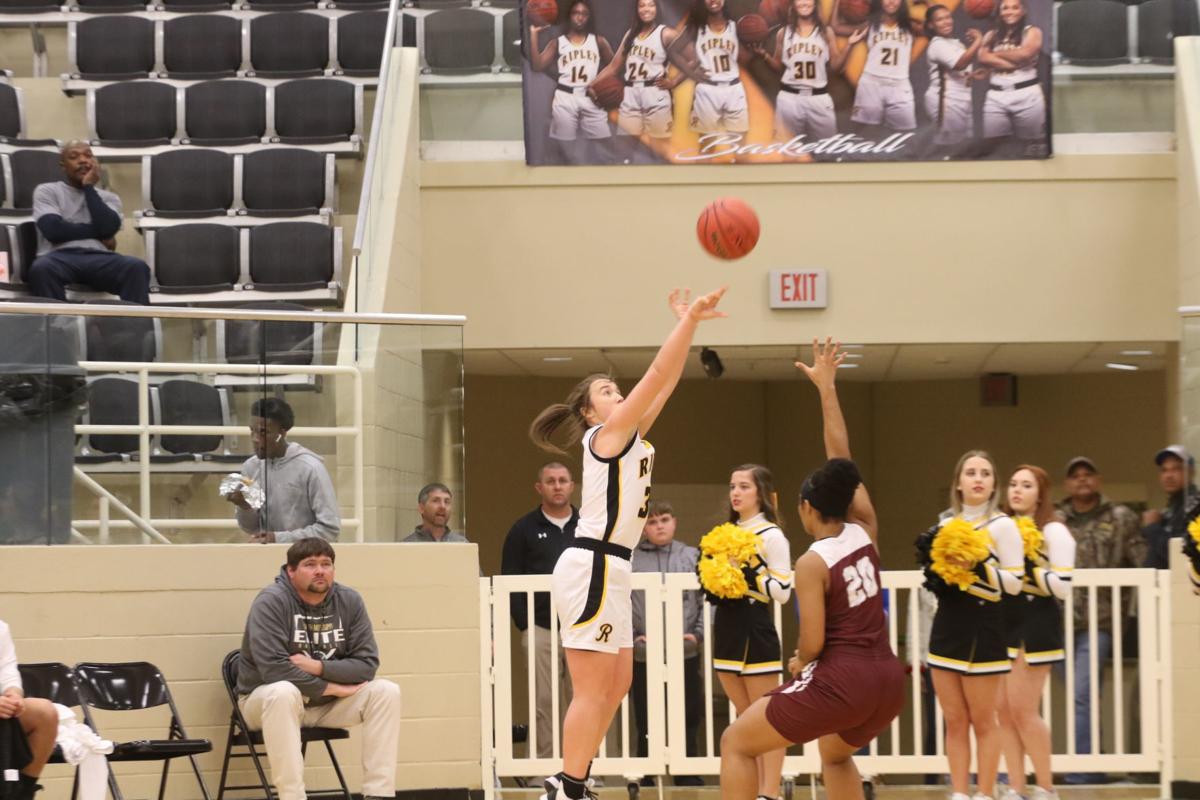 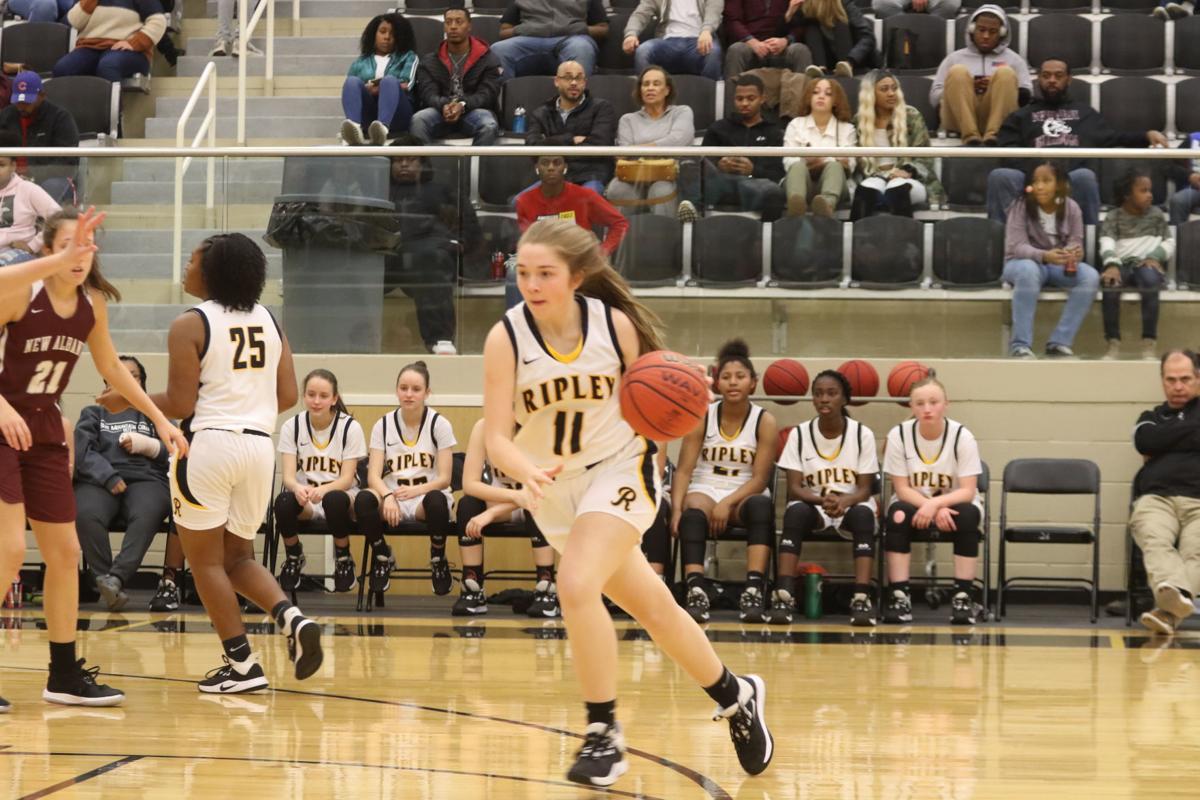 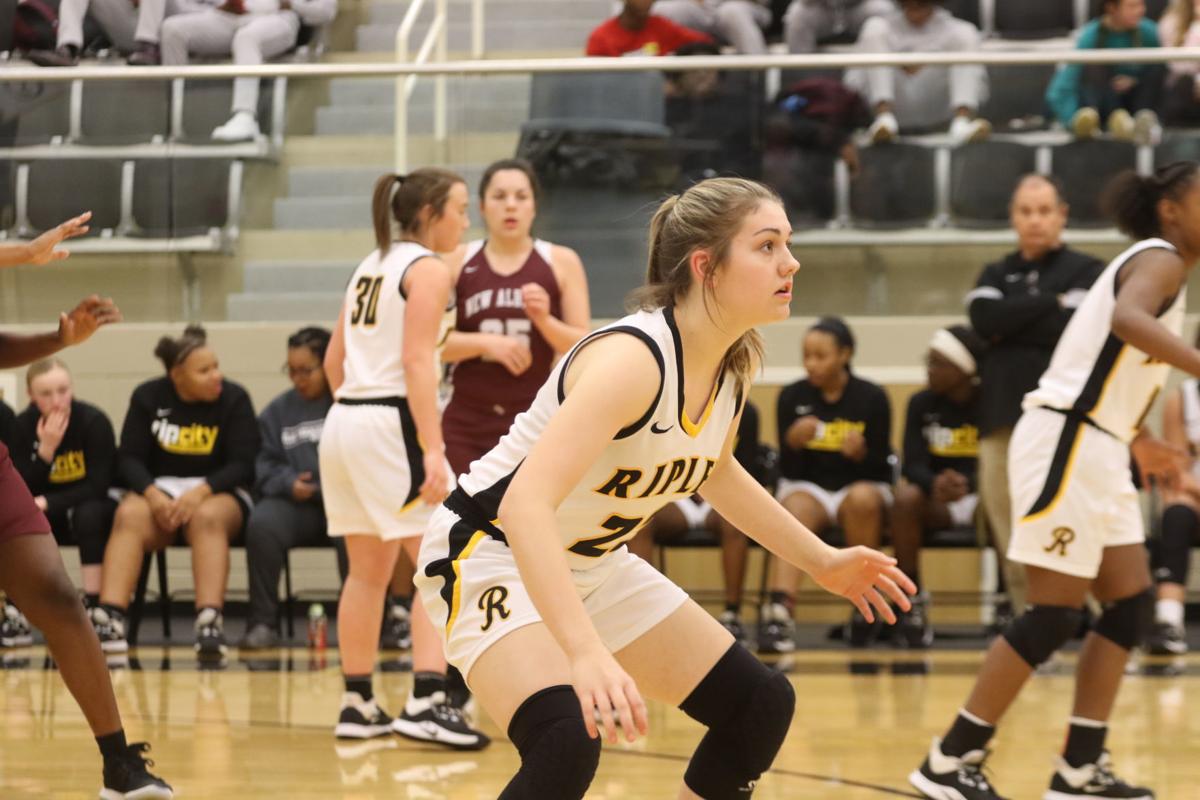 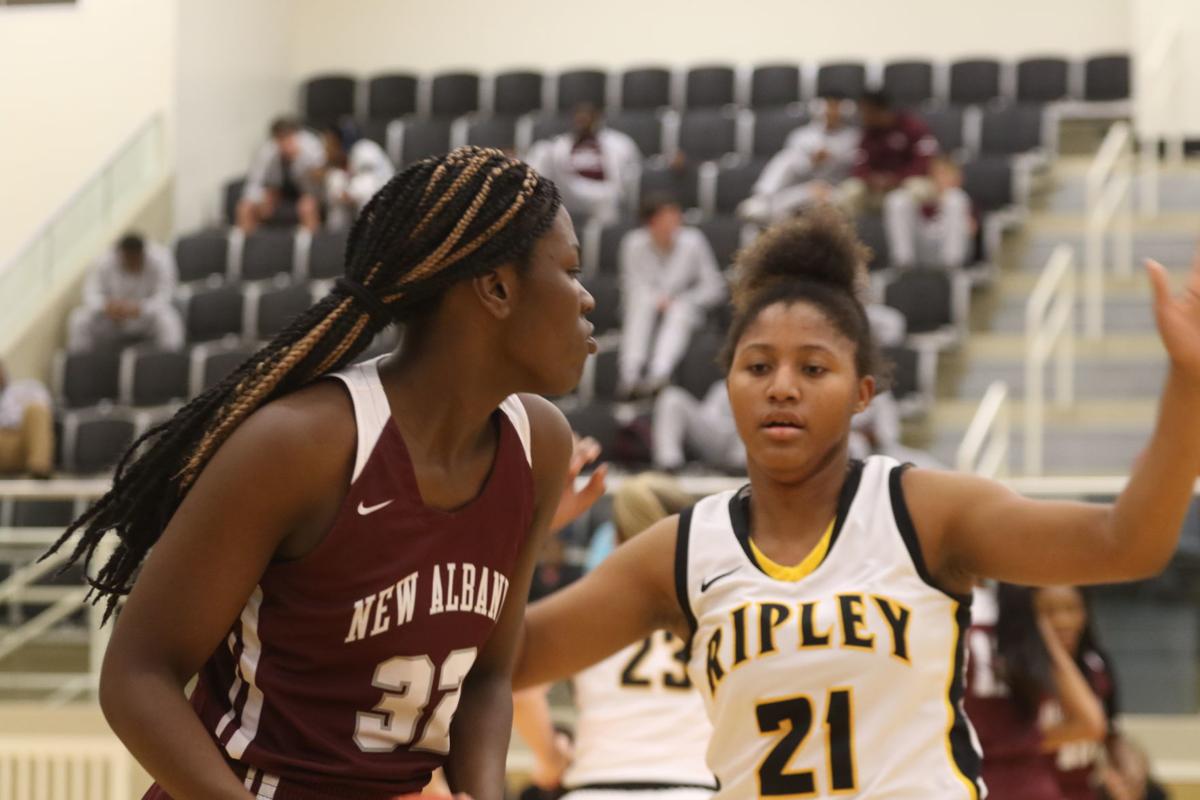 Analisa Cheairs of New Albany and Siarra Jackson of Ripley. 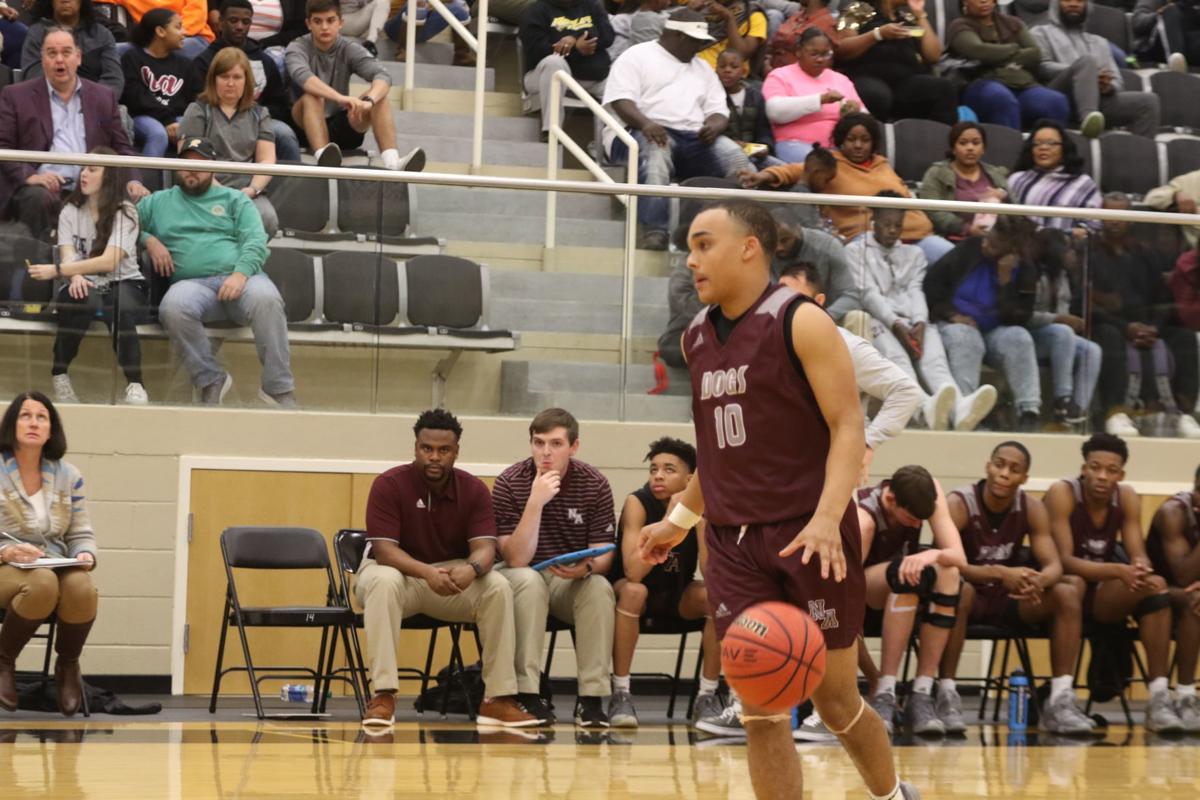 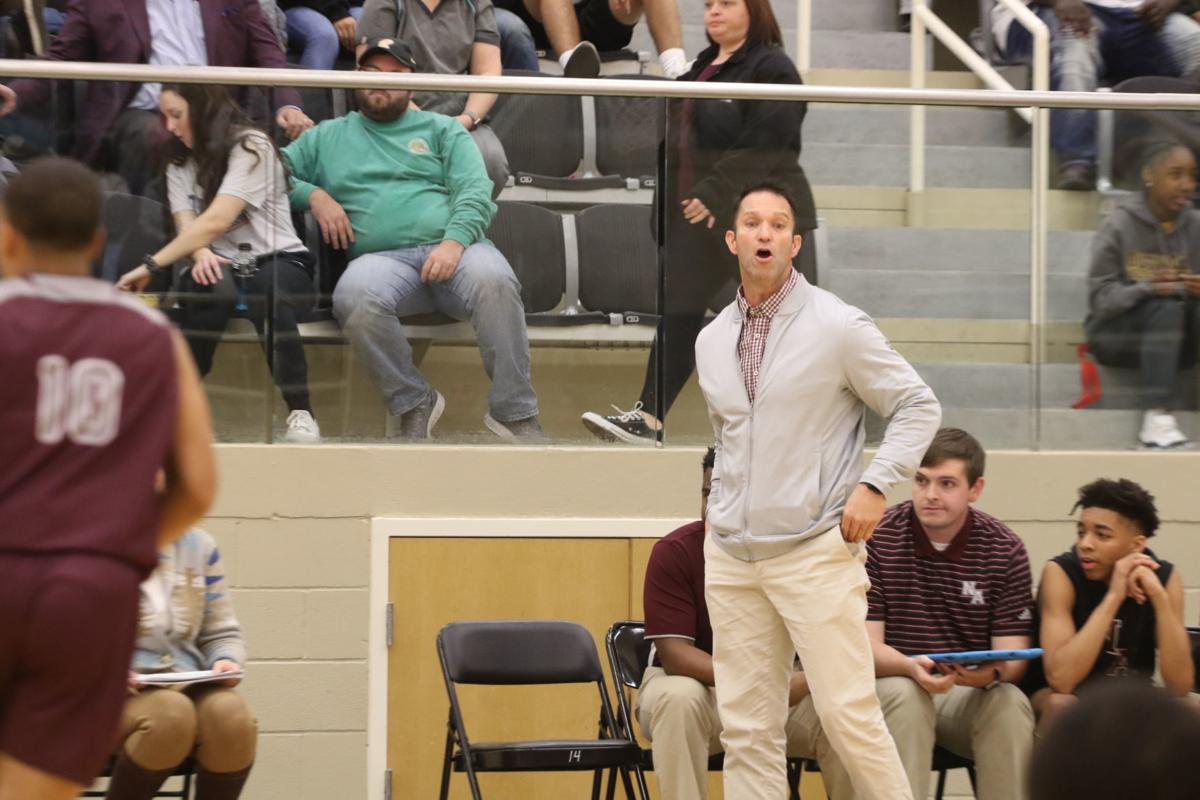 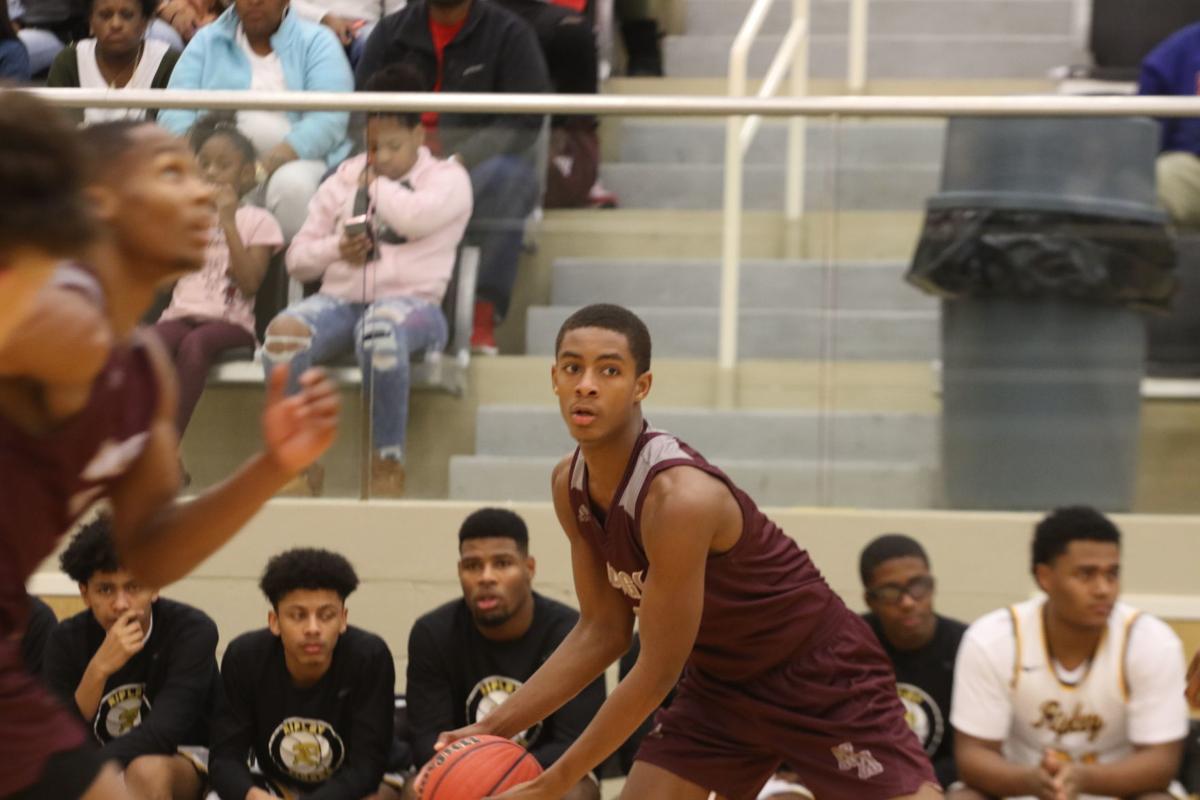 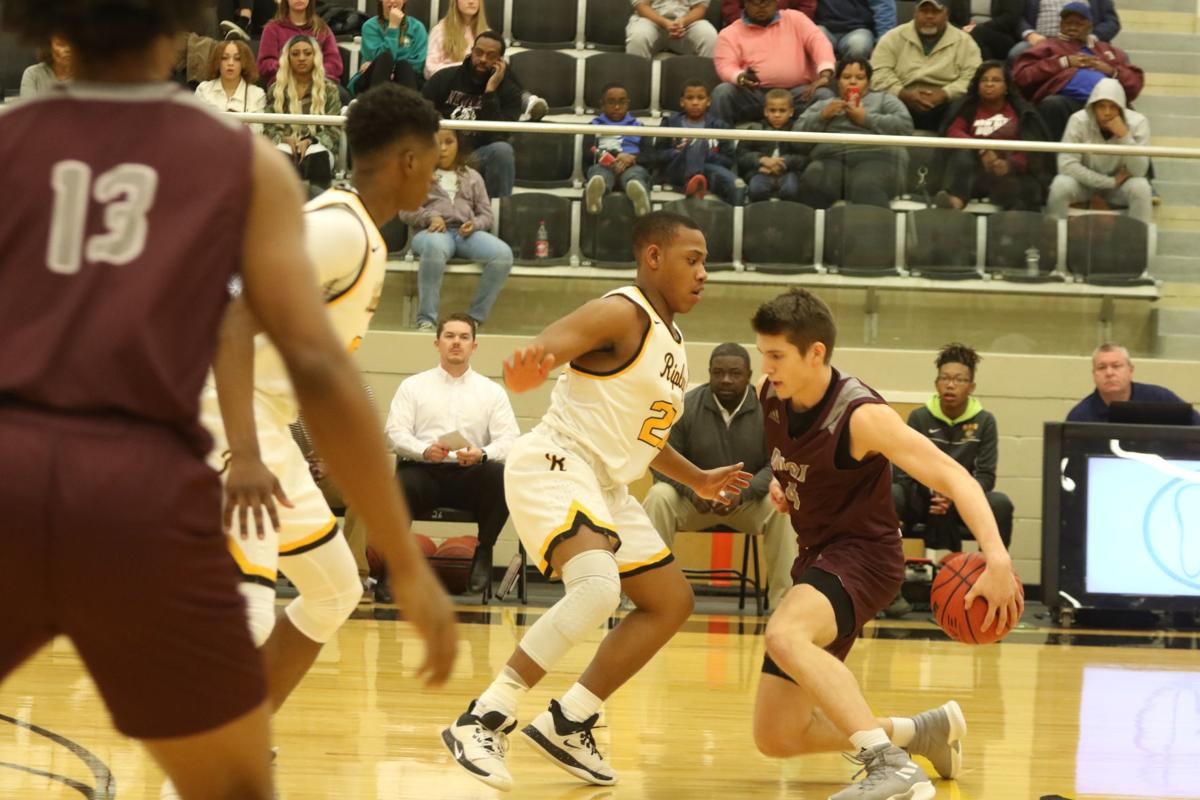 New Albany's Artaveion High works in the paint against Asa Howard of Ripley on Tuesday.

By Dennis Clayton Sports Editor
1 of 14

Michael Smith dribbles across the top of the circle as Ripley's Bralen McDonald applies the pressure defensively.

Michael Casey of New Albany goes one on one against a Ripley player.

Madison McDonald passes to a Lady Bulldog teammate. McDonald came off the bench to lead New Albany in scoring with 10 points.

Analisa Cheairs of New Albany and Siarra Jackson of Ripley.

RIPLEY - The Ripley Tigers pounced on New Albany early on Tuesday night and opened up a 10-point lead at 17-7 by the end of the first quarter and went on to win the 1-4A division contest by a score of 48-38.

The Tigers took sole possession of first place in the division with the win.

“I thought for four quarters we defended really well, showed some discipline and stuck to our game plan of making things as hard as we could and just competed,” Ripley coach Adam Kirk said. “We told them as we left to go to warm up that we had to get off to a good start.

We knew they were going to come in with energy and we thought if we could get off to a good start that it might give us the momentum to carry us through the game. It did and it held up.”

New Albany made a run early in the third quarter and closed to within four at 29-25, but Ripley slammed the door of opportunity on the Bulldogs by going on a 13-6 run to close the period.

New Albany trailed 27-19 at the half, but the Bulldogs appeared to be in rally mode after buckets by Mitchell Shettles and Artaveion High pulled the Bulldogs to within 27-23. A Ripley basket gave the Tigers a six point lead, but Michael Casey's goal again made it a four point contest at 29-25.

However, that was the closest the Bulldogs would come as the Tigers got hot and reeled off the seven point scoring advantage to pad their lead.

Jesus Reudas scored 18 for the Tigers in the win while Asa Howard hit for 12 points.

(G) RIPLEY 64, NEW ALBANY 33: Ripley jumped out to an early 10-0 in the first quarter and then bombed the Lady Bulldogs for 30 second period points and won going away, 64-33. The Lady Bulldogs did not score until 40 seconds were left in the opening quarter as Kelsey Ledbetter hit a three from the wing to cut the score to 10-3.

Ripley hit six 3-pointers during the second period as Summer Kirkman drained three, Amelya Hatch hit two and Sidney Flake buried one as the teams went to half with Ripley leading 40-10.

TURNING POINT: Ripley’s fast start proved to be the difference as the Tigers raced out to a 7-0 lead and held New Albany scoreless until the 4:12 mark in the first period.

POINT MAKER: Jesus Reudas scored 18 points for Ripley including 10 in the third quarter.

TALKING POINT: “The key tonight was to control the line and to make all their threes contested, they’ve got some really good shooters. We just wanted to contest them and live with the results.” Kirk said.