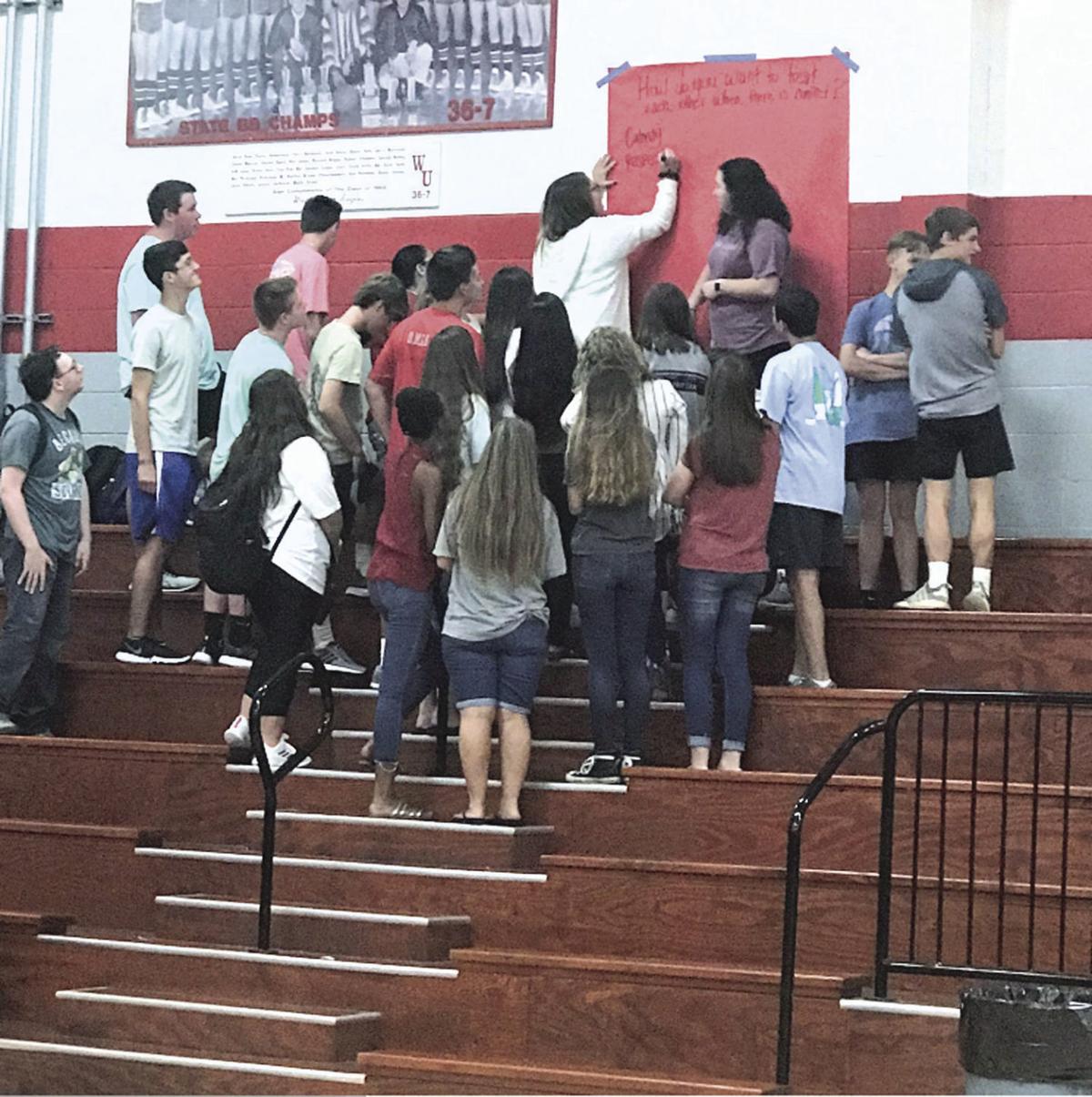 Students in the 9th-12th graders came together Aug. 12 to develop a social contract. 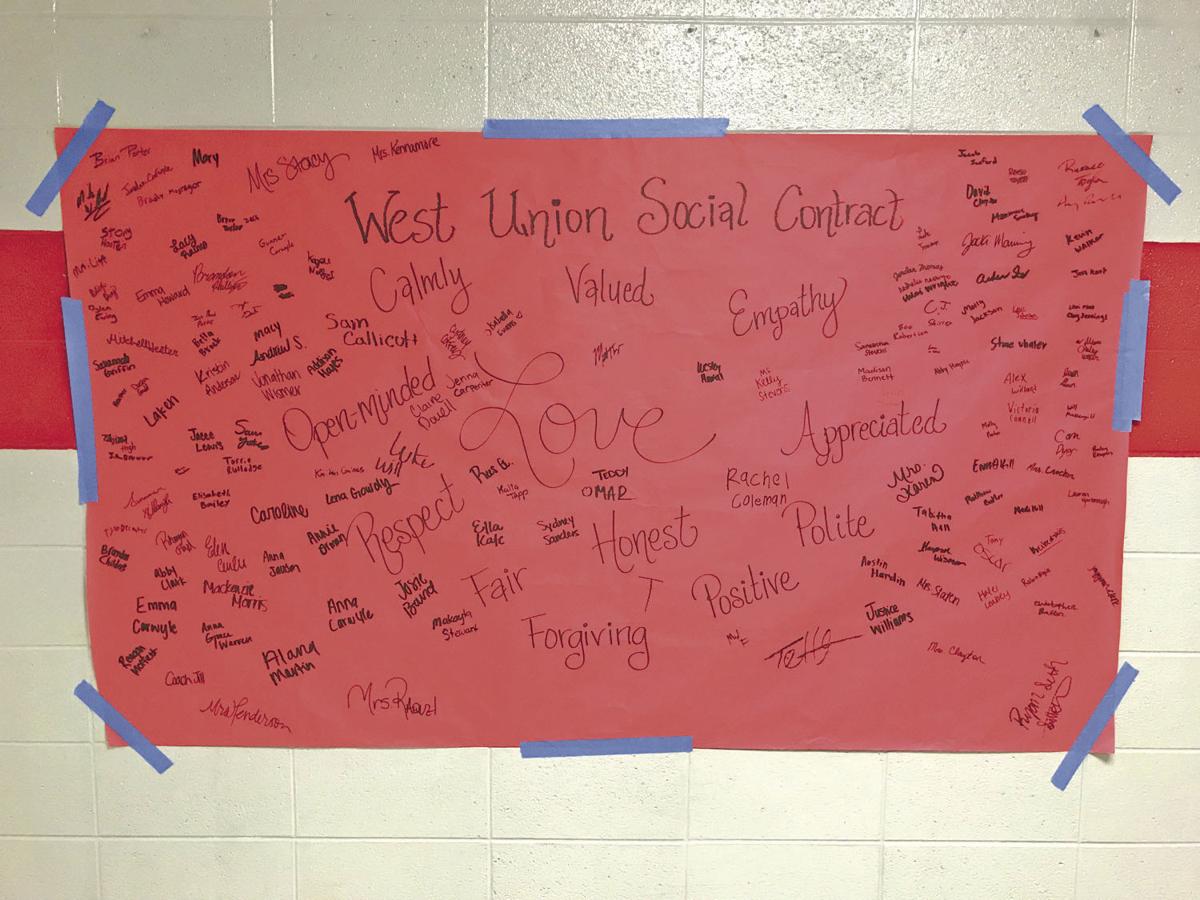 The social contract contains a group of words that serve as the basis for students and staff members to build relationships with one another.

Students in the 9th-12th graders came together Aug. 12 to develop a social contract.

The social contract contains a group of words that serve as the basis for students and staff members to build relationships with one another.

In an effort to boost morale among students, the Union County School District and West Union Attendance Center in particular began implementing new strategies meet students at their level.

Approximately 50 teachers and staff members from around the school district attended a two-day training program known as "Capturing Kids Hearts." The program was created and developed by the Flippen Group, a consulting group based in College Station, Texas for the purpose of building relationships between students and staff and helping develop skills to handle conflict when it arises.

In order to answer those questions, Taylor said they gathered students in the 9th through 12th grades together on Aug. 12 and developed eight or nine words to form the foundation of the contract, including words like respect, same, fair, acknowledge and empathy.

"Once we developed the social contract around those words, all of the students and staff signed it," Taylor said. "Then we talked about the accountability of holding each other to the contract. That's the real challenge. Staff members must hold students accountable, but students can also hold staff accountable. If we hold each other accountable and try to fix issues that come up, we develop a culture that, hopefully, everyone wants to be a part of. We want to make West Union a place where students want to come to school every day."

Taylor said that the Capturing Kids' Hearts training program modeled the development of the social contract and taught attendees how to engage students by finding out their needs and ways to help them meet those needs.

"During the training, one of the things they teach you to do is greet each student at the door," he said. "The first day of school we tried to make sure we shook every student's hand or asked them how they're doing as they walked in. Just those simple acts can help a student feel valued."

Two other programs at West Union that fall in line with the mission of Capturing Kids' Hearts, but aren't related to the Flippen Group are the Talon Teams and Eagle of the Week.

"The Talon Teams are based on an idea we borrowed from Booneville [school]," said Matt Thompson, West Union's assistant principal. "It's an opportunity for everyone to be a part of a team or a family here at the school."

These teams are made up of students in the 7th through 12th grades and meet at least once a month, Thompson said. Each team averages about 10 students and is led by a staff member who keeps up with the students and holds them accountable.

"We do that to try to ensure every student is watched over and cared for," Thompson said. "We've had a really good response. Most of the feedback we get from students is that they make friendships that they otherwise wouldn't have."

Luke Willard, a senior at West Union and one of the Talon Team mentors, thinks both programs are really good.

"[The social contract] gets the whole school together," he said. "It makes people connect more, like the people who don't talk much. Everyone got into the meeting."

Willard said the social contract has helped him try to identify with other people.

"I just try to put myself into other people's shoes," he said. "How would I feel if it was my first day and I was sitting by myself at lunch? I try to be as friendly as I can be and make everyone feel with the program."

Willard said he wants to be a role model for younger students.

"For the baseball and basketball team, I try to work really hard in the weight room, run all of my sprints out and do everything the coaches ask me to do," he said. "I just want to let the younger guys know that 'Hey, Luke's doing it, we need to be doing it too."

"Last year, we had a new student and they were sitting by themselves at lunch," Taylor said. "Luke took it upon himself to go talk to them. That's the kind of culture we're trying to create here. We want everyone to feel valued and I was really proud of Luke for that."

Taylor went on to say that Capturing Kids' Hearts is not a new discipline policy.

"This is more a model of how we're going to treat each other and hold each other accountable," he said. "If an issue arises, and someone is bothered by something someone else says or does, we would challenge that person to put themselves in the other person's shoes, whether a staff member or student. One of our words is empathy and we ask them to be empathetic toward the other person.

"The biggest challenge is keeping each other accountable," Taylor continued. "It's going to be difficult, but I think we're up to that challenge. I know the main reason we're here is to teach math, biology, English and all of the other subjects, but we're also here to help our students develop the skills they need to handle conflict and make themselves better people."