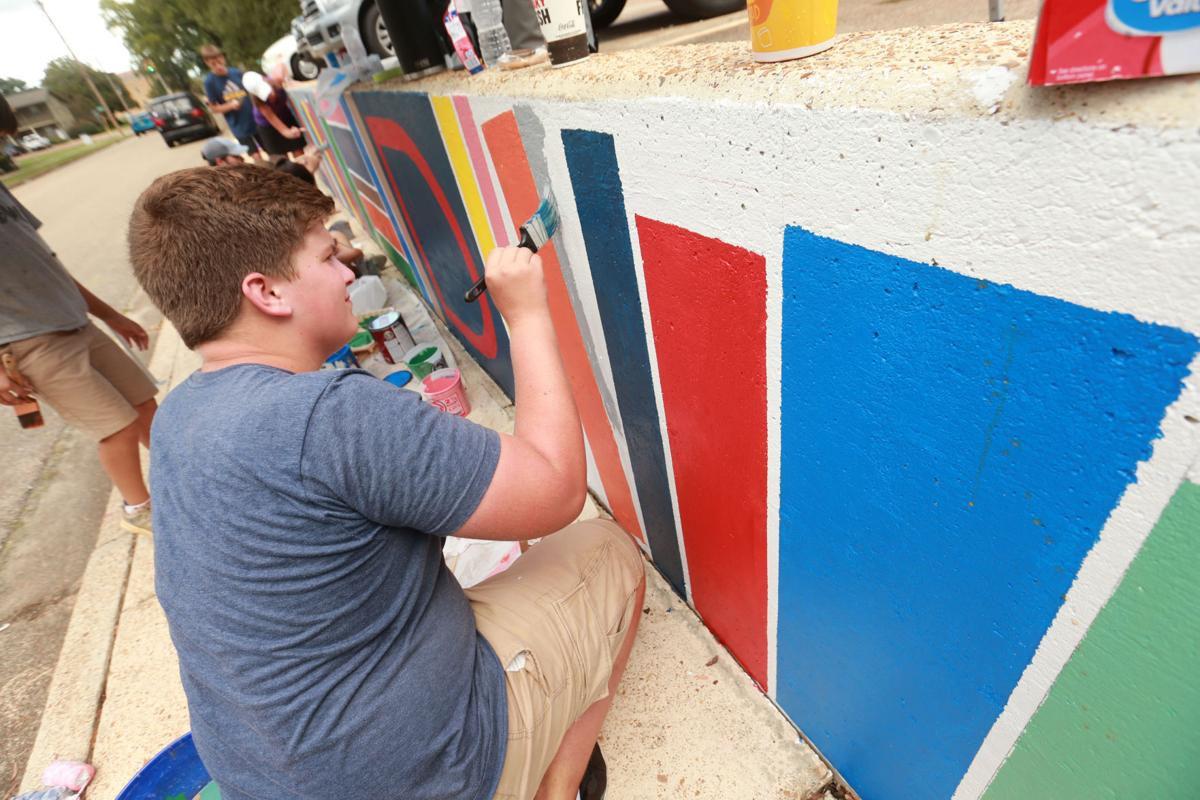 Boy Scout Joey Johnsey of Troop 12 works on a mural on the north side retaining wall at the Lee County Library, Sunday, with the help of friends and family. Johnsey painted the mural as a step toward earning the rank of Eagle Scout. 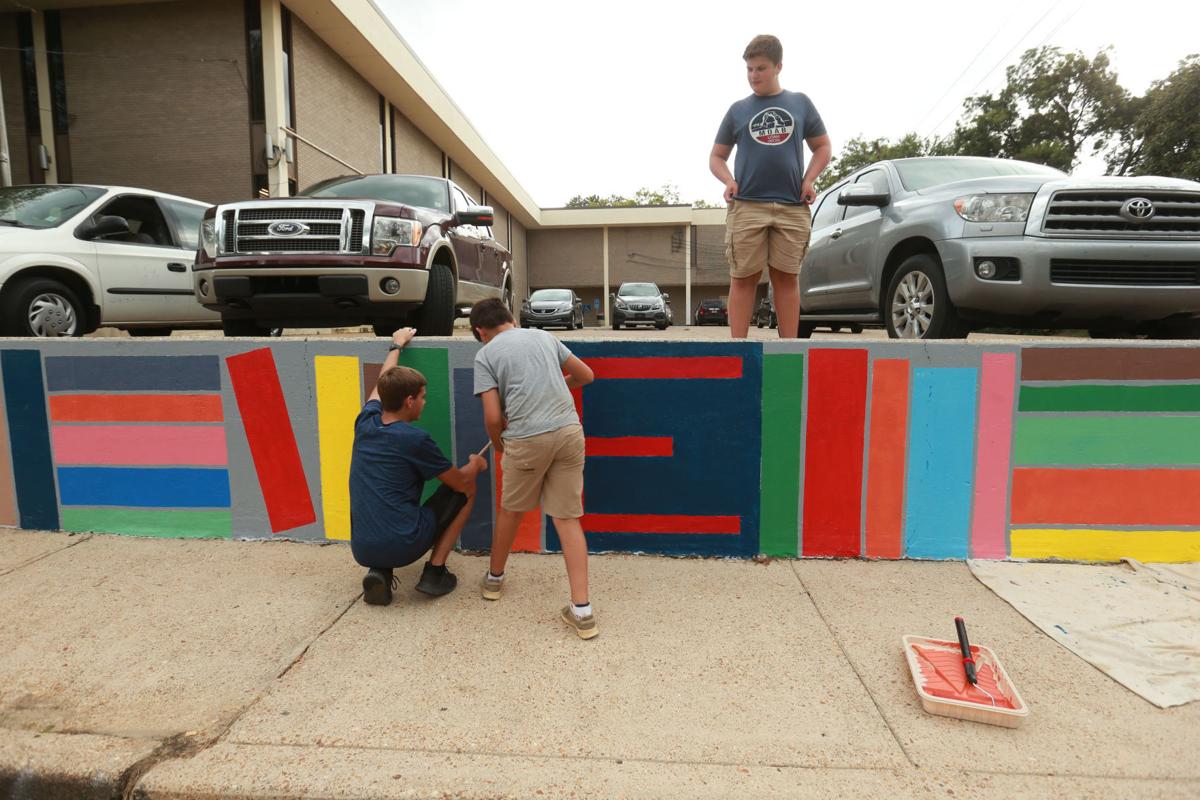 Joey Johnsey, right, checks on Sam Johnson, left, and his brother, Jack, as they help touch up a few spots of a mural Johnsey and friends helped paint at the Lee County Library. 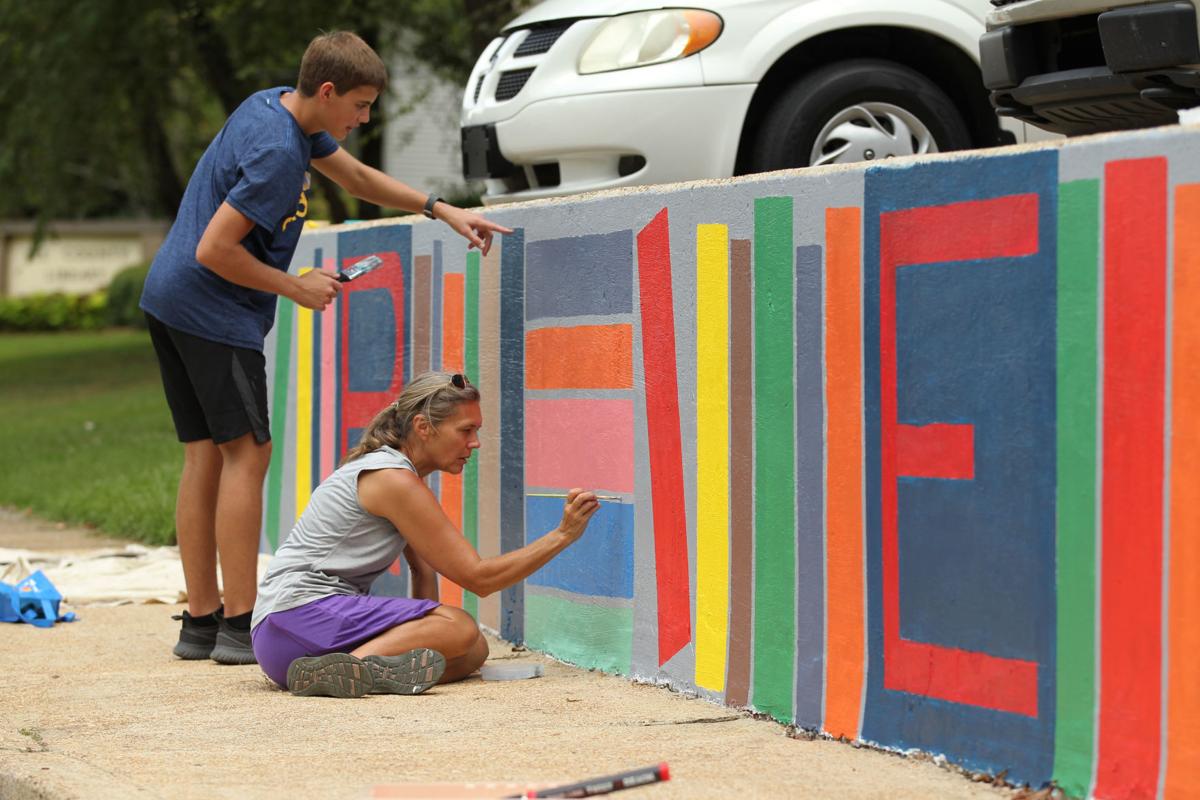 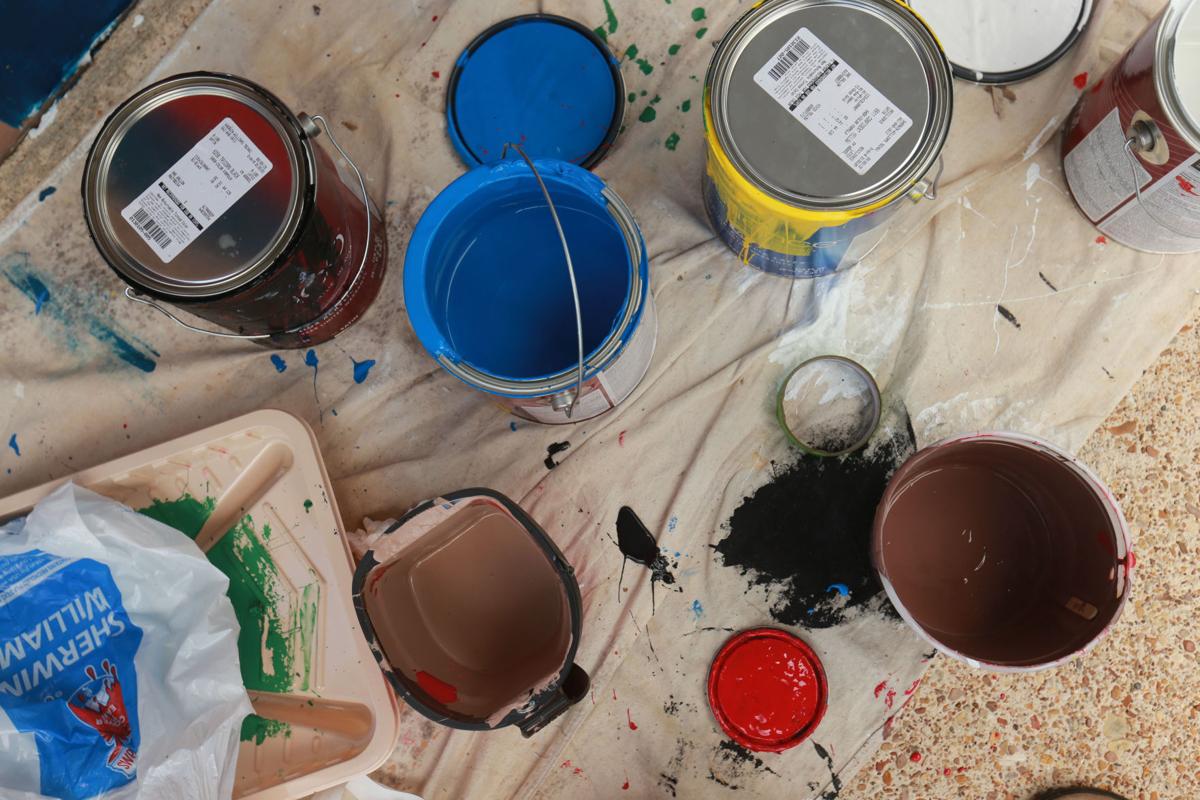 A variety of paint was used to help create a mural at the Lee County Library.

Boy Scout Joey Johnsey of Troop 12 works on a mural on the north side retaining wall at the Lee County Library, Sunday, with the help of friends and family. Johnsey painted the mural as a step toward earning the rank of Eagle Scout.

Joey Johnsey, right, checks on Sam Johnson, left, and his brother, Jack, as they help touch up a few spots of a mural Johnsey and friends helped paint at the Lee County Library.

A variety of paint was used to help create a mural at the Lee County Library.

TUPELO • When 15-year-old Joey Johnsey of Baldwyn began planning his Eagle Scout project, he started with the place he spent most of his time: the Lee County Library.

Johnsey has been a part of the Boy Scouts of America program for eight years, starting first as a Cub Scout. He’s been a member of the Scouts for six years. One step to reach the rank of Eagle Scout requires the Scout to complete a service project that gives back to the community.

The idea of a library mural began when Johnsey and his mother, Leanna Johnsey, approached Lee County Library director Jeff Tomlinson about identifying a worthy project. An avid reader, the aspiring Eagle Scout said he’s long loved the local library and wanted his community project to make it better in some small way.

“We thought it was the best way to give back to the library, because that’s kind of where I spend most of my time,” Johnsey said.

Tomlinson has long thought the retaining wall on the north side exit of the library could use beautification. The library director suggested painting a mural that features a series of books stacked on shelves, which will feature the titles of works from Mississippi authors. The mural will also spell out the word “Read.”

“The idea behind that is to draw attention to the library as a place for people to explore and to take advantage of the resources, the books inside the library,” Tomlinson said. “I think a lot of times people maybe do not recognize, even with our sign out front here, that this is in fact the library.”

Johnsey immediately took to the suggestion.

Johnsey said he began design and planning work on the mural in February, but COVID-19 delayed the start of work until Friday. Johnsey recruited a small group of his fellow Scouts to help paint the mural.

With the broad strokes of the mural complete, the plan is for Johnsey to return to the mural over the coming weeks to add details, like the titles and authors of the featured books.

Because painting a mural was a new experience for Johnsey, he also recruited local artist Charlie Buckley, who was himself an Eagle Scout and has previously completed artwork for the library, to serve as a consultant.

Since Buckley was not experienced with outdoor painting, he reached out to Tupelo High School art teacher Anna Gardner for advice. He noted the amount of work Johnsey put into organizing the project and gathering both materials and volunteers.

“It was his vision, and he had to present it to the Board of Supervisors since the library is a county-owned building, and I think it was an overall good process for him because he had to make a public presentation, and now he’s on the work, physical labor side of the project, and he had to do research on Mississippi authors,” Buckley said.

As a Tupelo artist himself, Buckley said he was thrilled with Johnsey’s project. Buckley said he appreciated the growing number of murals downtown and said painting the wall at the library would visually add to the community, hopefully draw patrons into the library

Buckely said he hopes Johnsey’s project is an inspiration to other Scouts to take on nontraditional projects to reach the rank of Eagle Scout.

“Joey’s project sort of opens the door for a new type of project for Eagle Scouts, not just your typical picnic tables or trail (cleaning) or something like that. I think it’s a neat and unique option for other kids to explore,” Buckley said.

Tomlinson said it was good to see young people who are interested in reading, learning and supporting their local library.

“I was honored to work with them and hopefully this will be something that this young man remembers the rest of his life and in turn will continue to support not only the library, but being engaged with the community and supportive of people who are trying to give back to the community,” Tomlinson said.

According to Johnsey, the project has let him demonstrate the skills he developed in the Scouting program.

“I found that leadership is a very important skill to have both in Scouting and on this mural,” Johnsey said. “When on campouts that we usually had, there’s always one person in charge and there’s someone underneath them, so it taught a lot of important leadership skills which I took with me on my Eagle Scout project, because I had to be the leader of the entire operation.”

Plus, he wants to do anything he can to bring people to the library and maybe check out a book or two while they’re there. Perhaps something from a local author.

“I really hope this mural stays around for a while so everyone can check out all the cool Mississippi authors that lived near them,” Johnsey said.