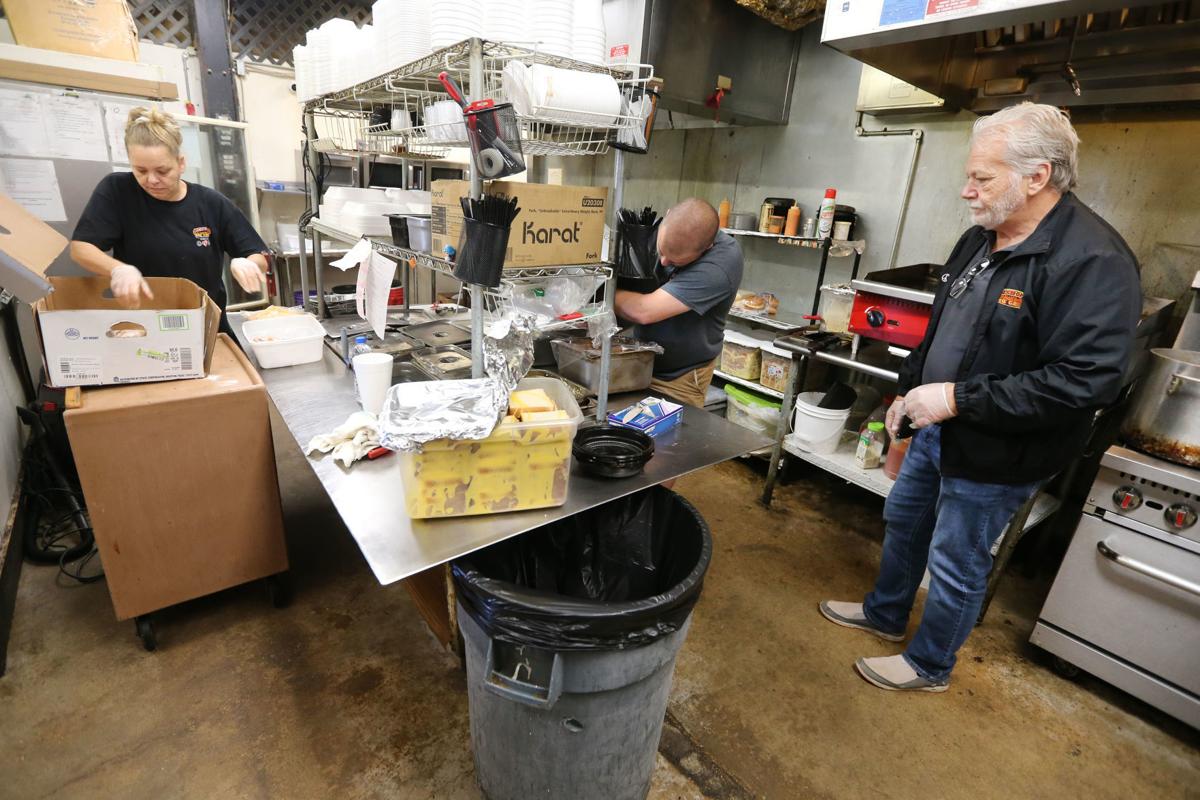 Ronnie Bishop, right, owner of Bishop’s BBQ, helps out in the kitchen at his McCullough Boulevard store in Belden with Pam Robbins, general manager, and Jeffrey Worthey, area manager, as they start getting back to business on Thursday morning. 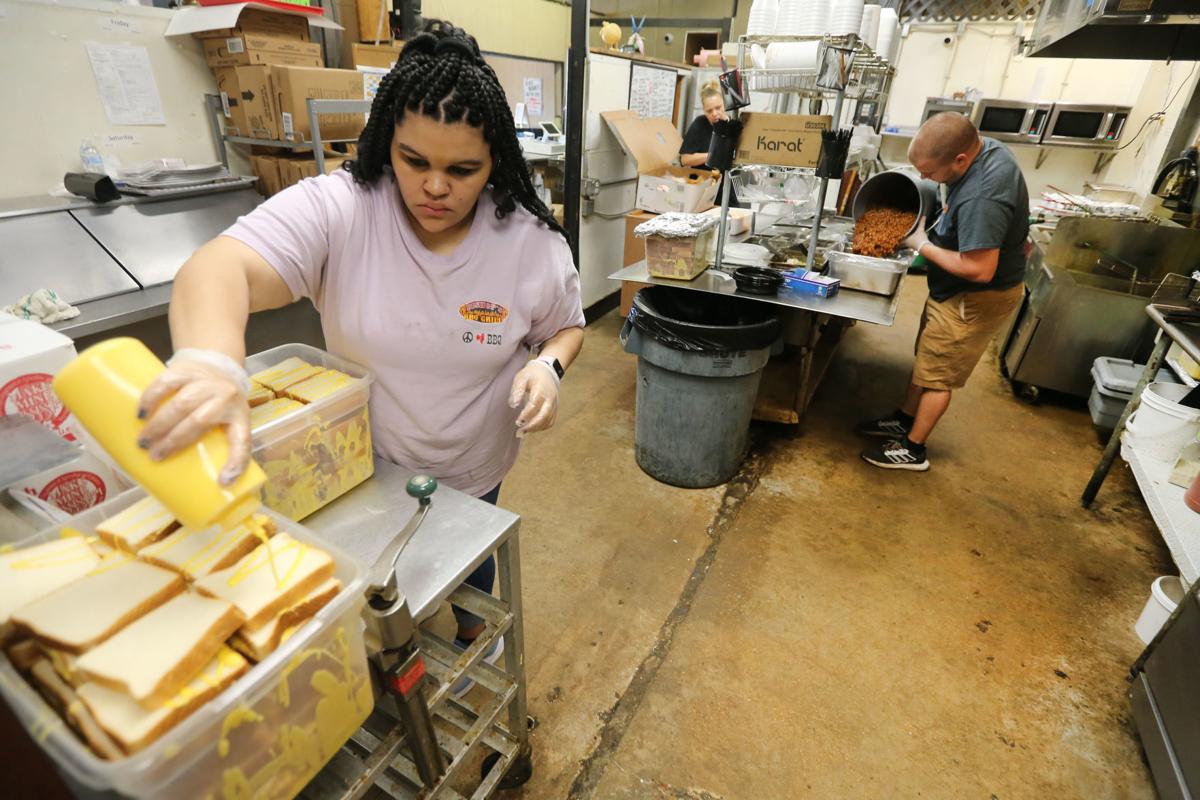 Ashley Turner, an employee at Bishop’s, prepares toast at the Belden store, which serves as the central smoking and cooking center for the rest of the locations.

Ronnie Bishop, right, owner of Bishop’s BBQ, helps out in the kitchen at his McCullough Boulevard store in Belden with Pam Robbins, general manager, and Jeffrey Worthey, area manager, as they start getting back to business on Thursday morning.

Ashley Turner, an employee at Bishop’s, prepares toast at the Belden store, which serves as the central smoking and cooking center for the rest of the locations.

TUPELO • For weeks, Ronnie Bishop hasn’t been feeling well at all.

He doesn’t have the coronavirus; what he has, however, is a full serving of stress and anxiety brought on by COVID-19.

The owner of Bishop’s BBQ Grill, with seven locations across the region, Bishop had already been under pressure as restaurants already were limited to selling only food for takeout, curbside or delivery. Having more people stay at home after shelter-in-place orders were put in place further limited much-needed cash flow.

Already, one of Bishop’s stores on West Main Street in Tupelo had been closed since a mid-February fire.

“This is the most stressful thing I’ve ever endured in my 12 years of business,” Bishop said. “Up until then, everything was going well. But I haven’t able to sleep a wink being stressed to the max, for weeks.”

After President Trump spoke on March 31 and warned about a “painful two weeks” ahead, Bishop said sales limped through the rest of the week.

“We did alright up until that Friday when the governor put his shelter-in-place order,” said area manager Jeffrey Worthey.

They decided to close Ripley first, followed by Booneville.

At the flagship location in Belden, sales had plummeted nearly 90%

The next day, a cold and wet Monday, Bishop said he “wasn’t feeling it ... I just said we aren’t opening and shut it all down.”

And for a month there was no barbecue, no catfish, no shrimp, no salads, no Gator taters.

Thousands of dollars worth of produce was on the verge of being ruined and while some of it had to be tossed, much of it went home to employees and to area food pantries. Hundreds of pounds of meat that had been smoked endured a similar fate. More than $30,000 in supplies had been delivered as well, but couldn’t be used.

Worst of all, the 76 employees of Bishop’s were out of their jobs.

But last week, Bishop slowly phased in reopening of the restaurants. All but the Bishop’s Express in Midtown Pointe and the still-closed West Main Street are back in business.

Bishop successfully got a Small Business Administration loan through the Paycheck Protection Program, which allowed him to reopen.

“That’s the only reason we’re able to do this,” he said. “I wasn’t really wanting to try at first because I didn’t want to get a loan. We’re pretty much debt-free and I didn’t want to owe anything to anybody.

“But the thing that perked me up was the word ‘forgiveness,’ and that got me a little excited about it.”

Under the PPP terms, a small business can borrow up to $10 million. If at least 75% is used to pay for labor costs, the loan can be forgiven.

That was the news that Bishop wanted. It still took a little convincing from his managers to pull the trigger on the deal, and about a week passed before the application was submitted and the loan was approved.

With a payroll averaging about $34,000 weekly before the pandemic, the PPP loan was an economic lifeline.

“We opened before I even signed,” Bishop said with a laugh. “Our plan was to open one at a time, which we’ve done.”

The first week back has been a bit slow, but it’s a start. All the locations are having to navigate call-in and curbside orders, which used to play a much smaller part of the business but has now taken a much larger role.

“We even ran out of meat last Saturday,” Worthey said.

With money in the bank to pay his employees and all the other bills, Bishop should feel a little less stressed.

“I’ve been stressed for all those weeks not sure of what would happen, but now I’m more stressed because I have this big amount of money and these certain parameters that have to be followed,” he said. “I want to be right – and I want to be forgiven.”

The PPP loan is supposed to be a crutch for a business for eight weeks. So the next two months may be the most important ever for Bishops BBQ.

“We had two choices: I had to get the money from the government or somewhere or go belly up. It was that bad,” he said. “But now we’ve put everyone back to work that we could. The problem is that some of the kids who were making $200 or $300 a week are now making $800 drawing unemployment.

“What scares me is we have eight weeks to deal with this government money. It’s great right now because we’re operating off their money, and our numbers are looking good. But if they don’t open up the gates a little and let us get back to business, then I’ll be back in the boat I was in before. If the government does what it says it will do and forgive the loan, and then open up again, then I think we’ll be fine.”

With shelter-in-place orders in effect, along with restrictions on how they can serve customers, restaurant owners are finding avenues to conn…

'Tiger King' is the weird docu-series we can't stop watching