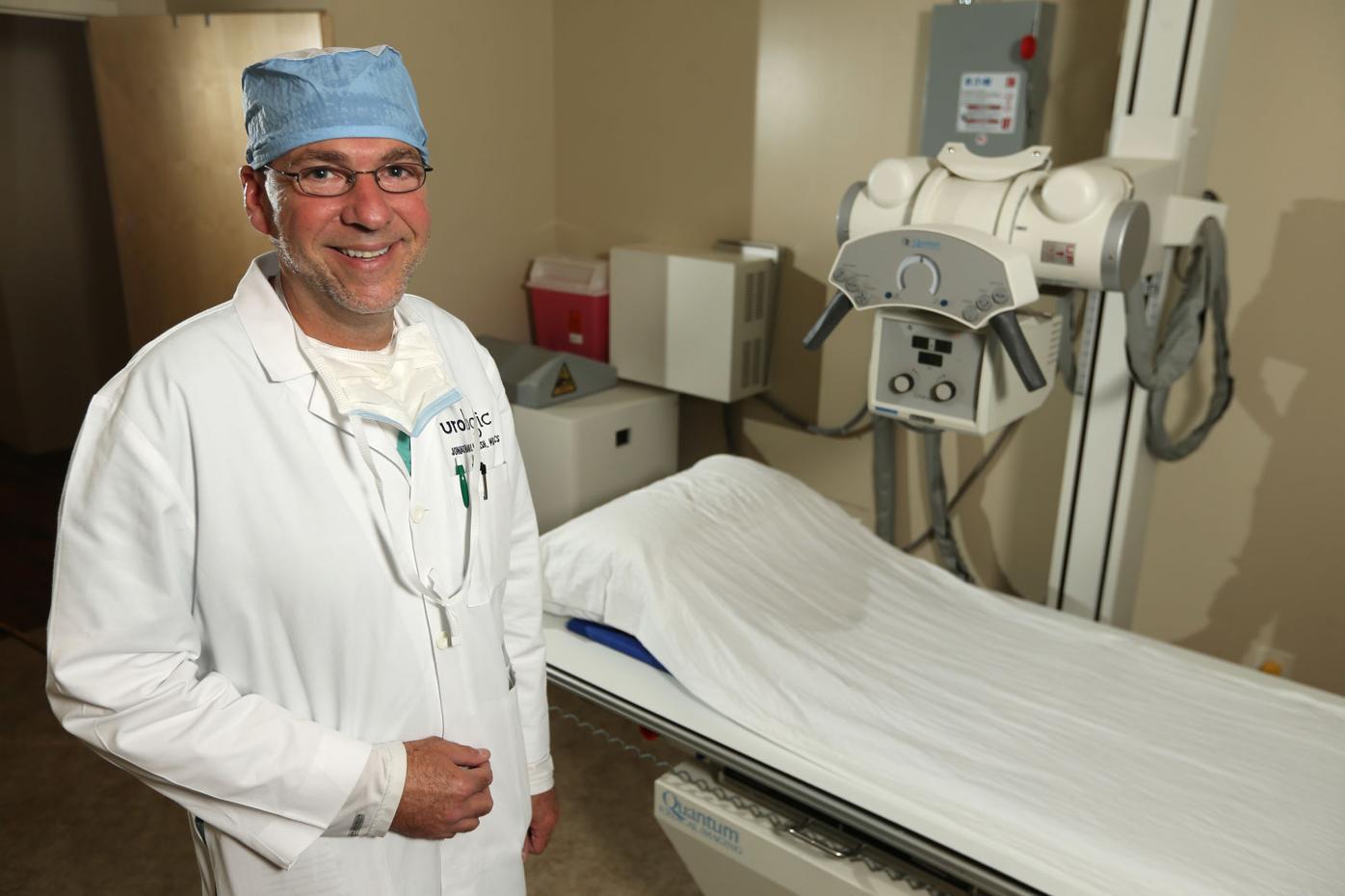 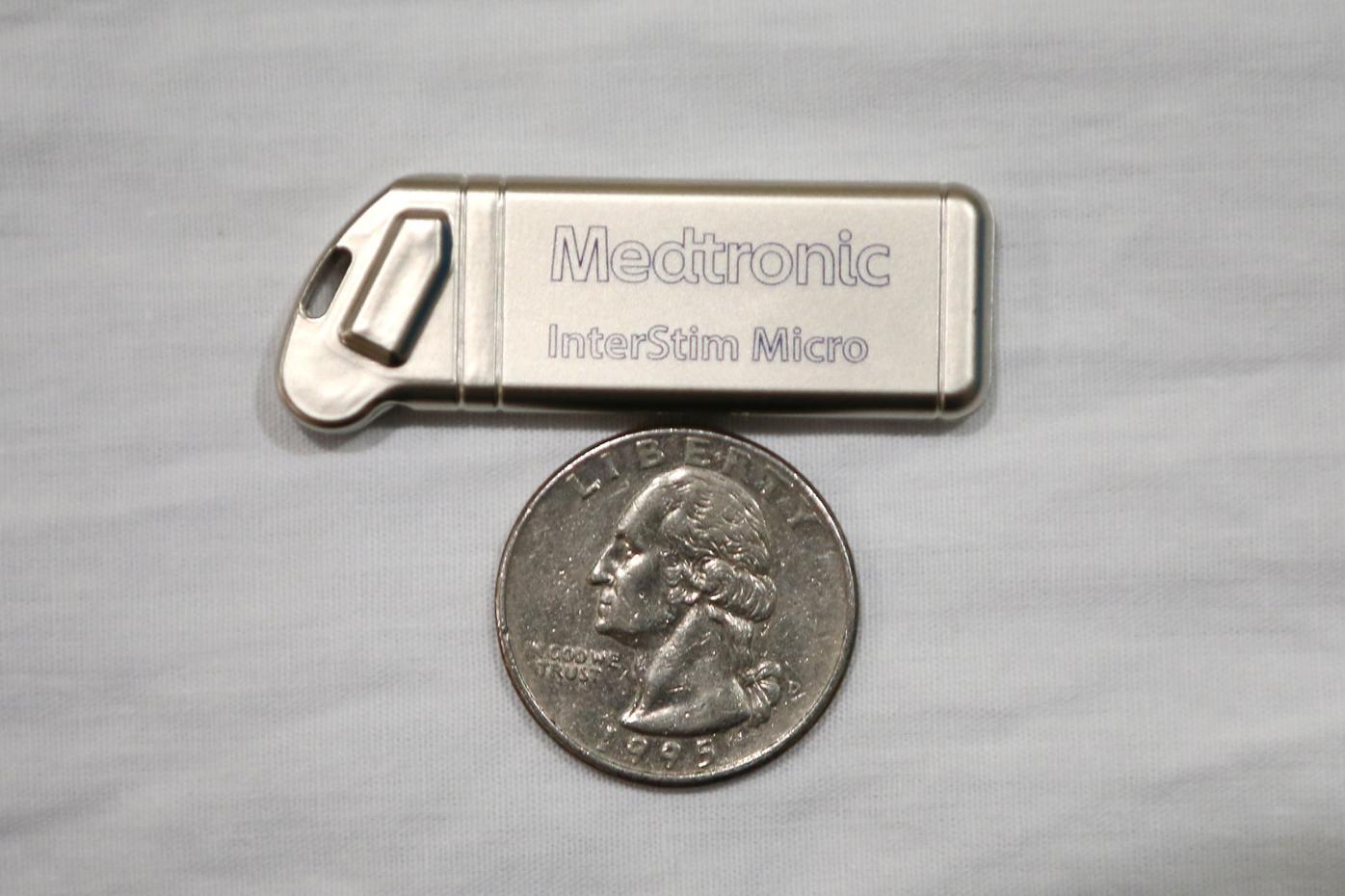 The device isn’t much larger than a quarter, yet can give relief to millions.

The device isn’t much larger than a quarter, yet can give relief to millions.

“Patients don’t realize that there are an estimated 38 million people in the United States suffering from bladder control problems, or what we call overactive bladders,” said Dr. Jonathan Kalish of Urologic in Tupelo. “The number of people with vision problems – 21 million. How many people do you see wearing glasses? The number of people with diabetes is 29 million. You always hear about diabetes and diabetics this and that.

The main reason why those two issues aren’t talked about as much is because they’re embarrassing to discuss or even think about for most people, he said. The social stigma has resulted in million of people living in seclusion or feeling intimidated and not wanting to go shopping or go to social or family gatherings.

“There’s an entire subculture of people who alter their daily routines, their entire lifestyle, because of this stigma and the concern they’ll have an accident,” Kalish said.

A quarter to a third of men and women in the U.S. suffer from urinary incontinence, according to the Urology Care Foundation.

U.S. retail sales for products targeting adult incontinence reached almost $2 billion in 2016. Last year, the market for adult diapers, disposable underwear and absorbent pads rose 9% to $9 billion. And with an aging Baby Boomer generation that is the targeted market for adult undergarments, those numbers will continue to grow.

“It’s saying, ‘hey, I’m getting full – you might want to start looking for some room,’” Kalish said. “That’s how the bladder should work, filling gradually and letting your brain know that it’s time to find a bathroom. People with overactive bladders, they know where all the bathrooms are in town, because they have to know where it is. Their bladders aren’t communicating with their minds, not getting the warnings that should be given.”

Caffeine also can be a contributor to bladder incontinence. Kalish said it causes uninhabited contractions to the bladder, which gives people the “urge” to go. And if the contraction is strong enough, the person will leak.

“We also have a chronically constipated society,” he said. “What does that have to do with the bladder? Well, your pelvis is a bone, not a rubber band, and there’s a fixed amount of real estate. So if your bowel is taking up too much space, your bladder is pushed to the side, and there’s no room to work. So you have to get your bowels to move every day.”

Kalish said he’s taken countless patients off medications simply by reducing their caffeine intake and getting them to treat their constipation and urinating on a schedule.

“You can save hundreds of dollars in medications by just following the fundamentals,” he said. “These simple measures can go a long way.”

Medications can also help with incontinence, but they can cause side effects and can be expensive. BOTOX also can be used to help relax the bladder muscle, but it wears off in four to six months. Repeat treatments are necessary then, and are expensive.

So what if there was another alternative that leads to better control and less need for adult disposable underwear and pads or medicines?

There is – it’s just that not enough patients know about it.

“A lot of people fail their meds, and they’re done, and they’ll spend hundreds of dollars on adult diapers,” Kalish said. “But there’s so much more you can do.”

A preferred alternative is synchro neural modulation, and it comes down to a small device, which is implanted near the buttock.

“It’s been around for 20 years, and we’ve been implanting these devices since about 2006,” Kalish said. “Basically what it does help manage that concept of, ‘I feel like my bladder has a mind of its own.’ It helps your brain and bladder communicate with each other.”

The device, about the size of a large paper clip, serves much like a pacemaker. It gently stimulates the nerves of the bladder so that the line of communication to the brain is clear. The device also is rechargeable, lasts 15 years or more, and is MRI-compatible.

A recent success story is a patient who was urinating 35 times a day; a test phase reduced that to 12 times a day, and the device was implanted last week to further reduce his bathroom visits.

“It will change your life,” Kalish said. “What’s really incredible is that it’s nearly 90% successful with people with fecal incontinence ... there are very few surgeries we can say you’ll have a 90% success rate. It’s really amazing.

“But you know how often we implant these for people? Rarely, because they don’t know about it. But without a doubt it’s the best treatment for people who have fecal incontinence. But we rarely see them.”

Cost isn’t a big obstacle; patients with Medicare and supplements get it free. And other major insurance companies cover the surgery, minus a deductible.

“We just haven’t educated the public enough about it,” Kalish said. “People with incontinence: You don’t have to live like that.”