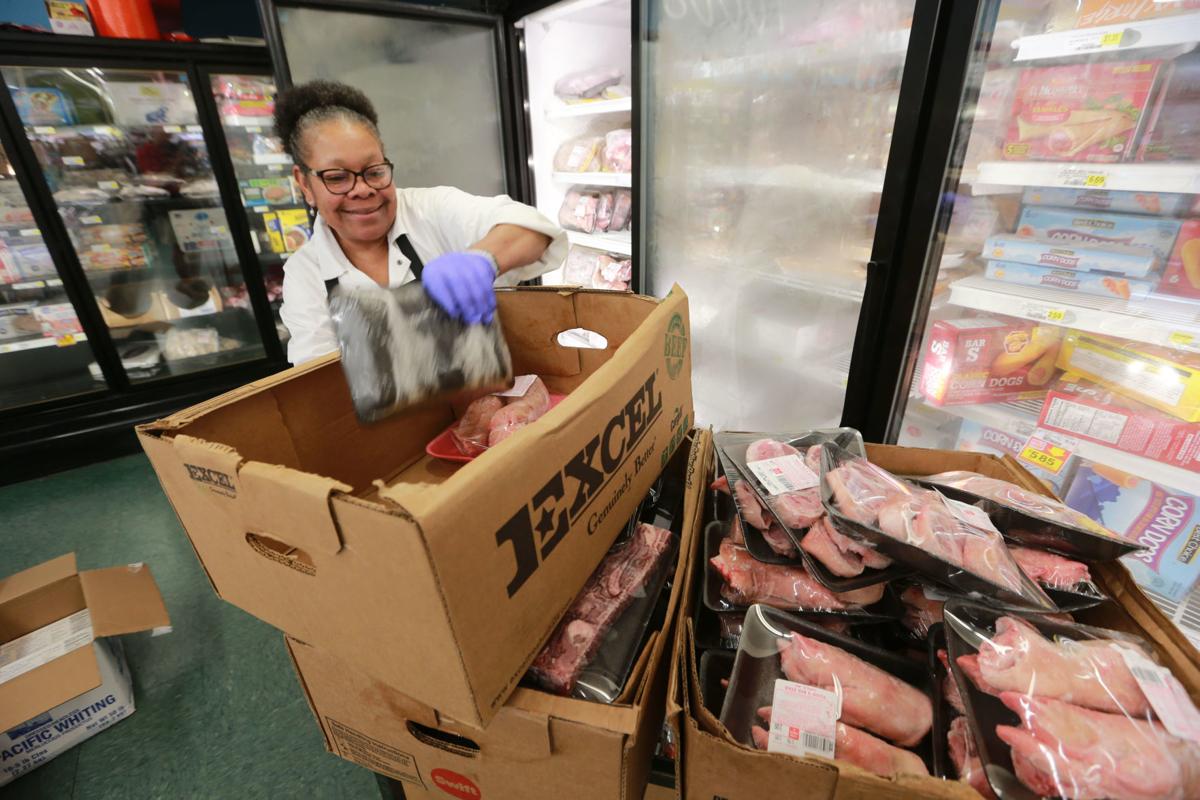 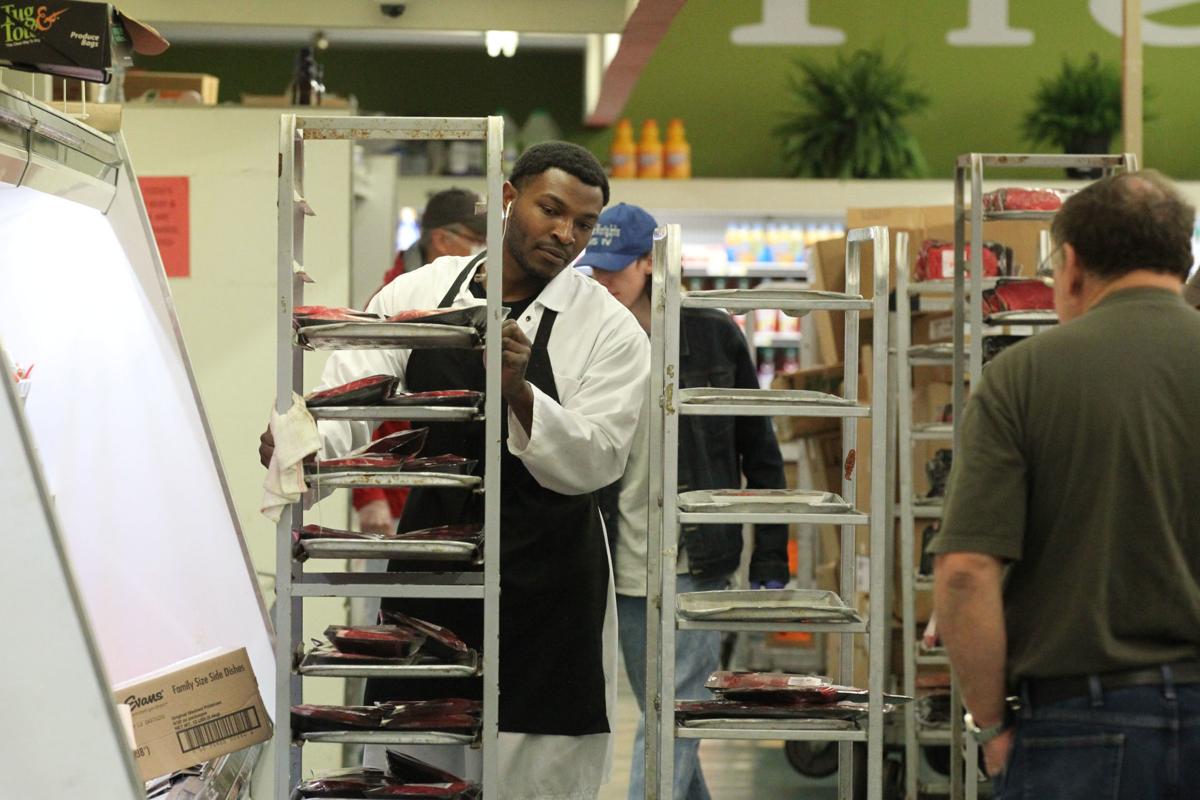 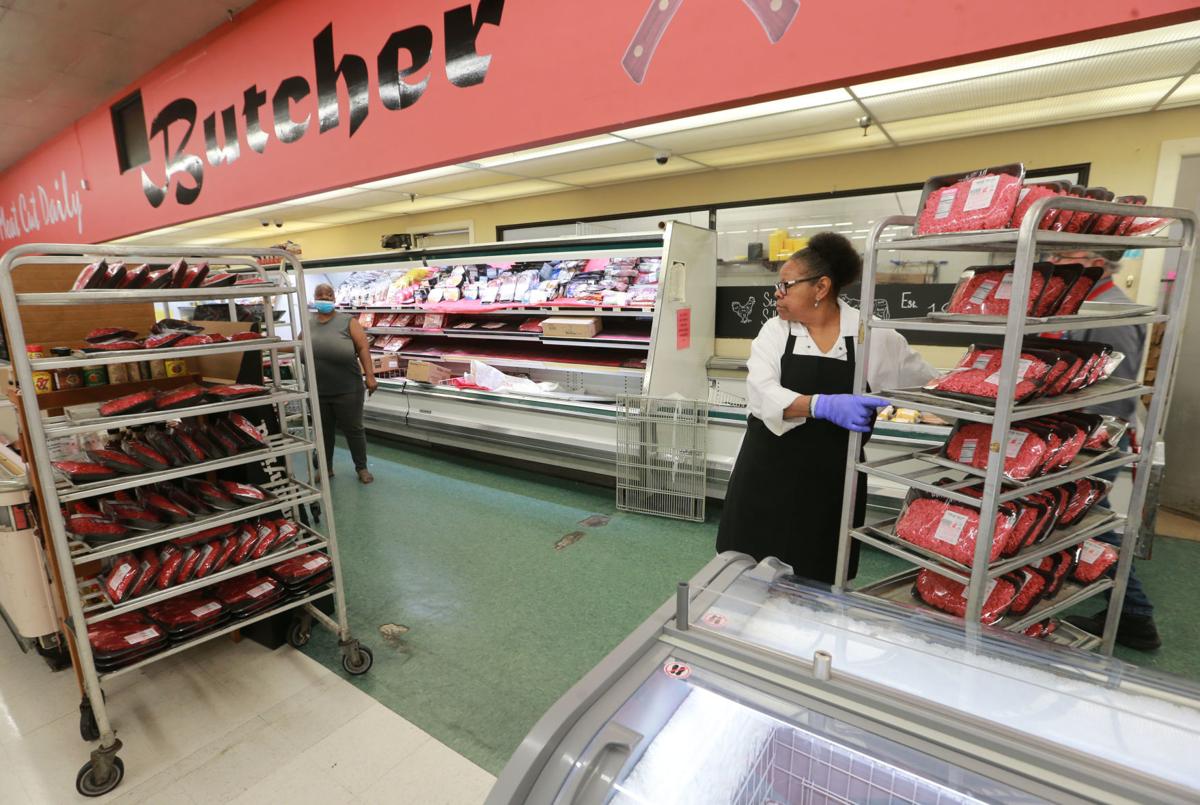 Deirice Lambert wheels out another tray full of fresh meat as she and others employees begin restocking the shelves at Todd’s Big Star Tuesday morning in Tupelo. 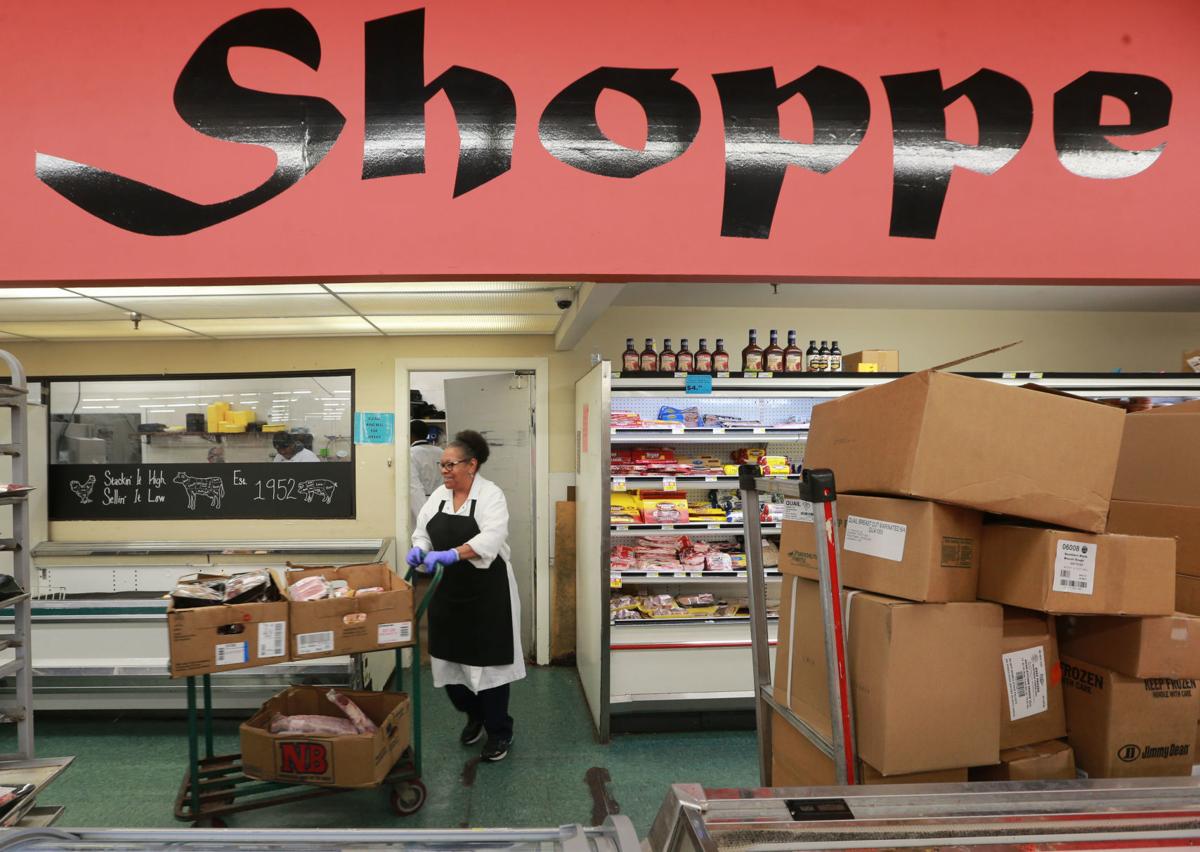 Deirice Lambert wheels out another tray full of fresh meat as she and others begin restocking the shelves at Todd's Big Star Tuesday morning in Tupelo. 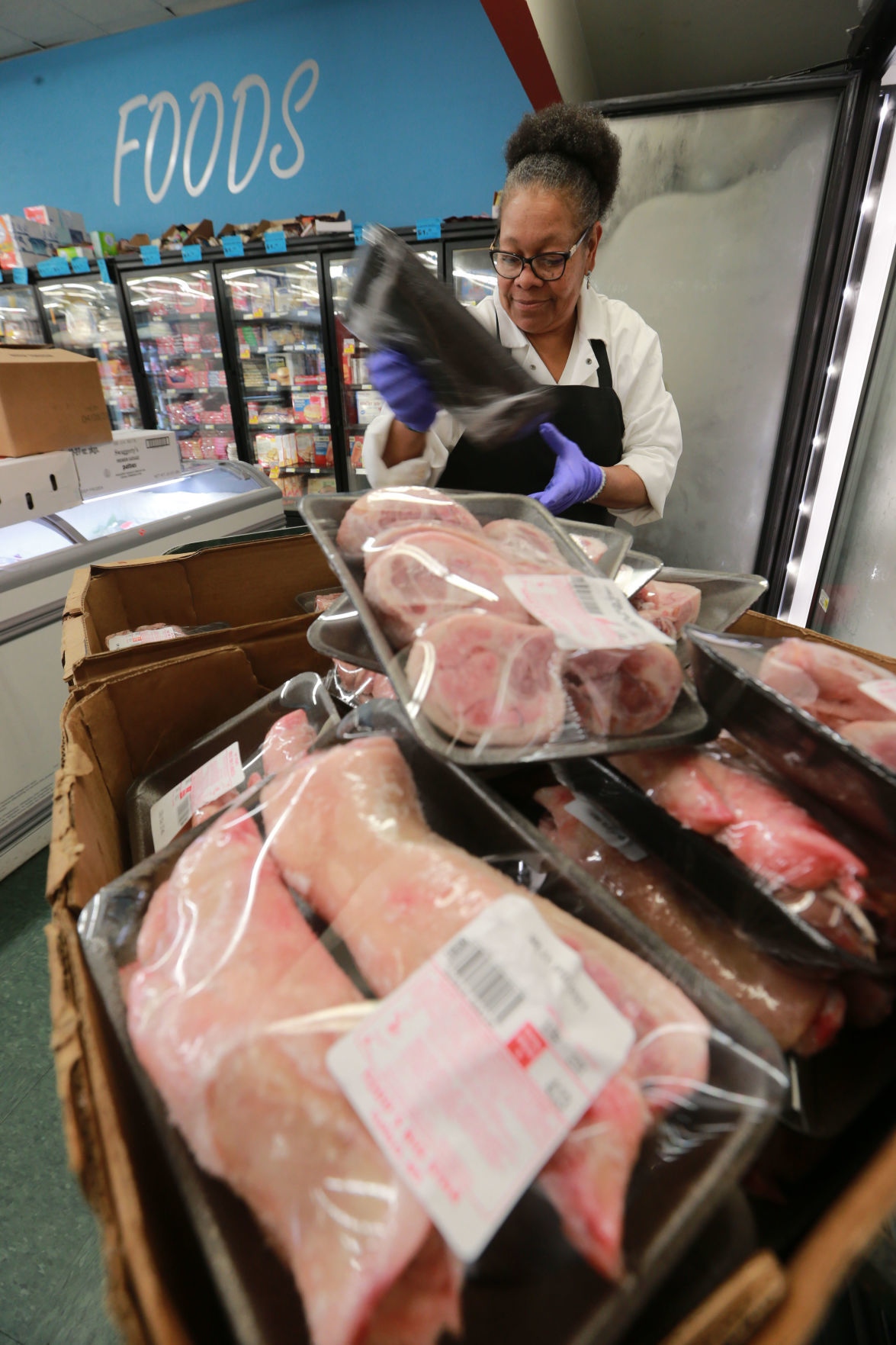 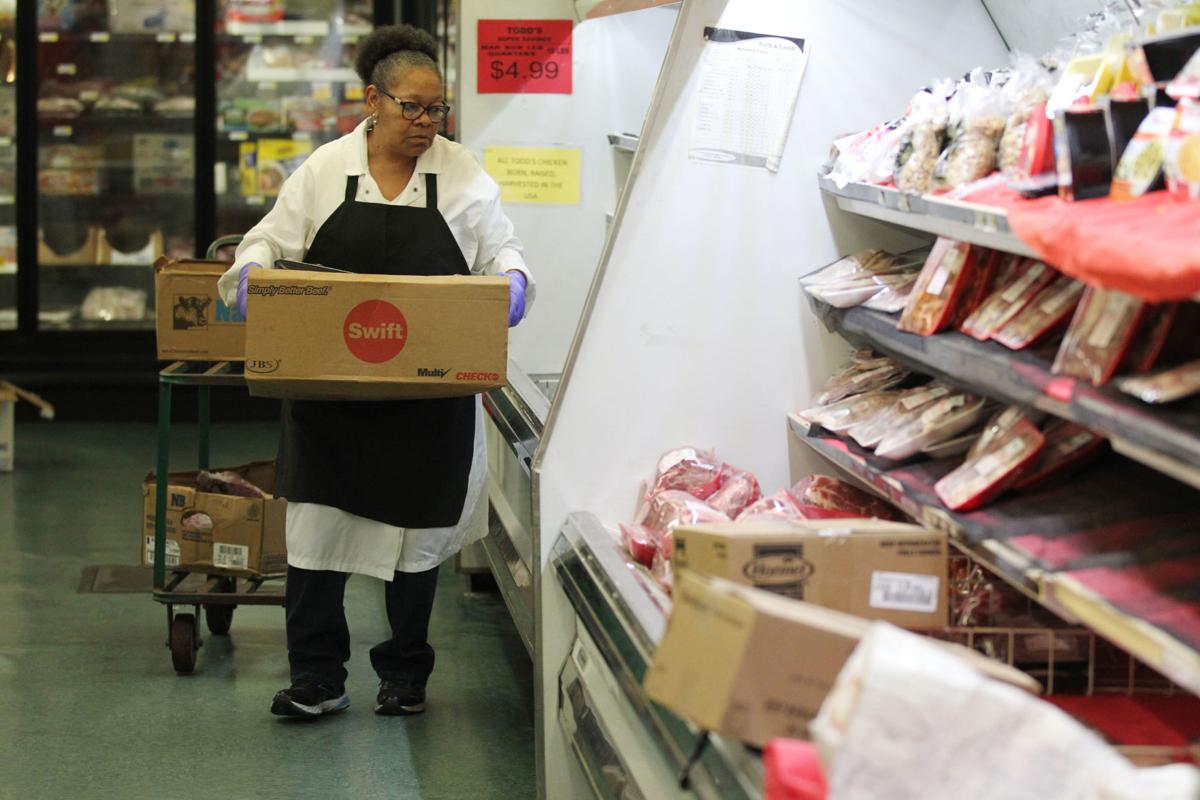 Deirice Lambert wheels out another tray full of fresh meat as she and others employees begin restocking the shelves at Todd’s Big Star Tuesday morning in Tupelo.

Deirice Lambert wheels out another tray full of fresh meat as she and others begin restocking the shelves at Todd's Big Star Tuesday morning in Tupelo.

TUPELO • At Todd’s Big Star in Tupelo, the meat department has always been the centerpiece of the store. But the past few weeks have put extra stress on the meat cutters and workers there as demand has soared and supply has tightened.

“I’m calling every broker I know, including everybody local and even down in Jackson, trying to find meat,” said owner Clay Knight. “Some have it, some don’t. Some say they’ll be getting it but at this price. But I don’t want it at that price. And the prices keep going up.”

The beef and pork supply is down 40% as of Monday, as several meat processing plants nationwide have had to shut down over the coronavirus. Wendy’s restaurants has had to stop offering hamburgers at about 20% of its locations because of the beef shortage.

“Chicken isn’t a problem; there’s plenty of that now,” Knight said. “Beef is the toughest to get.”

Early on, as restaurants closed, the supply of beef was good, and much of it was repurposed and sold to grocery stores. But now that supply has been depleted, along with stocks of frozen beef that entered the supply chain.

“They were dropping prices at the beginning, but now that’s gone and it’s difficult to get fresh meat,” said Clay Coleman, owner of Clay’s House of Pig in Tupelo.

Coleman was buying about a dozen cases of pork butts a week before the pandemic shutdown, but his business hasn’t let up. Now, he’s buying about 18 cases a week.

And he got word Wednesday that his price for butt has gone up from 99 cents a pound to $1.33 a pound this week.

“It’s about to get worse,” Coleman said.

But it’s at the grocery store where most consumers are feeling the impact of higher prices. Stores are limiting quantities that customers can buy, as well.

At the Cash Saver store on South Gloster Street in Tupelo, customers are limited to two packages each of ground beef, steak and pork. The limitations are the same at Kroger, which also added chicken to its list.

For Sam Ferrris, who opened Sam’s Town Market in Mantachie earlier this year, it’s been a mixed bag.

“We were told initially by our warehouses that despite the reports of the national media, they were not experiencing issues on their end and therefore our supply should remain consistent; this was even after the full page New York Times ad that Tyson released, so at that point we felt good,” Ferris said.

But the past few days have changed that.

Panic-buying, which led to hoarding of meat and toilet paper in the early weeks of the pandemic, has returned as news of meat processing plants shut down.

Other states are starting to relax their restrictions and businesses are ordering to refill their stock. That’s put additional pressure on the warehouses to fill their orders.

“Most of this is the warehouses’ own doing, because when restaurants, schools, and other facilities closed, these warehouses were forced to offload larger amount of their inventory to businesses such as grocery stores that were allowed to stay open,” Ferris said. “This was needed to fight the panic, but with previously closed establishments reopening, there are more mouths to feed and the only step distributors see as fair and feasible is to cut back grocers to the point at which they started while gradually returning restaurants to their normal levels.”

Ferris said he’s been told the supply network should return to normal within a few days.

Meanwhile, Knight is having to change prices every other day as his costs fluctuate. And what price he gets over the phone is often different on the invoice when it arrives. And sometimes the supplier will offer a substitute.

“Or they might not fill the order completely,” Knight said. “Over the weekend we ordered 20 cases of ribeyes – we got five.”

Ground beef has been the most difficult to get, and when it is found, the prices are climbing. In March, Todd’s was able to get ground beef from its suppliers for $1.50 a pound; last week, that price had jumped to $2.66 a pound.

“We’re going to find meat,” Clay said. “We may have to find organic growers, and they’re dropping their prices but the price might not be as low as people are used to.”

The consensus is that the beef and pork will continue to be tough to get and prices will rise. But eventually, as processing plants get back online, the supply will improve.

When is the question.

“We’re grateful for the work of the warehouse laborers and truck drivers during this time, but if there’s anything to take from this diatribe, it’s that panic and the willingness to be emotionally influenced by every news blurb has created a bulk, if not all, of the issues,” Ferris said. “From the very beginning we were told that if customers purchased groceries at regular amounts and not in panicked or hoarding manner, then there would never be any concern throughout the supply chain – quite obviously that didn’t happen.”

Meanwhile, alternative protein sources, such as plant-based Beyond Meat, have seen a spike in demand. Nielsen says sales of fresh meat alternatives were up 224% the week ending April 25. It noted fresh meat sales jumped 50% in the same period.

For some, only animal protein will do.

“If I want a steak, it’s going to come from a cow, not from flowers and soybeans or whatever,” said Jake Wilson with a laugh. “I’m willing to pay more.”

Emirates restarts flights but the flying experience won't be the same