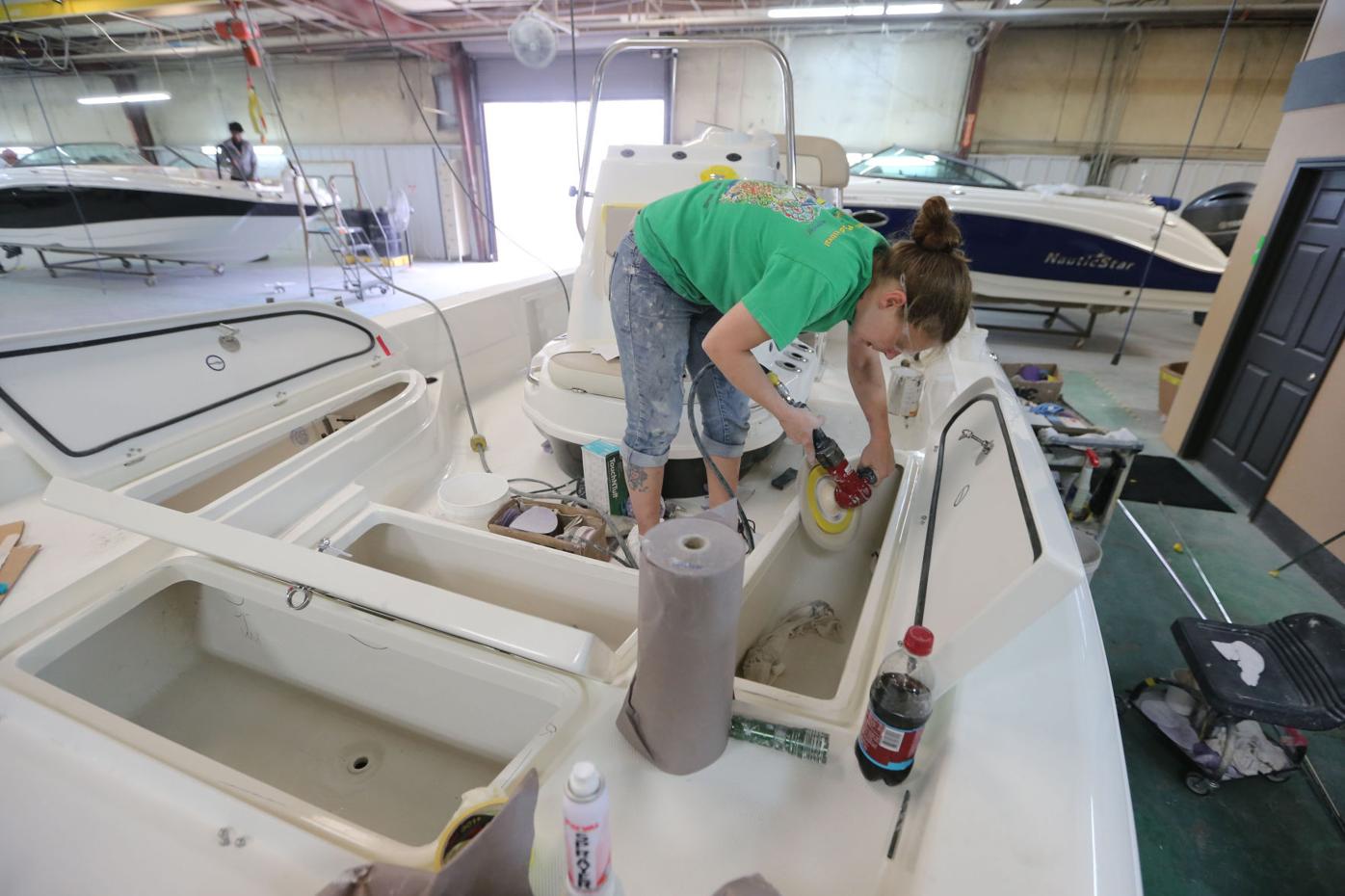 Cindy Wilson buffs out a storage bin as boats are completed at NauticStar Boats in Amory. 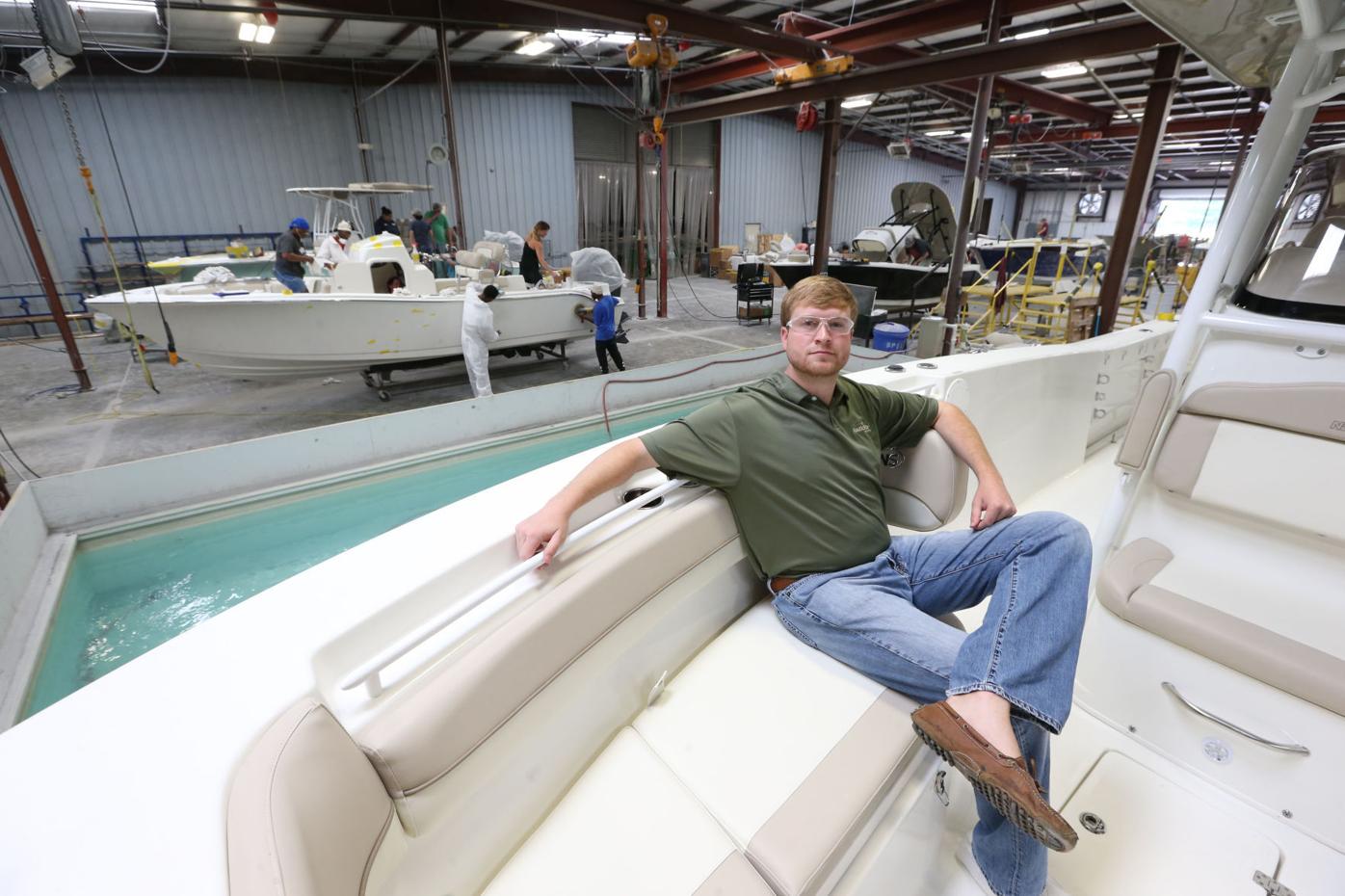 Cindy Wilson buffs out a storage bin as boats are completed at NauticStar Boats in Amory.

AMORY – Fifteen years ago, Phil Faulkner decided to switch to the other side of the boat business.

Faulkner was a retailer, selling a variety of brands, but decided he wanted to build his own boats to sell. He had the knowledge and experience and went to work.

Now the company is the fourth-largest company by marketshare in the industry, the 18-to-28-foot fiberglass, outboard motor segment.

“We make about 2,100 boats total in a year,” said Phillip Faulkner, one of Phil’s sons, who is the company’s vice president of sales and marketing.

Another son, Brian, oversees the production side of the business.

“My brother and I are very involved, and we enjoy the family aspect, spending time together to watch the company grow and thrive,” said Phillip. Brian oversees all phases of production, from inspecting the quality of the boats to ensuring the finished products are properly wrapped and ready to be shipped.”

Phil, the family patriarch and company founder, is CEO, but Phillip says that doesn’t make his job harder. In fact, he likes that his dad is around for advice and guidance.

“The work environment is little bit better, I think,” he said. “You’re working with someone you’re comfortable with, and I think you make decisions better as a family. It also gives you more flexibility and ease in making those big decisions.”

NauticStar was among the survivors of the Great Recession from 2007-2009, thanks to some key decisions made by the Faulkners.

Phillip admits the economic downturn was tough, however.

“It was a good reality check for us,” he said. “It was quite process, but we also saw a lot of opportunity.”

Disposable income was anything but during the recession, with consumers struggling with bills and high gas prices. The money that used to be spent on luxury items and other toys all but tried.

“It’s not like we’re manufacturing a commodity,” Phillip said. “Boats weren’t necessarily what people had to have; they’re more on toy side. We were dealing with a less-than-desirable climate. And among the first things to go is the boating industry, along with the RV industry.

“It was tough, but we made it through. Dad made us though. I always say about that time that it was when you separated the boys from the men. A lot of companies didn’t make it.”

Among the casualties was Triton Boats in Aberdeen. While the aluminum-made boats weren’t in direct competition with NauticStar, the company – a division of Brunswick – consolidated operations, putting more than 150 people out of work.

The recreational boating industry as a whole is in much better shape these days, according to several industry publications. Data from Statistical Surveys Inc. showed that through September 2016, year-over-year sales hovered around 5 to 6 percent growth. At the same time in 2015, sales were up around 6.8 percent.

Ryan Kloppe, director of sales at SSI, said he expected sales wiould eventually fall within the range of the company’s prediction of 4 to 6 percent growth in 2016. While the figure is lower than the growth experience in the previous two years, it is “still a considerable improvement from 1.5 percent growth three years ago.”

“Certainly we’ve seen a lot of interest in the offshore boats, particularly in the last year and a half,” he said.

Through a network of many dealers, NauticStar’s primary market is east of the Mississippi River, as well as Texas, Louisiana, Arkansas and parts of the Midwest and Great Lakes.

Texas is one of the company’s biggest markets, and NauticStar is making significant headway farther up the East Coast, as well.

The company has been through a roller-coaster, but Phillip Faulkner said NauticStar is as strong as ever.

“Technology changes, boat designs change, but the processes haven’t changed other than we have had to learn more,” he said. “Production and demand have increased, with more options that are available and that people want. We had to become more efficient ... we brought in a couple of experts/consultants to teach us a little more about being lean manfuacturing and how to keep that in place. And I think we’ve been very successful.”

The Faulkner’s credit their workers who have helped the company grow.

“And it’s about bringing a value-added product,” Phillip said. “For what we offer, the level of value we bring to the consumer base is really unrivaled. And that mean more jobs, more production for Amor and Northeast Mississippi.”

Burnett: Barr is leaving Trump on island of his most die hard sycophants