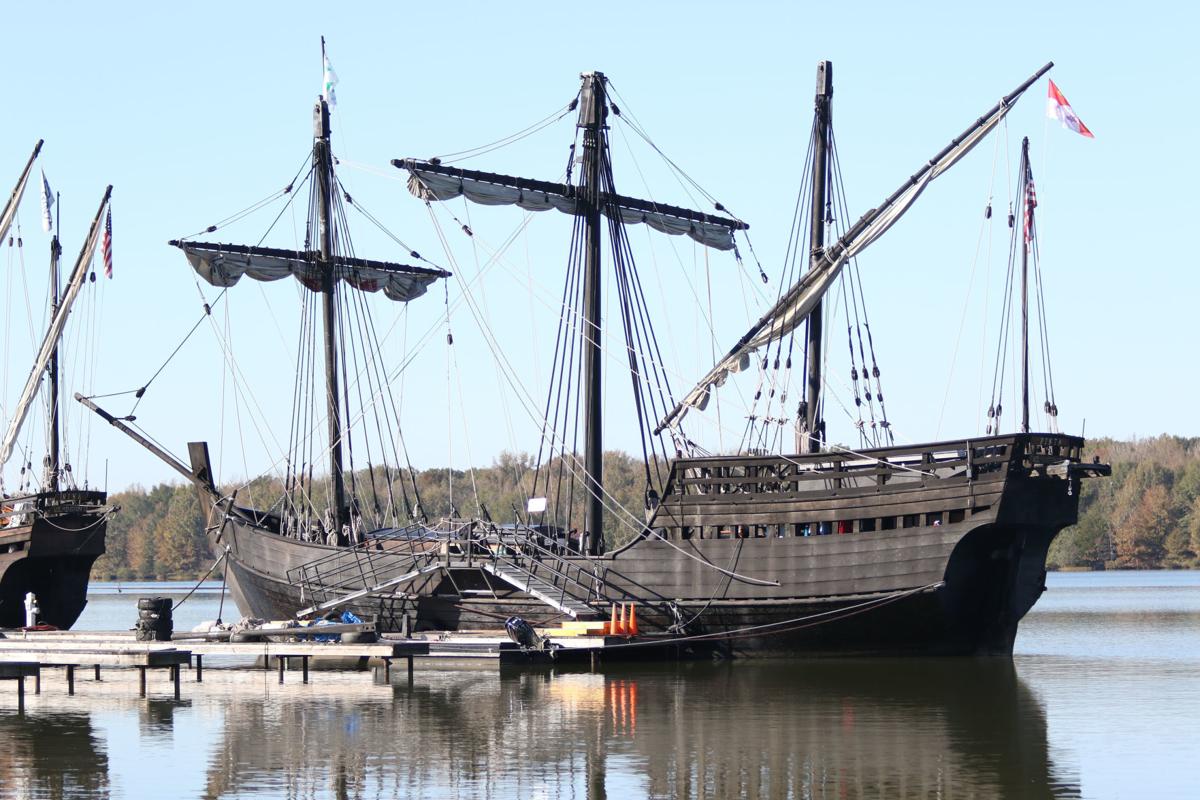 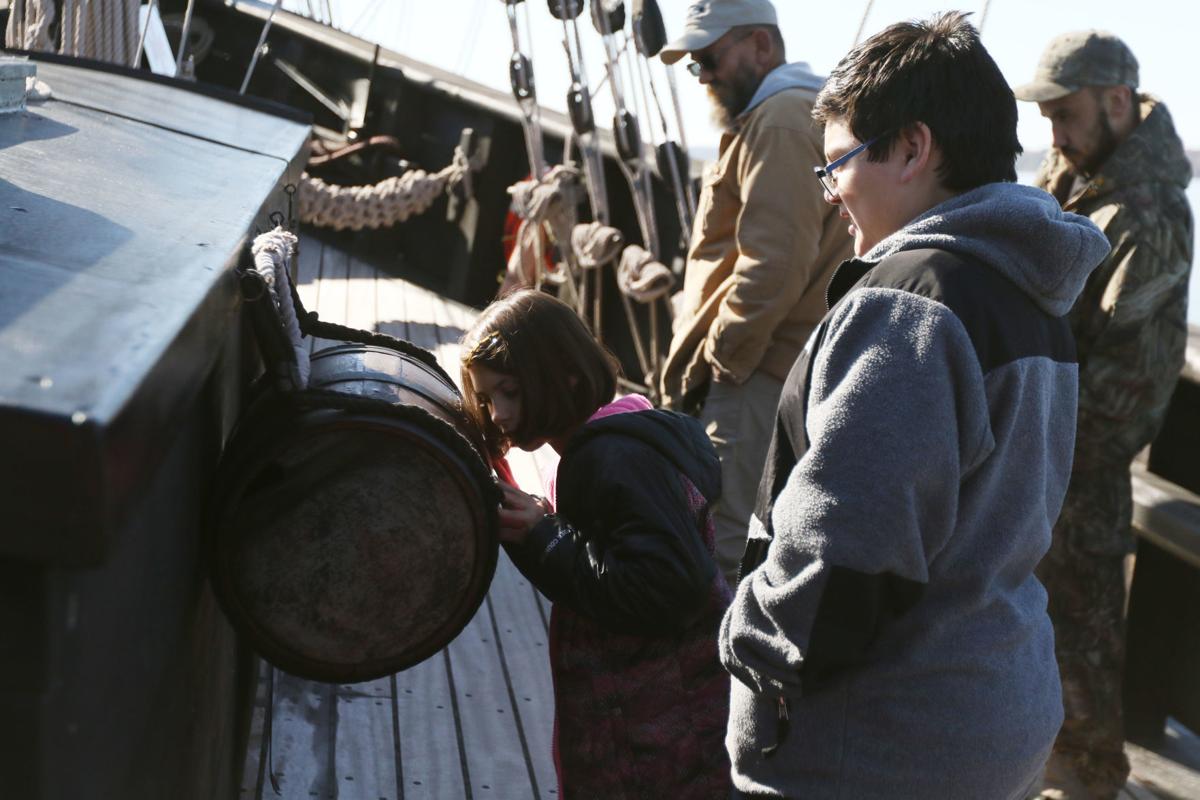 Macy Gordon, 7, and her brother Chandler, 11, explore the replica of the Pinta Saturday in Fulton 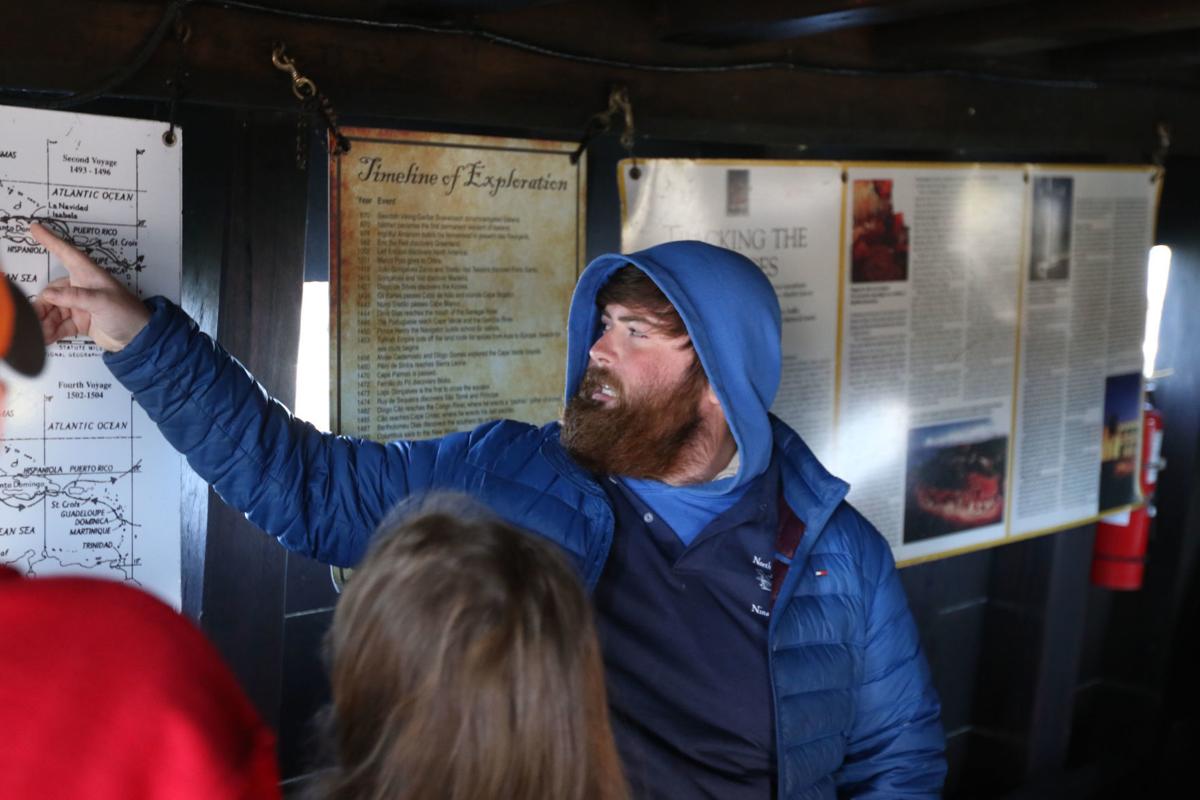 Tour Guide, Zack Orie, explains the history of the Nina and the Pinta Saturday in Fulton 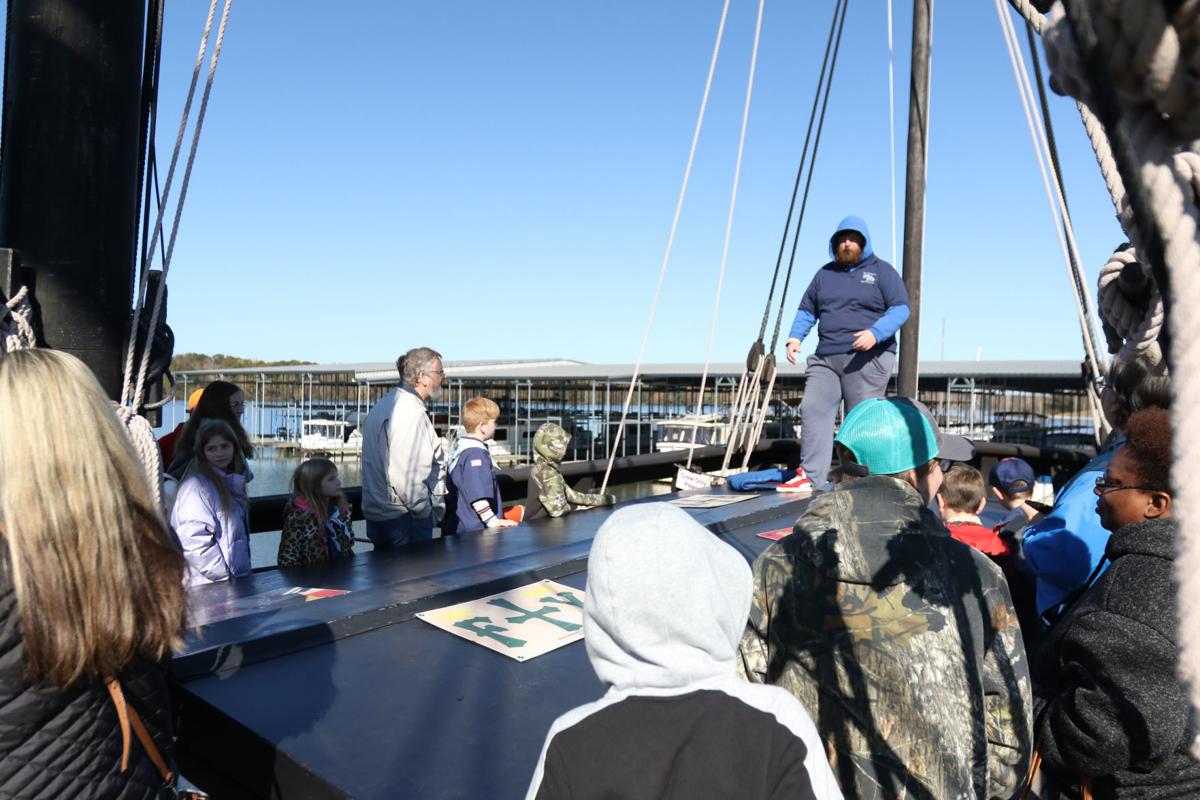 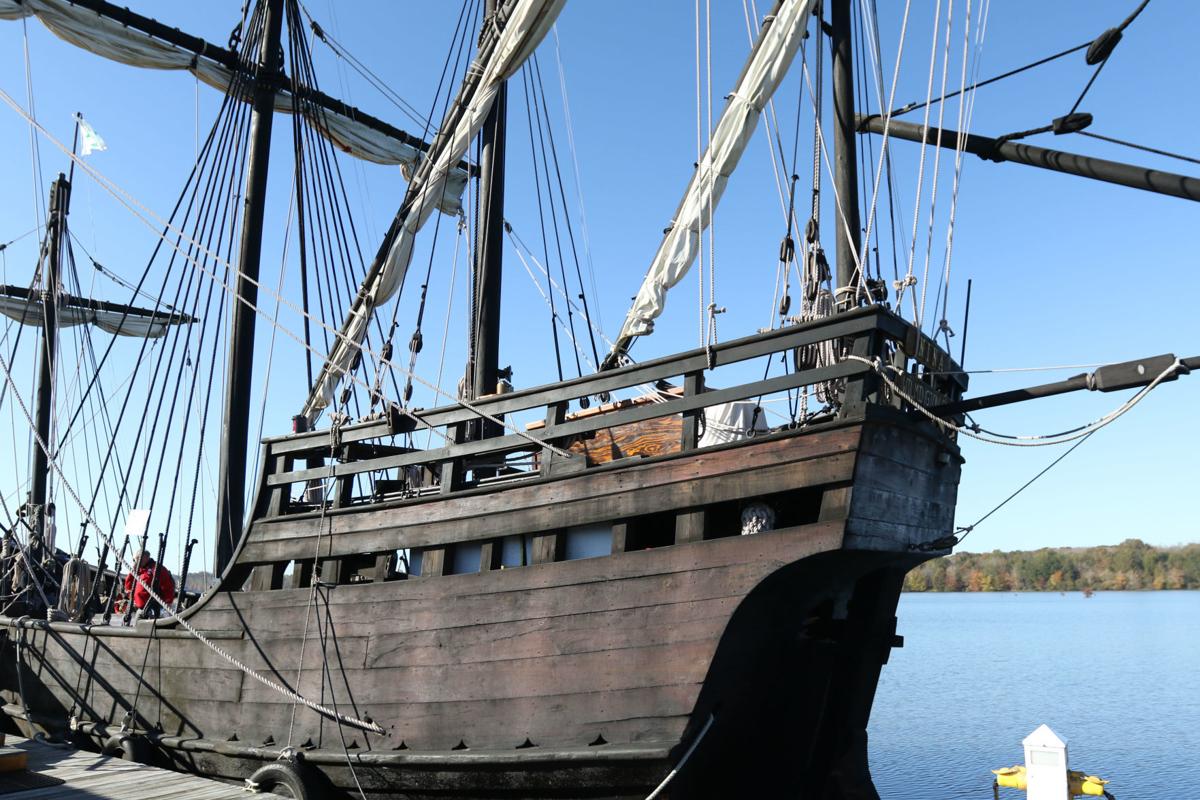 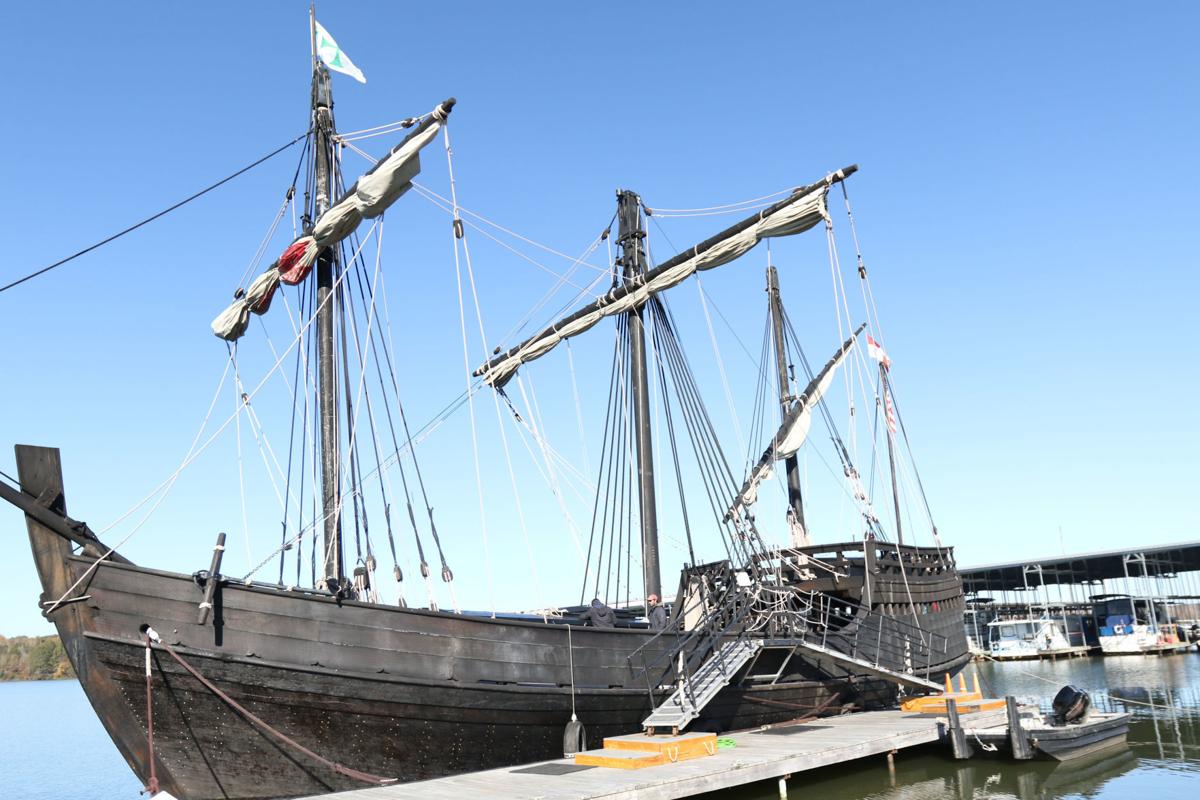 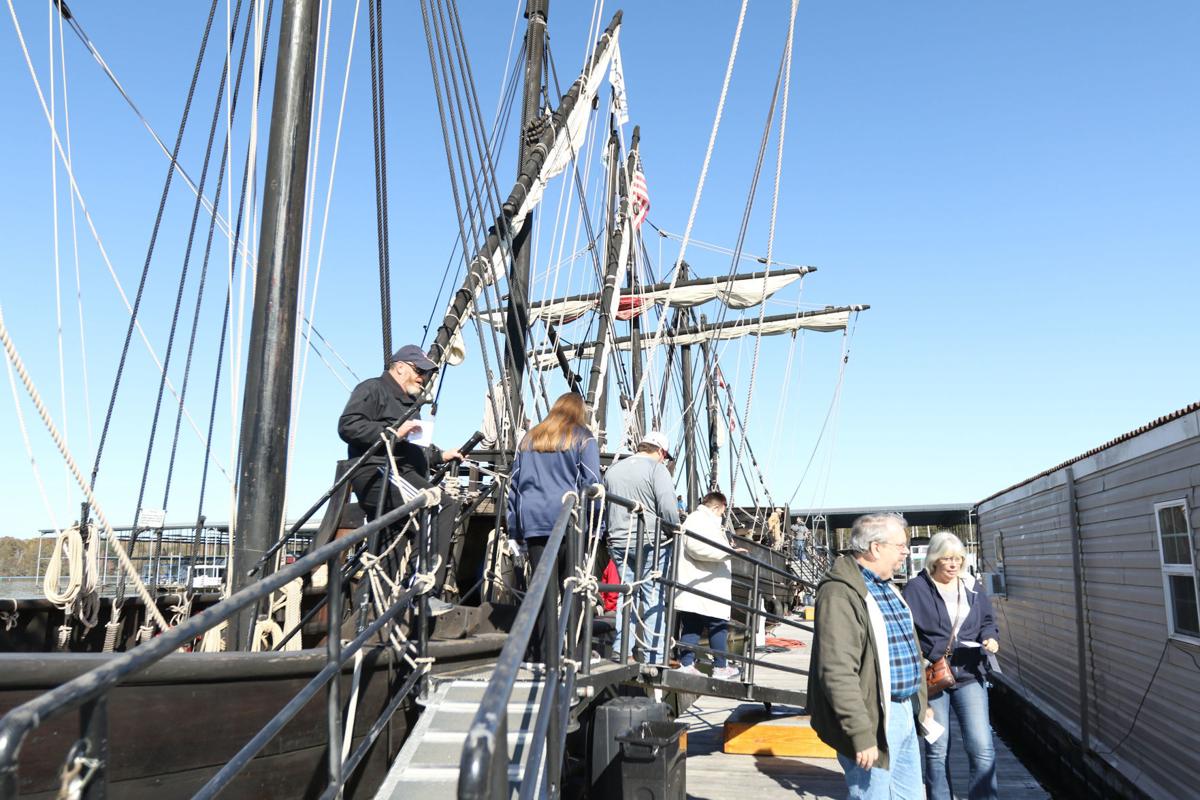 Macy Gordon, 7, and her brother Chandler, 11, explore the replica of the Pinta Saturday in Fulton

Tour Guide, Zack Orie, explains the history of the Nina and the Pinta Saturday in Fulton

Columbus • Crew members of the Niña and Pinta, replica ships of Christopher Columbus’s expedition, docked in Fulton at Midway Marina last week, and on Saturday, dozens of tour groups filled with families, friends and scout troops visited the two ships before their departure Monday morning.

The Niña and Pinta are owned by the Columbus Foundation of the British Virgin Islands. Each ship has a staff of seven to nine, and makes 30 to 40 trips a year. The Fulton stop was the second to last stop before the ship takes a winter break for repairs. Niña first mate Dave Zenk described the ships as museum ships that represent what it was like for the sailors in the 15th century.

“We only stop maybe every two or three years at repeat stops, so it’s an opportunity to see what what Columbus’s ships were like. It’s pretty much living history,” Zenk said.

Though the ships have made stops in Fulton previously, for Zenk, this was his first time being in Fulton, though he has traveled along the Tombigbee River. Pinta first mate Eric Gissendanner said the Fulton stop was an ideal one for the company since they do a lot of inland traveling and the Tombigbee River is able to serve as a convenient waterway to travel inland and then to the ocean.

While on tour, crew members explain the history of Columbus’s voyages and his life. Gissendanner said one of the most important things they share with tour groups is that Columbus didn’t discover America or that the earth was round, but rather started the Columbian exchange.

“He was able to create trade around the world, and that opens up a Pandora’s Box where everything changes in a very, very short period of time and makes the whole world an entirely different place within 50 years,” Gissendanner said.

The crew sees hundreds to upwards of a thousand people a day during touring season, said Zenk. Gissendanner said often, people are surprised by the actual size of the ships which, at 65 feet and 85 feet, are smaller than people assume. He said they also are surprised by living conditions aboard the ship.

“These guys were not living below [the ship deck]. They all had to sleep on the deck,” Gissendanner. “Even though they were very primitive ships, they were able to do their mission well. Columbus crossed the ocean in 33 days to make his way to the New World, so it was mercifully quick for them.”

The current ship was built as an exact replica to the original Niña to commemorate and celebrate the 500th anniversary of Columbus’s voyage in 1492. The Pinta, which Gissendanner says is about 20 percent larger than the original and serves as a sort of classroom of sorts, was built 16 years after the original ship.

Zenk, who has been with the Niña ship for seven years and works with the ship four to six months each year, said that the Niña was Columbus’s favorite ship and was used on three out of four voyages.

“Columbus didn’t really achieve all of what he set out to accomplish, but he did, using these ships that were never intentioned to be transoceanic sailors, opened a whole world of exploration,” Zenk said.

Tours are from 9 a.m. to 5 p.m. Admission costs vary for age groups. More information about the Niña and Pinta’s tours can be found at ninapinta.org.

A look inside the stadium hosting Super Bowl LIV