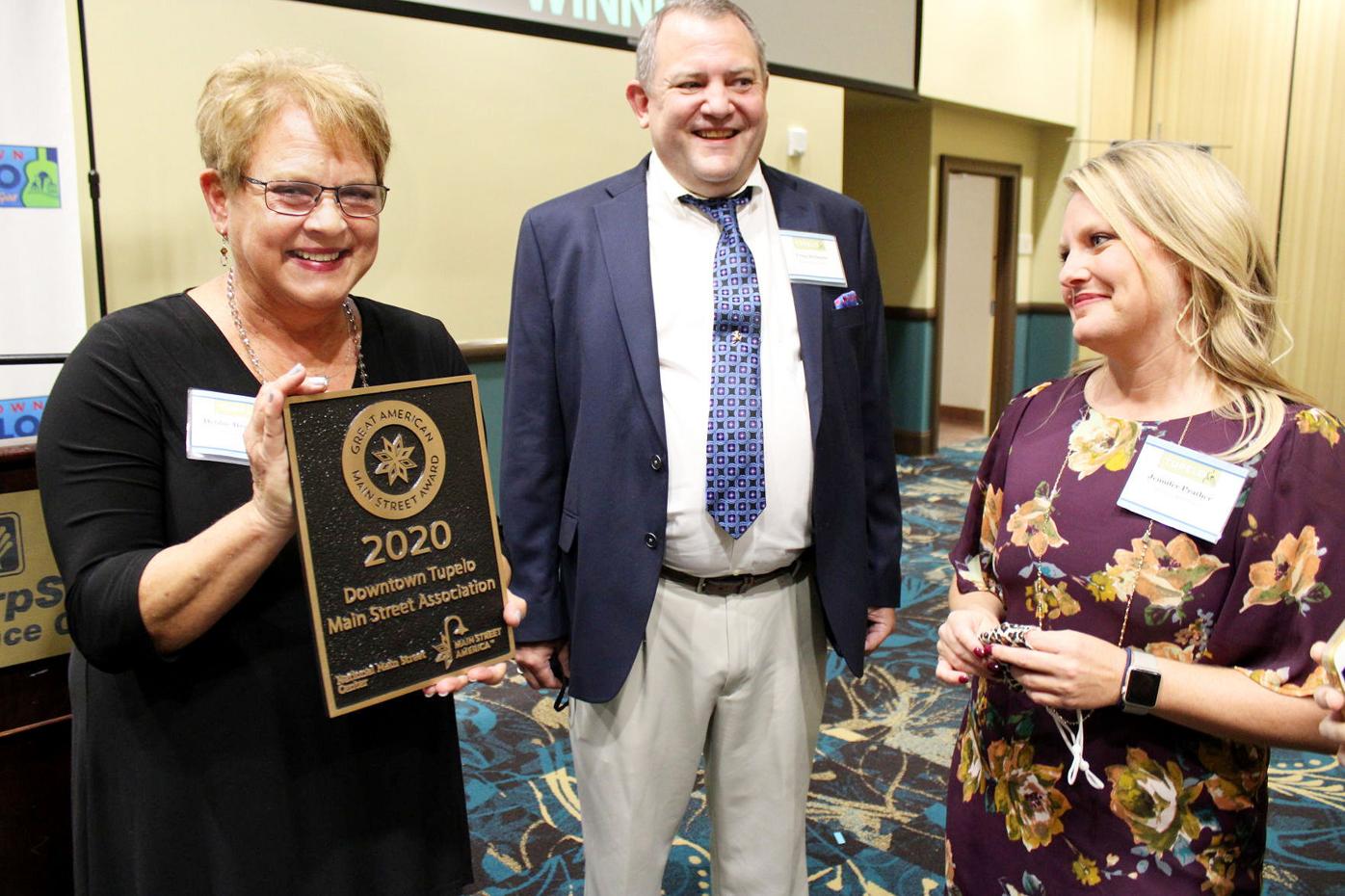 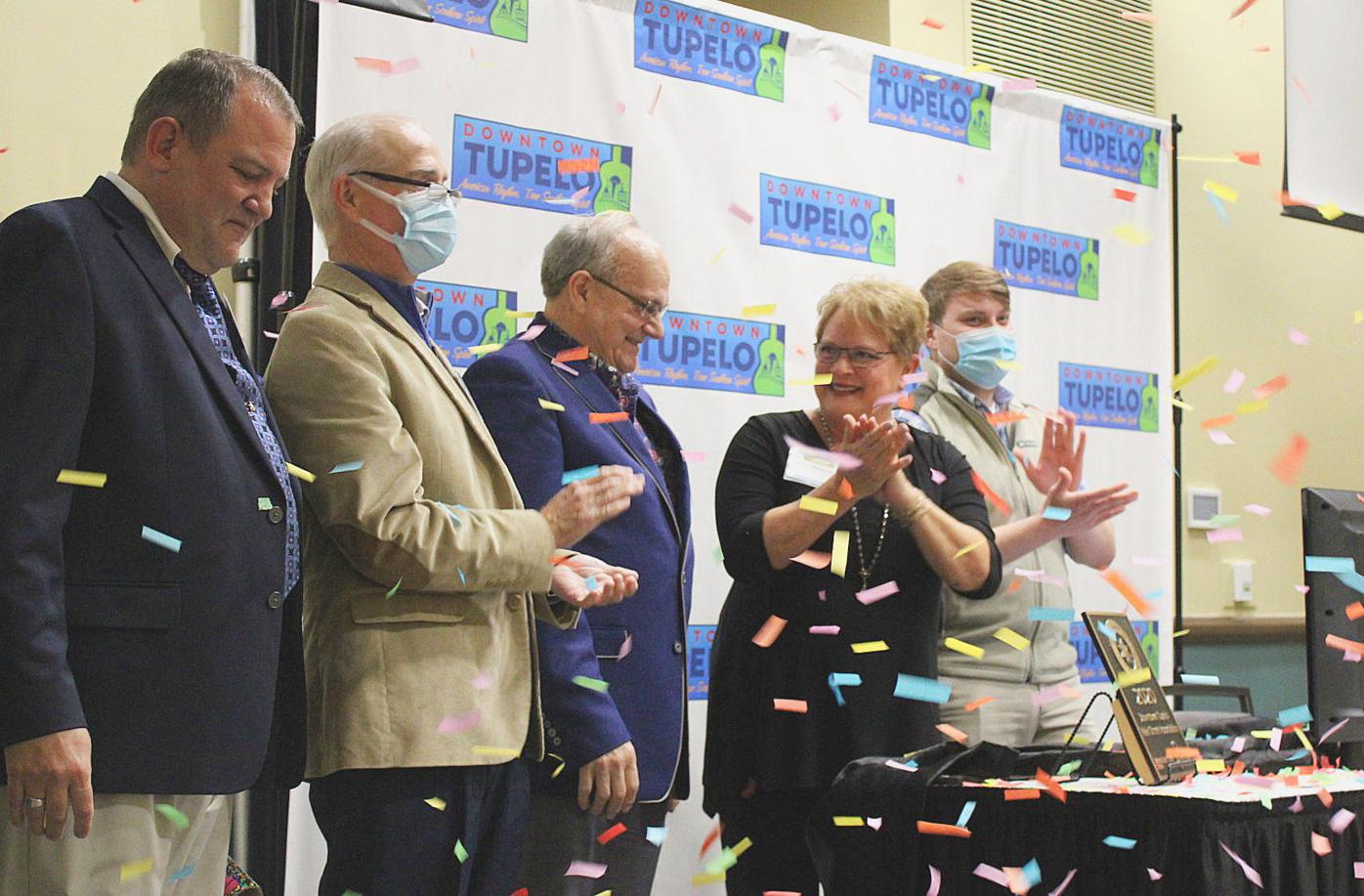 TUPELO • Downtown Tupelo Main Street Association has spent 30 years transforming the heart of the city into a lively and diverse area of economic growth and community activity; on Friday, the group was honored for its hard work.

DTMSA is one of three winners of the 2020 Great American Main Street Award, which recognizes communities for their excellence in comprehensive preservation-based commercial district revitalization. About 80 civic leaders and citizens joined the DTMSA staff Friday morning at the BancorpSouth Convention Center for the livestreamed announcement and celebration when the Great American Main Street plaque was unveiled.

The National Main Street Center, presenter of the award, recognized DTMSA along with Kendall Whittier Main Street of Tulsa, Oklahoma, and Boyne City Main Street in Boyne City, Michigan as this year’s winners.

“We are ecstatic to finally be chosen as a Great American Main Street Award winner after being a semifinalist three times,” said Debbie Brangenberg, who has been DTMSA executive director since its inception. “Ours is a unique story of transformation, where innovation, creativity and inclusion coincide. Thanks to our commitment to the Main Street Approach, we have remained true to our 1991 vision. We have forged public/private partnerships and used every available resource to transform downtown into a place worth remembering.”

Selected by a national jury of community development professionals and leaders in the fields of economic development and historic preservation, Tupelo was chosen for building a downtown with a thriving small business environment and inclusive community events.

“Tupelo is a shining example of the impact of a sustained, incremental approach to community revitalization,” Frey said.

When DTMSA began in 1990, the downtown’s vacancy rate was 13%. DTMSA has seen an entrepreneurship renaissance over the past decade, and vacancy is down to 4%. The downtown section has seen 83 businesses open, generating more than 1,300 jobs. Today, 34 minority-owned and operated businesses are open, 29 of which are female-owned.

Downtown Tupelo has built on its legacy as the birthplace of the city’s most recognized native, Elvis Presley, and transformed its Main Street from a buttoned-up corridor that shut down after 5 p.m. to a bustling district with live music, art galleries and farm-to-table restaurants thriving alongside legacy businesses.

DTMSA has continued to offer support to small business owners during the pandemic. The program launched a dedicated website to support local merchants and provide one-on-one assistance with services like e-commerce support, social media training and web development. DTMSA has also helped coordinate the application process for the local Paycheck Protection Program and worked with the city of Tupelo and business owners to allow parklets for outdoor dining and live entertainment.

The association has leveraged public and private partnerships to drive investment and development downtown, including converting the old fairgrounds area into Fairpark – a vibrant mixed-use district. Known as Tupelo’s “front porch,” Fairpark has doubled the size of downtown and is now home to a visitor center, arena, museum, restaurants, convention center and hotel.

DTMSA continued to change the face of downtown by connecting Fairpark with the original downtown section and the Elvis Presley Birthplace in east Tupelo.

In partnership with the NMSC, Project for Public Space and the Mississippi Department of Transportation, DTMSA completed the $14 million Elvis Birthplace Trail streetscape project in 2017. The project transformed the corridor into a pedestrian-friendly center of community activity by shrinking Main Street traffic lanes, adding bike lanes and wayfinding signage, reducing traffic, and increasing walkability.

The Great American Main Street Award cited the Tupelo Elvis Festival and the Community Forward Festival as examples of DTMSA’s work to promote Tupelo and to build community downtown.

Working with Councilwoman Nettie Davis, DTMSA expanded the existing Community Forward Festival to include a parade, diverse food vendors, games for all ages, line dancing and music. The festival was created to foster a positive relationship between residents and law enforcement officers.

DTMSA produced a video as part of its award application celebrating the uniqueness of Downtown Tupelo. The video, “Downtown Tupelo: A Place For Dreamers,” won a 2020 Mississippi Main Street Association award for Outstanding Community Promotion.

The MMSA also honored a downtown business, BlairHaus, for Outstanding Retail Merchandising and Mayor Jason Shelton as a Main Street Hero award winner for his support of DTMSA.

Don Lemon: Imagine how this feels for Trump