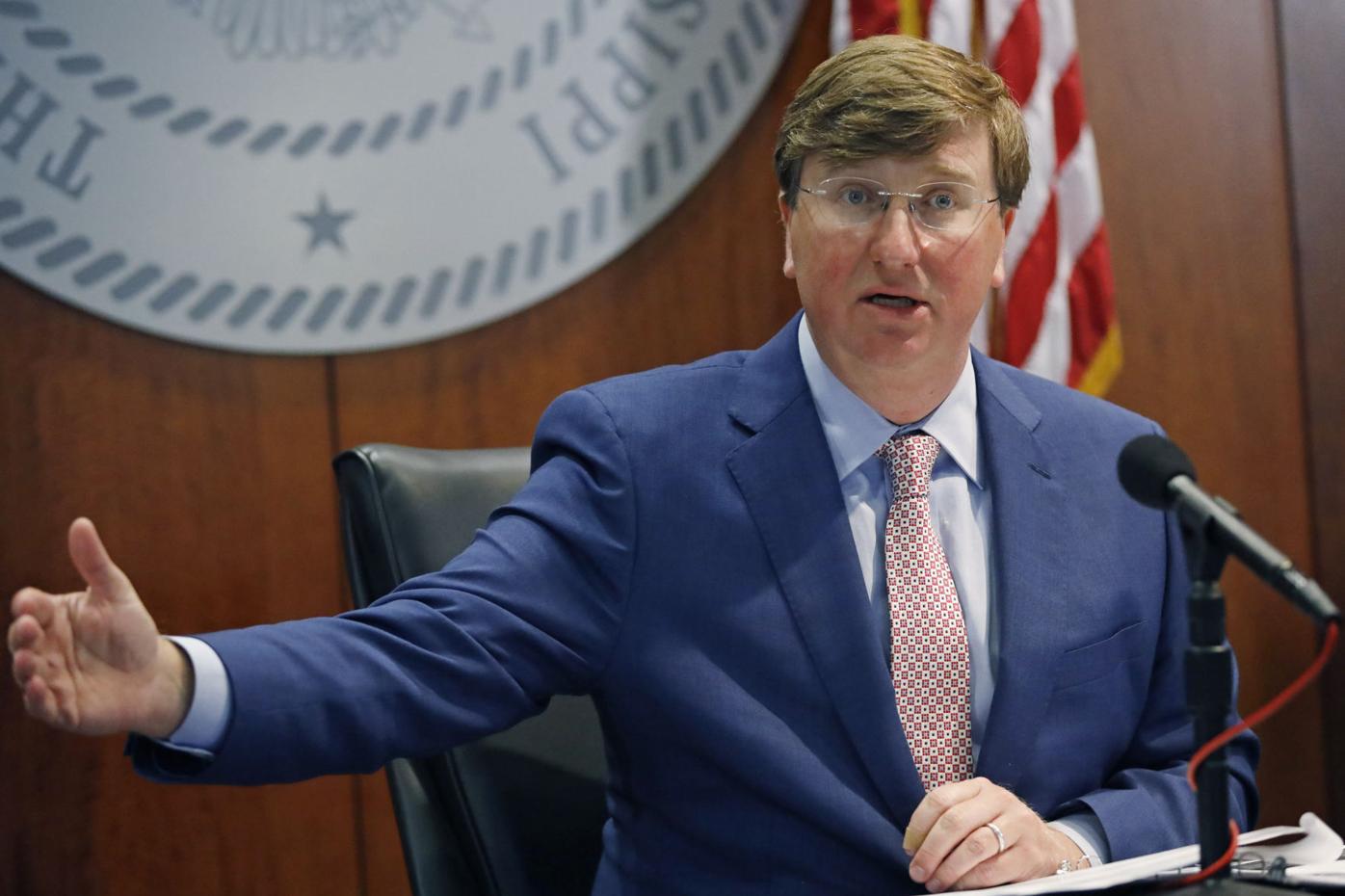 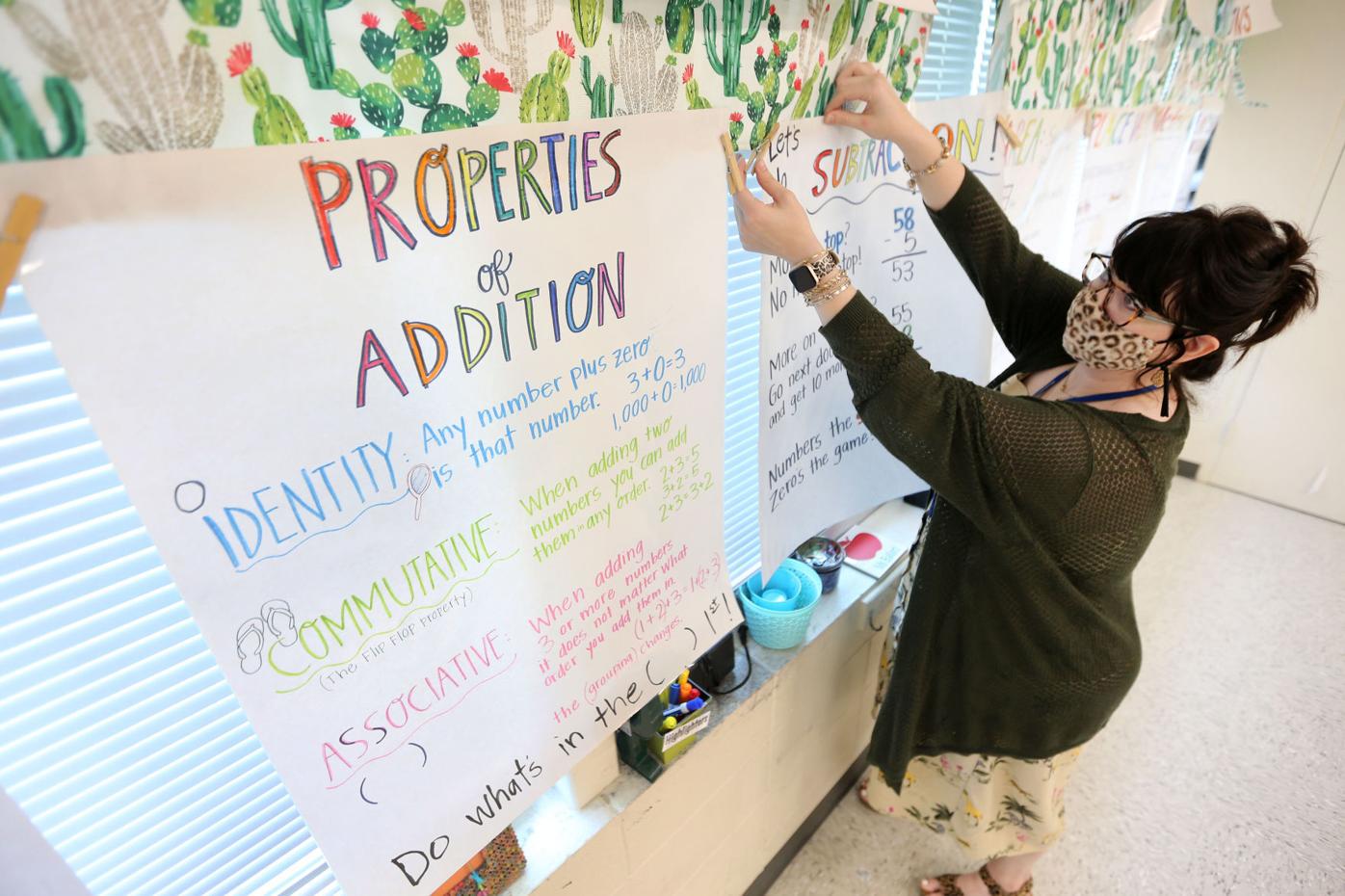 Ali Ballard, a third grade teacher at Lawhon Elementary School, hangs posters on her window curtains on Tuesday morning. Ballard will be a distance learning teacher this year and will use the posters as a background and a tool to help her students learn while online. Tupelo Public School District teachers started back on Monday, Aug. 3 and are preparing for a different year due to COVID-19. 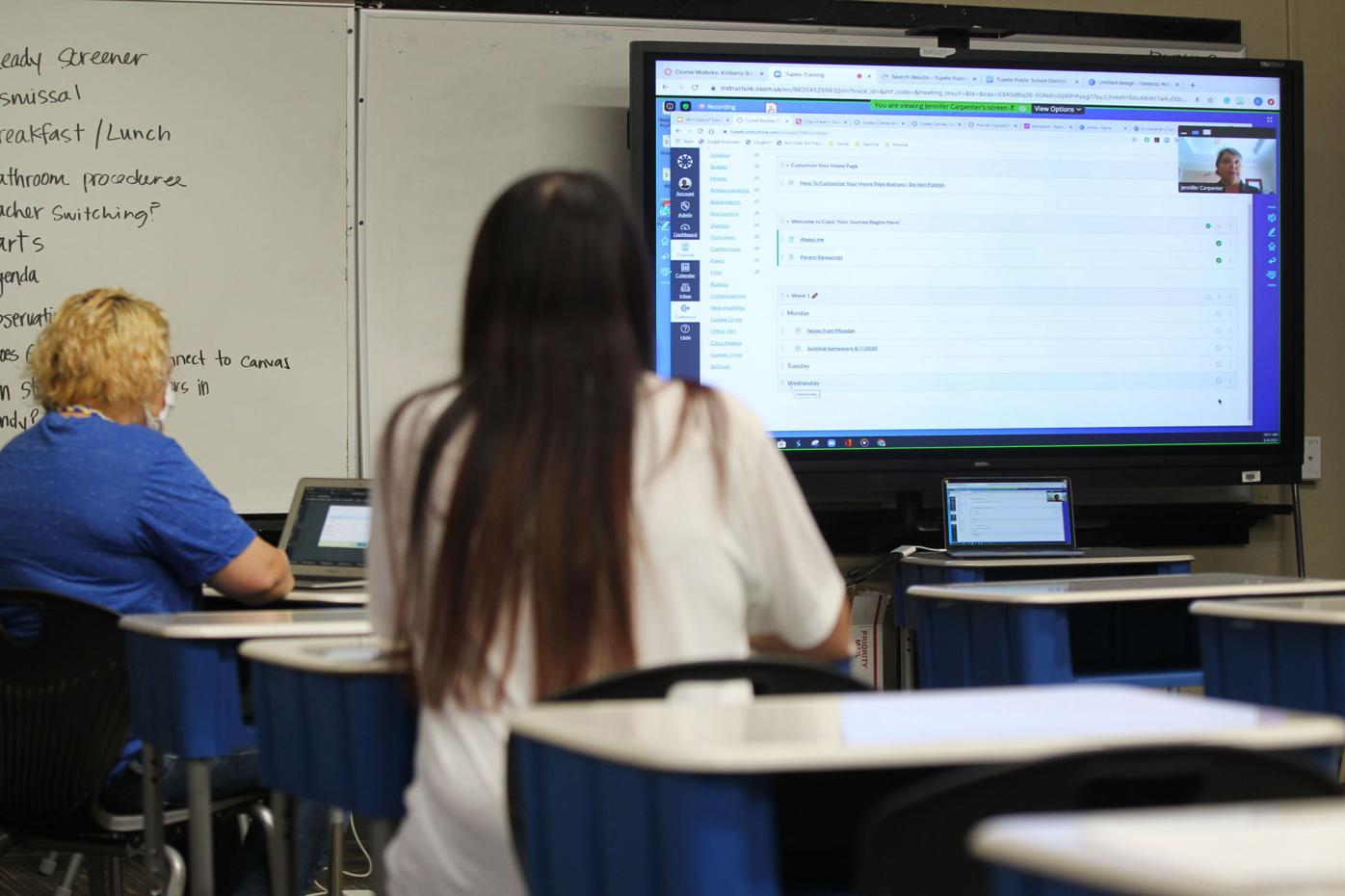 April Nichols and Kimberly Burkley, fifth grade teachers at Lawhon Elementary School, watch a training seminar about Canvas, the online distance learning program the district is using this year. All teachers trained on Canvas Tuesday morning in case there is another shutdown due to high coronavirus numbers.

Ali Ballard, a third grade teacher at Lawhon Elementary School, hangs posters on her window curtains on Tuesday morning. Ballard will be a distance learning teacher this year and will use the posters as a background and a tool to help her students learn while online. Tupelo Public School District teachers started back on Monday, Aug. 3 and are preparing for a different year due to COVID-19.

April Nichols and Kimberly Burkley, fifth grade teachers at Lawhon Elementary School, watch a training seminar about Canvas, the online distance learning program the district is using this year. All teachers trained on Canvas Tuesday morning in case there is another shutdown due to high coronavirus numbers.

JACKSON • Gov. Tate Reeves issued a statewide mask mandate on Tuesday afternoon for public gatherings and retail stores for the next two weeks and signed an executive order requiring that masks be worn in schools by all teachers and students unless there is a medical reason.

The statewide mask mandate will take effect on Wednesday morning with exceptions for children under 6 years old, those who cannot cover their face for medical or behavioral conditions and those at religious worship.

The decision to implement a statewide mandate was made in a “push to allow schools to safely reopen,” Reeves said. During a press conference on Tuesday, he implored Mississippi residents to stay home as much as possible over the next two weeks, stay away from large social gatherings and allow those who have currently tested positive to self-isolate as it will have a significant impact on slowing and reducing the spread of the virus.

“One thing that I think all 3 million Mississippians can agree on is we want to get back to a more normal life,” Reeves said. “What I’m trying to do is lay out a roadmap by which we can do so in the most expeditious manner possible, understanding and realizing that we are dealing with issues that no one in the country has dealt with in well over 100 years.”

He also signed an executive order delaying the start of some 7-12 grade schools until Aug. 17 in eight counties considered to be COVID-19 hot spots: Bolivar, Coahoma, Forrest, George, Hinds, Panola, Sunflower and Washington.

The affected counties have more than 200 total cases and have had 500 cases per 100,000 residents in the last two weeks, Reeves said.

No Northeast Mississippi counties are affected by the executive order. Lee County School District plans to return on Thursday, while Tupelo Public School District will bring students back on Aug. 12.

But Reeves did suggest that if he were overseeing districts in one of the 37 counties that have been under a targeted mask mandate from the state, which includes Lee and Pontotoc counties, he “would try to delay in-person schools until Aug. 17” as he has ordered the eight hot spot counties to do.

He also said that school districts should strongly consider amending their own plans, particularly for grades 7-12, to reopen eight to 12 days from now to “give us the time hopefully for the number of cases to decline.”

“But I believe people closest to the actual classrooms are better equipped to make that decision at this time than I am,” Reeves added.

State Health Office Dr. Thomas Dobbs said on Tuesday that “if we can safely delay for a few weeks for an entire school district, that makes total sense.”

“It’s especially important that we consider delaying school for older kids, the middle schoolers and high schoolers, because we know they’re just as likely to transmit it as young adults,” Dobbs said.

Reeves reiterated during Tuesday’s press conference that Mississippi is facing two crises as it tackles the question of how to reopen schools safely: How to prevent rampant community spread of COVID-19 and how to prevent the lifelong damage of extended school closures for the state’s children.

“We have to balance the very real risk of the virus and the lifelong damage of school closures,” Reeves said. “To do that, we have to safely provide education for the greatest possible number of children. In my opinion, the best way to accomplish that is to provide guidelines, allow local school leaders to tailor them and step in with the authority of state government if and when it is absolutely necessary.”

Dobbs said the Mississippi State Department of Health is closely monitoring Corinth School District, which returned to in-person instruction for all students on a traditional five day per week schedule on July 27, and referred to the district as a “model” for how to return safely and trace students after an exposure.

Six students, five of which have actually attended in-person classes at Corinth High School, have tested positive since students returned to school last week, Reeves confirmed during the press conference. CSD Superintendent Dr. Lee Childress told the Daily Journal on Tuesday that 89 students are currently quarantined due to having been in close contact with the five positive cases.

“The administration did the right thing,” Reeves said. “They contract traced, they figured out who they came in close contact with, they have isolated them, they won’t come back into the classroom for 14 days. Meanwhile, the hundreds and hundreds and hundreds of other kids who did not come in close contact now have the opportunity to continue their learning and hopefully catch up from what they missed in the spring and perhaps in the summer.”

Dobbs said the positive cases at Corinth are a reflection of the community, not the school itself.

“These are kids who walked into the school with coronavirus, and that they were able to find and quarantine those kids is great,” Dobbs said.

He added that returning to school is “going to be a challenge” and schools should expect to see positive cases even if they do everything right.

“Without a doubt, every school that opens is going to have some child, some teenager, with coronavirus walking through the door,” Dobbs said. “Just based on the law of averages, we’re going to see that.”

Reeves’ announcement that he will largely allow schools to return as planned, which for some is as soon as Wednesday morning, comes as state health officials and educators have asked him to delay reopening statewide.

Dr. LouAnn Woodward, Vice Chancellor for Health Affairs and the University of Mississippi Medical Center, and Erica Jones, President of the Mississippi Association of Educators (MAE) requested that schools delay starting until after Labor Day in an effort to allow COVID-19 case counts, hospitalizations and deaths to trend downward to keep everyone at school safe.

After Reeves’ press conference on Tuesday afternoon, MAE sharply criticized his plan to allow most districts to return to in-person instruction.

“The governor’s plan, in its current form, is reckless and irresponsible,” MAE wrote in a statement. “It ignores the advice of the state’s top medical officials and is putting students and educators and their families at risk.”

Reeves said during Tuesday’s press conference that over the next several weeks and possibly months, Mississippi is not “going to get to a point where there is no coronavirus in our state.”

“That is not a realistic goal and I cannot sit here and tell the people of Mississippi that that’s what we’re trying to do in the short run,” Reeves said.

For now, Reeves said the state will do everything possible to protect public health and the integrity of the healthcare system as schools reopen with a statewide mask mandate in effect.

“Our goal today is the same as it was in early March – to ensure that every single Mississippian that can get quality care actually gets that quality care, and I think we can accomplish that with the plan that’s laid out today,” Reeves said.

Exotic dancers explain 'Get Your Booty To The Poll' campaign