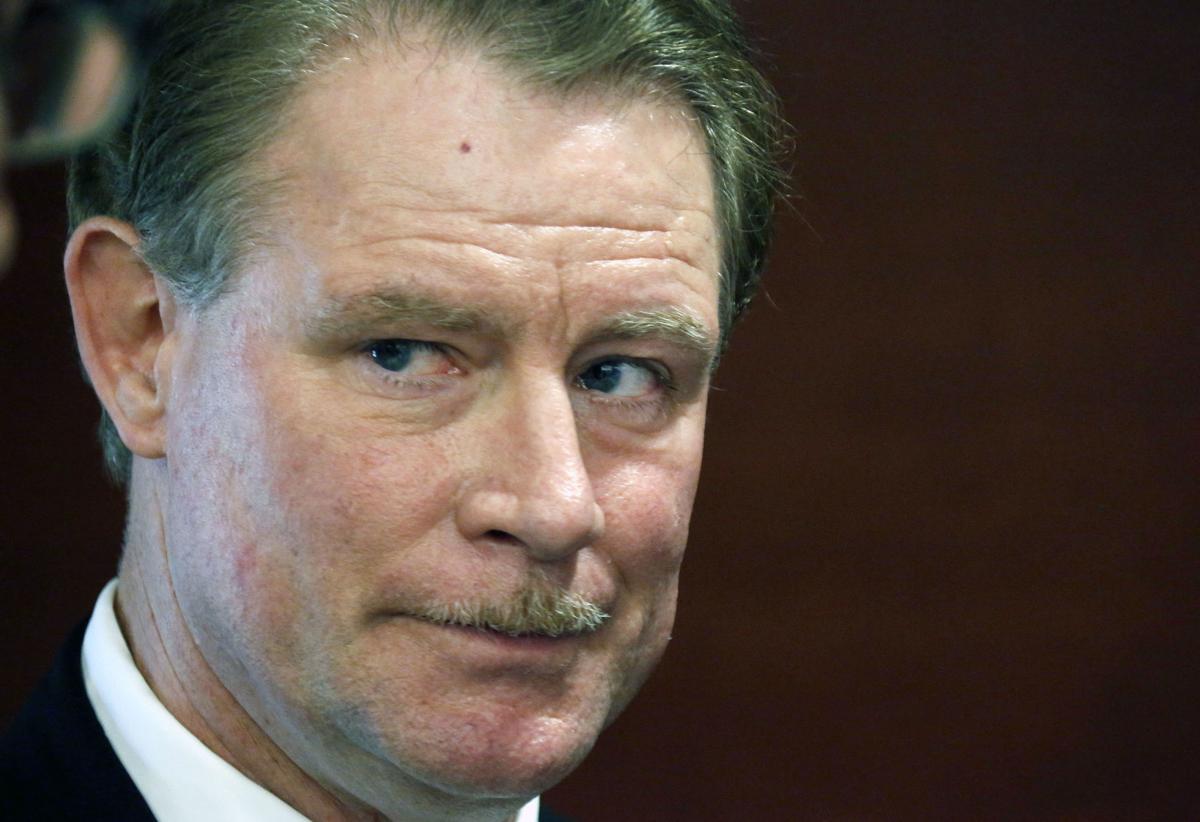 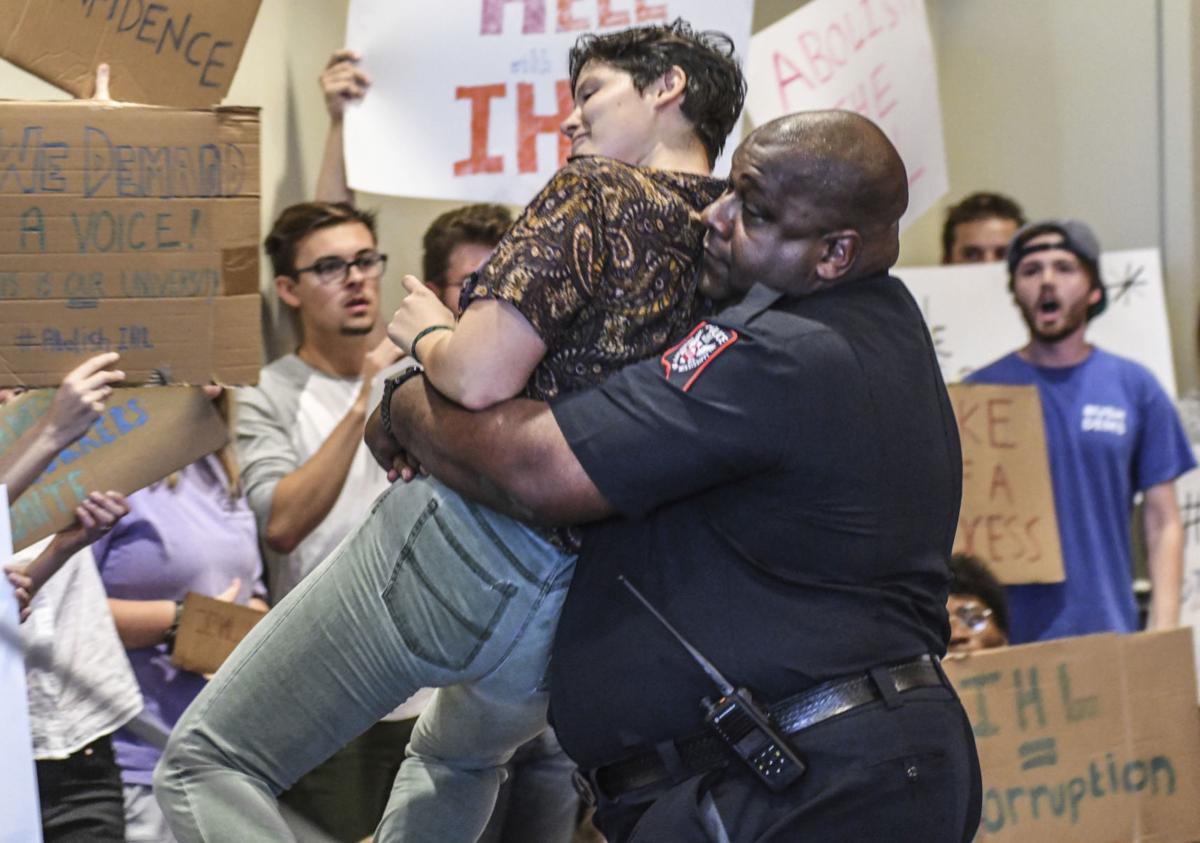 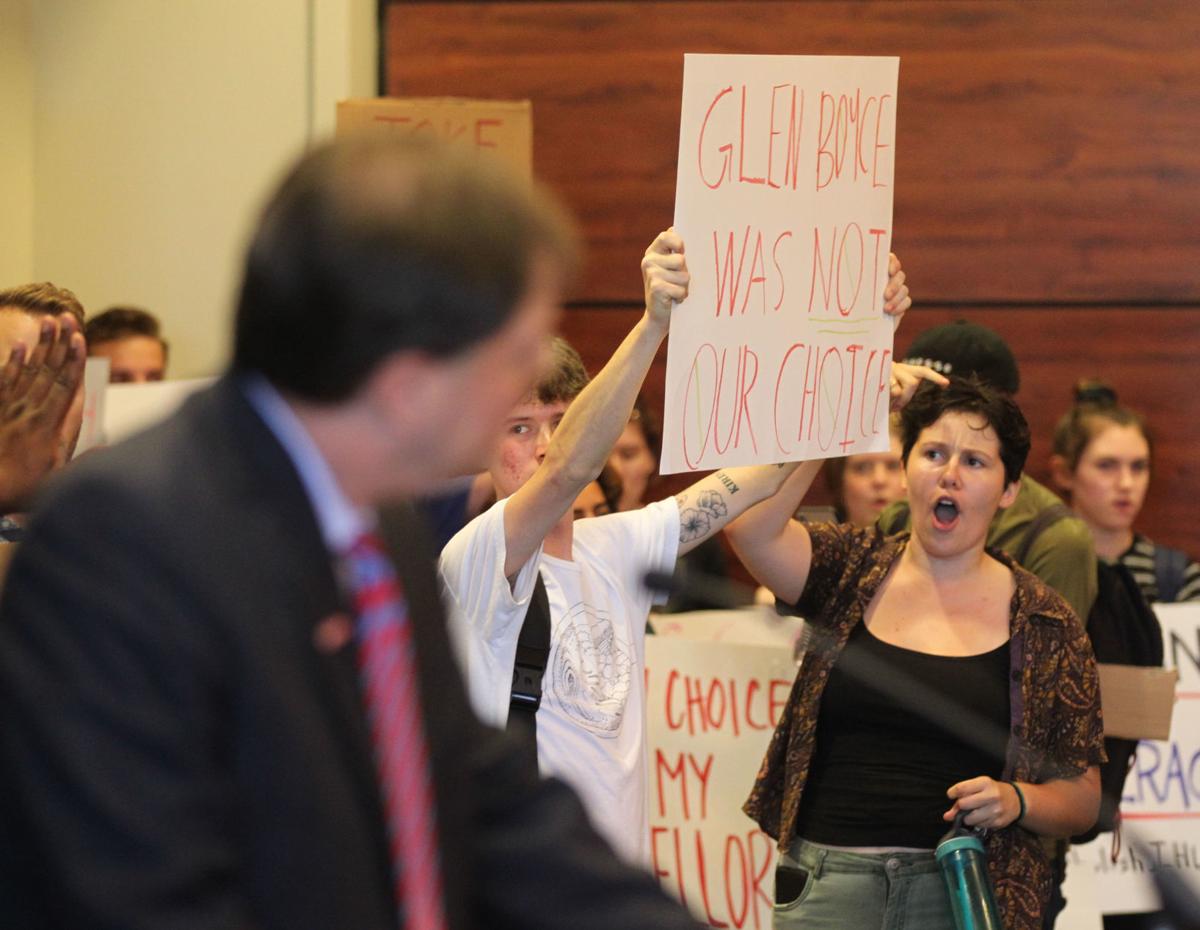 Cam Calisch starts a chant against incoming University of Mississippi Chancellor Glenn Boyce at his announcement on Friday. Calisch was forcibly removed by University Police Chief Ray Hawkins and soon after Hawkins cancelled the announcement program.

Cam Calisch starts a chant against incoming University of Mississippi Chancellor Glenn Boyce at his announcement on Friday. Calisch was forcibly removed by University Police Chief Ray Hawkins and soon after Hawkins cancelled the announcement program.

UNIVERSITY • When Glenn Boyce first met with notable University of Mississippi alumnus Dickie Scruggs several months ago as a consultant for the state college board, the two talked for almost two hours about the future of the university and its vacant chancellor post. But, Scruggs had no idea he was speaking with the man who would ultimately fill that post.

Scruggs was impressed by Boyce’s vast knowledge of the university and the state’s education system. He was so impressed, Scruggs thought Boyce himself should apply to be the next leader of the state’s historic flagship university, a job that opened up in late 2018.

“I suggested to him ‘You need to apply for the job yourself,’ but he said he really didn’t want to do it,” Scruggs told the Daily Journal. “He was just hesitant. I never got the feeling that he campaigned for the job.”

Boyce’s meeting with Scruggs was one of several meetings Boyce, the former president of Holmes Community College and state commissioner of higher education, would arrange as he fulfilled an approximately $87,000 consulting assignment with the state Institutions of Higher Learning. As a consultant, he was to speak with university constituents and map out what qualities the University of Mississippi’s next chancellor should have.

Boyce’s work in turn would help guide the IHL board as it moved to select a new chancellor following the resignation of Jeffrey Vitter, who served a brief tenure.

The IHL board also convened a 39-person panel of students, faculty, administrators, alumni and community members to provide input on the process.

According to accepted procedures – which the IHL board always acknowledged it could waive – the Campus Search Advisory Committee was to provide input on all formal applicants for the chancellor’s job.

Select CSAC members were also to participate throughout multiple rounds of interviews with finalists. A preferred candidate would then visit campus for further meetings and vetting before a final vote by the 12-person IHL board.

Instead, the IHL board announced on Friday that the next University of Mississippi chancellor would be the man who worked about three years for IHL as commissioner of higher education and consulted for the board early in the chancellor search process.

Scruggs said when he and other university alumni heard the news, they immediately thought Boyce had all of the qualities to be a great chancellor, but were dissatisfied with how IHL officials conducted the process at its end.

“I don’t know if this was something the board wanted to do all along,” he said. “I just wish if that were the case, they would have done it differently. I’m convinced that he has all the right stuff to be a good chancellor.

Ford Dye, the chairman of the IHL board search committee, told members of the media on a conference call Friday that Boyce and other candidates went through a back door process, and were never screened by the CSAC.

Multiple officials familiar with the process also confirmed that Boyce was one of those back door candidates.

Dye was unapologetic about the process and defended it on the conference call.

“Our policy allows us if the board deemed it necessary to have candidates bypass the CSAC process within our process as outlined on the IHL website,” Dye said.

Dye said members of the CSAC were instrumental in letting the board know what type of candidate they wanted and two members of the advisory committee were a part of the interviews.

However, multiple CSAC members said they had no knowledge that Boyce was a candidate for the job and that he did not apply for the position and was never scored by the advisory committee.

“This process wasn’t transparent and was a sham of a process,” one CSAC member told the Daily Journal. “IHL didn’t respect us enough to give us a stake in the process.”

Some CSAC members even took to social media to voice their frustration with how IHL handled Boyce’s announcement.

Aimee Nezhukumatathil is a renowned poet and served on the CSAC. Nezhukumatathil tweeted a picture of a garbage dumpster on fire and said she felt like the process had been “pointless” after being a member of the committee.

“Hi, someone please tell me I didn’t waste hours away from my family for a job that was … utterly pointless?” she tweeted. “Excuse me while I go scream into a pillow now.”

Ben Craddock, a former punter for Ole Miss football team, was also a member of the search advisory committee and took to Twitter to say he thought IHL’s decision was a “slap in the face.”

“Seriously don’t know what to say Spent hrs I mean hrs on reading through the candidates, ranking them & etc,” Craddock tweeted. “Time away from my family bc I truly want what’s best for our university. To have the IHL board completely ignore all the work WE ALL put in is a complete slap in the face.”

On Saturday, executive officer of the Senate of the Faculty on campus called IHL's actions "egregious" and condemned the way in which Boyce's appointment was conducted.

In a statement, the executive officers condemned what they saw as  a lack of transparency, the premature termination of the search, the de-selection of all applications, the mishandling of the campus announcement and the physical removal of student protesters at the press conference.

"We stand committed to The University of Mississippi and are deeply concerned this process has caused immeasurable harm to our institution and its reputation," the statement read.

When asked by the Daily Journal if he planned to return the funds he received for consulting for the same board that hired him, Boyce initially said he didn’t know.

When asked by a different reporter if he would return the money just to ease the public’s perception of the hire, Boyce said the reporter had given him “something to think about.”

However, Boyce said he didn’t feel he had done anything unethical.

Boyce reiterated to members of the media that he didn’t hire himself and that the IHL Board of Trustees hired him.

“Once I completed my work, which was completed before the search ever started, I was finished,” he said. “I didn’t do any more work during the time the search was conducted.”

A person with knowledge of the selection process told the Daily Journal that even when a back door candidate is named, IHL trustees have still typically conducted a preferred candidate visit to allow constituents of the respective college to meet with the candidate.

“The last step of any search process is to name a preferred candidate,” the person said, who preferred to speak under the condition of anonymity. “Normally, advisory members would have assisted the board. The preferred candidate would then be vetted by the representatives of the campus, which was a bit of a formality because it would usually happen on the same day (as a final vote).”

This person said Boyce’s appointment’s bypassed the preferred candidate visit, and Boyce never met with representatives of the campus.

Dye said on the call that Boyce didn’t meet with campus representatives because “there’s a lot of division in the Ole Miss family” and that “a lot of twist and turns” occurred during the search process.

Last month, Oxford businessman Campbell McCool told IHL officials at a public forum for the chancellor’s search that he heard rumors that now can be seen to resemble the manner of Boyce’s appointment.

“I’ve heard it from so many people and it’s so specific, and the exact same verbiage each time is that this group is going to review all the applicants and nobody’s quite going to come up to par and that the job is going to be offered to a former consultant to this board who was not an applicant,” McCool said. “I’m not here to disparage any particular person, but I’m asking that this please be a fair and legitimate process.”

Boyce is expected to be installed as the 18th chancellor of the university with the state’s largest student population by Oct. 13.

Beyond the Call of Duty Volunteer EMS

'On another planet': Tapper reacts to Trump's virus comment