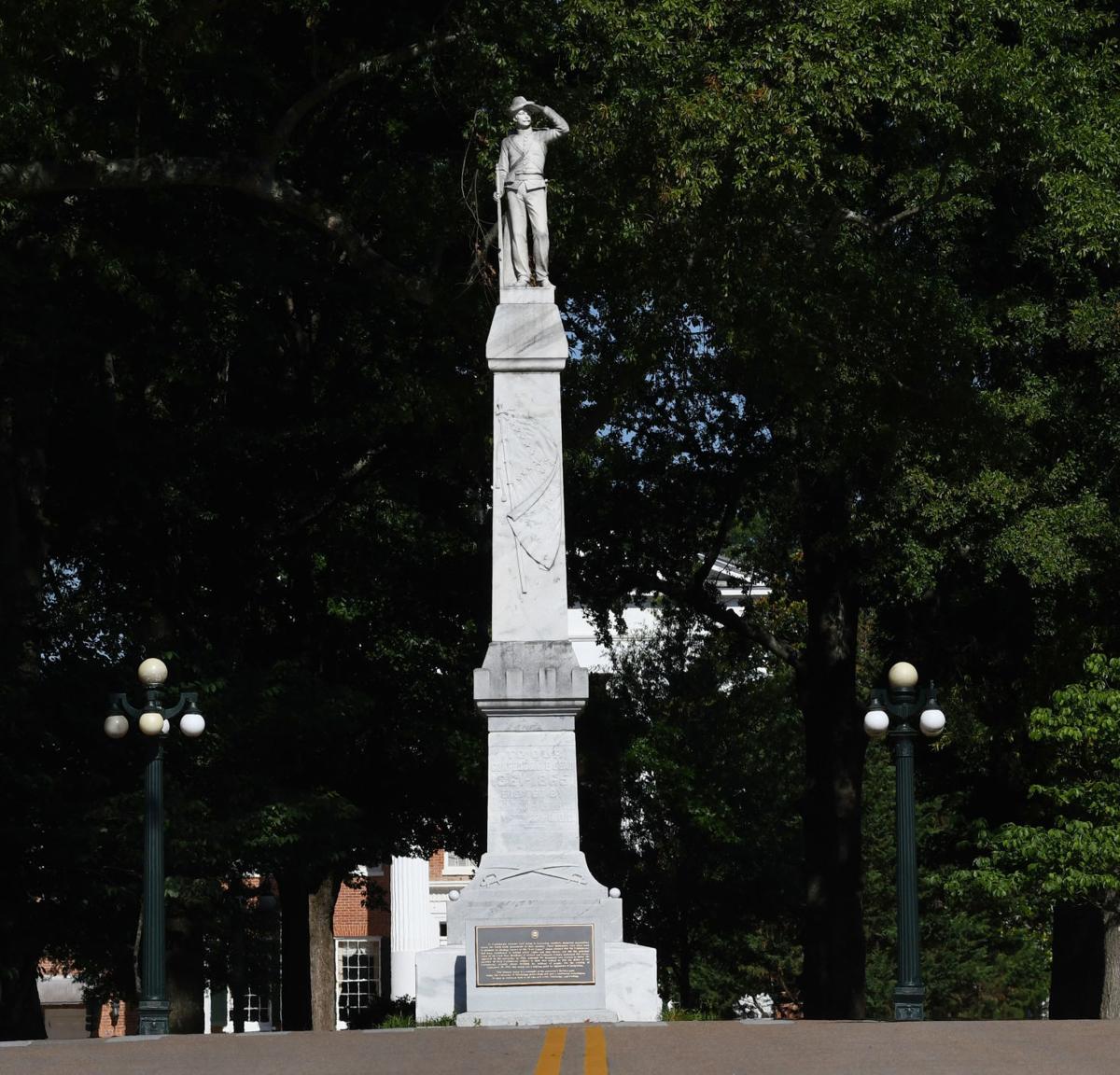 The Board of Trustees of the Institutions of Higher Learning voted Thursday to allow the University of Mississippi to relocate the Confederate statue to the campus cemetery located south of the C.M. “Tad” Smith Coliseum. 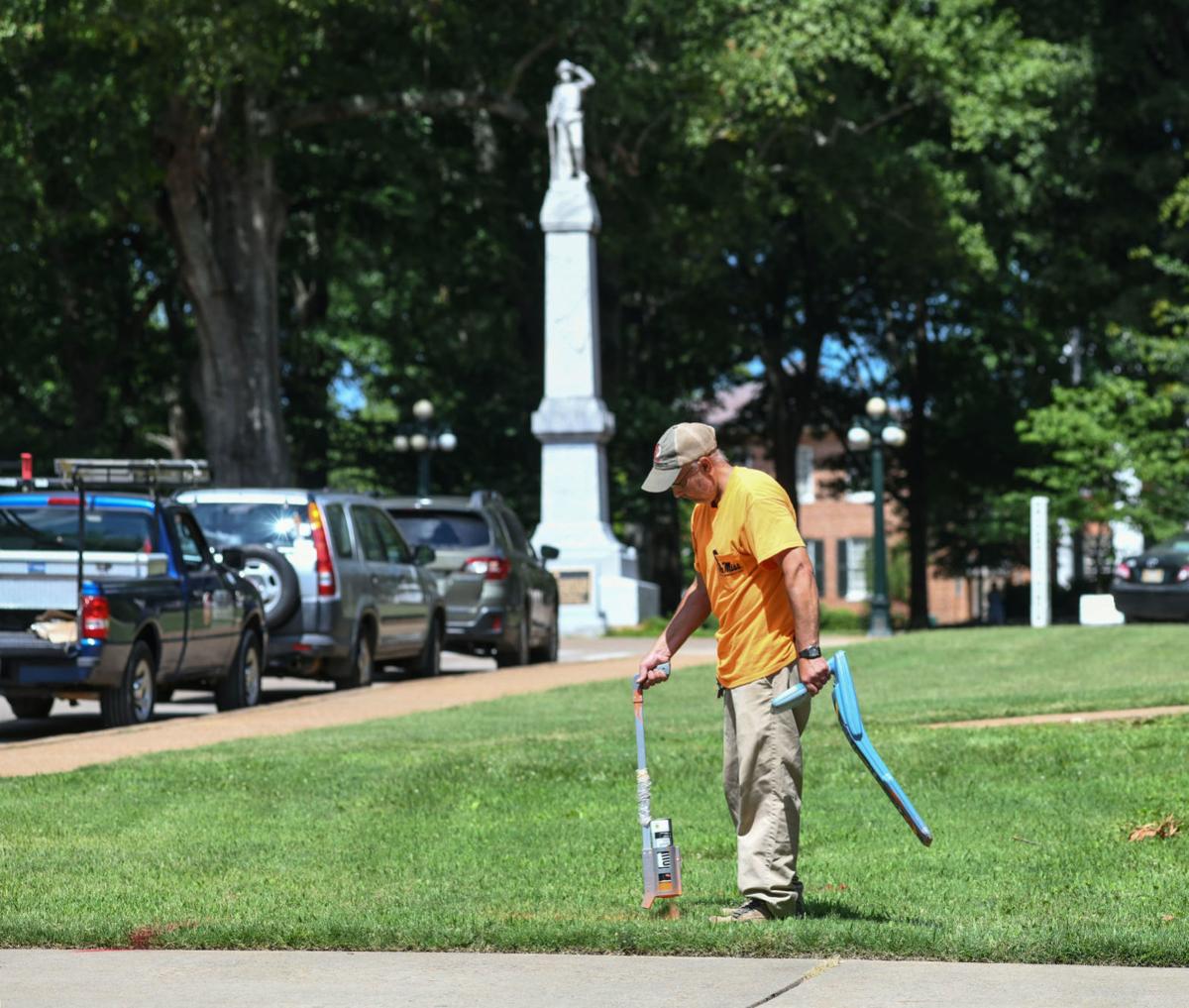 A University of Mississippi employee locates underground utilities near where the Confederate statue at the University of Mississippi stands in the Circle on campus, in Oxford on Thursday. The Board of Trustees of the Institutions of Higher Learning voted Thursday to allow the university to relocate the statue to the Confederate cemetery located south of the C.M. “Tad” Smith Coliseum.

The Board of Trustees of the Institutions of Higher Learning voted Thursday to allow the University of Mississippi to relocate the Confederate statue to the campus cemetery located south of the C.M. “Tad” Smith Coliseum.

A University of Mississippi employee locates underground utilities near where the Confederate statue at the University of Mississippi stands in the Circle on campus, in Oxford on Thursday. The Board of Trustees of the Institutions of Higher Learning voted Thursday to allow the university to relocate the statue to the Confederate cemetery located south of the C.M. “Tad” Smith Coliseum.

JACKSON • The Mississippi Institutions of Higher Learning Board of Trustees voted on Thursday morning to approve the University of Mississippi’s request to relocate the Confederate monument from its prominent location in the Circle on University Avenue to the campus cemetery.

Commissioned by the United Daughters of the Confederacy, the 29-foot monument has stood at the center of the Ole Miss campus since 1906, but the university will now move it to the University Cemetery near the Tad Smith Coliseum.

“The Board of Trustees approved the request from the Chancellor of the University of Mississippi,” Commissioner of Higher Education Dr. Alfred Rankins Jr. said. “He and his team devoted considerable time and attention to developing a thoughtful plan to relocate its Confederate Monument to the University Cemetery.”

The item was tabled at IHL’s January board meeting, pending review of a progress report from the university regarding the recommendations from the 2017 Chancellor’s Advisory Committee on History and Context’s report. UM provided the requested information, including the status of proposed improvements to the cemetery on the UM campus.

“The Board reviewed the detailed plans for the new site, considered events on college campuses across the South involving Confederate monuments, and listened to the University’s various constituency groups,” Board President Ford Dye said. “The board subsequently determined relocating the Confederate statue to be most appropriate for Ole Miss moving forward.”

The Mississippi Military Memorial Protection Act prohibits the relocation, removal or alteration of monuments commemorating military figures, including Confederate soldiers. However, the statue may be moved to a “more suitable location” on campus deemed “more appropriate to displaying the monument.”

The IHL agenda item cites the University Cemetery as “a sacred ground that serves as a final resting place for the fallen” and contends that “cemeteries have long been deemed appropriate places for war memorials.”

“The inscription on the Confederate Monument references those who are buried in the University Cemetery, and the relocation of the monument immediately adjacent to the cemetery would place the monument in a broader and more proper historical context,” IHL wrote.

The university’s submitted proposal put “tremendous thought and planning into the work to be completed at the University Cemetery” and the site will be not only a “respected site for the Confederate Monument, but also a site for educational purposes on the UM campus,” according to IHL.

In an email to the university community, Chancellor Glenn Boyce said administrators are pleased to bring about this important change for the community and recognized students for their involvement in the process.

“This vote marks the culmination of years of research and discussion on how to address the monument,” Boyce said. “State law prohibits the relocation of any war memorial unless the proposed new location is more appropriate to display the monument. The approved plan allows the University to move the statue to the cemetery on campus. We are now prepared to complete this work and will do so as quickly as possible.”

The monument will be accessible by a newly-laid brick path surrounded by trees and enhanced with lighting, according to IHL. A new marker will recognize the men from Lafayette County who served in the Union Army as part of the United States Colored Troops during the Civil War.

Within the cemetery, new headstones will be added to offer remembrance for the people buried on the grounds along with a stone path to an existing marker in the cemetery.

Cameras will be added in and around the cemetery to allow for continuous monitoring by the University Police Department.

Early relocation efforts were led by the university’s Associated Student Body beginning in March 2019 when it unanimously passed a resolution calling on administrators to relocate the monument.

The relocation is expected to cost approximately $1,150,000 and will be paid for with private funds.

General contractor for the relocation project is McCarty King Construction, which is based in Tupelo.

The decision to relocate the monument comes less than three weeks after it was vandalized.

Zach Borenstein, a recent graduate of the university, was arrested on May 30 and charged with “injuring, destroying or defacing certain cemetery property, public buildings, schools, churches or property thereof,” which is a felony, after the words “spiritual genocide” were spray-painted on all sides of the monument, along with red handprints.

Chief: Slain officers had no chance to suspect an attack

How has Cuba managed to flatten the curve?