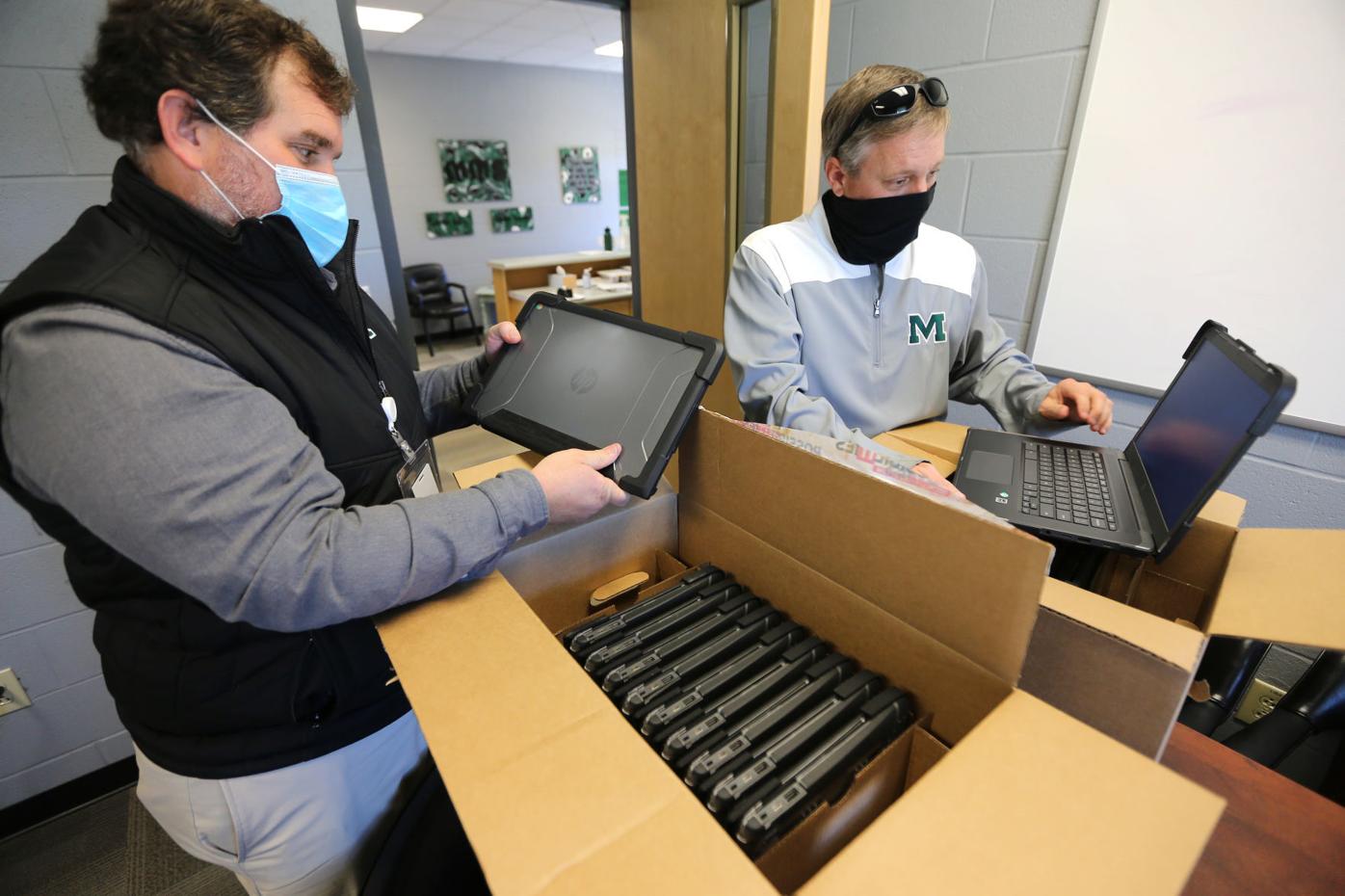 Grant Martin, Assistant Principal at Mooreville Middle School, and principal Patrick Comer open boxes of the school’s new Chromebooks, which arrived on the school’s doorstep Monday morning. The devices were purchased as part of the statewide Mississippi Connects program. 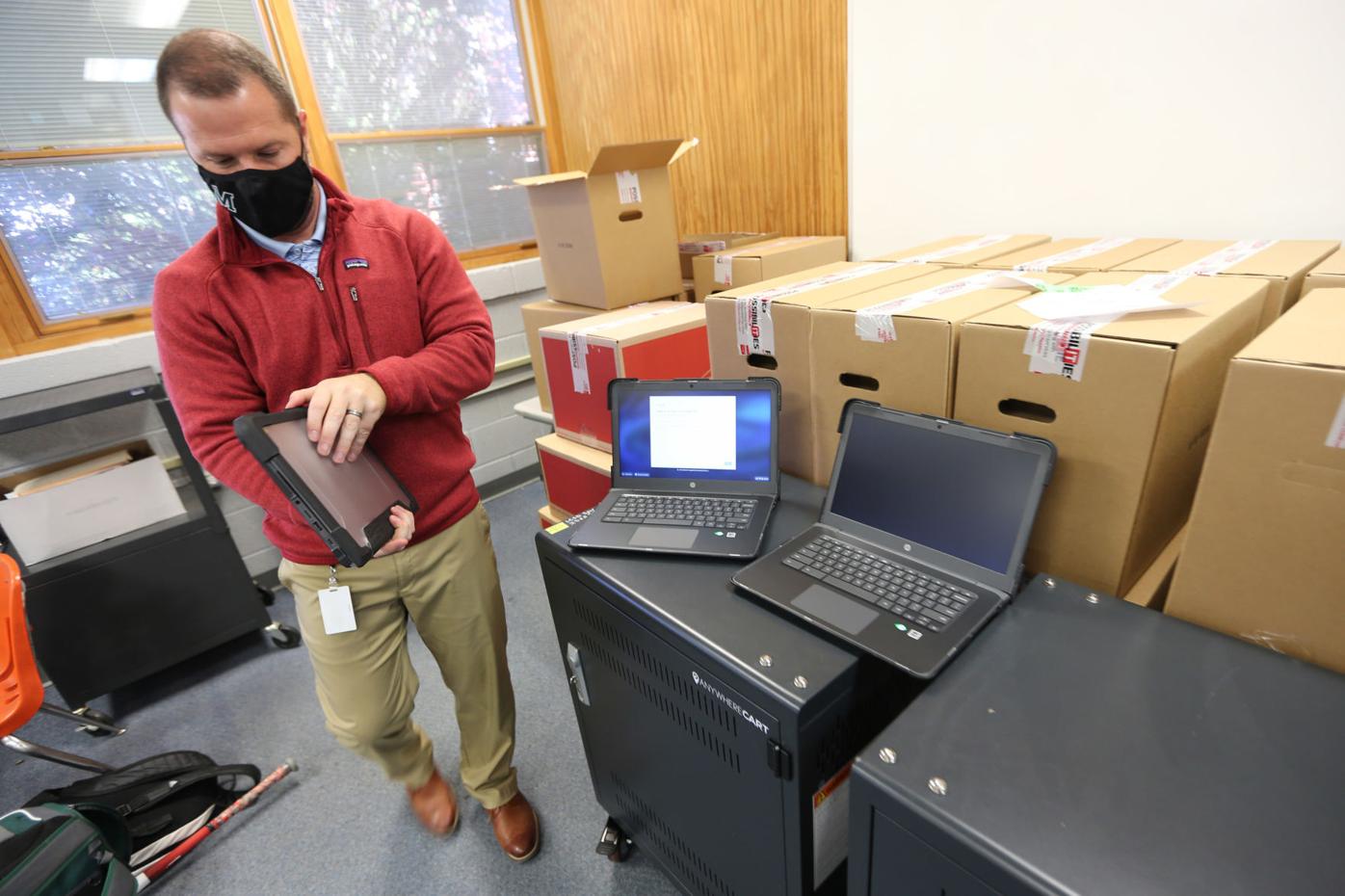 Adam Lindsey, Principal at Mooreville High School, looks over new Chromebooks that arrived at his school on Monday morning.

Grant Martin, Assistant Principal at Mooreville Middle School, and principal Patrick Comer open boxes of the school’s new Chromebooks, which arrived on the school’s doorstep Monday morning. The devices were purchased as part of the statewide Mississippi Connects program.

Adam Lindsey, Principal at Mooreville High School, looks over new Chromebooks that arrived at his school on Monday morning.

Tupelo • More than 5,000 Chromebooks ordered by the Lee County School District earlier this year began arriving at schools this week. The first shipments arrived at Mooreville’s middle and high schools on Monday and Saltillo’s primary and elementary schools on Tuesday.

The district ordered 5,680 Chromebooks, according to LCSD Technology Director Brian Newton. The remaining laptops are expected to arrive through next week.

The Chromebooks cost a total of $2,445,126.40, which comes out to $430.48 each. That price includes the cost of the laptops themselves, Chrome licenses, cases, and services to enroll them into the school’s Google domain.

Newton said there are roughly 6,400 students throughout the Lee County School District, and a fair number of Chromebooks were already in use across the district’s schools. But the incoming laptops, along with the existing supply, will ensure every student on all campuses has access to a device.

The purchase was made as part of an order placed by the Mississippi Department of Education on behalf of all schools in the state. The department purchased a total of nearly 390,000 devices for schools statewide through the Mississippi Connects program. The devices were set to be delivered from mid-October through November.

Newton said all the district’s 5,000-plus Chromebooks will have to be delivered before the devices’ serial numbers can be uploaded into the district’s system and the devices distributed to students. The timeline for getting the computers into students’ hands depends on when they’re delivered to the schools, and Newton said it’s likely they’ll continue arriving through at least next week.

He said it will be tough to distribute the laptops before Christmas break and thinks they’ll most likely be passed out when students return to school in January.

The Mississippi Legislature allocated $200 million earlier this year to purchase devices through two laws: the Equity in Distance Learning Act (SB 3044) and the Mississippi Pandemic Response Broadband Availability Act (HB 1788). The state’s goal is for every student to receive the technology needed to learn both at school and at home.

“We appreciate the legislature allocating these funds,” LCSD Superintendent Coke Magee said. “The CARES Act and EDLA has provided us with the needed resources to provide technology to a lot of students that we could not have otherwise provided it to.”

Magee said many students have been using personal laptops and smartphones to complete assignments and activities for classes. The new Chromebooks will give each student equal access to technology.

“We’ve been implementing Google Classroom across the district, not just with our distance learners but also with our in-person students,” Magee said. “So this is going to allow us to provide every student with technology they need to enhance that virtual education.”

In many instances, students will be able to carry their Chromebooks home for after-school use, although those details are still being worked out.

The Mississippi State Department of Health (MSDH) on Thursday reported 1,395 new cases of COVID-19 and 19 deaths as of Nov. 18. MSDH also repo…