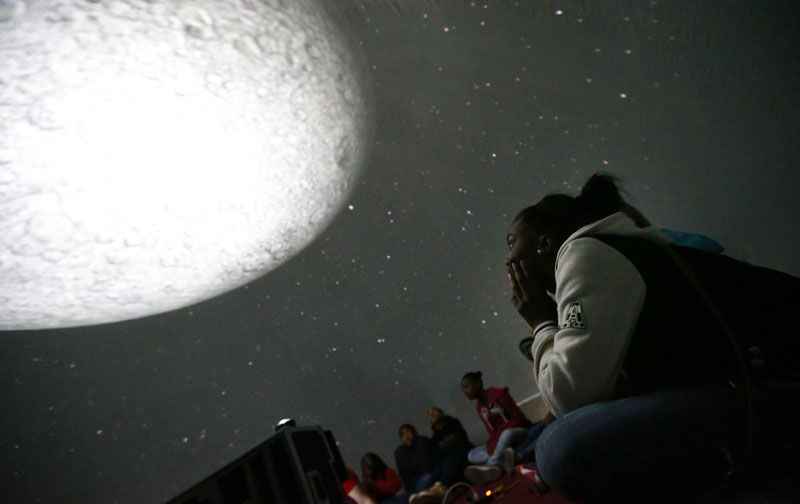 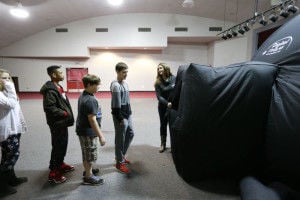 Buy at photos.djournal.comShannon Middle School student Christani Johnson, 12, and her classmates see a close-up image of the moon inside the mobile planetarium from the University of Mississippi's Center for Mathematics and Science Education on Friday.

Buy at photos.djournal.comShannon Middle School student Christani Johnson, 12, and her classmates see a close-up image of the moon inside the mobile planetarium from the University of Mississippi's Center for Mathematics and Science Education on Friday.

SHANNON – Shannon Middle School students watched as images of the sun, moon, stars and planets moved across an enclosed dome above them.

After learning about the solar system, the school’s approximately 300 students got to see it without even leaving campus. That’s because the mobile planetarium from the University of Mississippi’s Center for Mathematics and Science Education visited the school’s auditorium.

“It is an interesting way for them to see what we are doing in class,” said Shannon eighth-grade science teacher Tracy Leake.

Classes of sixth-, seventh- and eighth-graders visited the large canvas dome throughout the day. Inside, a projector displayed a variety of images of celestial bodies.

“It was pretty amazing,” said eighth-grader Shelby Lindsey, 14. “You got to experience outer space. None of us will probably ever get to go out there, but it was like we did.

“There are so many different galaxies. I knew there were a lot of stars, but I didn’t think there were that many.”

Added classmate Malaysha Townsend: “It was a good experience to actually see the moon up close and to see the stars.”

The traveling display visits a different school most Fridays. Two weeks before it arrives on campus, the CMSE sends a kit of activities, resources and lesson plans based on Mississippi science standards.

Among them is a model of the solar system using real-world objects. The sun is a bowling ball, Mercury is a cupcake sprinkle, earth and Venus are peppercorns and Jupiter is a macadamia nut. Students then go outside and follow a guide telling them how far apart each planet must be placed.

“The most important thing is to make science real,” said Whitney Jackson, graduate research assistant with the Center for Mathematics and Science Education. “So often they see still images that don’t convey the grandeur. Some of the sizes in space are not fathomable to middle-schoolers.”

Inside the planetarium, the students saw a projection of the earth’s revolution around the sun and discussed what causes differed seasons. They viewed the stars and constellations and saw up-close images of the moon and planets. They then zoomed even further out to see the countless galaxies in existence.

“We want to make the experience real,” Jackson said. “When you learn vocabulary and read a textbook, you can learn, but it is a lot more exciting to experience this.”