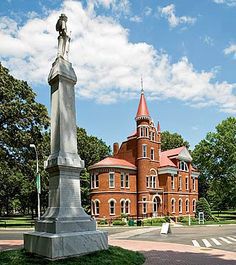 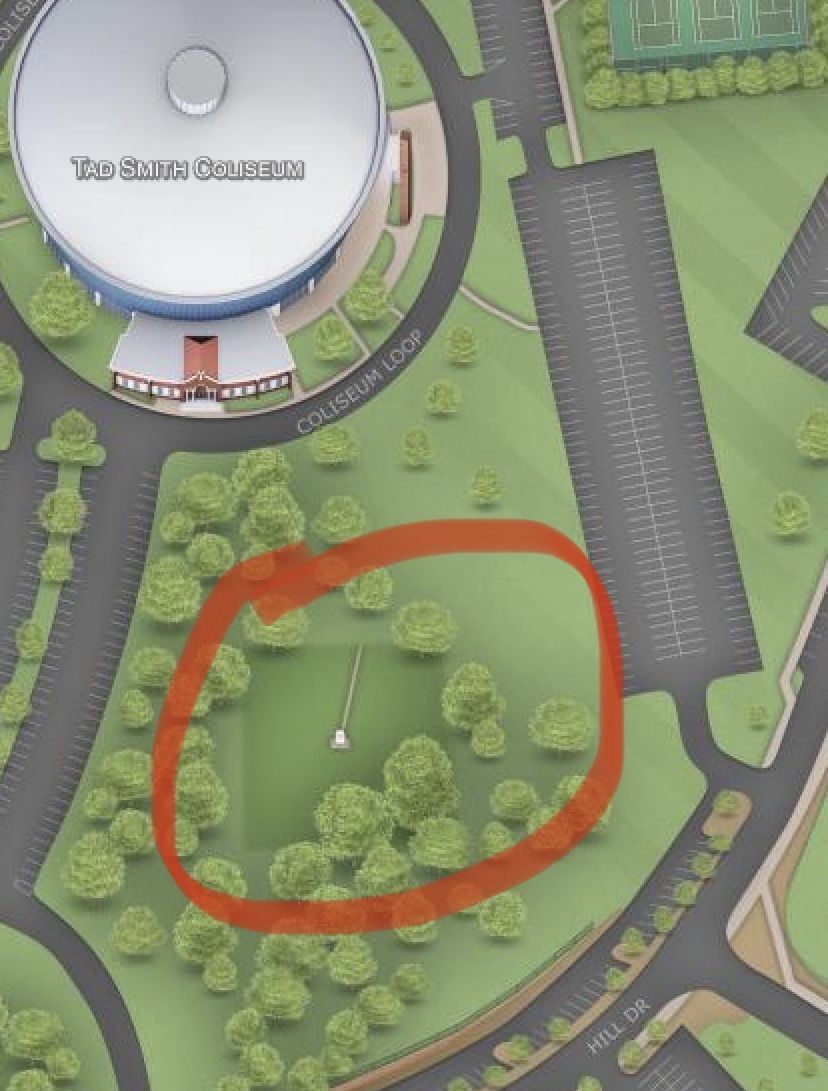 The Confederate cemetery near Tad Smith Coliseum. The university plans to move the Confederate monument from its current spot in the Lyceum Circle to the cemetery, pending approval from the state Institutions of Higher Learning. 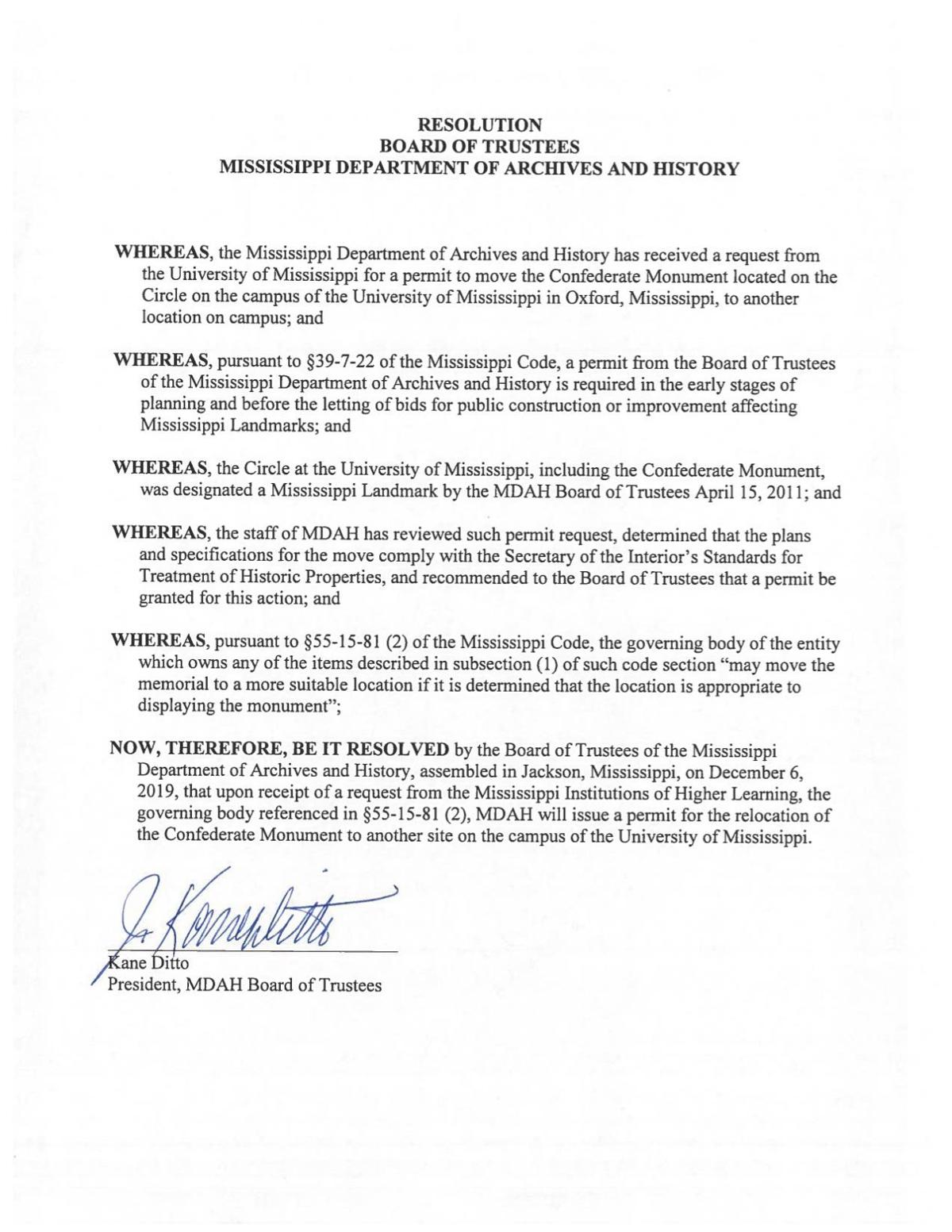 Mississippi Department of Archives and History resolution regarding the Dec. 5 vote on the University of Mississippi's notice of intent to move the Confederate monument from the Lyceum Circle to the Confederate cemetery.

JACKSON • The Board of Trustees for the Mississippi Department of Archives and History on Friday unanimously approved plans submitted by the University of Mississippi to relocate the Confederate monument that stands in the center of the Ole Miss campus.

The plans were initially sent to the board in August, which detailed the university’s intent to move the statue from the center of the campus, in the Circle, to the Confederate cemetery located near the Tad Smith Coliseum.

Kane Ditto, the president of the board of trustees, told members of the board that the board’s job was simply to evaluate the technical plans submitted to them to make sure the plans comply with federal and state guidelines and the board was not making the decision to move the statue.

Mark Keenum, the president of Mississippi State University, is a member of the board of trustees and said that he agreed with Ditto’s assessment of the situation.

“As I understand it, our goal basically is (to be) an agent on behalf of the Department of Interior as Archives and History to make sure that any monuments or memorials under their jurisdictions comply with federal guidelines,” Keenum said. “And, the staff have done their due diligence in working with the university to certify that their plans meets the federal guidelines. Any decision about the monument rests in the hands of the university’s governing board.”

UM Chancellor Glenn Boyce released a statement after the vote saying the university’s next step is to submit an agenda item to the state Institutions of Higher Learning to request approval to move forward with the relocation.

He stressed that MDAH approval was required before moving forward with the request to IHL but “with MDAH approval in hand, we will move forward.”

IHL said in a statement Friday afternoon that the UM chancellor determines which items will be submitted to the board for consideration on behalf of Ole Miss and that the board “has not been presented with a request from the Chancellor to relocate the Confederate monument located on the University of Mississippi campus.”

There is no December meeting scheduled for the IHL board as of Friday afternoon. The next meeting is set for Jan. 16, 2020.

Katie Blount, the director of the state agency, also told members of the board that she and the agency had received some “public comments” that all focused on the issue of relocating the statue, but none about the plans.

Blount also told the Daily Journal after the meeting that the agency will now send a copy of the resolution it passed for the state college board to make their decision regarding the monument.

The effort to relocate the campus monument was initially spearheaded by the university’s Associated Student Body last March when the organization unanimously passed a resolution calling for campus administrators to relocate the monument.

Subsequently, the remaining campus government organizations passed similar resolutions in the following weeks, and then-interim Chancellor Larry Sparks announced on March 21 that he agreed the monument should be relocated.

“Our campus constituents are in alignment, and we agree that the monument should be relocated to a more suitable location,” Sparks wrote in a statement on March.

President of the UM Black Student Union Arielle Hudson was one of six authors of the original ASB resolution proposing that the monument be moved.

“I think that we’re making significant progress and I’m glad that we’re almost at the last step of approval,” Hudson said of MDAH’s vote. “It’s a great feeling and I’m just glad that they voted unanimously on it.”

She hopes the IHL will see the benefit of moving the statue and “the impact that it can have on the university, especially in regards to our recruitment and retention rates of African American students.”

“So I am very hopeful and I think that students will continue to be a part of leading this movement and ensuring its completion,” Hudson said.

Leah Davis, another one of the six authors, said the unanimous decision validates the plan’s argument that moving the statue to the Confederate cemetery puts it into context.

“(It) is really the best decision ... and we challenge IHL to follow suit,” Davis said.

Davis said the next step for students is to address racial inequalities on campus and work with administrators to imagine the campus without the statue in its current spot. She also said campus organizations will now focus on efforts to secure IHL’s approval.

“It feels good just to be able to see progress being made,” Mayfield said. “But it won’t feel great until we’ve gone through the whole process and we get the job done.”

The statue served as a focal point for a neo-Confederate rally in February where protesters covered portions of the university and the community with protest signs and Confederate flags.

Danny McArthur contributed to this report.

Senator: This is probably painful for GOP senators

Joe Biden: We're not going to turn this into a farce