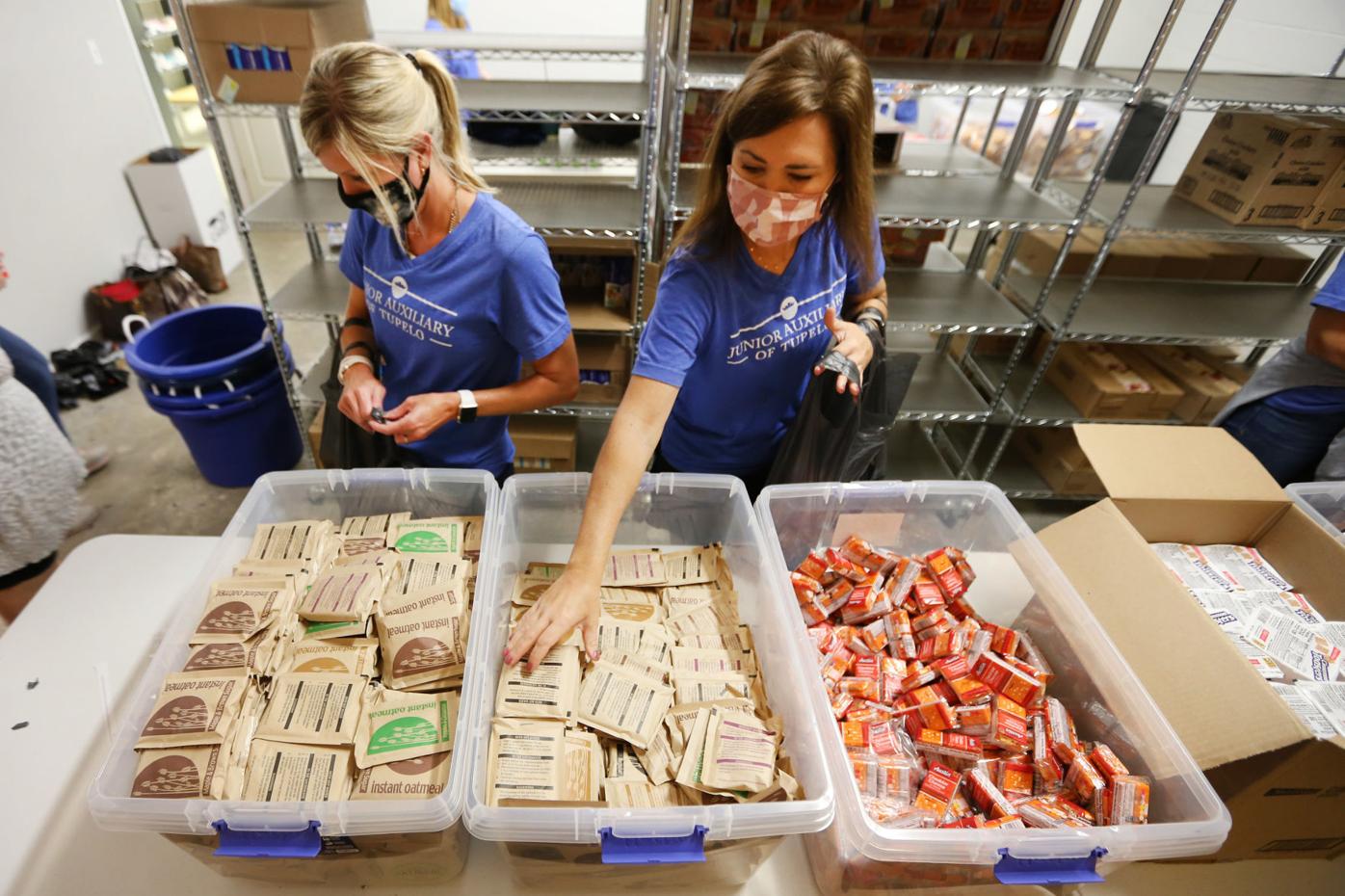 Jennifer McAdory, a Junior Auxiliary of Tupelo member, reaches for packs of oatmeal while preparing a bag of food for Silent Servings, Wednesday morning in Tupelo. As part of the program, bags of food are discretely given to students in need to ensure they have enough to eat. 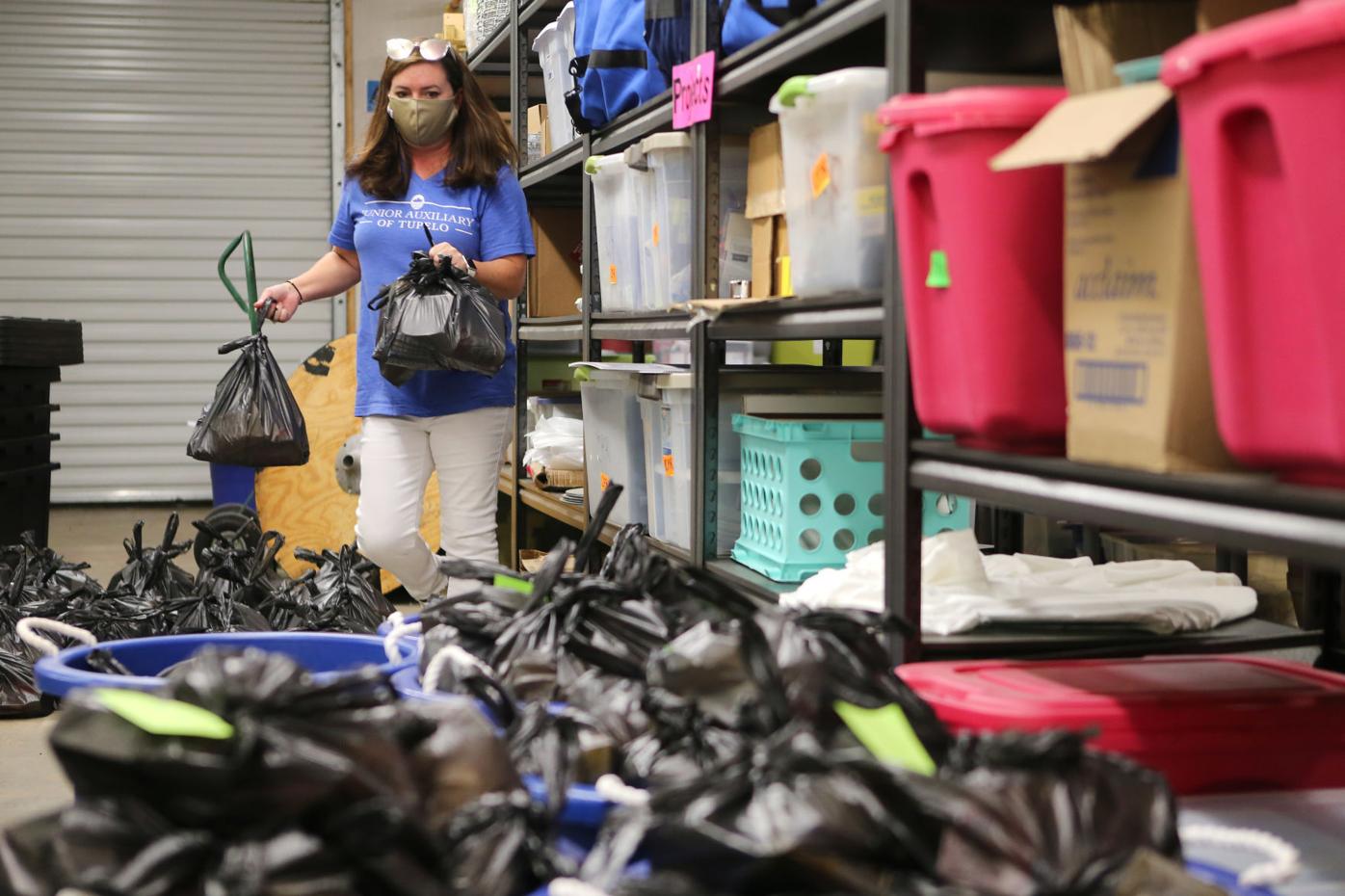 Holly Kulp, Silent Servings chairperson with Junior Auxiliary of Tupelo, organizes the Silent Servings Bags into the different school locations for the Tupelo District before delivery on Wednesday morning. 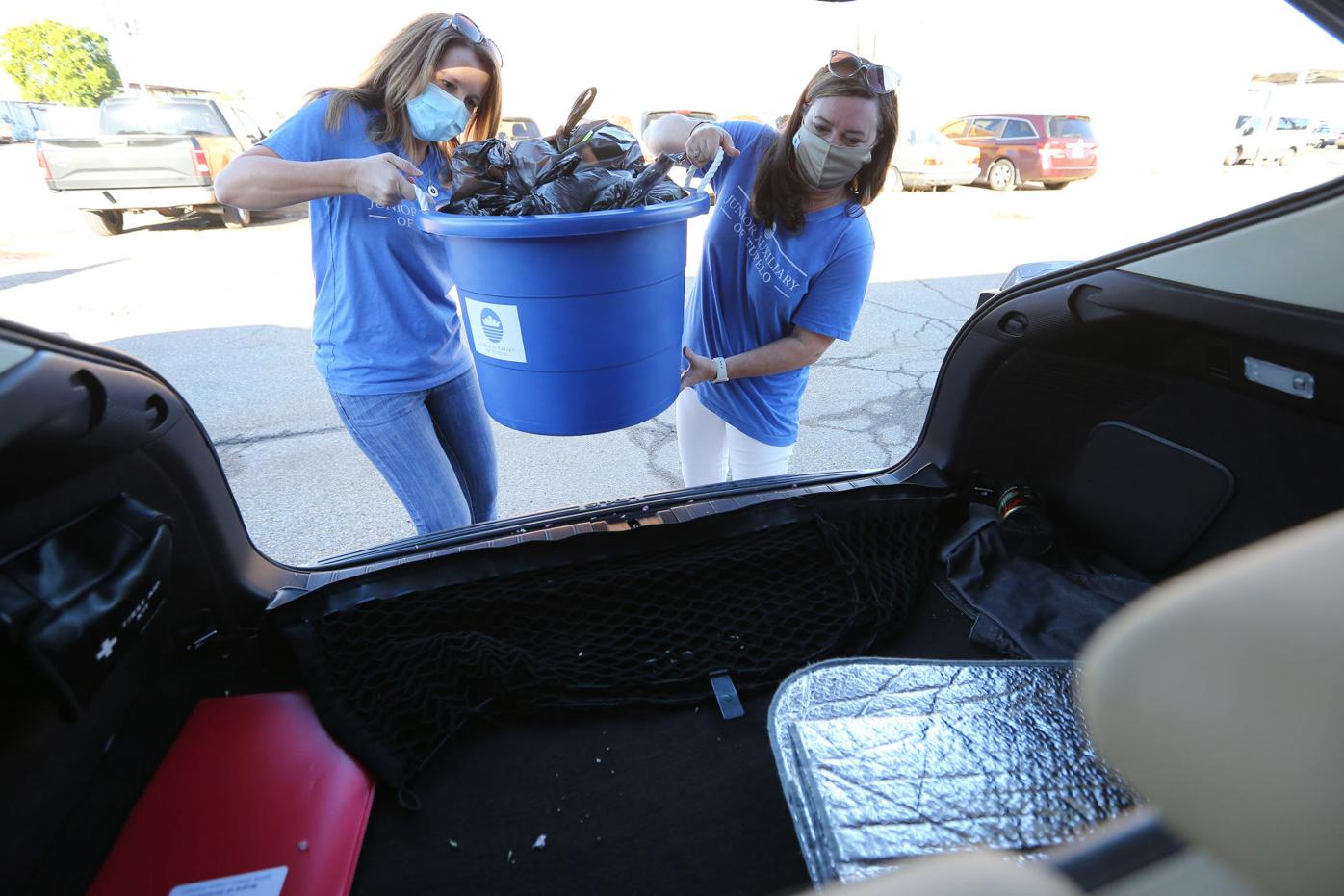 Junior Auxiliary of Tupelo members Tina Barber and Holly Kulp load a container filled with sacks for food into the back of Barber’s car. 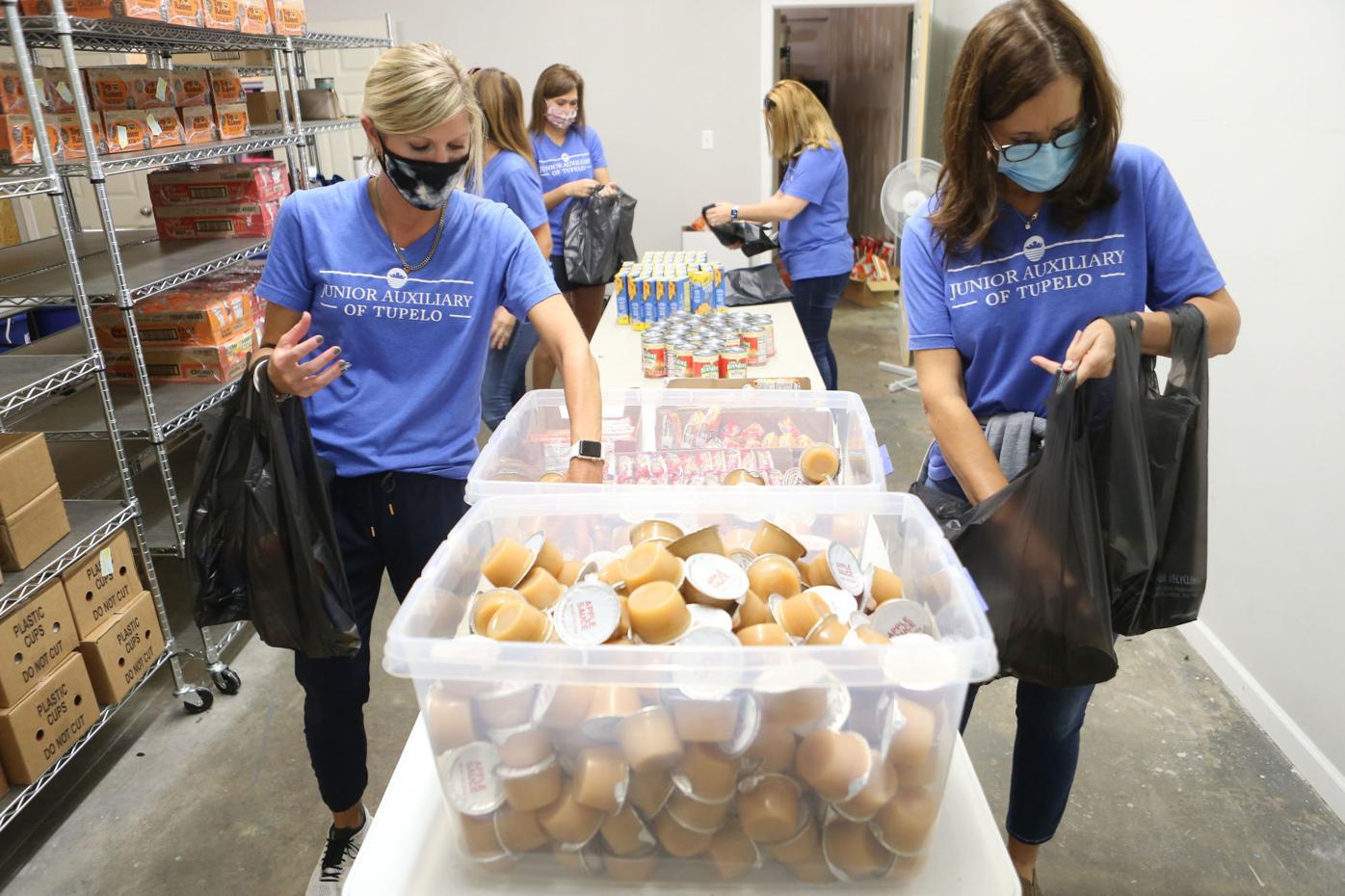 Emily Decker and Deanna Rutledge, Junior Auxiliary of Tupelo members, load food items into Silent Servings bags, Wednesday morning in Tupelo. The bags will be distributed to students across the Tupelo and Lee County area.

Jennifer McAdory, a Junior Auxiliary of Tupelo member, reaches for packs of oatmeal while preparing a bag of food for Silent Servings, Wednesday morning in Tupelo. As part of the program, bags of food are discretely given to students in need to ensure they have enough to eat.

Holly Kulp, Silent Servings chairperson with Junior Auxiliary of Tupelo, organizes the Silent Servings Bags into the different school locations for the Tupelo District before delivery on Wednesday morning.

Junior Auxiliary of Tupelo members Tina Barber and Holly Kulp load a container filled with sacks for food into the back of Barber’s car.

Emily Decker and Deanna Rutledge, Junior Auxiliary of Tupelo members, load food items into Silent Servings bags, Wednesday morning in Tupelo. The bags will be distributed to students across the Tupelo and Lee County area.

TUPELO • Among the growing list of complications for local schools during the COVID-19 pandemic is supporting a group of students that is often overlooked and underserved – the homeless.

There are 100 homeless students in the Tupelo Public School District as of Sept. 29, compared to 87 a year ago, according to TPSD’s homeless liaison Ruth Baker. She believes that number may actually be larger, with the number of homeless students underreported because of the virus.

“I think we are beginning to see more of the results of people being displaced, losing housing and that kind of stuff,” Baker said. “I know that I have more students than I normally do who are in motels, and that relates definitely to the virus, or the economy, because of the virus.”

That number might seem shocking, but it’s important to note that “homelessness,” as defined by the McKinney–Vento Homeless Assistance Act of 1987, which provides federal aid for homeless shelter programs, has a much broader meaning than most would assume.

“Most think of homeless people as living on the streets, in dark alleys or behind bushes. That is one kind of homelessness,” TPSD Superintendent Dr. Rob Picou said. “We define homeless children as those who do not have a steady place to live. Typically, homeless children bounce around between relatives and friends, a night on this couch, and night on that couch, maybe even on someone’s living room floor, possibly on the streets or in a car, never knowing when they will eat next or where they will sleep tonight.”

And the number of TPSD students classified as homeless won’t decrease throughout the year, even if they find a permanent residence, because once a child receives the classification, they maintain it all year.

“The purpose of that is to maintain school stability,” Baker said. “It ensures that people have the right to remain in their school of origin for the school year. They move repeatedly, and if they were forced to change schools several times, that is a factor that will impact their school success short-term and long-term. We want to make sure that children are enrolled and they are able to stay stable throughout the year.”

In order to further support Tupelo’s homeless students, the TPSD’s Board of Trustees approved the creation of a new McKinney-Vento student advisor position at its August board meeting and plans to fill the position by mid-October.

“We expect the number of homeless children to increase during these uncertain times with the pandemic and economy,” Picou said. “Homeless children are typically hungry and lonely. The McKinney-Vento advisor will help us provide support for these children.”

Jamie Vowell, counselor at Carver Elementary School, said the number of homeless students at her school has increased this year. As of Sept. 30, there were 13 students classified as homeless compared to eight at the end of September 2019.

Vowell has been a counselor at Carver Elementary School for five years and provides professional development to inform staff and raise awareness of homeless and at-risk students at the beginning of each school year. As part of her training, she explains the McKinney-Vento Act, students’ rights, how teachers can help, and warning signs to look for with students in class.

The COVID-19 pandemic and the economic downturn it caused have resulted in even more challenges for homeless students, but Baker’s office and school counselors across the district routinely link them with community organizations that provide resources.

The Junior Auxiliary of Tupelo is one such organization. Through various programs like Silent Servings and the Clothes Closet, they’re able to feed and clothe students in need.

The Silent Servings program began in 2014 and currently serves about 240 children, according to Silent Servings chairperson Holly Kulp, including some of the district’s homeless student population.

Every other week, she and nine other members meet early Wednesday morning to pack enough food to feed the students at several local schools – Verona Elementary in the Lee County School District and the Early Childhood Education Center, Carver Elementary, Lawhon Elementary and Lawndale Elementary – for the next two weeks.

Each bag contains a box of macaroni and cheese, a can of ravioli, a pack of ramen noodles, chocolate pudding, applesauce, two packs of cheese crackers, a pre-packaged cereal bowl and two packs of oatmeal.

The name Silent Servings derives from the confidentiality of the program. Bags of food are in students’ backpack discretely, so there’s no judgement or questioning from other students.

“If you can take that worry out of a child’s mind, then they can focus on the tasks they need to complete,” Kulp said. “When they’re not hungry or worried about where their next meal is coming from, then the teachers can do their jobs because they’re ready to learn. It promotes overall health and well-being in a child when you have better nutrition.”

The Junior Auxiliary also supports another program, the Clothes Closet, which is open Tuesday through Thursday from 9 a.m. to noon and serves around 350 kids per semester from Tupelo and Lee County schools.

Under the McKinney-Vento Act, grant funds cannot be used to purchase clothing for students outside of required school uniforms, so that’s where community partners come in.

“Counselors call us with kids who don’t have adequate clothing,” Junior Auxiliary President Gwen Cordell said. “I know a lot of the kids are homeless, but of course we don’t ask those questions. We simply focus on meeting their needs at that moment.”

Students in need can come by twice a year, in spring and fall, to receive three shirts, three pairs of pants, a pair of shoes, new socks, underwear and toiletries.

Cordell said the Clothes Closet has seen an increase in the number of students it has served since school started compared to last year.

“The needs are a bit greater than we’ve seen in the past,” she said. “Tupelo has always been a really generous community for supporting Junior Auxiliary, and we certainly appreciate our sponsors for letting our hands do the work of your heart.”

Services like free tutoring for TPSD’s homeless students are offered via programs like the Boys and Girls Club, and Baker said the district is also working to purchase MiFi wireless Internet hotspots with McKinney-Vento funds to issue to students who need them during the pandemic.

There are three main themes of McKinney-Vento, according to Baker: school stability, school access and support for academic success which have all been affected by the virus – some to a greater degree than others, but the district and its partners will continue to work together and make sure their students’ needs are met.

“The district as a whole is responsible and invested in making sure that our students, including these McKinney-Vento students, receive the support they need,” Baker said.

She hopes that more people will understand which children fit the McKinney-Vento classification and see that help is available.

“I think that a lot of times, it’s sort of a hidden problem,” Baker said. “I do think that because of the economic things that are going on right now it is quite likely that we will, as the year progresses, see more children falling into that category. It is important for families to understand that their children do have a right to assistance if they need it.”

The Mississippi State Department of Health on Monday reported 215 new cases of COVID-19 and no deaths related to the virus.

CDC official sounded alarm on Covid-19 months ago. She was silenced