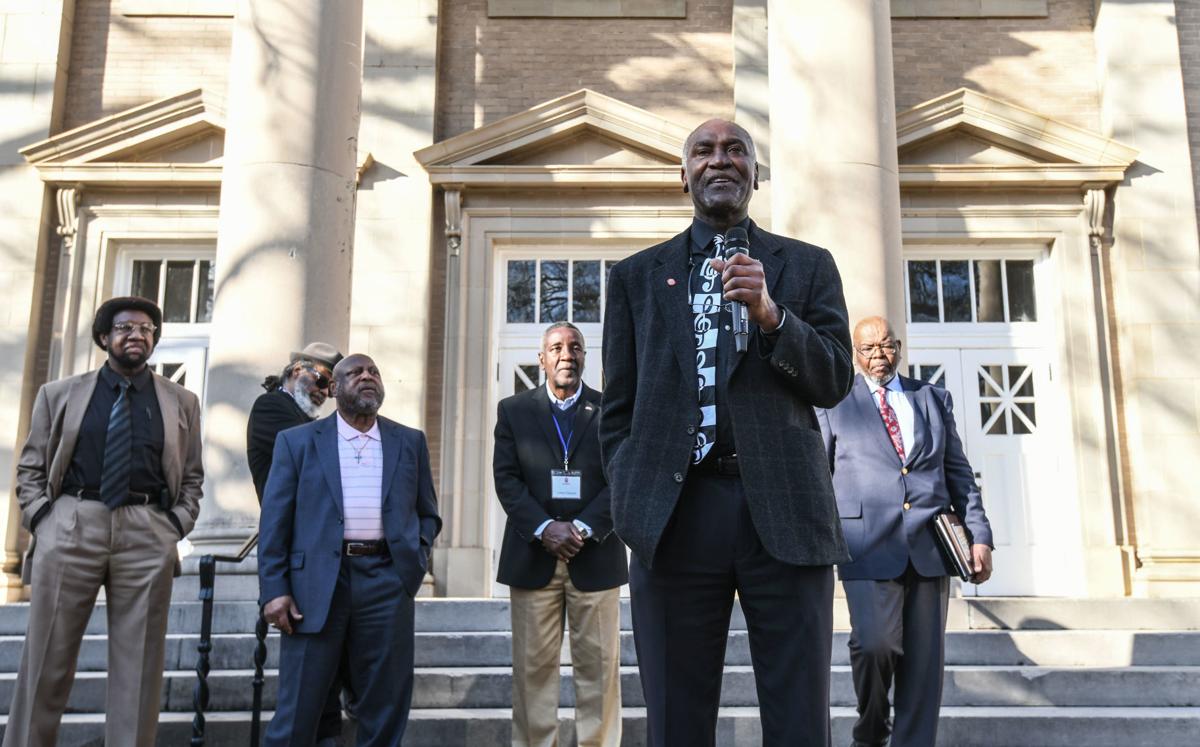 Don Cole speaks outside Fulton Chapel at the University of Mississippi in Oxford on Tuesday during a ceremony commemorating the 50th anniversary of the arrests of the ‘Ole Miss Eight’,who were expelled for protesting civil rights. 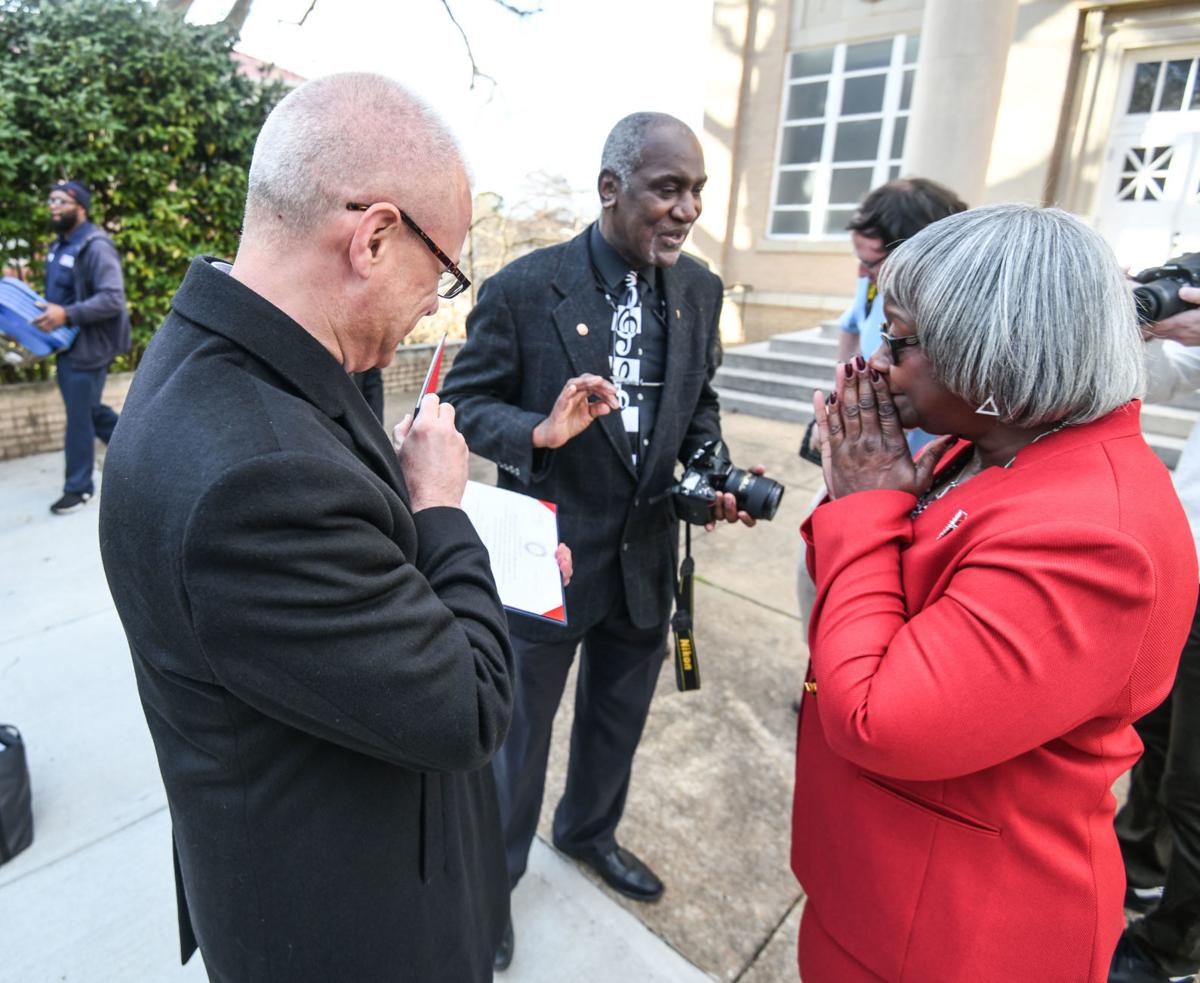 Linnie Willis, right, reacts to receiving her diploma 50 years after she earned her bachelor’s degree from provost Noel Wilkin outside of Fulton Chapel in Oxford on Tuesday. 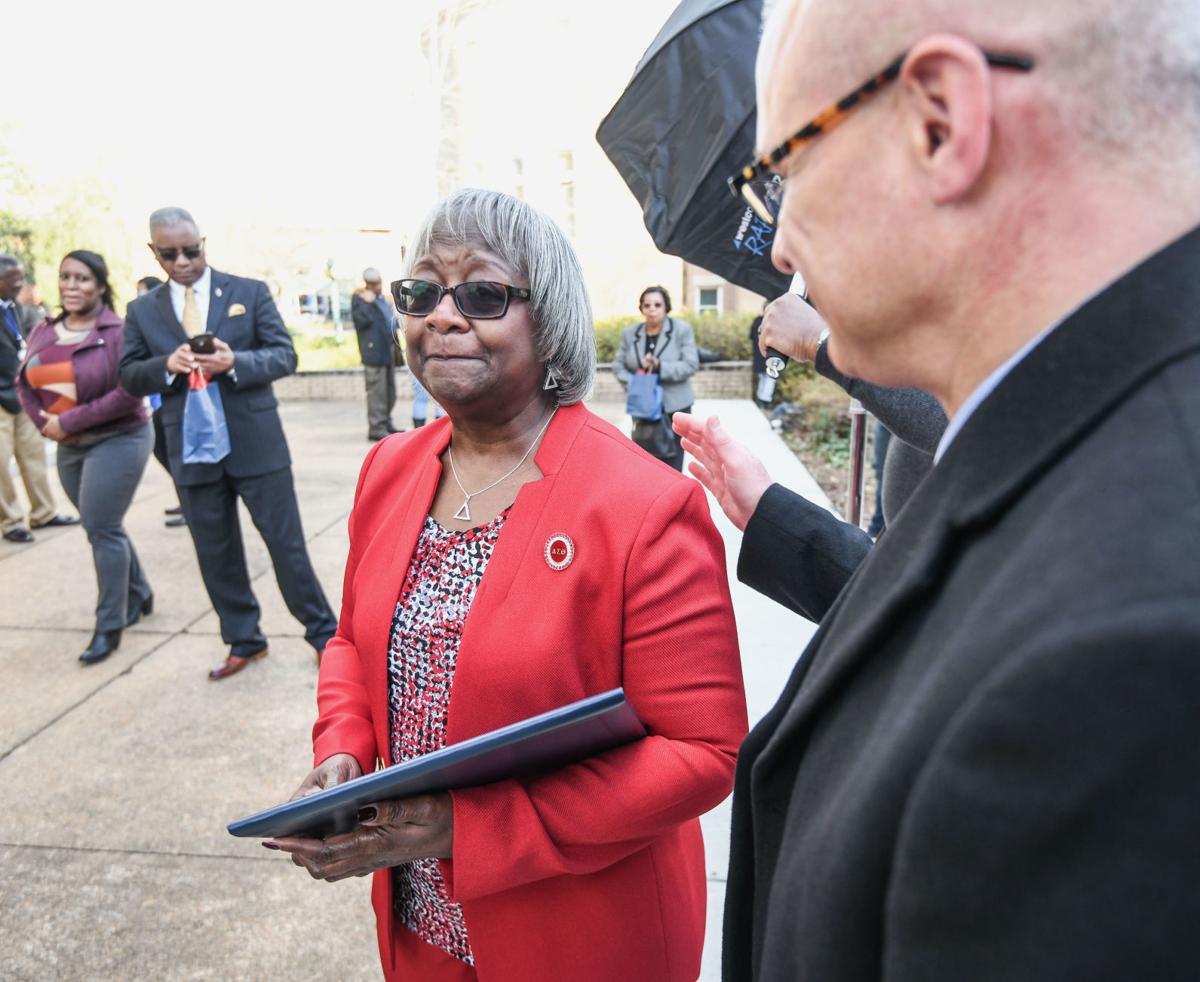 Linnie Willis, left, reacts to receiving her diploma from provost Noel Wilkins outside of Fulton Chapel in Oxford on Tuesday, 50 years after earning her degree from Ole Miss. 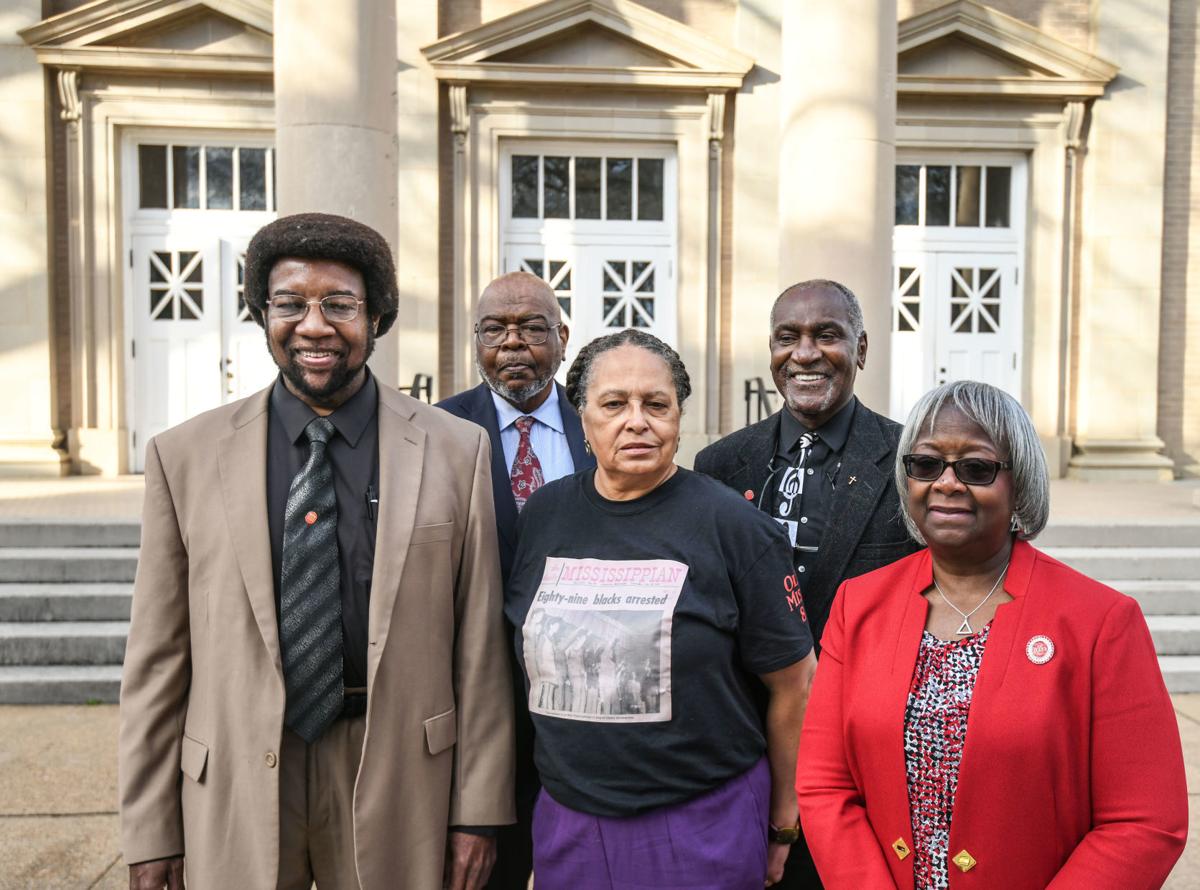 Don Cole speaks outside Fulton Chapel at the University of Mississippi in Oxford on Tuesday during a ceremony commemorating the 50th anniversary of the arrests of the ‘Ole Miss Eight’,who were expelled for protesting civil rights.

Linnie Willis, right, reacts to receiving her diploma 50 years after she earned her bachelor’s degree from provost Noel Wilkin outside of Fulton Chapel in Oxford on Tuesday.

Linnie Willis, left, reacts to receiving her diploma from provost Noel Wilkins outside of Fulton Chapel in Oxford on Tuesday, 50 years after earning her degree from Ole Miss.

OXFORD • Fifty years after almost 90 black student protestors were arrested on Feb. 25, 1970, for protesting in Fulton Chapel, their legacy and impact was discussed during two days of events at the University of Mississippi, including a commemorative ceremony at the site of the arrests at 3 p.m. Tuesday in front of Fulton Chapel.

The ceremony included several of the former student protestors, including five of the eight who were later expelled as a result of the protests, sharing the story of their struggles, their lives, and, for some, the hard reality of the harm they received from Ole Miss. Ole Miss faculty, staff and students, alongside alumni and community members, also attended.

James Donald, one of the student protestors alongside his brother and Black Power group leader John Donald, said it was “good to be home.” For Donald, protesting that evening was about leaving a legacy.

“We were not going to be denied our rights as citizens of Mississippi,” Donald said. “We weren’t great thinkers, we just intuitively knew something had to be done to make this promise that MLK had given us only a few years earlier.”

Others spoke about the shock they received about their treatment at Ole Miss, where they were called racial slurs, had hot water thrown on them, and were kept from being part of the university in the same way that their white counterparts were. Lawrence Anderson described it as not feeling human, as many classmates wouldn’t speak to or befriend them, and they often felt afraid on campus.

“I think I suppressed my memories about what happened ... I think I had trauma I didn’t realize I had until later, so it’s kind of hard to come back and revisit something like that,” Anderson said. “I think that night (of the Fulton Chapel protest) was a night of pushing back.”

Some, such as Emmitt Jones, admitted to feeling anger about the 1970 protests. He said when the group went into Fulton Chapel, it was a feeling of immense power and that they were speaking with one voice that was tired.

“I was 18. It wasn’t deep thought that brought me to Fulton Chapel, it was anger. I was angry about being ignored and not even seen by the university,” Jones said.

Jones said he almost considered not coming back when invited. He recalls how the international peace group Up With People was singing “What Color Is God’s Skin” when the protestors entered, and said it was the moment that made him leave religion.

The legacy of the 1970 Fulton Chapel protests stretched beyond anything the then-17 and up protestors imagined. At times, the ceremony felt more like a catching up between old friends, as several of the speakers shared jokes, stories about their time at Ole Miss and the kinship they all built as a result of fighting together against injustice.

For some of the Ole Miss Eight who were expelled, such as Kenneth Mayfield and Donald Cole, the love for Ole Miss remains despite it. Theron Evans said he managed to persevere despite being expelled, finding blessings with his wife, son, and long career in the medical field. For Henriesse Roberts, the ceremony represented the beginning of finding acknowledgement for the part they played, and described the experience as “relieving.”

“It gives moments where we can tell our story more easily, because it’s not hidden as it was before,” Roberts said.

Linnie Willis, one of the Ole Miss Eight, finally received her diploma after 50 years, having already earned a bachelor of arts of sociology and French prior to being expelled. There were tears as Provost Noel Wilkins handed Willis her diploma after the ceremony, and she was invited to also be honored at commencement, depending on her choice.

“The last two days have been an eye-opening experience. I never expected that I would be coming back here for any reason whatsoever,” Willis said. “... It’s the beginning of the healing process.”

Speakers also talked about the importance of continuing the work of making Ole Miss and the country a better place. While they noted Ole Miss had grown since their time attending, they encouraged students to take a stand and not be bystanders when injustice occurs.

“I hope and pray the young people here will pick up the flag and continue that struggle,” Cummings said.

Eubanks said organizers didn’t know Willis would receive her diploma when they first reached out, and seeing her receiving it was the most moving part of the ceremony. He also acknowledged the intense but conflicted love many, including himself, who was a student at the time of the protests, had for Ole Miss. He hopes this program can serve as a model for future work at the university.

“It’s wonderful to commemorate an event like this, but it’s even more important to remember why we’re doing this, why we’re remembering and trying to keep those ideas and the spirit of it continu(ing),” Eubanks said.

Following the ceremony was a Black History Month Keynote address at 6 p.m. in the Student Union by Dr. Yusef Salaam, one of the “Central Park Five,” a group of five young men of color who were tried and convicted after a woman was raped on April 19, 1989, while jogging in New York City’s Central Park. The group spent seven to 13 years in jail before DNA evidence proved their innocence.

Salaam spoke about the role the press played in pushing forward a certain narrative about black and brown people, and described it as a “whisper into the darkest enclaves of society” as the press published names, addresses and phone numbers and published editorials and ads calling for their deaths.

Salaam also spoke about the systematic nature of the prison industrial complex, and tied it to current times with the deaths of more than a dozen prisoners in Mississippi prisons over the last two months. He saw it as a call to reform the 13th amendment, stating it is not enough to just have a conversation about abolition or reform.

Ultimately, Salaam told attendees he viewed the story of the Central Park Five as a “love story between God and his people” to demonstrate the importance of comeback power.

“The Central Park jogger case is the story of a criminal system of injustice toppled, placed on its side, placed on trial, in order to produce a miracle in modern times,” Salaam said.

The 50th anniversary of the protests were also recognized with a film screening and panel discussion featuring five of the Ole Miss Eight and their attorney John Brittain on Feb. 24.

Oxford • The Feb. 25, 1970 protest at the University of Mississippi wasn’t supposed to be the signature protest for the Ole Miss Black Power m…

White woman apologizes for calling the cops on black man

Coronavirus numbers in Georgia one month after reopening