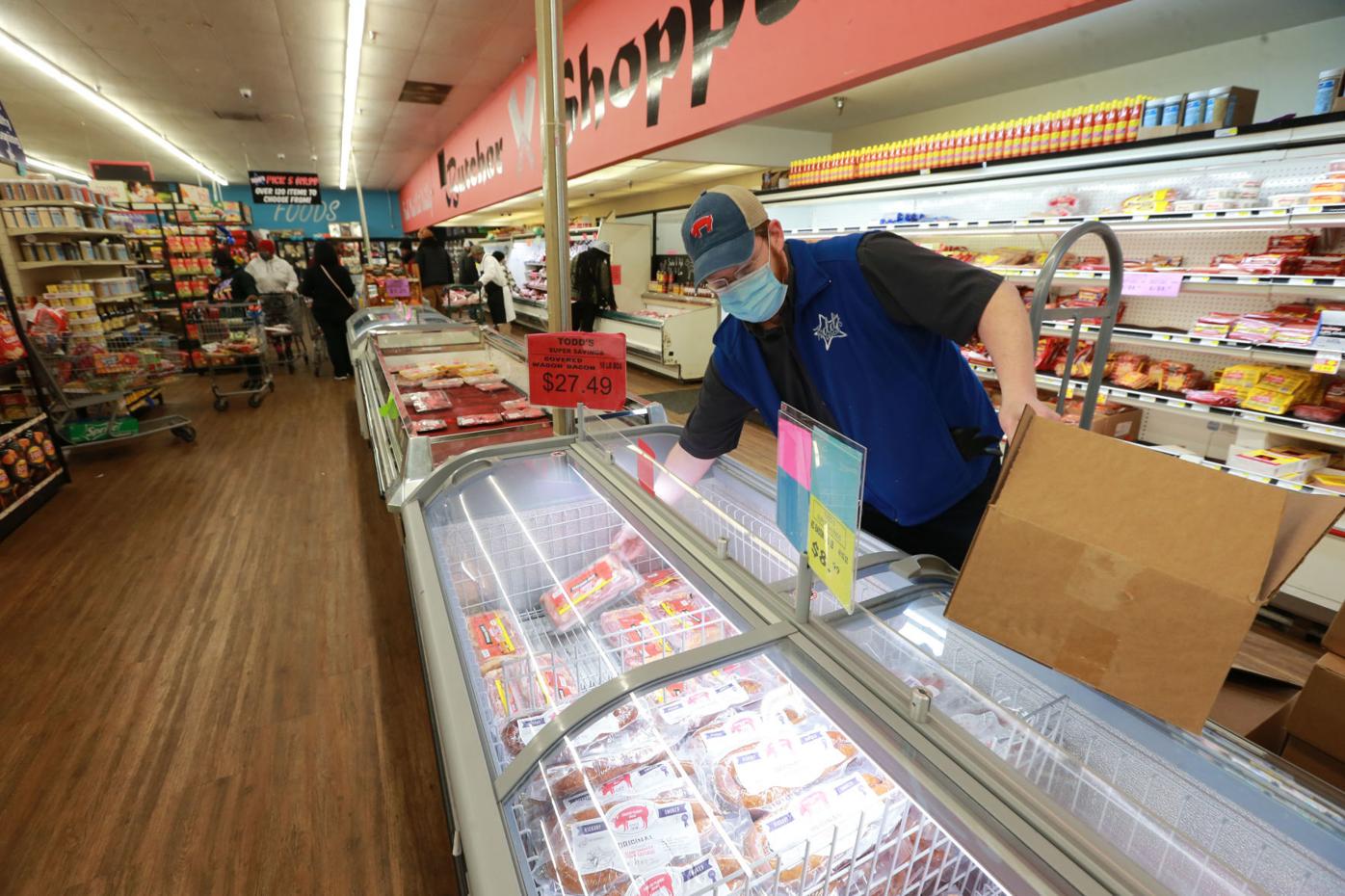 Todd’s Big Star manager Patrick Verner restocks a cooler with bacon as the grocery store does everything it can to keep its shelves filled. Despite having to cut hours, run with half its employees and delivery trucks being iced out, grocery stores throughout the region have been struggling to keep food on shelves. 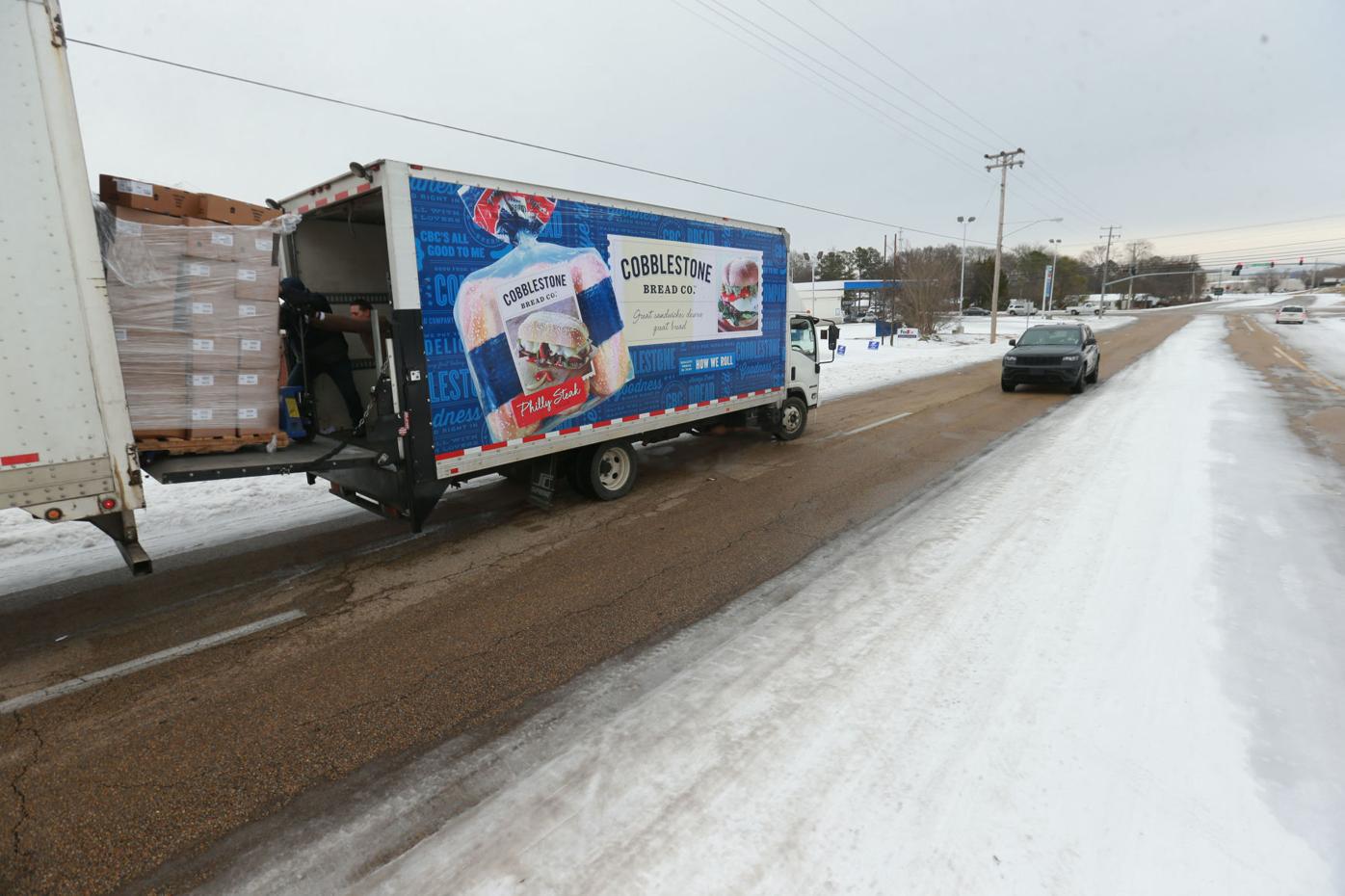 A tractor trailer offloads a supply of fresh bread to small truck as a motorist passes it along Eason Blvd near South Gloster Wednesday.

Todd’s Big Star manager Patrick Verner restocks a cooler with bacon as the grocery store does everything it can to keep its shelves filled. Despite having to cut hours, run with half its employees and delivery trucks being iced out, grocery stores throughout the region have been struggling to keep food on shelves.

A tractor trailer offloads a supply of fresh bread to small truck as a motorist passes it along Eason Blvd near South Gloster Wednesday.

TUPELO • Hours have been cut, some employees can’t get to work, and delivery trucks have been mostly iced out – but food has been flying off the shelves at local grocery stores all the same.

Need some milk and eggs? Forget about it.

“I am completely out of milk and eggs,” said Clay Knight, owner of Todd’s Big Star in Tupelo. “I was completely out of chips. We ran out of ground beef yesterday, but we ran to Guntown and got some from a local vendor.”

Knight has been keeping his store open from noon until 5 p.m. most days this week, and demand has been high.

“There was people coming to the door when we were there this morning, and the phone never stopped ringing,” Knight said. “People kept asking, ‘When are you opening?’”

Besides the staples that typically draw demand when foul weather looms, Knight has seen meats and sausages selling heavily, including canned meats and chili. Other store managers and owners in the region report heavy sales for frozen dinners, canned soups, crackers and chips.

Another “can-do” bestseller? Charcoal and propane.

“We’ve been so covered up when it comes to filling propane tanks, we’ve been taking turns,” said Dorsey Food Mart owner Tim Gillentine. “We’ve been out just briefly, but our provider has been good about getting to us quickly.”

Even with high demand, restocking the shelves is an uncertain proposition right now.

“We haven’t been able to get our trucks in since Saturday,” said Tim Weeks, general manager of Food Giant in Ripley. “The trucks can’t get out of Memphis and we do not know when they will run.”

Other grocery stores in the area reported hit-or-miss delivery issues. Knight got a bread truck on Wednesday and was hoping for another Thursday, so some trucks have made it through.

Other trucks have canceled. Most managers and owners are hoping a weekend thaw will allow them to restock depleted shelves.

But the truckers aren’t the only ones with difficulty getting to some local stores. Grocery store employees are facing the same treacherous road conditions as everyone else, and skeleton crews are what’s keeping many stores open.

“We’ve had a few employees who couldn’t make it but had some to actually manage to get here. That’s allowed us to actually open. We’re fortunate because most of the stores in town have been closed or running limited hours just like us,” said Nathan Moore, manager of Hometown Market in Nettleton.

In Tupelo, Knight said Todd’s Big Star has been running at less than half a full staff.

Food Giant in Ripley has seen only about 10% of its employees able to make their way to work.

But the effort is there, with some employees working longer hours and other carpooling.

“We’ve also been fortunate in that respect,” said Gillentine in Dorsey. “With some of our employees not being able to make it to work, others have pulled double shifts so that we could stay open.”

But despite the obstacles, a sense of obligation and purpose carries the day.

And it could always be worse. Gillentine well remembers the 1994 winter storm and its aftermath.

“We were without power for two weeks in ’94,” Gillentine said.

Live Updates: The latest on winter weather across Northeast Mississippi

Boehner: 'Republicans have to go back to being Republicans'