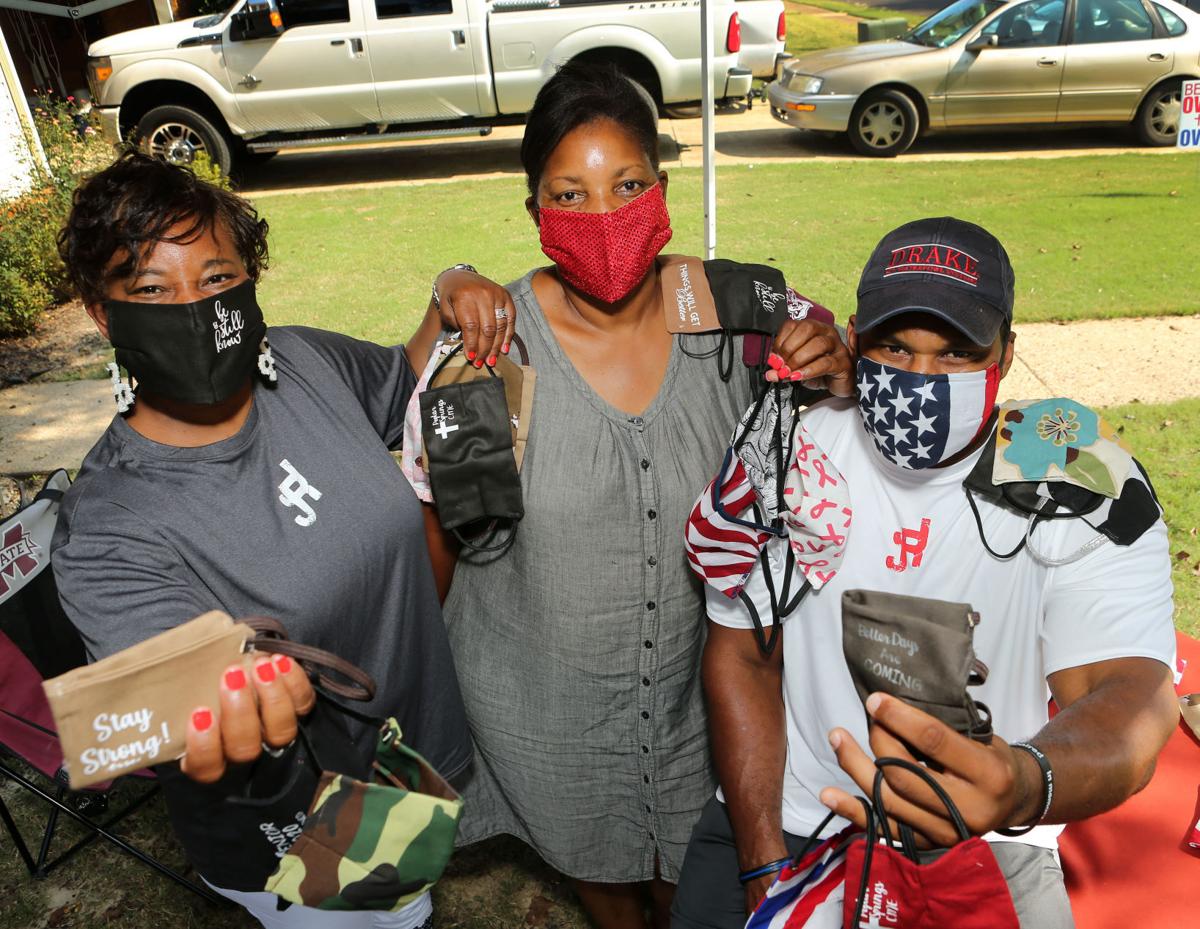 Marilyn Armstrong, Janice Fields and Jermandy Jackson, all of Tupelo, show off a small selection of the thousands of masks they have handcrafted since March. 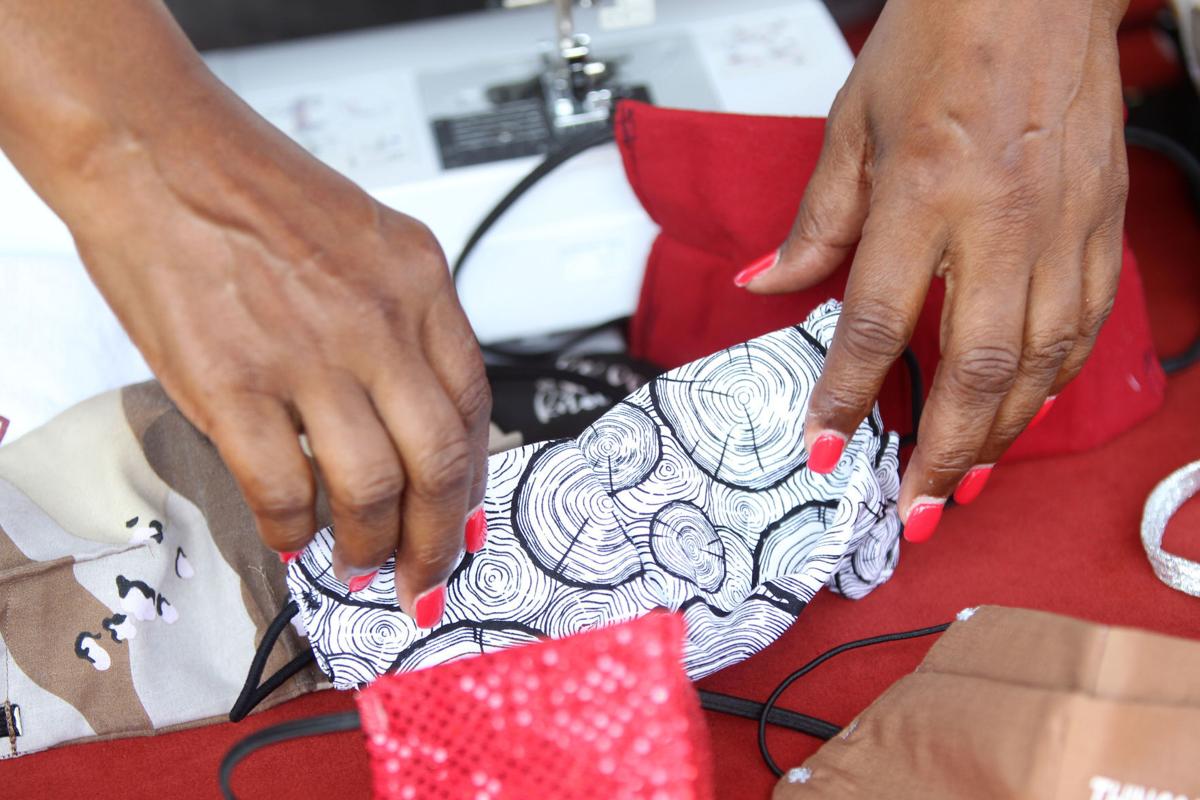 Janice Fields places masks on a table. She and her sister Marilyn Armstrong, along with help from their nephew Jermandy Jackson give their handcrafted masks to first responders across the area. 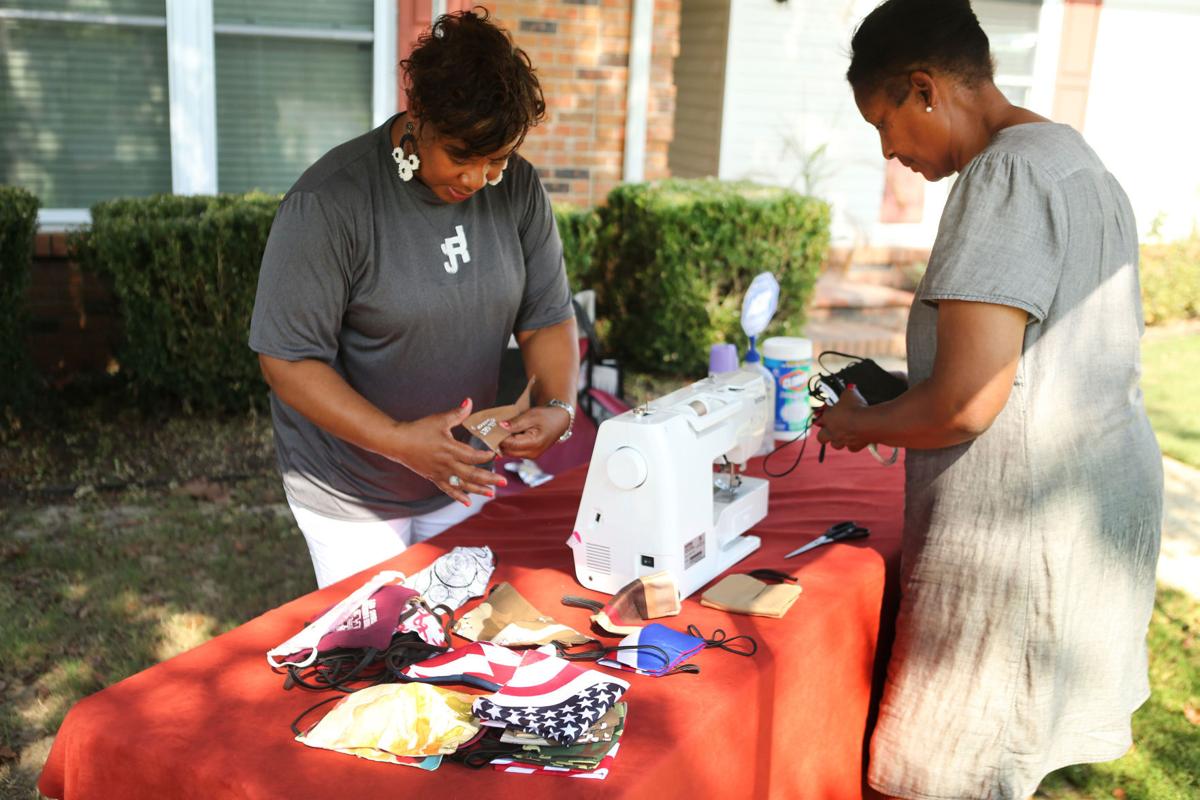 Sisters Marilyn Armstrong and Janice Fields sort through the masks they make and have been distributing to first responders across the area.

Marilyn Armstrong, Janice Fields and Jermandy Jackson, all of Tupelo, show off a small selection of the thousands of masks they have handcrafted since March.

Janice Fields places masks on a table. She and her sister Marilyn Armstrong, along with help from their nephew Jermandy Jackson give their handcrafted masks to first responders across the area.

Sisters Marilyn Armstrong and Janice Fields sort through the masks they make and have been distributing to first responders across the area.

TUPELO • Since early March, the Jackson-Fields family of Lee County has created and distributed thousands of masks.

Most of the masks they’ve created have been handed out for free to area first responders. Others have gone to senior citizens and veterans.

A simple idea from nephew Jermandy Jackson of a way to help others during the onset of the COVID-19 pandemic prompted seven sisters and one brother to join forces. The idea of making masks for first responders came from Jermandy Jackson, nephew of the masks creators, sisters Marilyn Armstrong and Janice Fields. To the family, handcrafting masks seemed like a simple way to show they cared.

“We would normally gather as a family three or four times a week, but it went to seven days a week when the pandemic started,” Fields said. “We all looked forward to it.”

“It brought us together and gave us something to do,” Armstrong said. “We had an assembly line going. We all had a part. Everyone had a job to do.”

In the early days of the project, most of the group was busy cutting out fabric patterns and elastic ear straps. Armstrong, the one sister who had a sewing machine – and knew how to use it – handled all the assembly.

They quickly realized they needed not only a second machine, but someone to learn how to use it.

“We all put our pennies together and bought another sewing machine,” Armstrong said. “Then we had to get someone to learn how to use it. It looks real easy, but there are eight or nine steps just for a simple mask.”

Fields and her daughter learned how to sew, and the family was soon making 100 or more masks during their lengthy daily sessions.

“My husband would call and ask when I was coming home,” Armstrong said. “I joked and said I had a part-time job. I wouldn’t get home until 9:30 at night. But we enjoyed it.”

Once they had a collection of masks ready, Jackson began reaching out to his contacts in the law enforcement community. The members of the Jackson-Fields family would travel to local police departments, drop off the masks and take pictures with the officers. They started close to home, on the south end of Lee County, and tried to hit each area law enforcement agency.

Now that Lee County is covered, the family is hoping to provide masks to first responders in surrounding counties.

In the meantime, the sisters (and their nephew) are putting masks in the hands (and on the faces) of members of other high-risk groups.

“Then we did veterans groups, nursing homes and fire departments,” Fields said. “We wanted to get the first responders first, but then went to people who fell into the at-risk categories who might have underlying conditions.”

“Anywhere I go, I have people ask how they can get one,” Armstrong said. “We get a number and either deliver them or mail them.”

The sisters don’t charge a penny for their masks, although they welcome donations. All donations go back into the project through the purchase of fabric, needles, thread and whatever other supplies are needed.

It hasn’t just been individuals making donations over the past few months. Area businesses have donated food and drinks to help their cause, and an Okolona furniture factory has donated fabric.

Because the initial idea was to provide masks to first responders, the first few (dozen … hundred) masks were adult-sized and featured manly or patriotic patterns. As they progressed, the sisters began to use colors and patterns that were more feminine, and even added a touch of bling on occasion.

Some masks now include Bible verses or inspirational sayings. The sisters have also started making smaller masks tailored for children heading back to school.

“We have patterns just for children, based on their age,” Fields said.