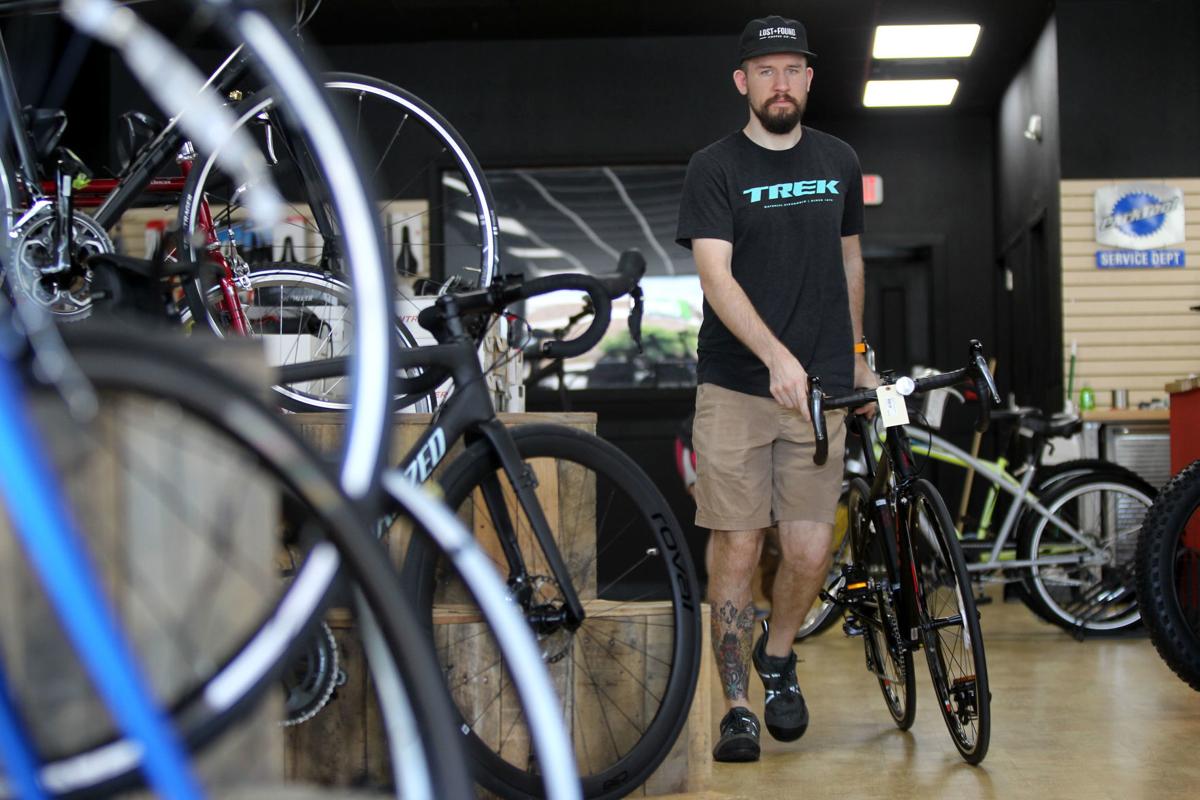 Matthew Knight, store manager at Trails & Treads in Tupelo, rolls a new bicycle onto the sales floor on Thursday morning. The coronavirus has caused a spike in bike sales and repairs as people have been looking to stay active while staying at home. 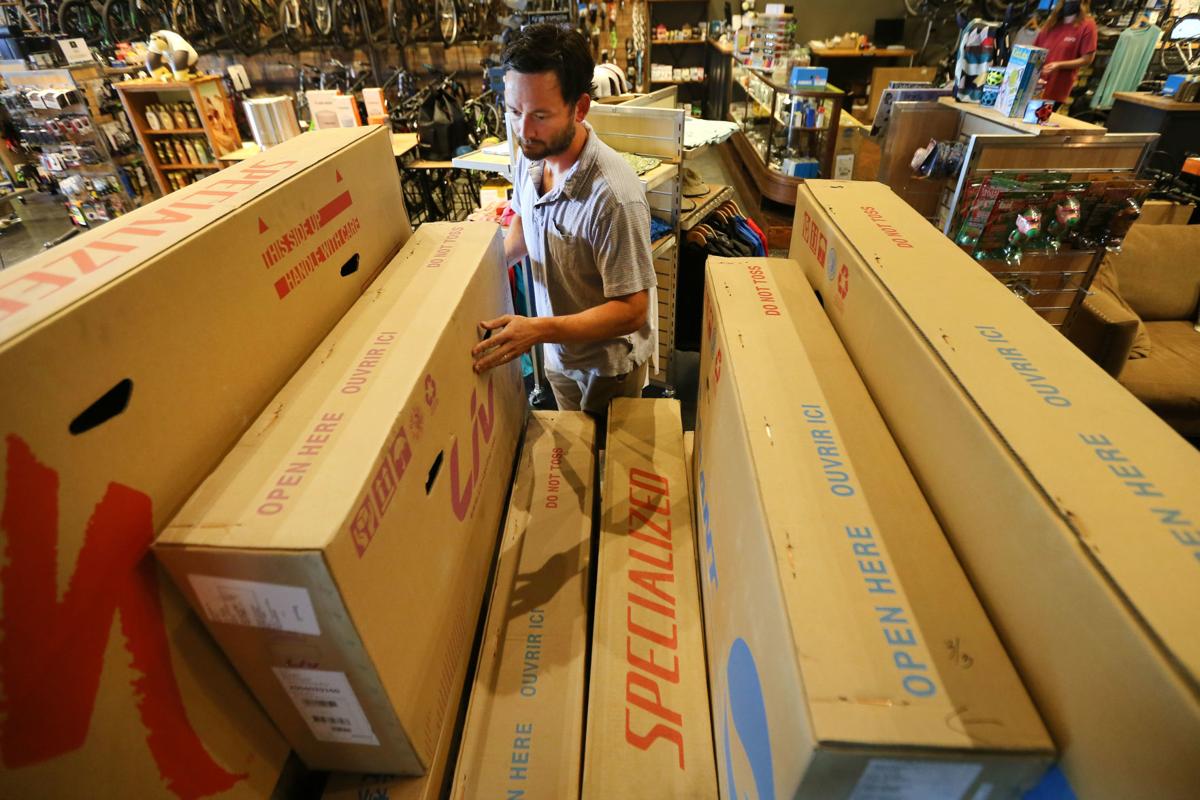 Claude Clayton, owner and manager of Core Cycle & Outdoor, sorts through some of the new inventory of bikes he has sitting on his sales floor on Thursday. A lack of new inventory has also been caused by manufacturing plants being closed overseas due to the pandemic. 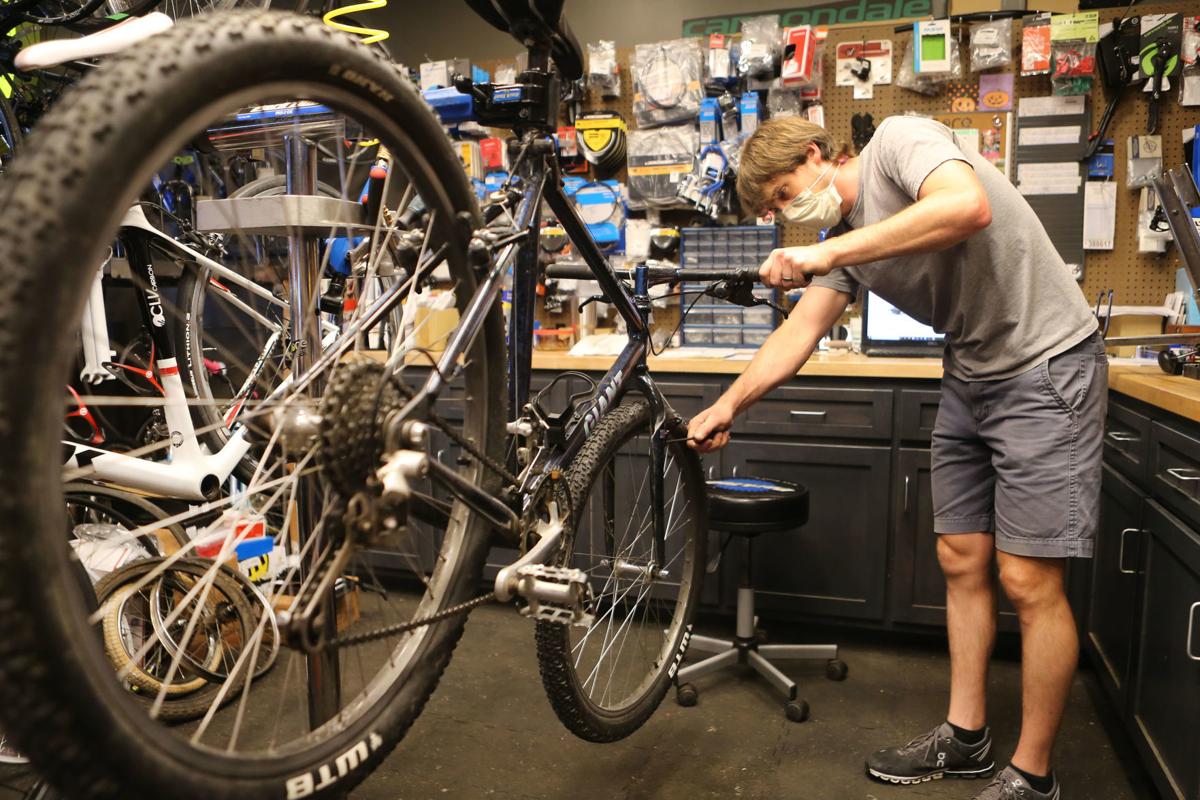 Eric Pettit, bicycle mechanic and assembler at Core Cycle & Outdoor, services a customers bike in his work area on Thursday afternoon in Tupelo. 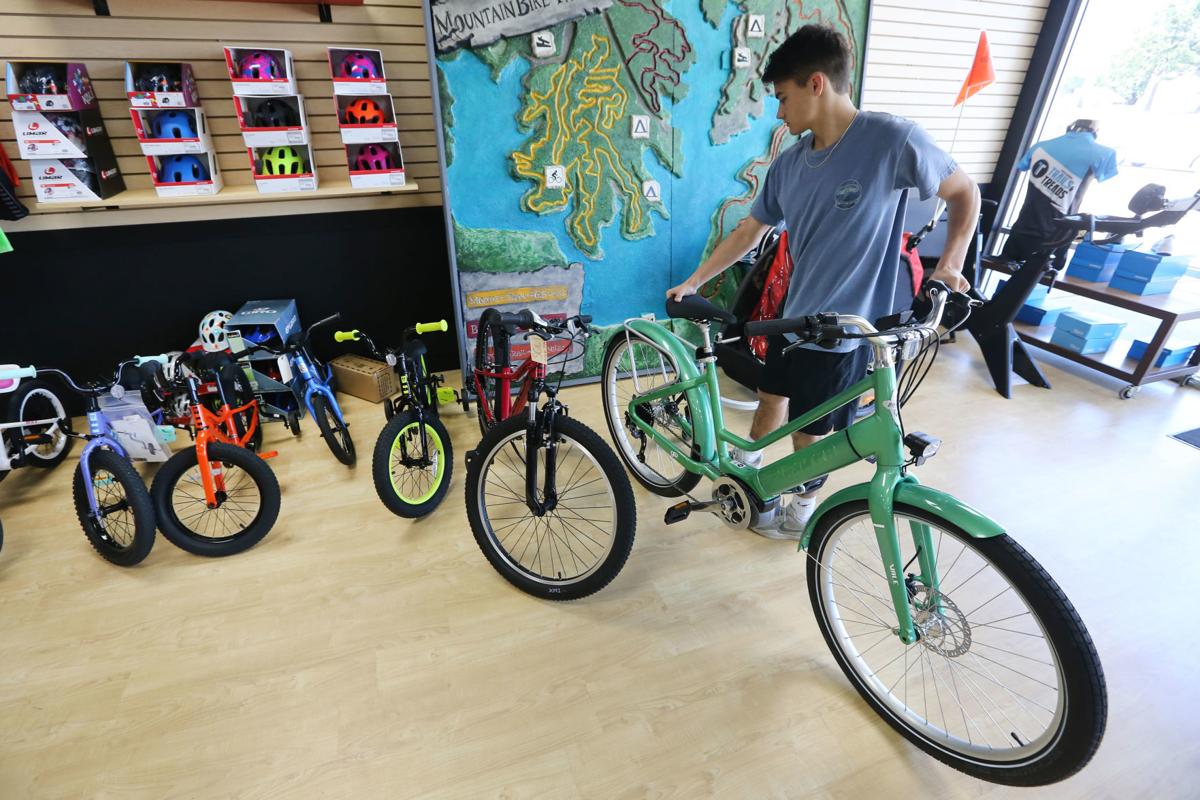 Brady Butler with Trails & Treads moves new bicycles around on the sales floor Thursday in Tupelo.

Matthew Knight, store manager at Trails & Treads in Tupelo, rolls a new bicycle onto the sales floor on Thursday morning. The coronavirus has caused a spike in bike sales and repairs as people have been looking to stay active while staying at home.

Claude Clayton, owner and manager of Core Cycle & Outdoor, sorts through some of the new inventory of bikes he has sitting on his sales floor on Thursday. A lack of new inventory has also been caused by manufacturing plants being closed overseas due to the pandemic.

Eric Pettit, bicycle mechanic and assembler at Core Cycle & Outdoor, services a customers bike in his work area on Thursday afternoon in Tupelo.

Brady Butler with Trails & Treads moves new bicycles around on the sales floor Thursday in Tupelo.

TUPELO • Usually, soon-to-be 11-year-old John Coley Elliott is playing travel baseball this time of year. But with the coronavirus disrupting plans from businesses to ball teams, young Elliott rediscovered the joys of riding a bicycle.

On Wednesday, he and his mom, Emily, picked up a brand new bike from Core Cycling and Outdoor.

“He was looking for a bike that was neighborhood-worthy and something for the trails behind he house,” said Emily. “He’s got a BMX bike now, but wanted to upgrade and get something he could grow into ... something he can use for several years and not have to buy every year.”

John Coley loved the bike, minus the bell, and both were out the door of the store in minutes.

As for Emily and husband John Mark – the couple own Lost Pizza in Tupelo and Starkville – they haven’t gotten into the bike craze. Yet.

“We haven’t gotten there but staying at home all this time? I’m going to have to say yes, I will,” she said with a laugh.

If so, she’ll be joining a growing populace that’s rediscovered that riding and traveling on two wheels is as popular as ever.

The problem is, finding a bike is getting more difficult. From bicycle shops to big box stores, bicycles for men, women and children are slim in quantity.

First, manufacturers shut down. Then there was a big spike in demand as cities and towns shut down. As cars and buses were taken off the roads, more people hopped on bikes.

For those in rural communities, bike riding didn’t become a commuting alternative – people just wanted something to do outside since they had to stay inside so much.

“The bike business has just picked up tremendously,” said Terry Butler, owner of Trails and Treads. “The families are getting to be more like families. They want to spend more time together, and now you have whole families coming in to buy bicycles.”

Bicycles selling for under $1,000 are the most popular – and the hardest to come by, both Core and Trails and Treads owners said.

But why is there such a shortage, even as the spring is most often the season when bicycles are sold the most, and manufacturers and retailers are expecting a rush?

COVID-19 is the culprit.

Like so many other businesses and industries, the pandemic also forced the shutdown of many factories. While many are back up and running, there’s a backlog of demand that has to be met.

“It’s strange times, obviously,” said Core owner/manager Claude Clayton. “I definitely didn’t anticipate how much of a hit bikes were going to be during the shutdown and social distancing efforts.”

Most bicycles are made overseas. China, Taiwan, India, the EU and Japan churn out 87% of global production. And even for domestic bike makers, some key components must be imported. So while they were shut down, they couldn’t make any more bikes either.

Those numbers put a squeeze on the supply, and nobody knows for sure when and if manufacturers will be able to catch up.

“See here,” said Clayton, perusing a bicycle maker’s list from which he orders. “Look at all the zero’s for quantity. Usually there’s several hundred of each.”

And while new bikes have been hot, so has bike repair.

“We have people bringing in bikes that have been sitting in barns for years,” said Butler of Trails and Treads. “We had one lady who brought in a bike that’s been in a shed since 1996.”

Butler then rolled out a vintage Western Flyer bike from the ‘60s. The company made bicycles from 1931 until it went out of business in 1998.

“It’s like people didn’t realize how much technology had taken over,” Butler said. “Then they got sent home with their kids for weeks at a time and everybody’s wondering, ‘what are we going to do now?’ and picked up bicycling.”’

Both of the Tupelo bicycle shops are filled with bikes already repaired or waiting to repaired.

Core had closed in mid-March as the pandemic started to spread, and Clayton essentially let everyone off with pay. But he came to the store daily to do repairs and some drop-offs and pickups.

“It just kind of snuck up on us and we ended up having a huge backlog of repairs, and then you had people calling asking for new bikes,” he said. “It was just me for about 2 1/2 weeks and we’ve slowly added back.”

Now fully reopened and up to four people working on repairs, Core is full of bikes. It’s just that most of them aren’t for sale.

“We have more bikes in here than we’ve ever had before, but our inventory is the lowest it’s ever been,” he said.

The situation isn’t that bicycles are not being made and aren’t being delivered. Manufacturers have to catch up, and are doing the best they can given the circumstances. June and July are hot-selling opportunities, then Christmas is just around the corner.

By the end of April, many stores and distributors had sold out of low-end consumer bikes.

“I think for this period compared to the same period last year, we’ve sold 50% more,” Clayton said. “It’s been significant.”

Butler opened Trails and Treads at its new location on the Market Center next to Shoe Carnival on April 1, in the midst of the pandemic.

Needless to say, business has been booming.

“We’re fortunate we’re still getting two or three deliveries a week, so we’re trying to stay stocked up,” Butler said.

“We’re kind of in a perfect storm,” Clayton said. “Taiwan and China, where most of the big brand bikes happen, were all shut down before we were, and paired with a limited supply and this bike boom in the U.S., and you have that perfect storm. Luckily, we usually have an inventory of 150-200 bikes, and we’ve been able to pull from that. But we’ve been going through every supplier to see what’s available just so we can have something to sell.”