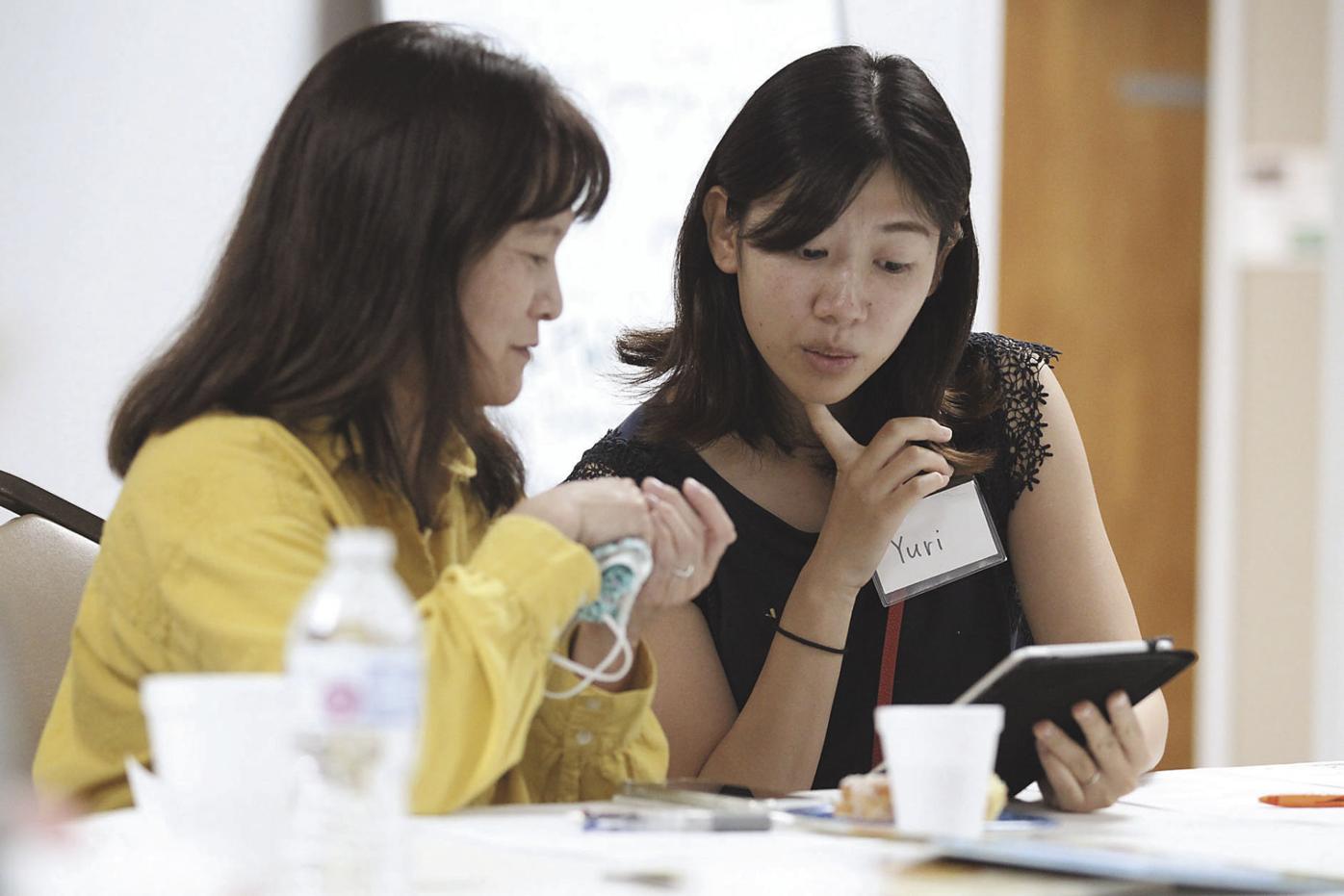 Shiho Seki, left, and Yuri Wakamori look at pictures of the fall season as they take part in an ESL class at First Baptist Church in Tupelo. While the class is open to all cultures and has students from a variety of backgrounds, they received an influx of Japanese students following the announcement of Toyota Mississippi opening a Blue Springs facility in 2007 and beginning production in 2011. 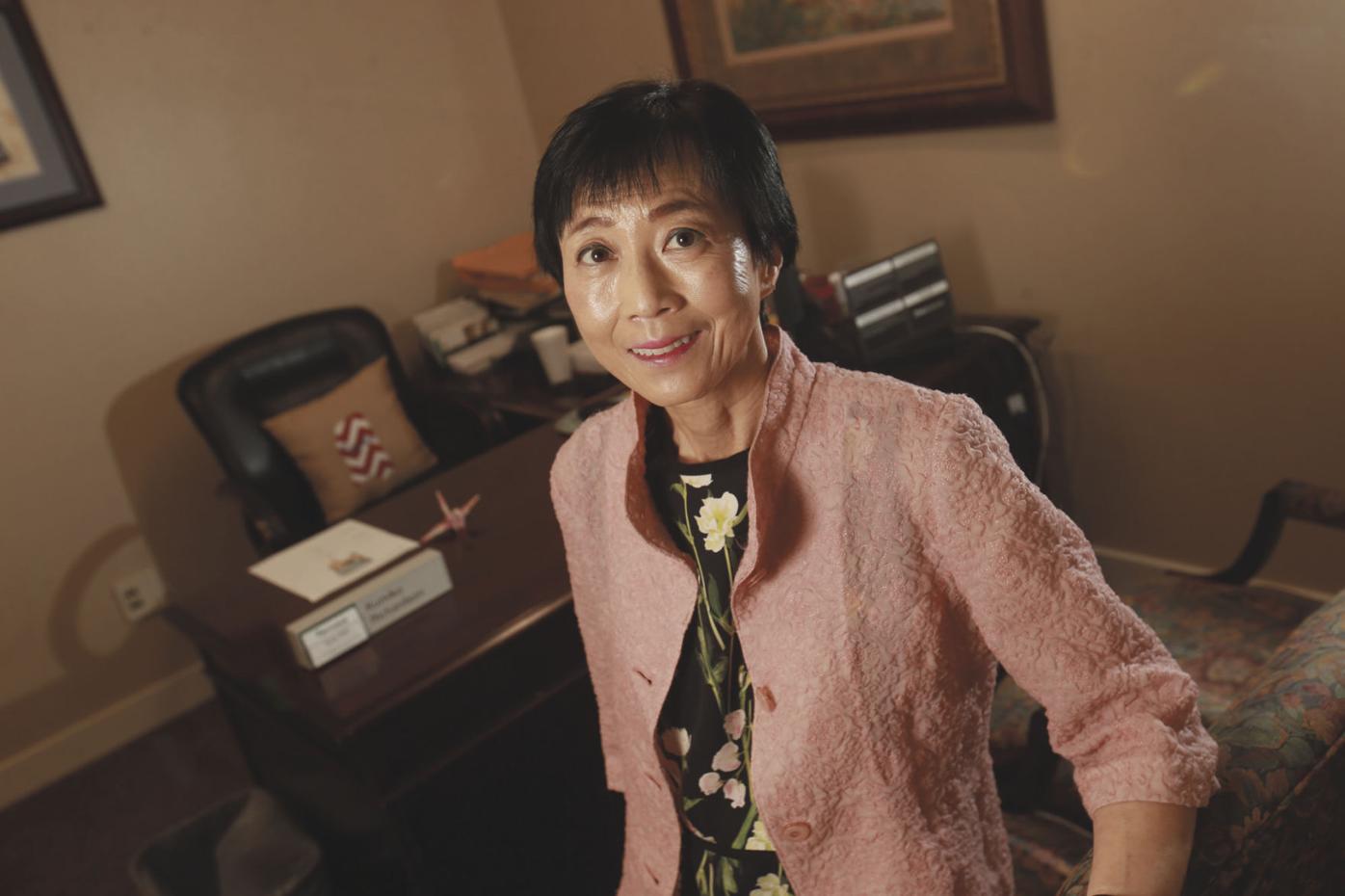 Kumi Richardson is Japanese liaison and premier banking specialist/personal banker at BancorpSouth. Since entering her role in 2008, she's watched as the Japanese community in Northeast Mississippi has developed and grown, and helped several families navigate their own adjustment to southern culture. 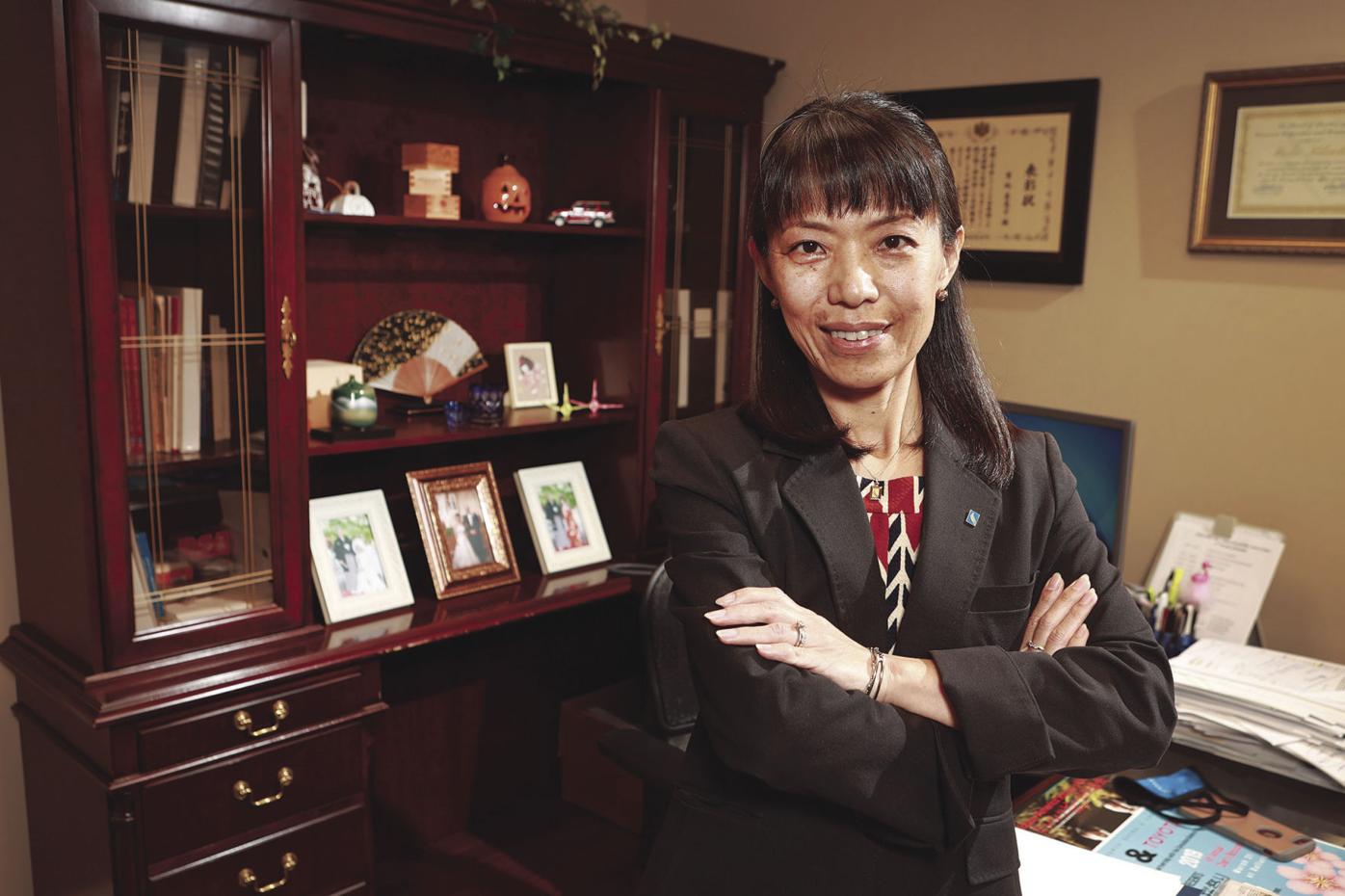 Mieko Kikuchi has served as Renasant Bank's relationship manager and Japanese liaison since 2008 and is now Assistant Vice President. She's helped lead the growth of Japanese cultural events in Northeast Mississippi through her roles as a member of the Japan-America Society of Mississippi (JASMIS) board of directors, founding member of the Cherry Blossom Festival, board member for the Gumtree Museum of Art and North Mississippi Symphony Orchestra and involvement with the Tupelo Suzuki Association. 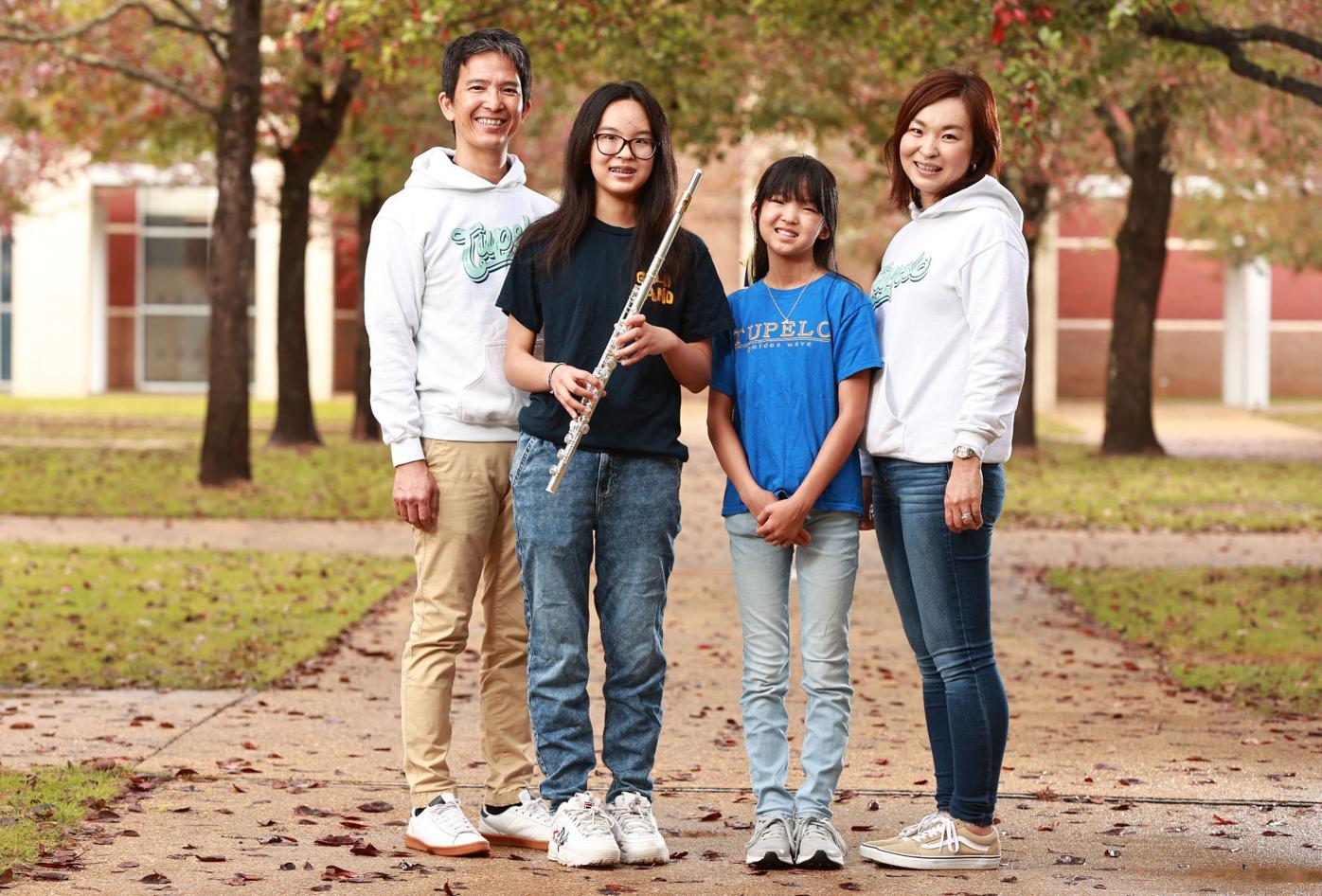 Mieko Kikuchi remembers what it was like coming to the United States from Japan.

Kikuchi, Renasant’s Assistant Vice President and Japanese liaison and member of Japan-America Society of Mississippi’s board of directors, said she was an active member of her community when she lived in Japan, but she needed help from her friends when she moved to the US.

Renasant hired Kikuchi, a University of Southern Mississippi graduate and aspiring southern belle, as their Japanese liaison following the 2007 announcement of Toyota’s plans to construct a plant in Blue Springs. Much more than banking, her role is help Japanese families adjust to their new southern lives, professionally and socially.

She acts as a bridge — one of increasing importance in the past decade — between the cultures of Northeast Mississippi and its growing Japanese community .

Census data show Lee County’s Asian population having increased by nearly 80% since 2010. In Union County, that growth is over 150%, and in Lafayette, it’s just under 70%. Much of that can be attributed to a surge in the Japanese community over the past decade.

Kumi Richardson serves as the Japanese liaison for BancorpSouth and, like Kikuchi, was hired in the wake of Toyota’s arrival in the area. She said the arrival of a prominent Japanese company in Northeast Mississippi opened the doors to a community that likely wouldn’t have come to the area otherwise.

For over a decade, Toyota Mississippi has tried to integrate Japanese culture into the local community, said Emily Lauder, vice president of administration for Toyota Mississippi. That started with supporting the local chapter of JASMIS and the Japanese Supplementary School. In 2013, they partnered with the Gumtree Museum of Art to host Cultural Connections, which presented Japanese creators, art lectures and workshops, and an exhibit of Japanese art.

“Tupelo’s becoming somewhat of a melting pot because of Toyota and because of the suppliers and other businesses and industries that are located here,” said Emily Wilemon-Holland, corporate communications analyst at Toyota North America. “It’s kind of just continued, and built, and it’s growing.”

A crescendo of cultural touchstones followed Toyota’s arrival in Northeast Mississippi, including a strengthened Japanese involvement in the annual Celebration of Cultures; growth in cultural awareness in local schools; greater inclusion of Japanese art, music and food in the region; the development of multicultural groups such as Cooking as a First Language; and increased presence as students at First Baptist Church of Tupelo’s English as a Second Language (ESL) program.

For Toyota’s Japanese staff, these events and programs are an important part of feeling accepted by the local community as well as connected to their cultural heritage. Many of the Japanese workers come to Blue Springs temporarily, typically two to three years, before returning to Japan.

Shoji Asai, whose position is group manager, paint, has been with Toyota Mississippi since February 2020. Originally from Nagoya, he joined Toyota 20 years ago and is enjoying life in Mississippi with his wife and three kids.

However, the initial transition was a struggle. Asai’s family had just arrived in Northeast Mississippi when the growing pandemic forced schools to shut down. They didn’t yet have a relationship with his children’s school, and because his children couldn’t speak English well, Asai found himself playing the role of language teacher while also helping them with their lessons.

“Our English sessions are kind of fighting, honestly,” Asai said with a laugh. “That was not so easy, but at that time, I’m using cartoons to teach English to the kids, through TV programs.”

Asai got creative, using his third grade daughter’s homework to help teach his sixth-grade son; using the science book, and Google translate, to help work on math, which was easy for his son, while focusing on sentences, which was harder for him.

“I tried to explain the mess. What is the sentence meaning, what is ‘add,’” Asai joked. “But now they have good memory though, other than being challenging.”

Shintaro Watanabe, manager for Toyota Tsusho, experienced a similar struggle when he moved to the U.S. as a teenager. As with Asai’s family, Watanabe moved to the United States when his parents got jobs here.

Although Watanabe’s parents eventually returned to Japan, he decided to stay. He attended college and eventually landed a career that led him to Mississippi in 2013. He met his wife, Ryoko Watanabe, Toyota Mississippi’s HR business analyst, and now the couple are part of Toyota’s permanent staff.

Like her husband, Ryoko Watanabe, who leads Toyota’s efforts to increase awareness of Japanese culture within the Tupelo Public School District, has also lived in the U.S. for more than two decades. Before being hired by Toyota in 2015, she was a TPSD translator.

She sees her current role as helping teachers understand their Japanese students’ adjustment to the U.S. During presentations, she shares the cultural differences between America and Japan, challenges during relocation adjustment, and how TPSD is creating opportunities for children.

“I am very thankful I got this opportunity because this is my passionate area, based on my own graduate and undergraduate research about how immigrants or temporary residents are impacted by the cultural adjustment and how their mental health is impacted,” Watanabe said.

Shino Sullivan was surprised that North Mississippi already had a Japanese Supplementary School when she moved to Oxford in 2011. Before that, Sullivan thought the usual destinations for coming to the United States were the big places: New York, Los Angeles, Chicago. Mississippi was unexpected.

“I didn’t even know there was a Japanese community in Mississippi when I moved here,” she said.

Now, Sullivan is director of UM’s US-Japan Partnership Program, under which the supplementary school is offered. Since she started as an instructor in 2011, she’s seen the program grow from a few to over 26 participants and move from a classroom on UM’s main campus to their own designated space.

Sullivan is a passionate proponent in her role. To ensure students maintain their cultural and educational connections, the supplementary school teaches three subjects according to Japanese Ministry of Education, Culture, Sports, Science and Technology guidelines.

“For students, this is a very short time in their life, living in North Mississippi,” Sullivan said. “I want them to feel they’re not isolated … to have confidence as a Japanese (person).”

The school follows the Japanese school system calendar, hosting classes on Saturday at 9 a.m. to around 3 p.m. from April to March. Students are taught in Japanese, follow punctual scheduling, and practice Japanese customs.

With 16 families, the program is close-knit. Instead of separate classrooms, each grade is taught in the same building. Because they cover first to ninth grades, each of the program’s four tutors teaches at least two grades. The parents are hands-on, often helping as needed.

“I think they need community,” Sullivan said. “We don’t have a wide Japanese society, but they definitely want to connect with other Japanese people in the area.”

Richardson, BancorpSouth’s Japanese liaison, has been saying goodbye for 13 years. She’s watched numerous families return to Japan. Over the years, the faces change, but the pattern remains the same.

“Japanese people are here to learn. It’s not just that they are here visiting, they are actually living here,” Richardson said. “They know how to appreciate their experiences.”

They bring with them their food, language, clothing, and culture. Sometimes, they bring Japanese costumes for special occasions. With limited oriental grocery options, they learn how to make Japanese food with American ingredients.

Southern and Japanese cultures blend out of necessity.

“They adjust, and instead of this ingredient, how about I use what’s available here, and then they just experiment,” Richardson said. “Food is (a) core culture of Japan, but by coming here, they learn how to make what they like using what’s available.”

For Kikuchi, her role as a Japanese liaison is all about easing the transition from Japan to Mississippi. She’s helped create the North Mississippi Cherry Blossom Festival in Tupelo and promotes Japanese culture as a board member for the Gumtree Museum of Art and North Mississippi Symphony Orchestra and involvement with the Tupelo Suzuki Association.

She was honored by the Government of Japan for her efforts in helping bridge southern and Japanese cultures.

Even after years of living in the U.S., Kikuchi remembers what it was like to be a newcomer in this country, far from her home and culture, and how much comfort and help she needed to make that transition.

Now, she wants to repay that kindness by helping others with their own journeys from Japan to Mississippi.

“Hopefully I can share my part back to the community, not only for Japanese families but also for (the) American community,” Kikuchi said. “It’s scary if you don’t speak the language, and I think if we can overcome the difference between the culture and the language, we can make a great friendship.”

Want updates sent to your inbox? Subscribe to The Daily, our all-you-need-to-know newsletter.

Hear what Dr. Fauci thinks about vaccine boosters for kids