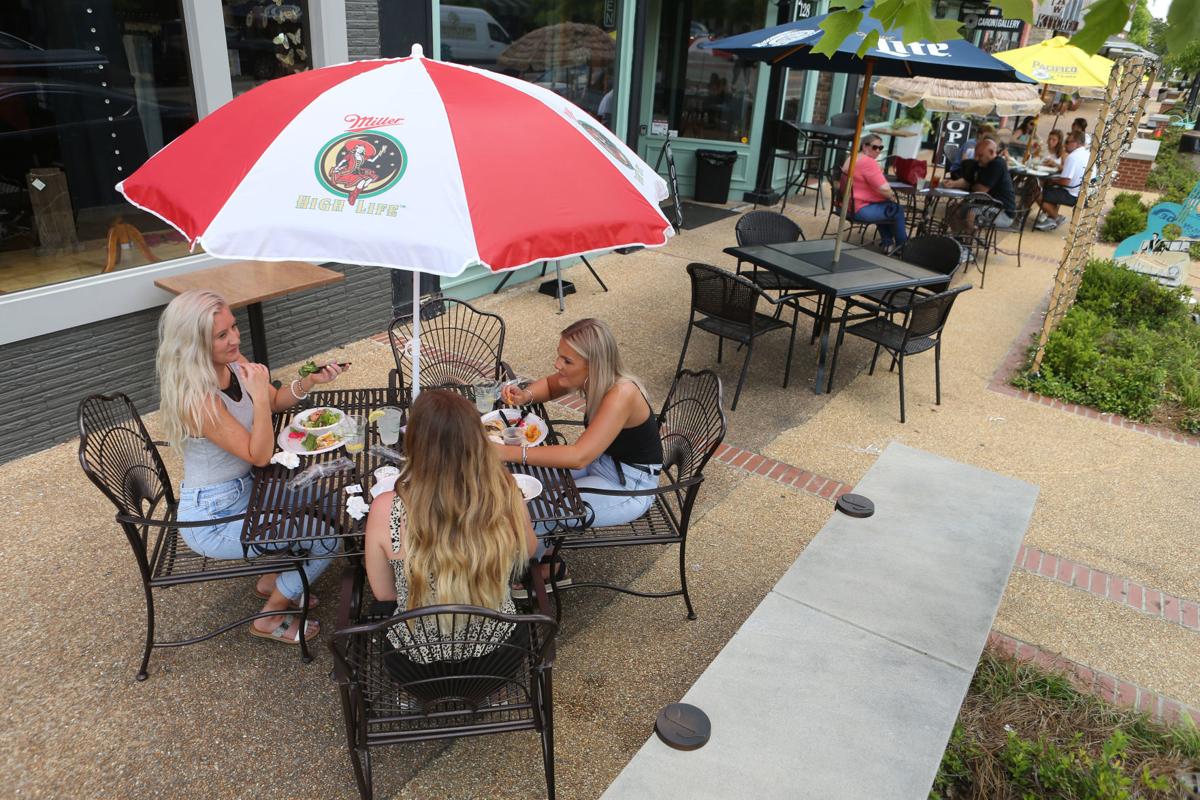 Bethany Nash of Iuka, Hannah Beard of Booneville, and Hannah Anglin of Baldwyn sit outside in downtown Tupelo as they enjoy their lunch from Amsterdam Deli on Tuesday. 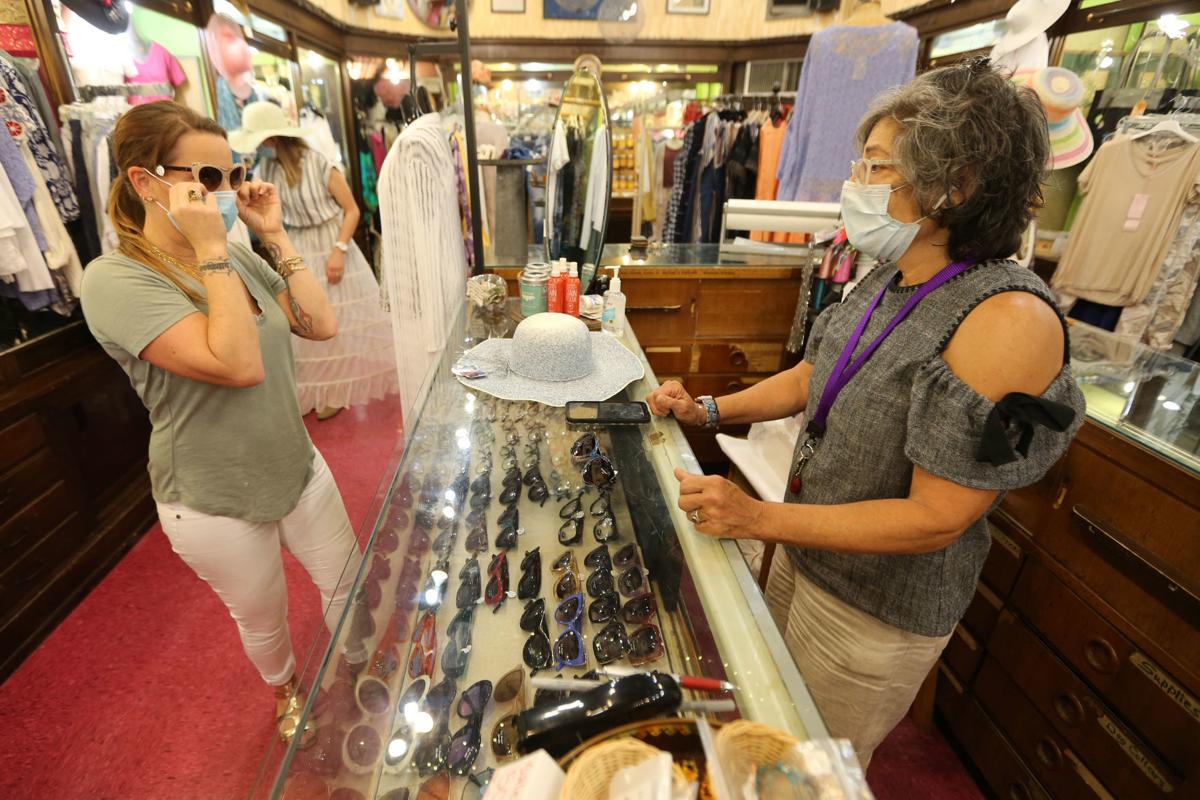 Barbara Fleishhacker, right, owner of The Main Attraction in downtown Tupelo, helps customer Melissa Ratliff of Tupelo shop for a new pair of sunglasses on Tuesday. 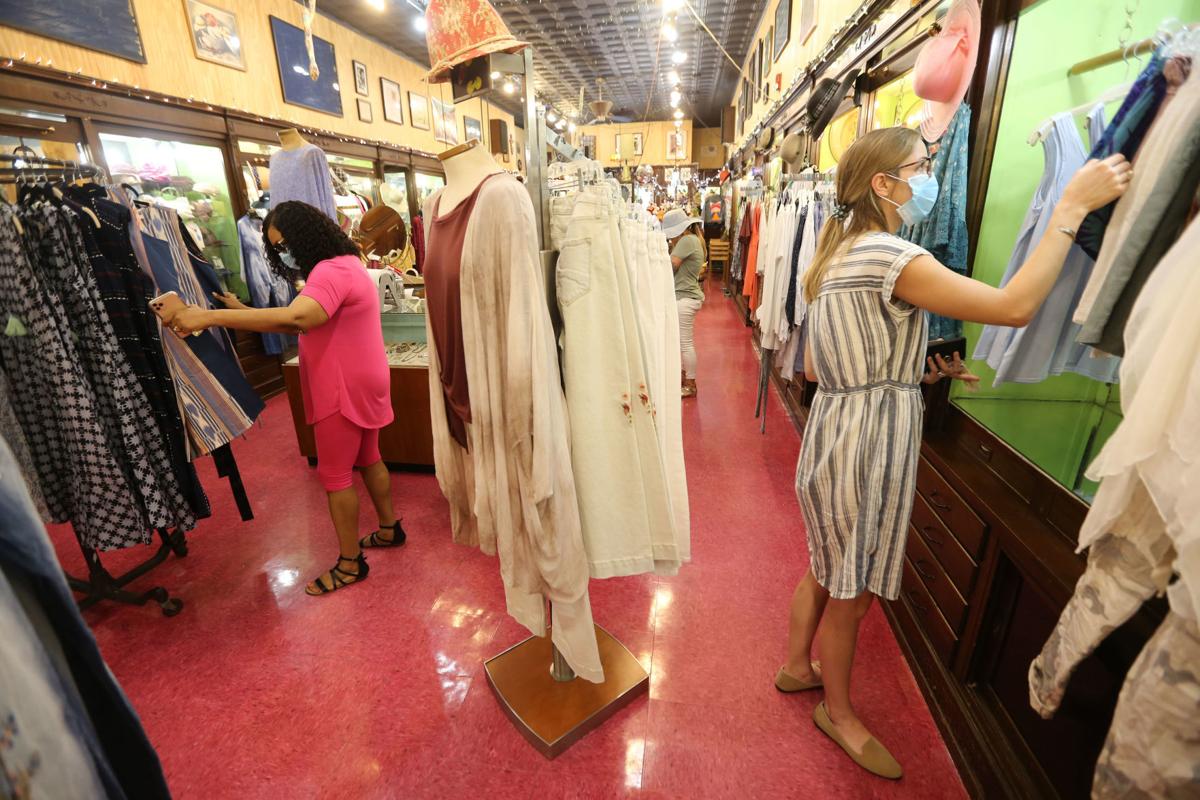 Shanta Sneed and Brittany Murphy shop at The Main Attraction in downtown Tupelo on Tuesday during their lunch hour.

Bethany Nash of Iuka, Hannah Beard of Booneville, and Hannah Anglin of Baldwyn sit outside in downtown Tupelo as they enjoy their lunch from Amsterdam Deli on Tuesday.

Barbara Fleishhacker, right, owner of The Main Attraction in downtown Tupelo, helps customer Melissa Ratliff of Tupelo shop for a new pair of sunglasses on Tuesday.

Shanta Sneed and Brittany Murphy shop at The Main Attraction in downtown Tupelo on Tuesday during their lunch hour.

TUPELO • Two months seems almost a lifetime ago for many downtown business owners. That’s when the coronavirus pandemic began the shutdown of many shops and restaurants, leading to weeks of worry and angst.

What would the future hold? Where would the customers go? Would they come back?

Although it’s only been a few weeks since businesses got the OK to reopen, owners are cautiously optimistic. What they’ve experienced gives them hope, although worry does linger.

Barbara Fleishhacker opened The Main Attraction in 1988, but the past couple of months has been like no other, even counting the three recessions that have happened since then. The COVID crisis has been life- and business-altering.

“It’s going to be weird,” she said. “The new reality is something I don’t know. I’m not used to having to keep my distance from people. You don’t want to breathe on anybody or get too close, but I’ve always been a hugger.”

Melissa Ratliff was among the first customers Tuesday when Fleishhacker opened her store. After nearly an 11-week layoff, Fleishhacker reopened last Thursday.

Ratliff was joined by two co-workers at the store, and she almost immediately found a pair of sunglasses and a hat she liked.

And there’s been quite a bit of buying lately, as pent-up demand has shoppers coming into the shops and boutiques.

Kim Caron has been pleasantly surprised that business has continued to pick up at the Caron Gallery where local and regional artists’ works are sold.

And at Amsterdam Deli, business is even better than expected.

“We’ve been busy,” said co-owner Ruth Erar. “Everybody wants to sit outside, though. We’ll fill up during lunch and then we have people come and even call to make reservations to sit outside.”

The outside tables weren’t originally part of the plan for serving, but since there’s been an overwhelming demand, Amsterdam has gone from three to five to now nine tables on the sidewalk.

As for the coronavirus, it doesn’t seem to be a big concern for most of her customers, Erar said.

“We still have customers who want to pick up or carry out and aren’t ready to sit down yet,” she said. “And that’s OK – we’re happy to take the food out to them.”

All but two of her staff has returned, and Erar thinks the worst of the crisis is over. The biggest change she’s seen is the amount of delivery business the restaurant has had. Like many eateries in town, Amsterdam partners with Tupelo2Go.

“Before the coronavirus we had a lot more call-in orders; now people have gotten used to getting it delivered,” Erar said.

One downtown business hasn’t yet reopened, to the surprise of many – Kermit’s Outlaw Kitchen. But owner Mitch McCamey has a plan in place.

“We’re reformatting KOK fundamentally, basically changing everything about it,” he said. “There’s not one thing on the old menu that’s on the new menu.”

McCamey hopes to reopen the restaurant soon, but he’s not sure if that means this month or next month or this fall.

“We’re cleaning, painting, reorganizing, then we’ll start training,” he said. “We want to open, we want to feed people, we want to give people their jobs back.”

McCamey said he’s changing the restaurant’s menu and vibe for two reasons. First, he said the down time during the pandemic has allowed him and his staff to step back and look at how the restaurant was operating.

“We did what we did for a long time and we realized we just weren’t in love with it anymore,” he said. “We’re really excited about what we’re about to do.”

The second reason for the change is to get ahead of the curve and prepare for an uncertain future.

“We’re trying to adapt to the pandemic,” he said. “We’re trying to find a way to operate faster, safer and kinder. We’re changing everything – how you order, where you order. We think we can put a better concept in there.”

The new menu will feature two ways of eating: good for you, and good for the soul. Half of the menu will be devoted to healthy eating, and the other half will be KOK’s take on slow food. A tentative new name for the restaurant is Kermit’s Soul Kitchen.

“When we come out of this, we want to serve Tupelo the best way we can,” McCamey said. “We hope customers come back and help us make it better. We hope people will go down this road with us.”

Meanwhile, other businesses that have reopened are enjoying a resurgence in interest and, more importantly, sales.

The Caron Gallery during the shutdown maintained business though its website, and Caron said it was “the saving grace.”

“Having people able to access that since they were home so much, they really used it a lot,” she said. “We shipped out almost every day for the last four weeks. It’s just continued on, and we’re shipping all over the place. People are still coming in and picking up, and we’re busy.”

The week of spring break is when things came to a head and retailers and restaurants started to close. Caron said business came almost to a screeching halt.

“It’s busier than ever,” she said. “We were having a pretty good year, but now, the numbers are really strong. I have no complaints.”

Caron speculates that a lot of pent-up demand is built into the surge in business and hopes the momentum continues into the fall and the Christmas holidays.

“People were ready to get out and see something, and we’ve been really fortunate,” she said. “We’ve had traffic; it hasn’t been crazy busy, but all things considered, it’s probably better than expected.”

As for wearing masks at stores and restaurants, it’s hit and miss.

At The Main Attraction, Fleishhacker is limiting the number of customers at one time to four, and they have to wear a mask. One is provided if a customer doesn’t have one.

Out of precaution, Fleishacker is requiring the masks; she also cares for her elderly mother, and wants to mitigate any potential risk of contracting the coronavirus.

“My mom is 85, and we have a lot of customers whose parents are older, so we want to take it seriously,” she said. The counters and even pens are wiped down at the store, and hand-washing comes frequently.

Said Morgan, “There are some people still not willing to go into buildings and we understand that. I have an aunt who’s 92 and her daughter is her primary care person. My aunt doesn’t think it’s a big deal to go anywhere, but my cousin knows she’s caring for her, so she’s being more careful.

“Some retailers are requiring masks, and some aren’t, and I think that’s fine. Our store is pretty open and it’s two stories, plus we can slide open the front door. We have all the things to give you space.”