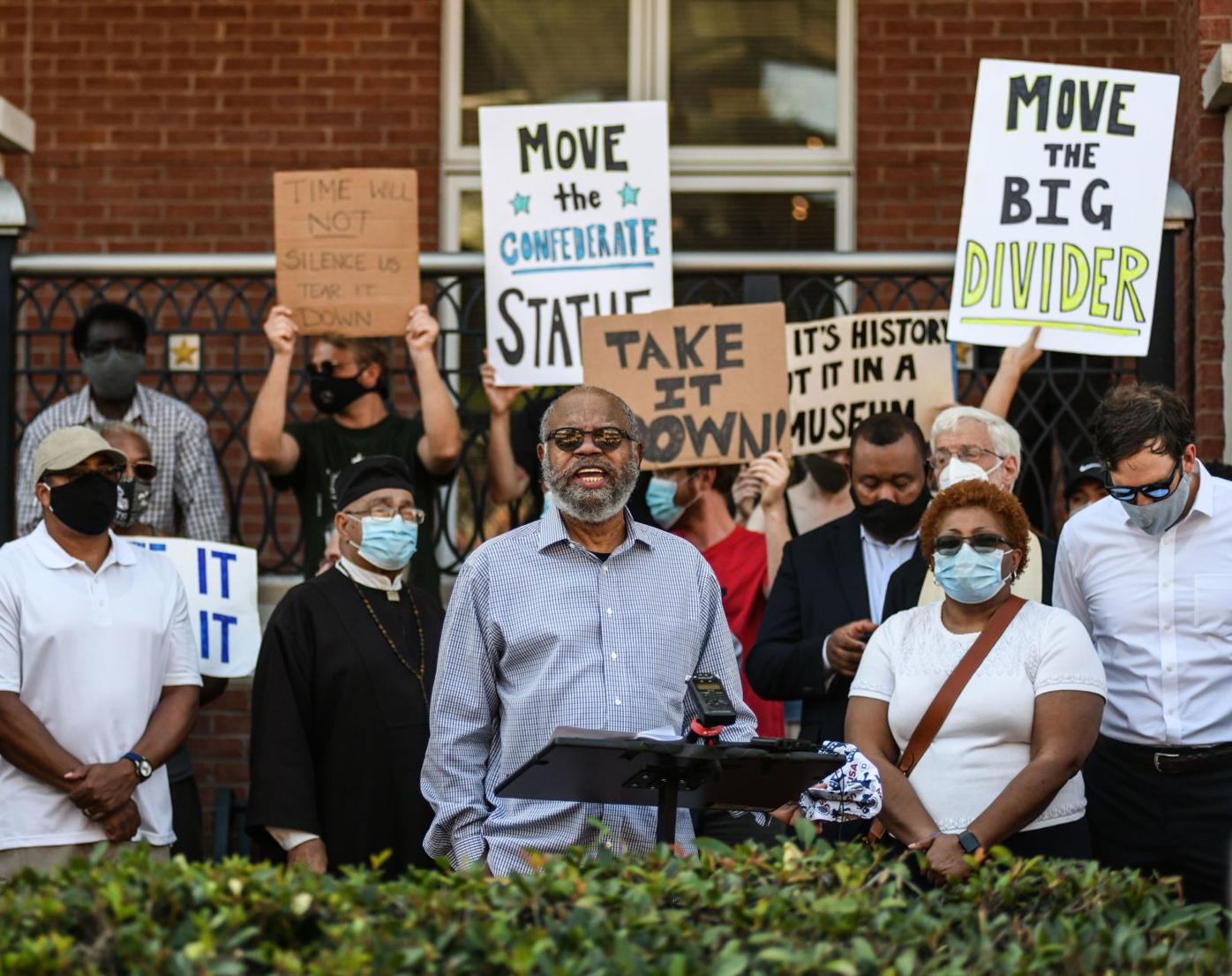 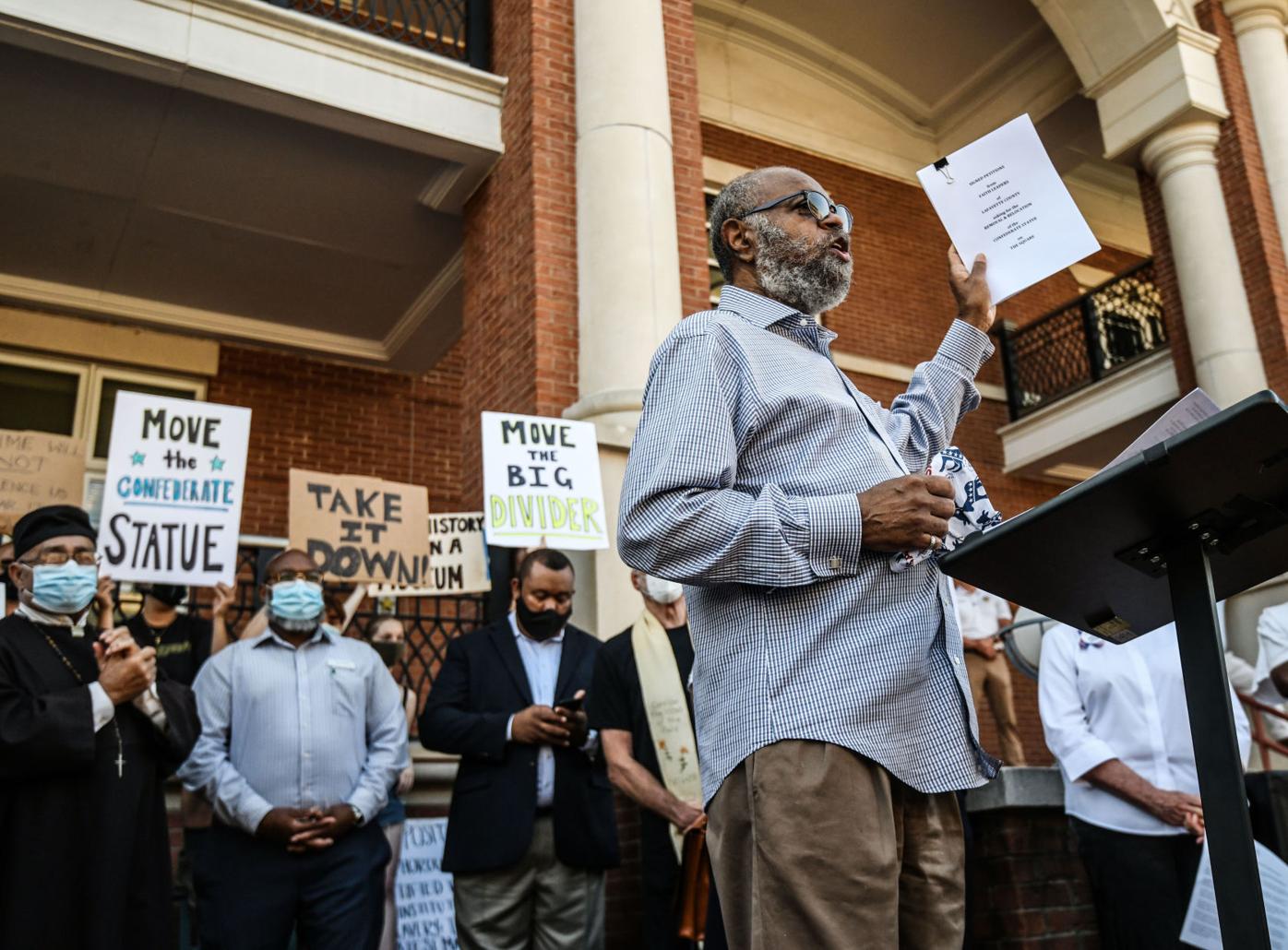 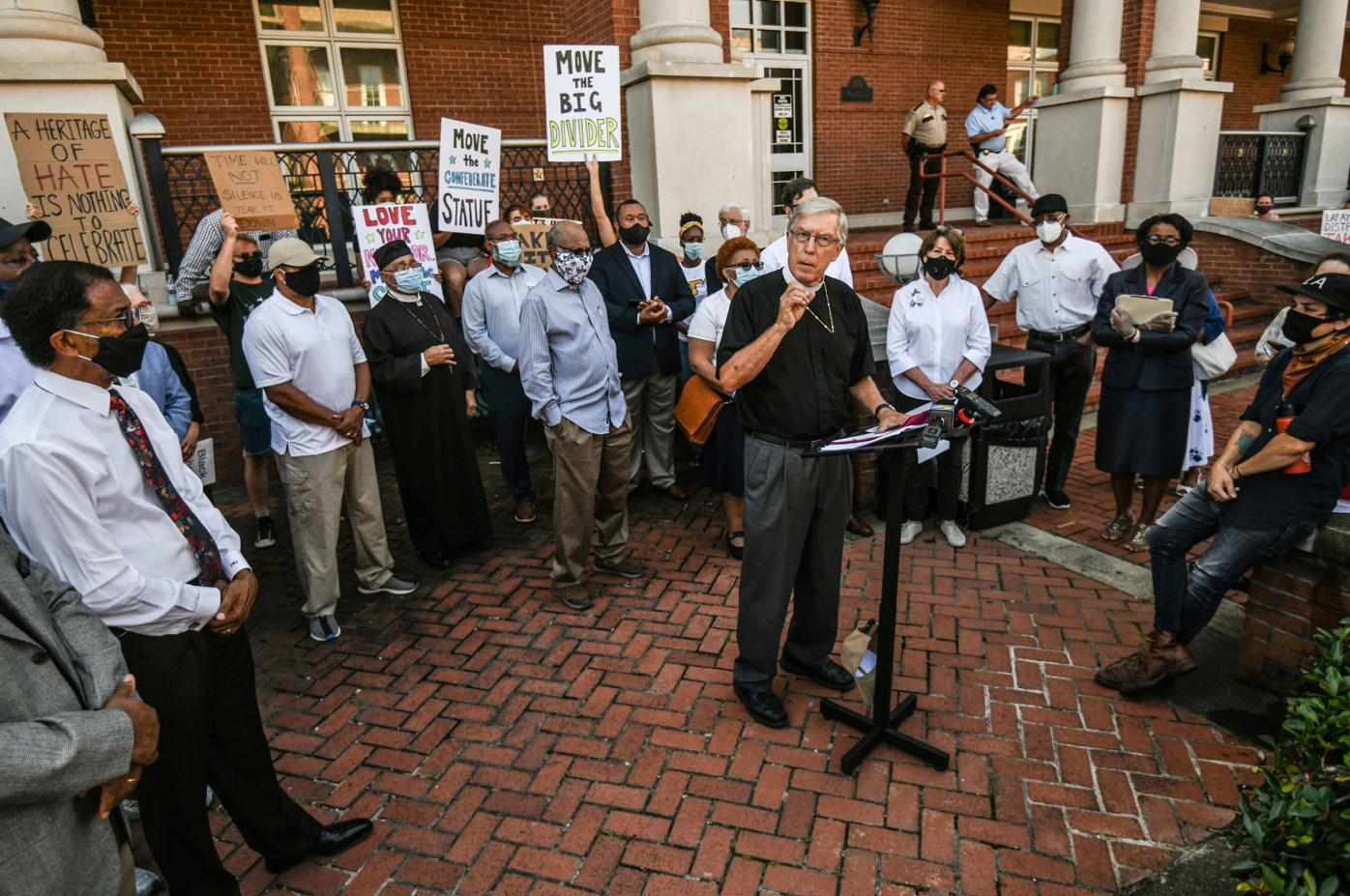 Right Rev. Duncan Gray III, retired Bishop of the Episcopal Church of Mississippi, speaks outside the Lafayette County Chancery Building at a press conference calling for the the moving of the Confederate statue located at the Lafayette County Courthouse, in Oxford, Miss. on Monday, July 20, 2020. (©Bruce Newman) 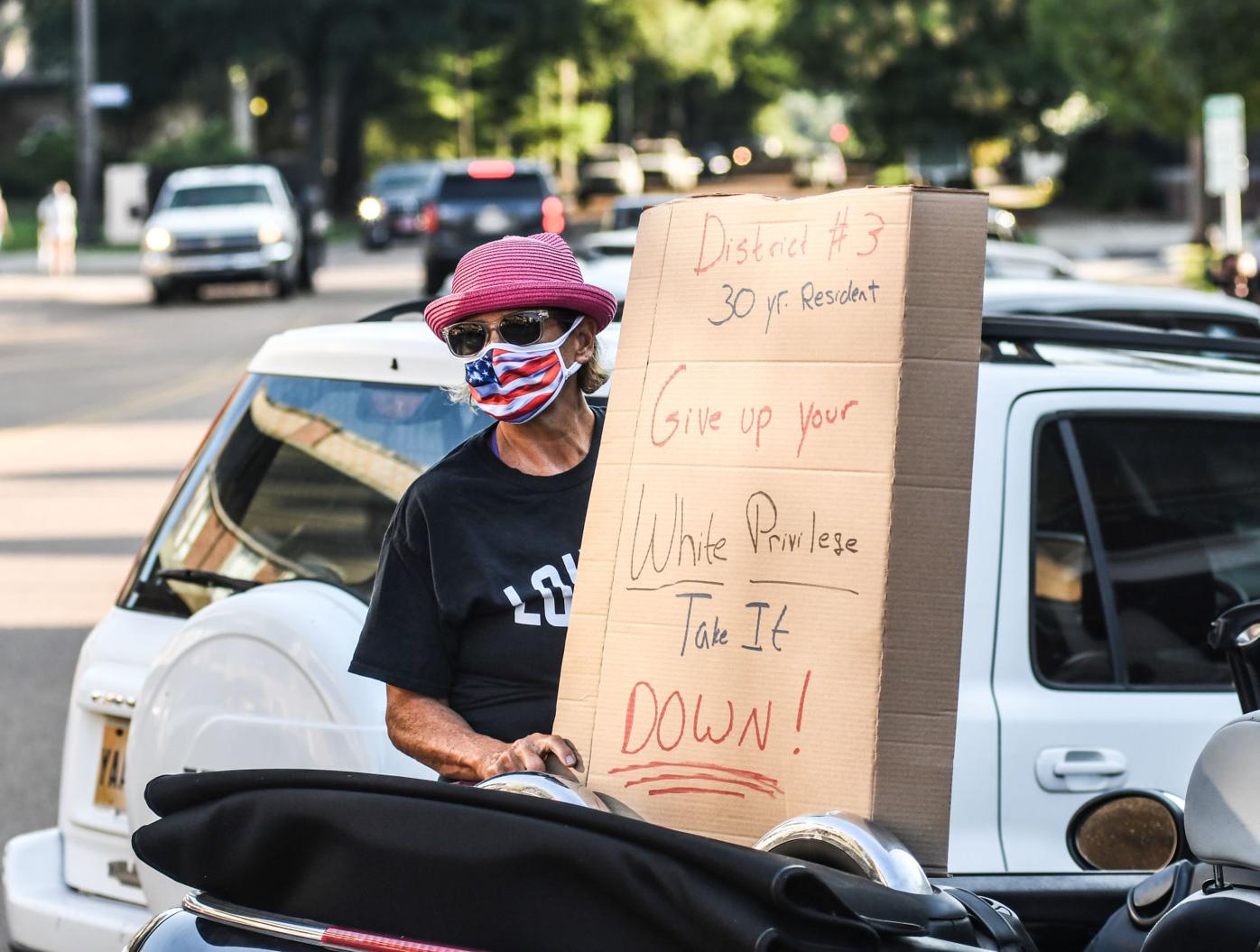 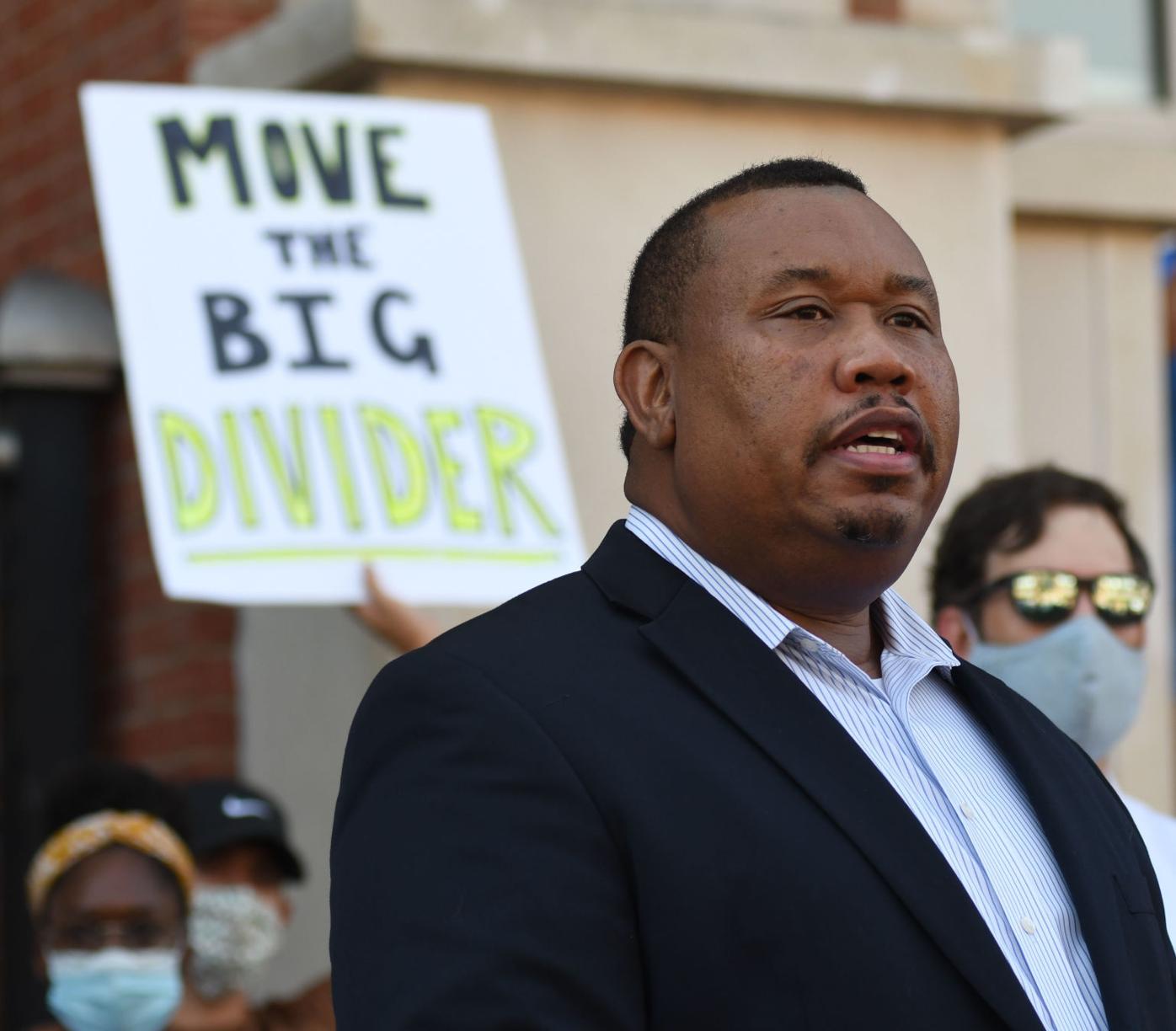 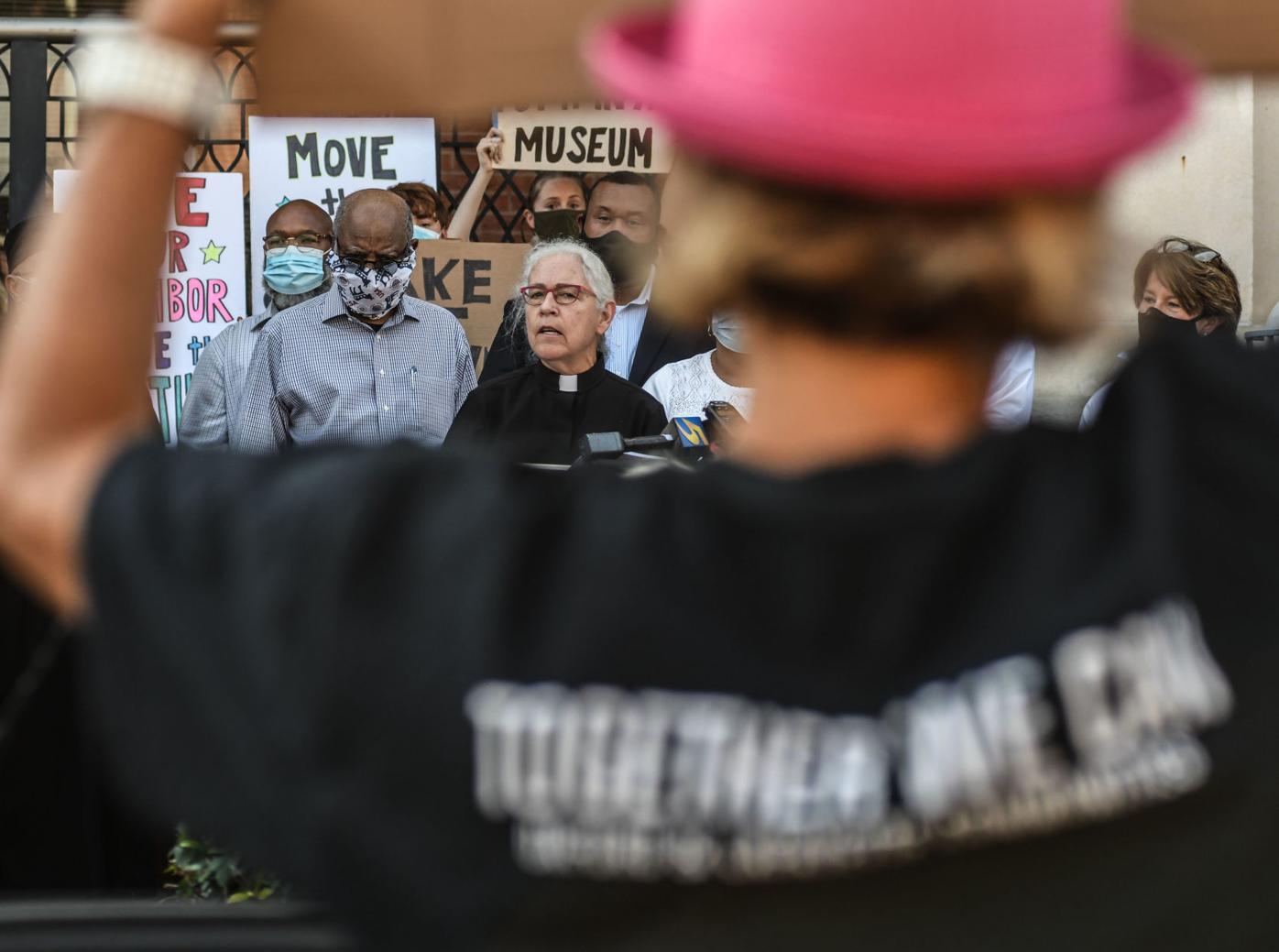 Reverend Dr. Gail Stratton of Unitarian Universalist Church speaks outside the Lafayette County Chancery Building at a press conference calling for the the moving of the Confederate statue located at the Lafayette County Courthouse, in Oxford, Miss. on Monday, July 20, 2020. (©Bruce Newman) 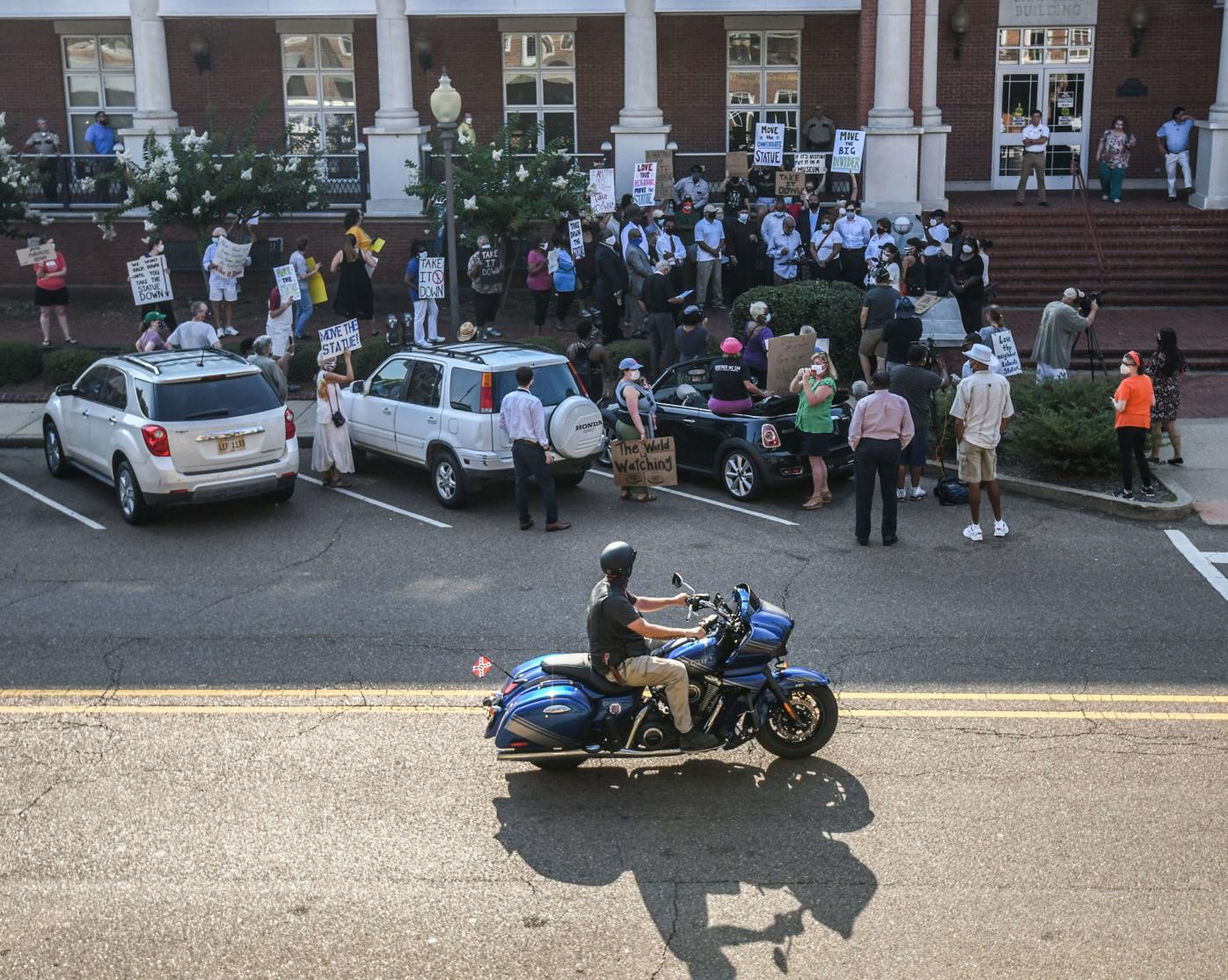 Right Rev. Duncan Gray III, retired Bishop of the Episcopal Church of Mississippi, speaks outside the Lafayette County Chancery Building at a press conference calling for the the moving of the Confederate statue located at the Lafayette County Courthouse, in Oxford, Miss. on Monday, July 20, 2020. (©Bruce Newman)

Reverend Dr. Gail Stratton of Unitarian Universalist Church speaks outside the Lafayette County Chancery Building at a press conference calling for the the moving of the Confederate statue located at the Lafayette County Courthouse, in Oxford, Miss. on Monday, July 20, 2020. (©Bruce Newman)

OXFORD • Over 80 Lafayette County faith leaders and citizens gathered in front of the Lafayette County Chancery Court Building on Monday to demand that county supervisors reverse their vote to keep a Confederate statue prominently displayed in the center of the Oxford Square.

“What is taking place this morning is not just of one group of people. It’s not even of just the faith community. What we are experiencing here this morning are the thoughts and sentiments of Lafayette County citizens who are offended, who are hurt and who feel that that monument is an offense to all of those of us who believe in unity,” said the Rev. James Hull, president of the Tallahatchie-Oxford MB Ministerial Alliance of 18 African American churches in Lafayette County.

Many protesters held signs saying variations of “Take it Down,” “Move the Confederate Statue” and “Relocate the Statue.”

During the press conference, the Rev. Duncan M. Gray III, the retired bishop of the Episcopal Diocese of Mississippi, the Rev. Ronnie Driver, member of Flint Hill M.B. Church in Lafayette County and the Rev. Dr. Gail Stratton, a Unitarian Universalist community minister, spoke on behalf of over 70 faith leaders supporting relocation of the Confederate statue.

The call to action was organized after requests to meet with the Lafayette County Board of Supervisors during their July 20 and July 6 meetings were denied, the organizers said.

The supervisors on July 6 voted to reject a proposal to relocate the monument from its prominent location on the Square to another county-owned location. Some members of the board said they did not believe that relocating the monument would cause true unity in the county, an idea that Lafayette County ministers pushed back against.

“The Confederate memorial that stands in the heart of downtown does not signify unity in our community. It reflects such a negative time in history. As a community, it is time to take a stand to remove what reflects what is negative (and) to stand on what reflects positive,” Driver said.

Hull said the press conference was a message to the supervisors who voted to maintain the statue that the monument “has no place among us that honor truth.”

Stratton emphasized not only moving the monument, but the need for leadership.

“We need leaders to not only take down that statue in our square, but ones that will lead us in learning and knowing and grieving the truth of our history,” Stratton said.

The Rev. Chris McAlilly, a pastor at Oxford University United Methodist Church and a Tupelo native, attended the protest. He told the Daily Journal that he decided to band together with the other faith leaders to encourage the supervisors to reconsider the type of message the Confederate monument conveys.

“I support the relocation of the monument because I don’t think it represents who we want to be as a county,” McAlilly said.

The board convened its regular meeting at 9 a.m. on Monday. District 5 Supervisor Mike Roberts, who also serves as president of the board, told the Daily Journal that he has not yet heard any specific demands from the organizers, but he does plan to listen to their concerns.

When asked about the claims that the county denied the group’s request to address the board publicly, Robert’s said “we’ve already been down this.”

On June 22, the supervisors convened a public hearing to allow both proponents and opponents of the monument’s relocation to address the board for 30 minutes each.

The faith leaders’ demands come at a time when numerous cities and counties throughout the state are having discussions about what action, if any, should be taken to either remove or relocate the monuments to the Confederacy.

Most of the Confederate monuments were erected in prominent places on public property well after the U.S. Civil War concluded, and the overwhelming majority of academic historians agree that the monuments were put up as part of the Lost Cause ideology to perpetuate the false narrative that the war was not fought over slavery. Gray said as a fourth-generation Oxford resident, he saw the statue as a powerful symbol.

“That is why it is so dangerous … not simply for us, but for generations,” Gray said.

During the past few weeks, supervisors in Bolivar, Leflore, Lowndes, Noxubee and Washington counties have voted to move Confederate statues away from courthouses. The Lee County Board of Supervisors are still in the process of hearing from constituents on whether it should relocate a Confederate monument on public property.

The University of Mississippi, located in Lafayette County, last week officially relocated its Confederate monument from the center of its campus to the Confederate cemetery, which is currently behind a former basketball stadium.

Ruby Kelley, one of the organizers of the event, said this event was just the beginning of the group’s efforts.

“This is not the end. We are going to continue to persevere. We are just pleased with the unity that this press conference demonstrated today because the supervisors’ sort of felt that we were not unified in our effort. This is showing them we are unified,” Kelley said.

Organizer Arami Harris of Take It Down Oxford, a group of Lafayette County citizens seeking to relocate the monument, said she is thankful faith leaders are getting involved and hopes it encourages other area churches, especially any larger white churches, to get involved.

“I think this is really huge in terms of the next step of where this movement is going,” Harris said. “I’m really looking forward to continuing working with the faith leaders of Oxford and also whoever else wants to join.”

“We refuse to be silenced”: Oxford organizers plan next steps in call to remove Confederate monument

OXFORD • After the Lafayette County Board of Supervisors voted unanimously against a proposal to relocate the Confederate monument, organizers…