Ted Clem and others protest outside the Lee County Board of Supervisors building Monday morning to demand the board vote to relocate the Confederate monument from the grounds of the Lee County Courthouse. 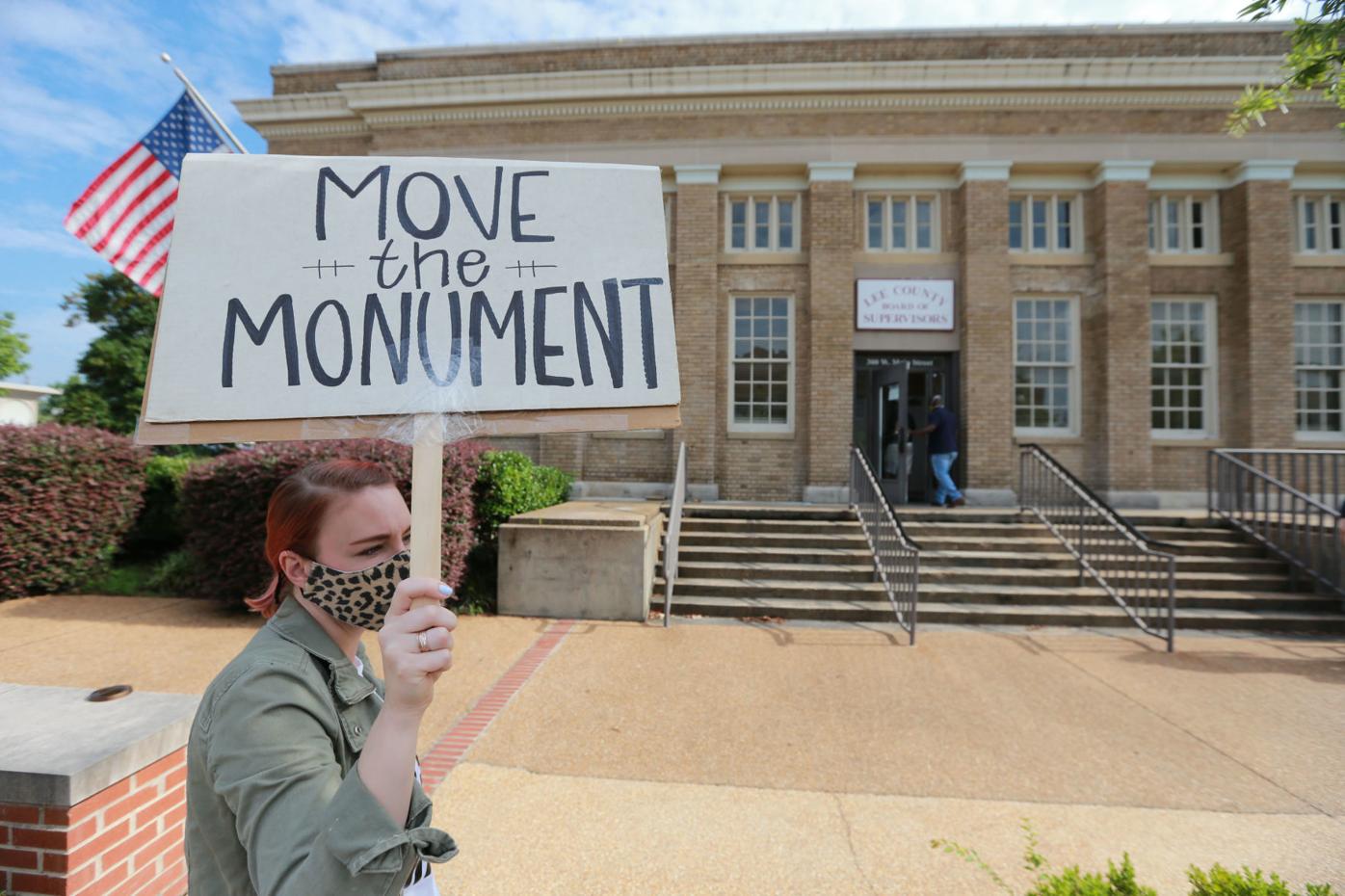 Christy Stewart and others protest outside the Lee County Board of Supervisors building Monday morning ask the supervisors vote to relocate the Confederate monument from the grounds of the Lee County Courthouse. 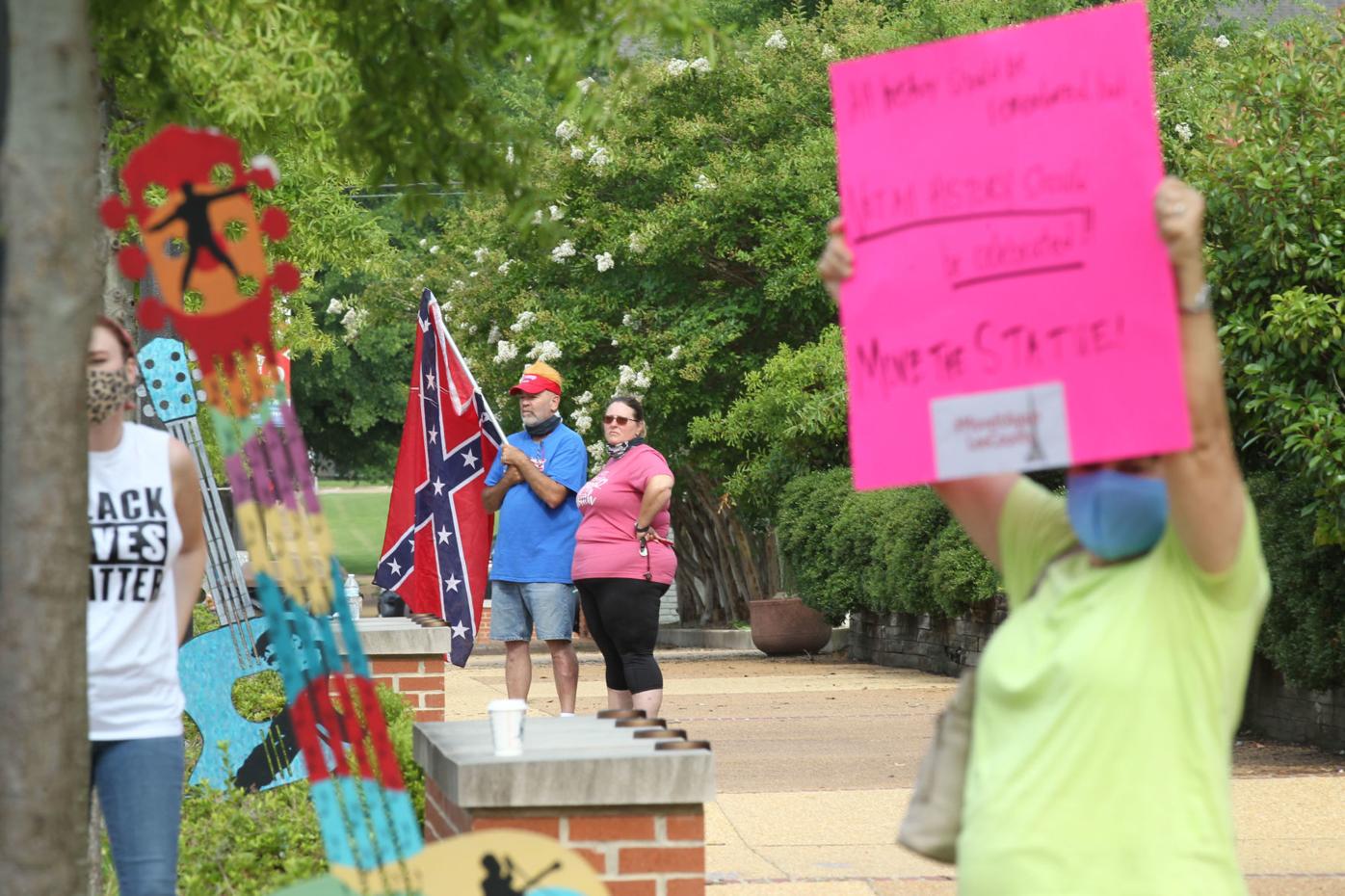 A supporter of keeping the Confederate monument in its current location on the grounds of the Lee County Courthouse stands nearby and watches as others protest the monument’s location. 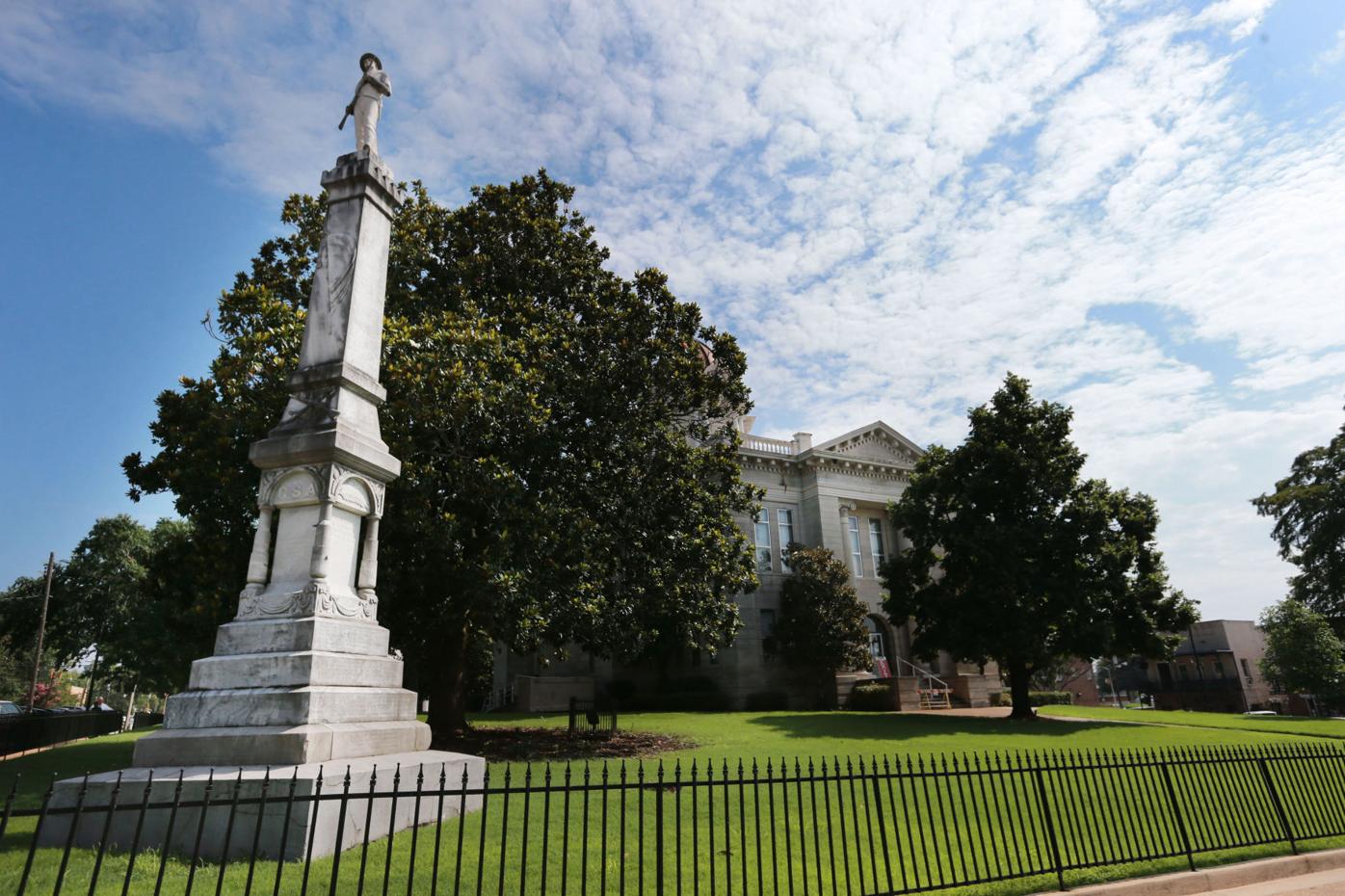 The Confederate monument at the old Lee County courthouse was originally erected in 1906 on Main Street in Tupelo, and later relocated to its current location.

Ted Clem and others protest outside the Lee County Board of Supervisors building Monday morning to demand the board vote to relocate the Confederate monument from the grounds of the Lee County Courthouse.

Christy Stewart and others protest outside the Lee County Board of Supervisors building Monday morning ask the supervisors vote to relocate the Confederate monument from the grounds of the Lee County Courthouse.

A supporter of keeping the Confederate monument in its current location on the grounds of the Lee County Courthouse stands nearby and watches as others protest the monument’s location.

The Confederate monument at the old Lee County courthouse was originally erected in 1906 on Main Street in Tupelo, and later relocated to its current location.

TUPELO • A group of around 15 people gathered in the downtown area on Monday morning to ask the Lee County Board of Supervisors to relocate a Confederate monument that currently stands on the grounds of the Lee County Courthouse.

Leah Davis, a native of Tupelo, is leading the effort to relocate the monument. She addressed the board at its regular meeting where she asked the five-member group to “imagine a future for our community so that we can truly move forward.”

“We have to reveal a more honest history, and not the romanticized version that’s inscribed on the Confederate monument,” Davis said. “We need to acknowledge that 100 years ago, Lee County was entrenched in the painful parts of Mississippi. We must acknowledge that this decision echoes our community today.”

The monument was first erected in 1906 by the United Daughters of the Confederacy. It was initially placed on Main Street, but it was relocated in the 1930s to the downtown area near the courthouse, where it currently stands. One of the inscriptions of the monument states that “those who die for a right principle, do not die in vain.”

Most academic historians have concluded that Confederate monuments such as the one in Lee County were erected as part of the “Lost Cause” movement that attempts to glamorize the South before the U.S. Civil War, gloss over the atrocities of slavery and create the myth that the U.S. Civil War was not fought over slavery.

“It is time that we Mississippians of all races, religions, and creeds reclaim our space, reclaim our courthouse, and reclaim our county to be a place where we can exert our American freedoms to pursue happiness without prominently displayed symbols that push a romanticized, dangerous narrative of our egregious past,” Davis said.

Davis stated that she and others had collected more than 1,000 signatures in favor of the board relocating the monument.

The Mississippi Legislature in 2004 passed a law that prohibits governing bodies from removing military monuments, including Confederate monuments, although the law does not list any penalties if a governing body does remove a monument. The law, signed by former Gov. Haley Barbour, says that governing bodies can relocate a memorial “to a more suitable location.”

A majority of the board told the Daily Journal that they would be opposed to relocating the monument.

District 1 Supervisor Phil Morgan told the Daily Journal that he is not in favor of relocating the monument.

District 2 Supervisor Mike Smith told the Journal that he does not yet have an opinion on relocating the monument, but he will continue to take Davis’ comments under consideration.

District 3 Supervisor Todd Jordan told the Journal that he believes if one monument is relocated or removed, then all monuments on county property should be removed or relocated.

“My thought is leave it where it is, but also if you take one down or move one, you need to take them all down,” Jordan said.

District 4 Supervisor Tommie Lee Ivy, the only Black supervisor on the board, told the Journal he would like to see the monument relocated to a more appropriate place. He suggested one possibility could be to relocate the monument to Brice’s Crossroads, a Civil War battle site managed by the national parks service.

“The Civil War is over with,” Ivy said. “That monument is intimidating to Black people.”

District 5 Supervisor Billy Joe Holland told the Journal that he will also continue to take all comments he receives under consideration, but he currently believes the monument should not be relocated.

Before the meeting began, several people protested outside the Lee County Board of Supervisors’ building as a way to demand the board relocate the monument. The protesters included Black and white people from throughout Lee County. Bernice Moore of Belden said she and her husband Tony came because they’ve been “waiting for years and years” to see Confederate monuments moved.

“We grew up in the South and we don’t need to be constantly reminded of the Confederacy because they didn’t win,” Moore said.

Protesters waved signs towards Main Street. Occasionally, cars would honk or wave back. A couple of passersby gave negative feedback.

Teresa Roberts of Shannon has been protesting since 1978 and said she continues to protest to fight for rights.

“I will fight until I can’t fight anymore for what’s right, and like (one sign) says, history is to be remembered but not all history needs to be celebrated,” Roberts said. “It’s dehumanizing, and that’s what these statues stand for, oppression and dehumanizing people.”

Other protesters, such as Beth Chambers of Tupelo and Ashley Williams, suggested that if the statue is kept, it should be moved to a location that puts it in proper context.

“Personally, I’d rather see the thing turn to powder, but Brice’s Cross Roads is out of the way, it’s not in front of a justice building and people can go visit it if they want to,” Williams said.

About four counter protesters were also on scene. A group of three counter-protesters, with one holding a large Confederate flag, stood distanced from the “Remove the Statue” protests until about 9:42 a.m. A separate, lone counter-protester with the now-retired Mississippi state flag containing the Confederate battle flag emblem also appeared at approximately 9:51 a.m., interacting briefly with protesters. Protests remained peaceful.

After the meeting began, everyone was eventually allowed to enter into the meeting.

The Mississippi Ethics Commission, the organization which enforces open meetings and public records laws, advised public bodies in a statement to try and carry out the spirit of open meetings laws while adhering to federal and state health guidelines.

“The Ethics Commission also encourages public bodies to comply with the Open Meetings Act as best they can under these extraordinary circumstances,” said Tom Hood, the executive director of the commission. “Public bodies should take all measures within their means to ensure transparency in public affairs while doing everything possible to protect public health.”

Leonard Van Slyke, an attorney for the Mississippi Press Association, previously told the Daily Journal that public bodies, the media and the general public should all try to coordinate with one another in good faith regarding access to meetings, but overall, public bodies are still required to follow the spirit of the Open Meetings Act even during a pandemic.

“They can bar members of the public (from physically attending) as long as the public still has access to the meeting via teleconference,” Van Slyke previously said.

Bill Benson, the county administrator, previously told the Daily Journal that if any physical limitations were placed on members of the public from physically attending a supervisors’ meeting, the county would have some way for the public to participate, either by Zoom or by telephoning in.

There was no written policy posted in the county building, no teleconferencing equipment inside the meeting room and no telephone set up to allow members of the public to call into the meeting to allow for alternative means of public participation.

Benson told the Journal he thinks asking people to wait in the lobby was just an impromptu idea by the board of supervisors and the county was simply trying to find the best way to conduct public meetings during the pandemic.