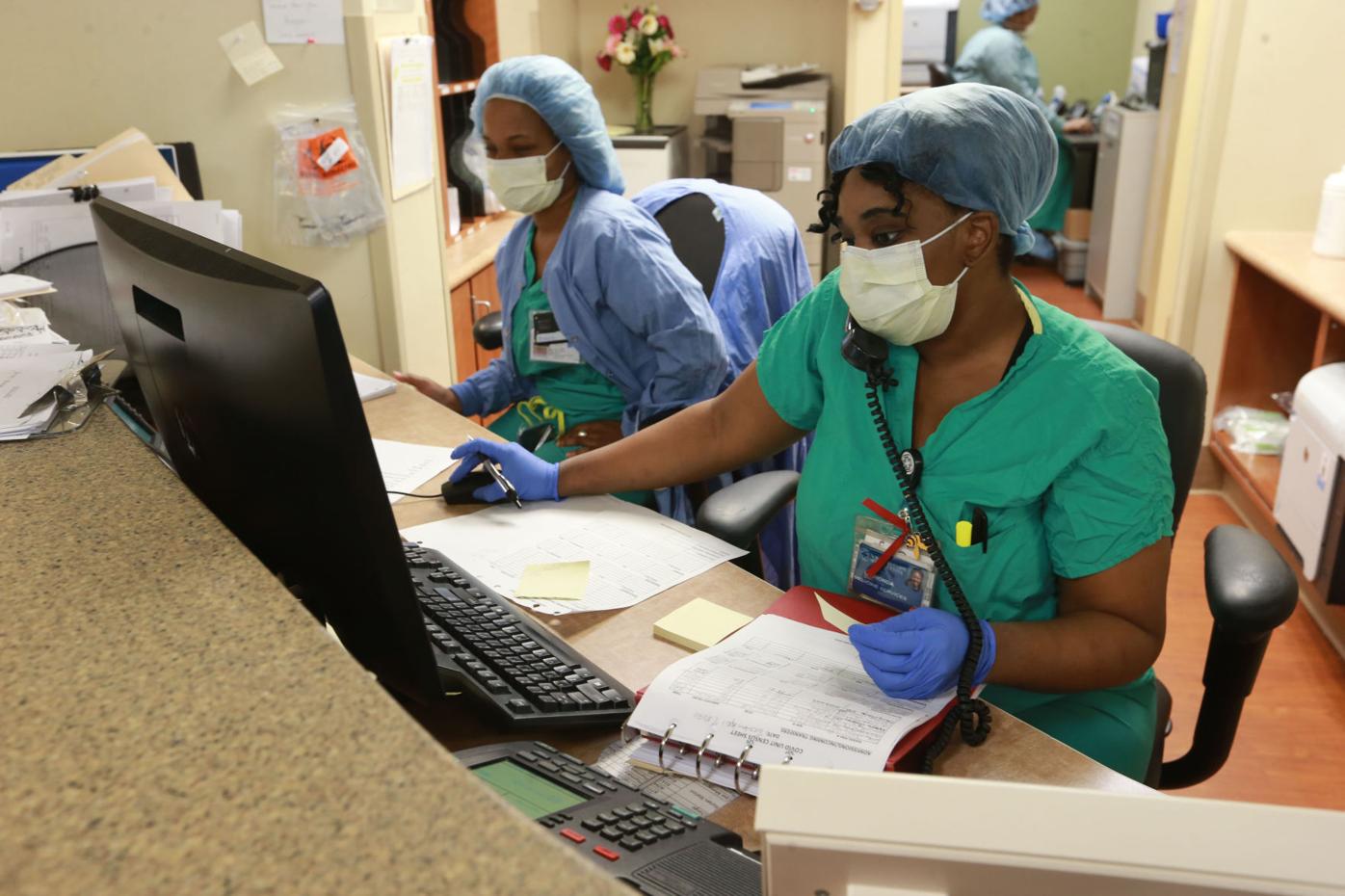 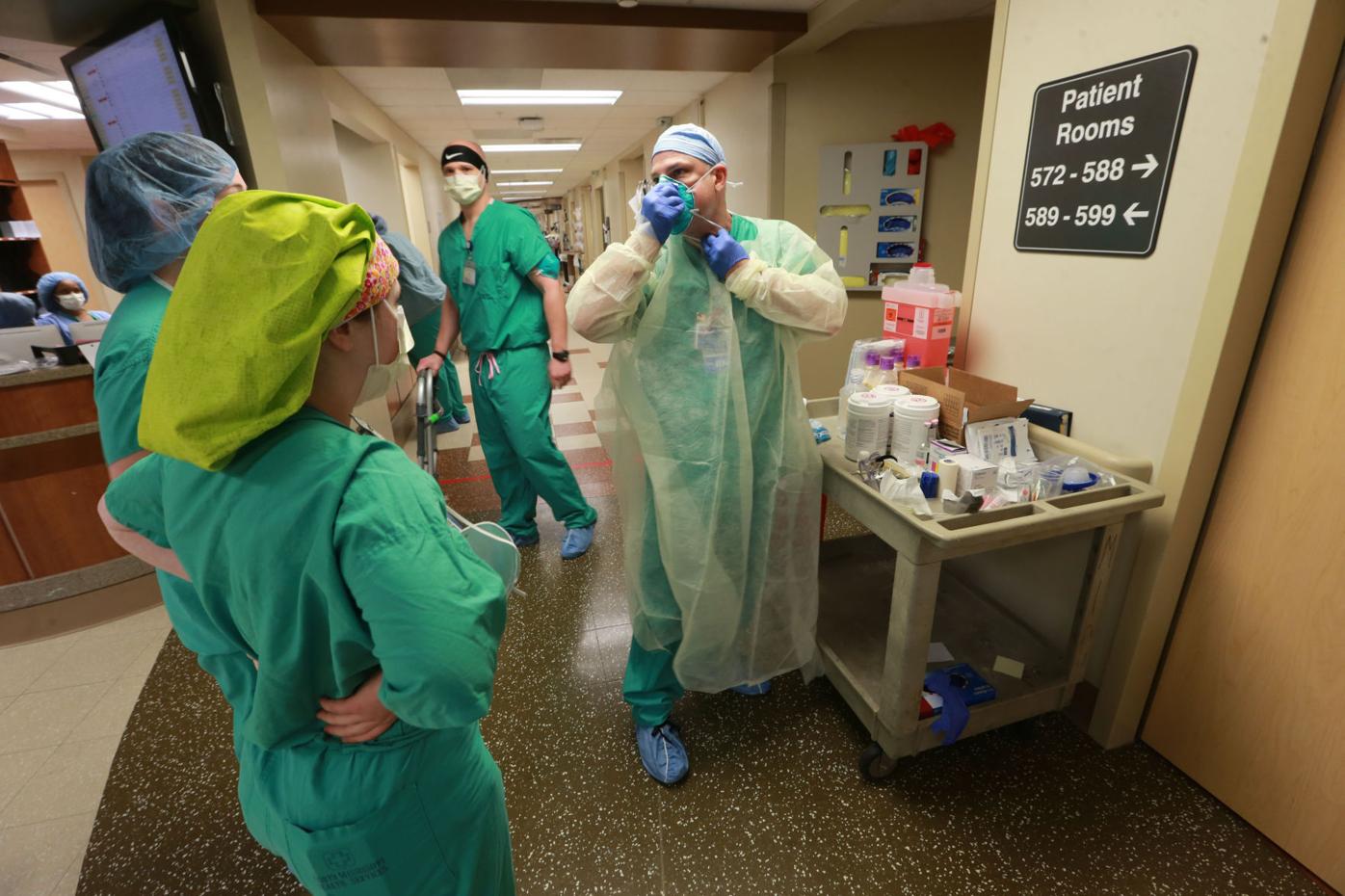 North Mississippi Medical Center nurse Jimmy Little begins suiting up in PPE before entering one of the floors dedicated to treating Covid-19 patients in Tupelo.

North Mississippi Medical Center nurse Jimmy Little begins suiting up in PPE before entering one of the floors dedicated to treating Covid-19 patients in Tupelo.

As of Tuesday, NMHS was reporting 70 COVID-19 patients hospitalized across the system, a single-day increase of 11 over the previous day’s reported total of 59.

The most patients ever hospitalized within the NMHS currently stands at 75, a peak reached on July 23. The numbers reported from NMHS are consistent with trends across the state.

“In the last seven days our emergency department presentation of patients that are suspicious or positive for covid have tripled in four of our communities,” said Dr. Jeremy Blanchard, the chief medical officer for NMHS, which has facilities across the region.

In a Tuesday afternoon press briefing conducted online, State Health Officer Dr. Thomas Dobbs repeated his growing alarm that the medical system in Mississippi is once again straining to its limits.

“We are right up against the margins of our capacity,” Dobbs told reporters.

Rather than the concerns about personal protective equipment or ventilators that dominated early conversations about the spread of COVID-19, Dobbs and Blanchard both emphasized that a shortage of medical personnel is actually now the more pressing issue.

In the early spread of the virus, different areas of the United States experienced the brunt of the disease at staggered times.

Not so much anymore.

“When the whole nation is busy, those contract nurses who were floating from one place to another, they are not moving as much. They have been contracted out,” Blanchard said. “That was a resource that moved with the illness a bit.”

Strain on the health care system is also coming from directions other than COVID-19. Blanchard noted that during the first significant wave of transmission here in Northeast Mississippi, many patients experiencing illnesses other than COVID-19 delayed care because they wanted to avoid the hospitals.

Now, the impact of that delayed care has made itself felt. Just as COVID-19 patients are increasing again, other kinds of patients cannot delay care any longer, and they are sicker than they might otherwise have been.

“A huge part of this is the acuity in our emergency department of non-COVID patients is much higher than it’s been prior to covid,” Blanchard said.

In the summer, alarm over dwindling hospital space prompted Mississippi’s first-term Republican Gov. Tate Reeves to impose a statewide order requiring Mississippians to wear face coverings in public spaces, an action he had up to that point resisted. He let that order expire at the end of September and has since reverted back to his strategy of imposing targeted mask mandates in counties with the highest transmission rates.

But with trend lines again pointed toward a medical system under stress, Blanchard underscored the value he sees in a statewide mask order. He believes the decision to let the statewide mandate lapse led to increased transmission.

Noting that increased hospitalizations occurred within the NMHS about 11 days after the governor allowed his statewide mask mandate to elapse, Blanchard stressed his view that ongoing resistance in some quarters to masking is not productive and is exacerbating the impacts of the pandemic.

“We absolutely, unequivocally can deal with this disease if people would just wear a mask,” Blanchard said. “Masks are not about politics, and they are not about religion. They are about respecting other people. Somehow it’s become a political issue, and it’s not. It’s a medical issue and a respect issue.”

Medical professionals in the state, including Blanchard, have also attributed decreased transmission among Black Mississippians to the stronger adoption in that community of masking and social distancing.

Conversely, Blanchard noted that some white Mississippians appear to be taking their cue from figures who have downplayed or rejected the value of masking.

“We have a lot of leadership that especially resonates with the older Caucasian population in Mississippi during this sort of contentious political times that are choosing not to mask or social isolate,” Blanchard said.

On Monday, Dobbs hinted at support for another statewide mask mandate.

“I do think it was quite successful over the summer and if we think it will work again, I am for anything that works,” he said.

The Mississippi State Department of Health on Saturday reported 1,972 more cases of COVID-19, the largest single-day case count since July 30 …

Bon Appetit had a culture problem. She wants to change that

Merry music for the Christmas season