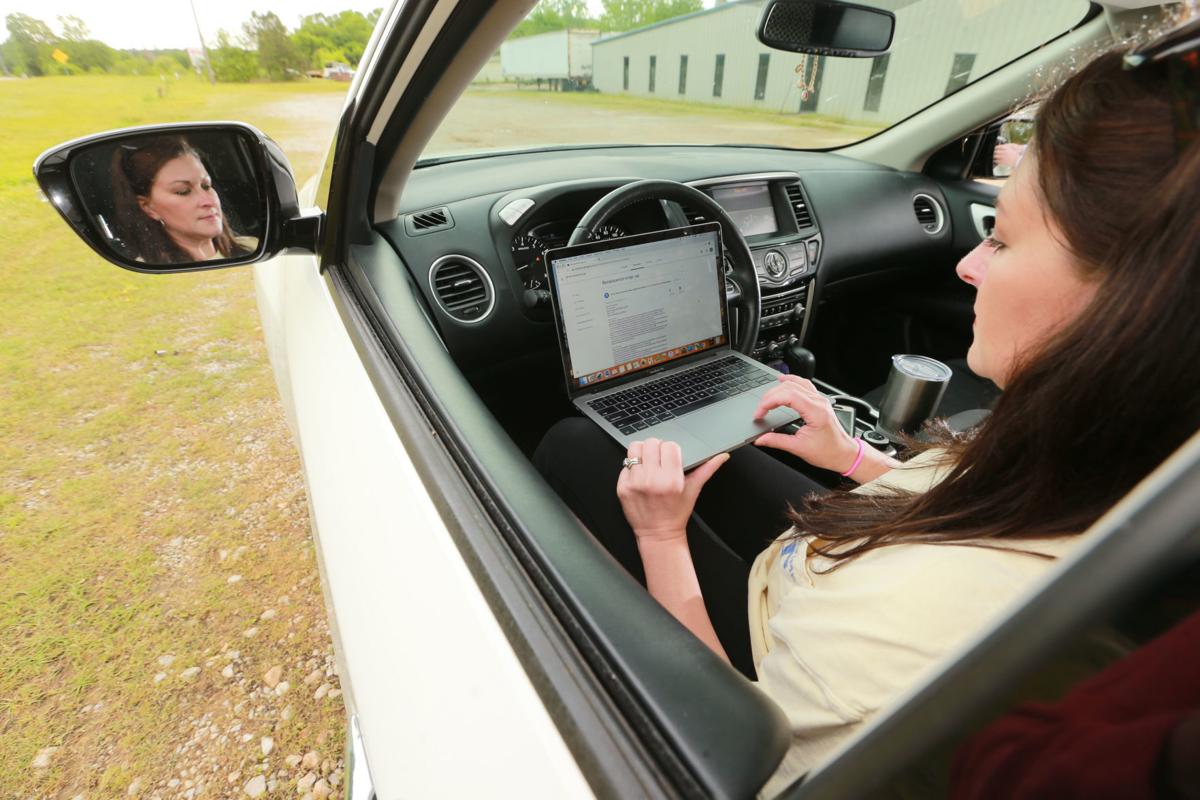 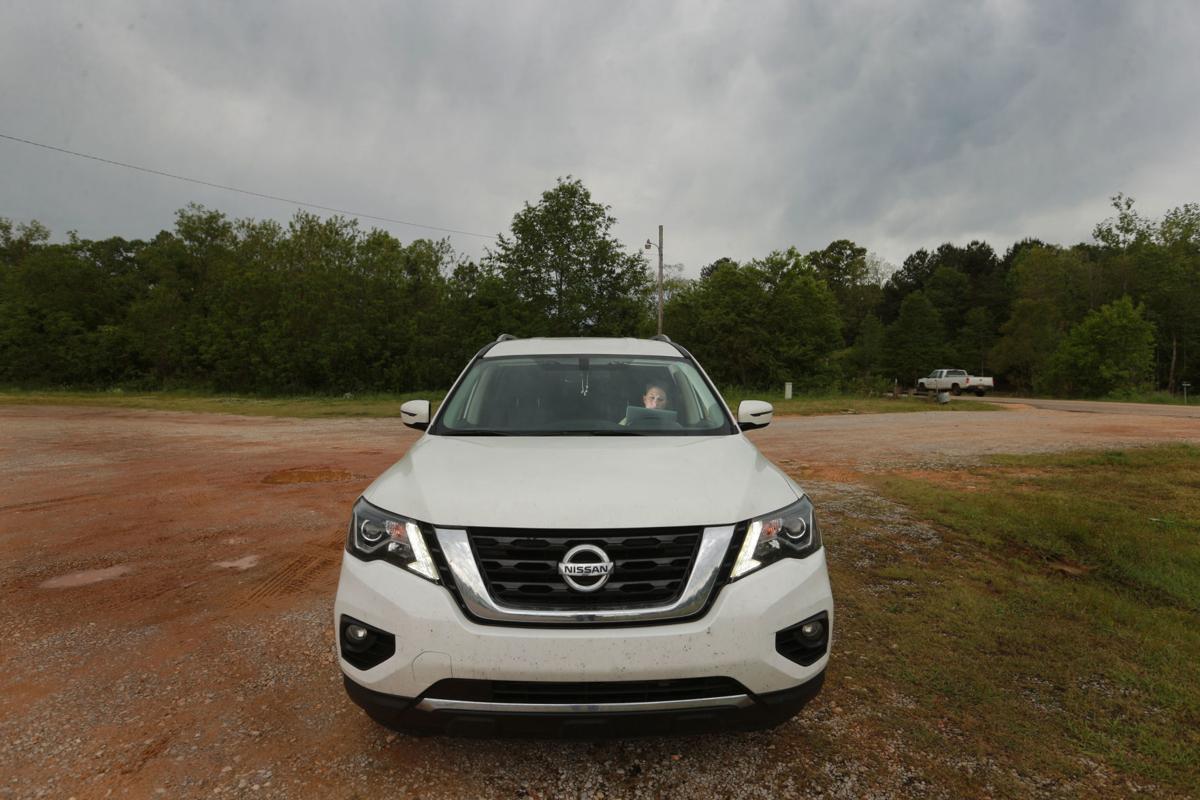 Tupelo High School teacher Anna Garner, who lives in Pontotoc, parks in a gravel lot so that she can upload videos for her students using a Wi-Fi hot spot on her phone. 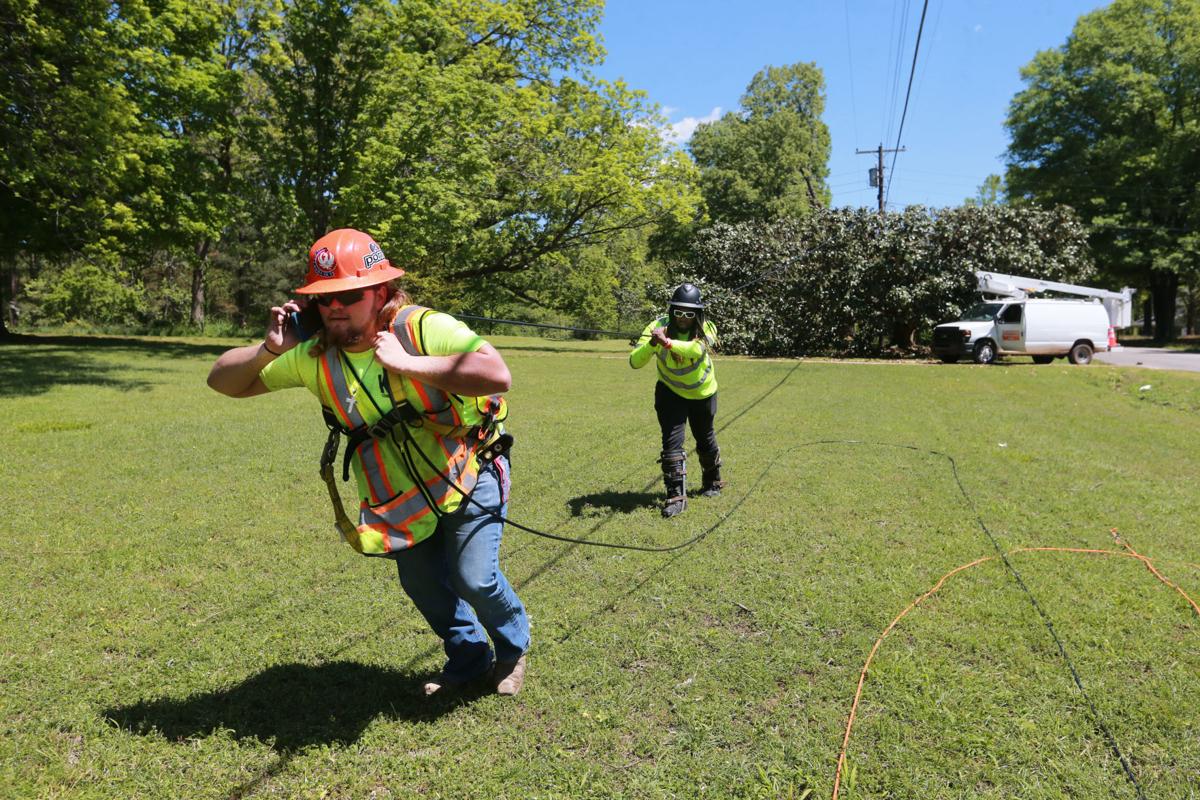 Case Curtiss, left, and Malcolm Patton begin pulling new a section of fiber line along West College Street in Booneville as they install the lines that will be used to provide fiber to the home internet. 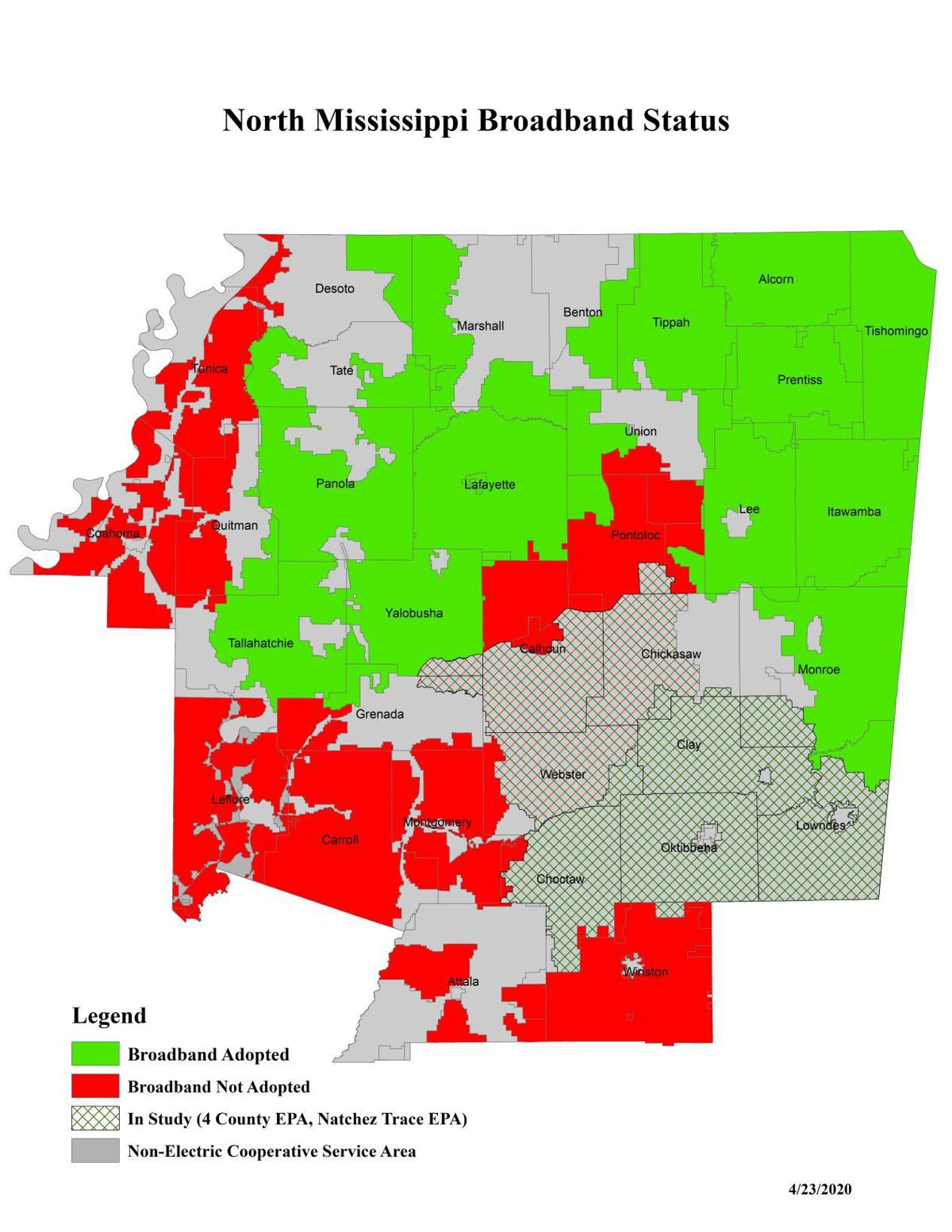 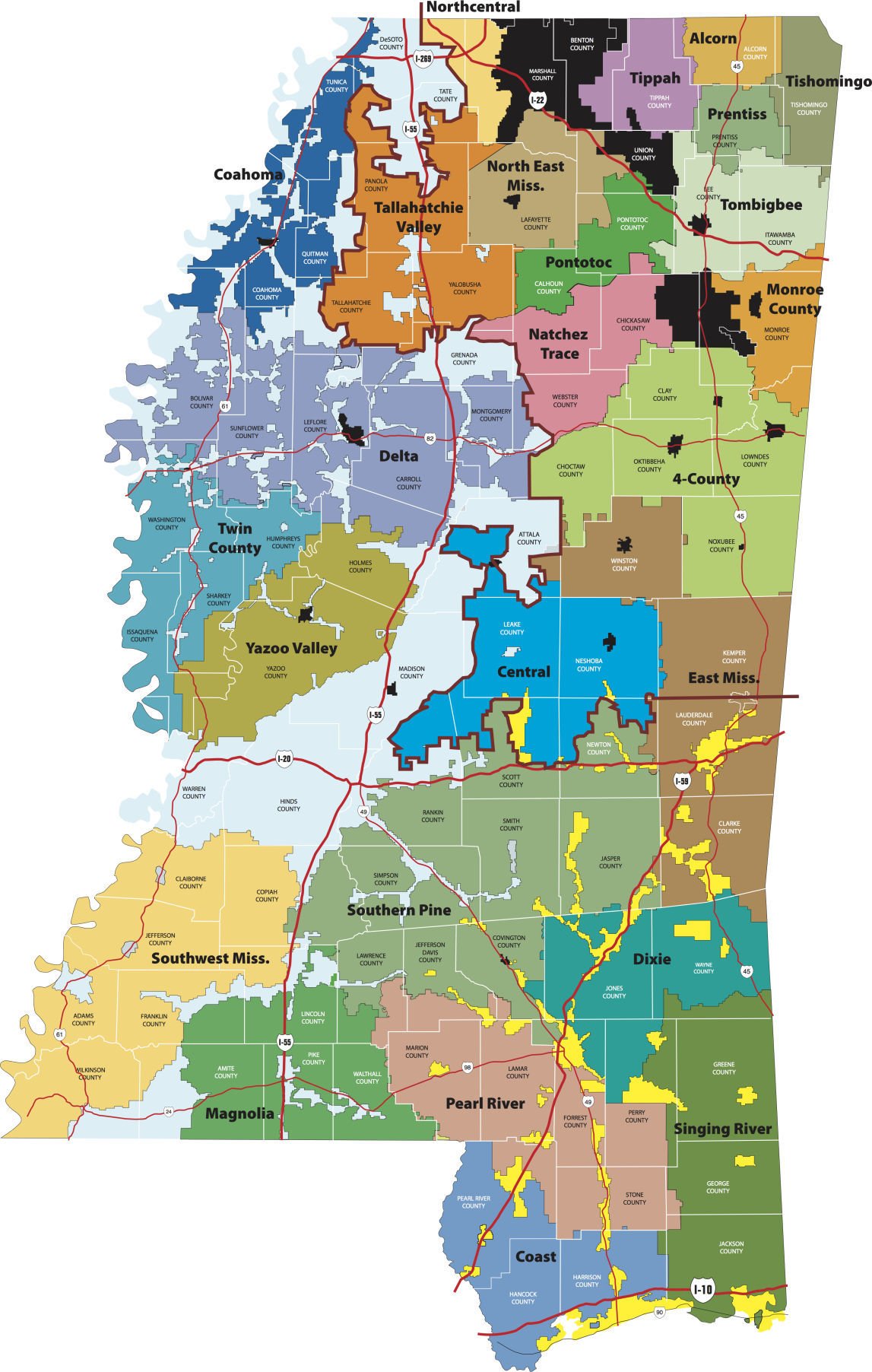 PONTOTOC • Anna Garner, a Tupelo High School art teacher, parks her car in a deserted gravel parking lot a couple of miles from her home in Pontotoc County and opens her laptop.

She doesn’t have access to broadband internet at her rural home and AT&T’s cellular service is poor in the area, so she travels to the lot once a week and uses her iPhone’s personal hotspot to connect her laptop to the internet for Zoom video chats with students.

The only work she can do from home is check emails, make phone calls and call in to participate in meetings that most other employees attend digitally via video chat. For everything else, she has to travel.

When Garner attempted to upload a 20-minute video lecture to YouTube for her art history class, it wouldn’t upload at her house. She went to her father’s home in the Pontotoc city limits and it took 24 hours to upload. The next time she had to upload a video, she went to her church, Wesley United Methodist Church in Tupelo, and the video uploaded in 10 minutes.

Garner said it’s “pretty frustrating” to have to drive 25 miles to her church building twice a week to upload videos, “but I have to have stuff ready for my students.”

Garner is one of approximately 368,000 Mississippians who do not have access to a wired form of broadband internet that meets the federal standard of basic speed, and her own electric power association (EPA) recently voted to reject a plan that would have allowed her future access to broadband.

Currently, Mississippi is under a statewide shelter-in-place mandate because of the COVID-19 pandemic and non-essential business and school buildings are temporarily closed. State officials have encouraged citizens to try and work from home as much as possible, but a lack of access to high-speed internet has forced some Mississippians to travel to conduct some tasks for work.

“We're telling our people, and rightfully so, to stay home and stay off the roads and do not congregate,” Northern District Public Service Commissioner Brandon Presley told the Daily Journal. “But then they're between the devil and the deep blue sea because they've got children that have got to do their homework and people have to work and telecommute. And guess what? They've got to go somewhere. So they congregate at McDonalds or at the WiFi hotspot at the library.”

However, Presley, a fourth-term Democratic commissioner, believes this speed is a “fictitiously low” standard that does not meet the modern needs of most Mississippians. The average internet speed in the state, according to the website, is 37.5 megabytes per second. Around 80% of Mississippians have access to internet speeds of 100 megabytes per second, a speed would allow a user to perform more activities.

These statistics mean that roughly 595,000 Mississippians do not have access to an internet speed with 100 megabytes or more.

Presley believes Northeast Mississippi, for the most part, is on a path to have most of its citizens connected to quality, affordable internet, but he also believes the state could do more to make this goal a reality.

In Alabama, state leaders have created the Alabama Broadband Accessibility Fund, a program that awards grants to internet providers based on a criteria of how much service they can provide to rural citizens.

Presley believes Mississippi could do a similar program to try and award grants and funds to broadband providers through a reverse auction type of system.

In 2019, state leaders worked on the issue in a bipartisan manner. When he was lieutenant governor and the leader of the Mississippi Senate, Republican Tate Reeves along with House Speaker Philip Gunn worked with Presley and supported the Mississippi Broadband Enabling Act, which allowed the state’s electric cooperatives to offer affordable broadband to rural areas.

Since then, all but one of the 12 EPAs that serve the Daily Journal’s coverage area have agreed to provide broadband service.

“I think as a state we have to spend a great deal of time thinking about what we can do to ensure that that connectivity is available in such a way that everyone hopefully will ultimately get access to it,” Reeves, now governor, said at a press conference last week. “We’ve got some resources in place now that hopefully we’ll be able to utilize to make that happen.”

Reeves did not list any specific details about what resources the state has in place to make this goal happen, but did say he has tasked his newly created Governor’s Commission on Economic Recovery with things Mississippians are experiencing now and turning them into positive outcomes, such as distancing learning for public schools.

“We’ve got a lot of smart folks out looking at it and thinking about it and are going to advise us on it,” Reeves said “While we’re dealing with the immediate impacts of where we find ourselves today, we can't be like other states and just focus on the here and now. We’ve got to think long term about how can we take this absolute lemon that we have been served and turn it into lemonade over the next 30 or 40 years.”

Since state leaders signed the bill into law into law last year, the Pontotoc EPA is the only association in Northeast Mississippi to decide not to provide broadband.

While some of the cooperatives are still looking at funding options, others have just started the construction process and five of the associations should be hooking up paying customers within the next few months.

The Tallahatchie Valley EPA based in Batesville was the first in the state to announce they would provide broadband and started constructing their network last September. General manager Brad Robison said they are roughly a third of the way through the first phase of a three-phase project. The first leg of their network is up and ready and they are in the process of installing it at houses.

“There has been a tremendous demand,” Robison said. “We are trying to ramp up the installation process. We will be sending out bills at the end of the week for the first paying customers.”

The Tombigbee EPA, which serves Lee and Itawamba counties, is not far behind. They are well underway installing fiber cables in their service area.

“We have a plan in place to offer broadband to all 44,000 members within four years,” general manager Bill Long said. “In the first year, we should be able to serve 15,000. We picked areas with density — Fulton, Saltillo and west Tupelo. We will be testing in April and May and hope to be able to hook up customers in late May and June along the main lines.”

Prentiss County EPA is testing the first portions of its network and is currently taking service applications online at www.prentissconnect.com, according to general manager Ronny Rowland.

“We’re getting real close,” Rowland said. “We've got a lot of the main line run between Booneville and Baldwyn. In those two areas, we have 100 signed up already. We started running the main lines in October and have 80-100 miles of cable up.”

The Alcorn County and Northeast Mississippi (Oxford) cooperatives are well into the construction of their fiber networks but are still several months away from being ready to hook customers.

Alcorn County EPA is testing the first phase that includes upload and download speeds as fast as 2 gigabits. They are about a month and a half away from providing service to paying customers, said internet coordinator Sean McGrath. They started in the more populated Corinth area and hope federal grant money will help them move quickly into more rural areas.

The Monroe, North Central (Byhalia), Tippah and Tishomingo EPAs are still in the early stages of design and should begin construction by late summer or early fall. They hope to be able to hook up customers before the end of the calendar year. Natchez Trace (Houston) and 4-County (Starkville) EPAs have agreed to move forward but are still in the planning stages. Both hope to secure funding from the Rural Digital Opportunity Fund.

A reverse auction by the FCC is planned in October to disburse more than $20 billion nationwide to provide broadband in rural areas. Around $490 million of that is earmarked for Mississippi projects.

Mississippi’s senior U.S. Sen. Roger Wicker (R-Tupelo) is the chairman of the powerful Committee on Commerce, Science, and Transportation. Infrastructure is one of the areas that falls under the jurisdiction of his committee.

He told the Daily Journal that he believes this pandemic will be the impetus for increased efforts to bring broadband access to rural areas. He said he has been in contact with the FCC recently on telephone service coverage maps that will be the indicator for how much grant funding states receive from the reverse auction in June.

“We’ll be back in session in early May,” Wicker said. “I expect one of the next phases of this coronavirus response will deal with infrastructure. You can rest assured that an infrastructure bill will not be enacted without broadband being a major portion.”

The reporters of the Northeast Mississippi Daily Journal live and work in communities throughout Northeast Mississippi and are on the front lines of what’s happening in the region. In order to produce this kind of journalism, we need your support. If you are not already a subscriber, please consider one today at djournal.com/subscribe.