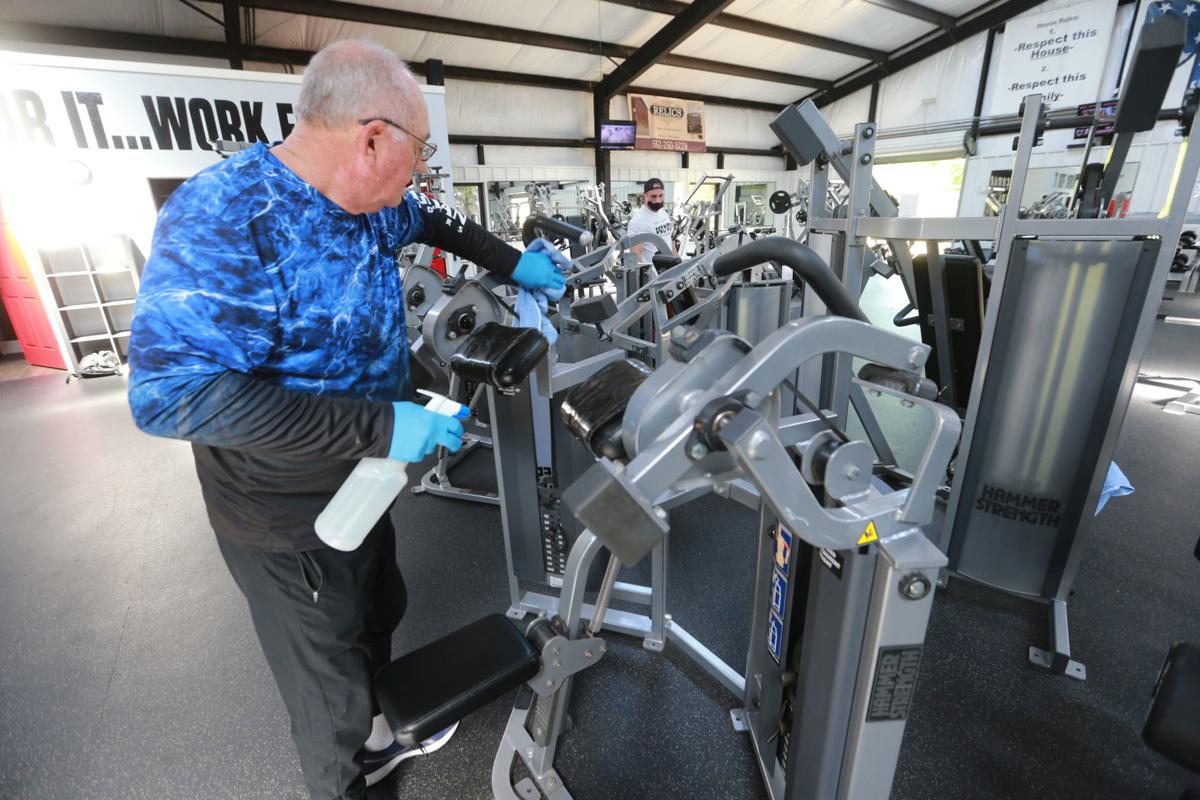 Phil Poe wipes down his machine before moving on to his next workout at Premiere Fitness Monday. 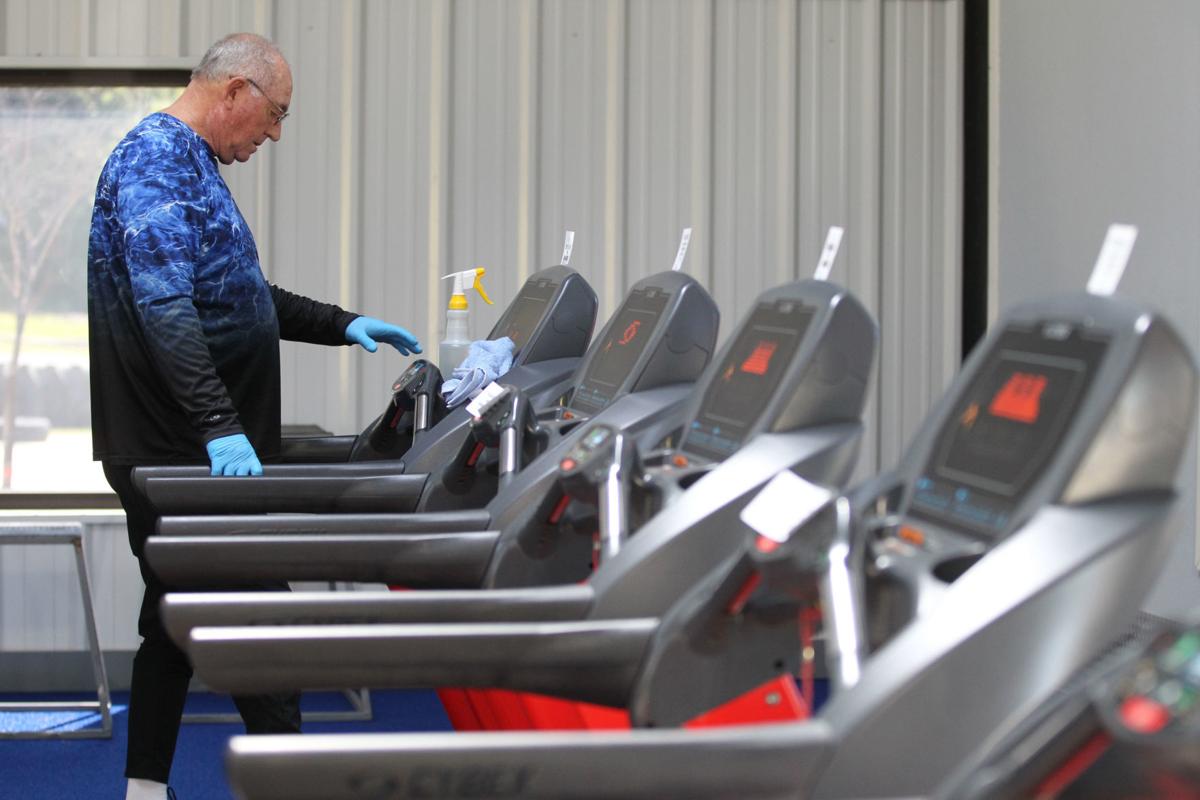 Phil Poe starts up his treadmill machine for the next phase of his workout at Premiere Fitness Monday as gyms have begun to reopen across the state. 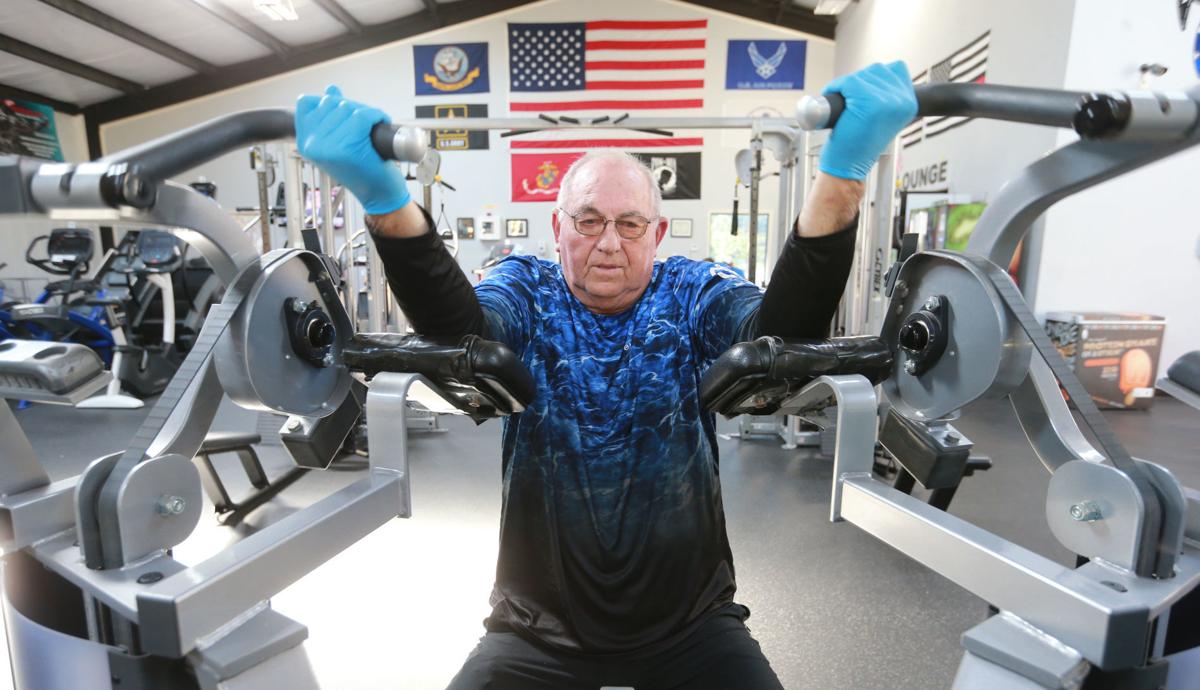 Phil Poe nearly has Premiere Fitness to himself Monday morning as he gets back to his workout routine. 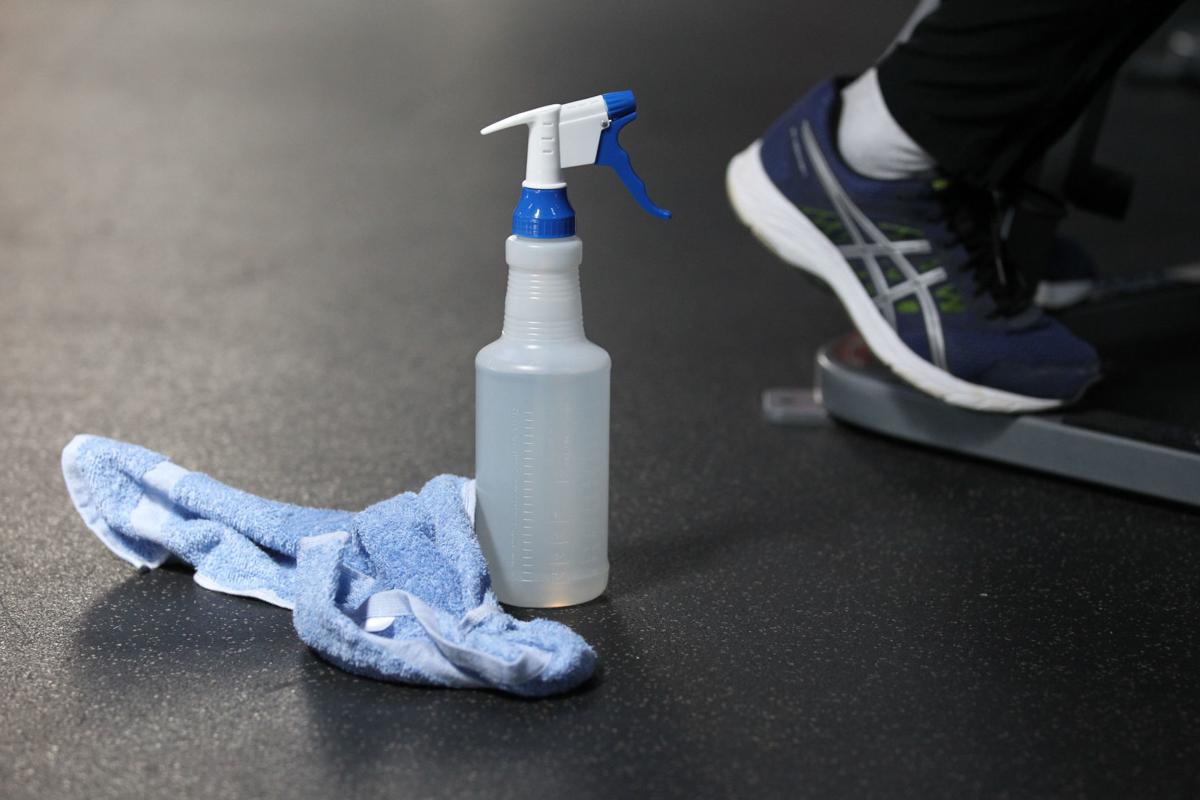 A botlle of santizer and a towl rest at the feet of Phil Poe so he can clean his fitness equipment at Premiere Fitness after he is done so the next person will be safe from COVID-19. 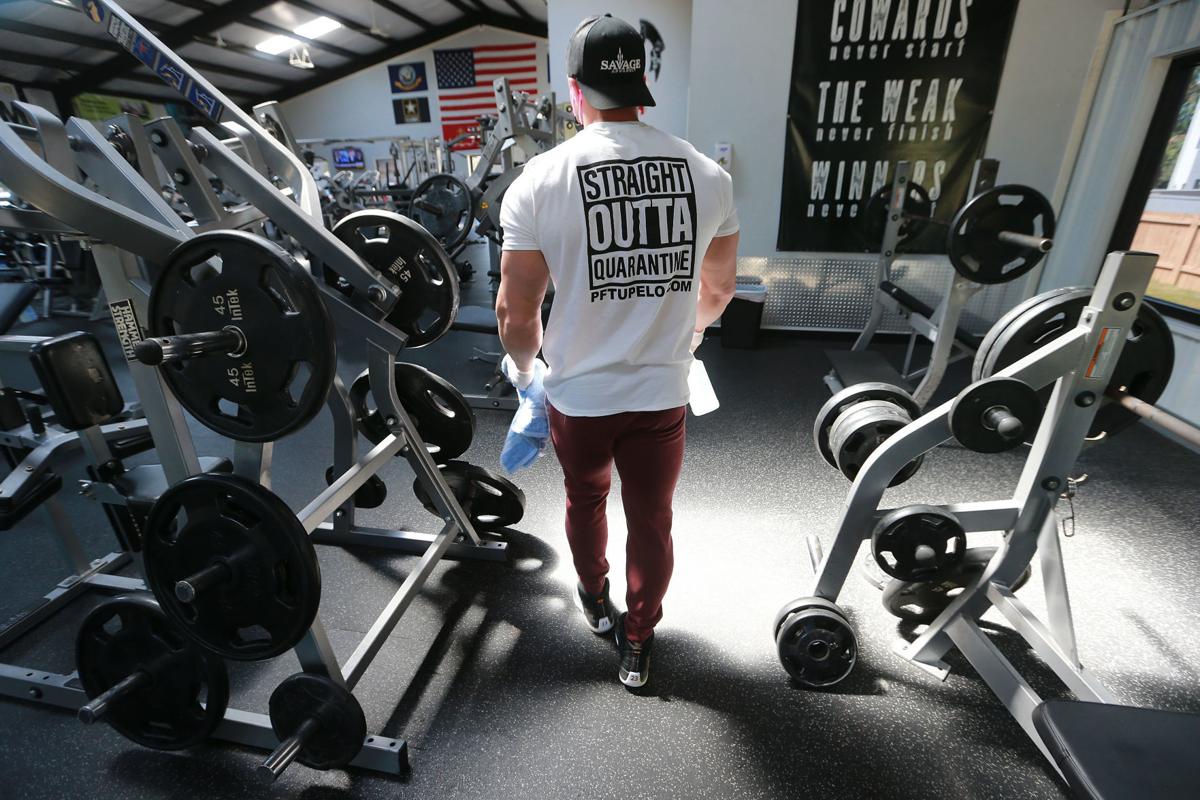 Jared Thompson prepares to sanitize a workout station while wearing a "Straight Outta Quarantine" shirt from Premiere Fitness in Tupelo. 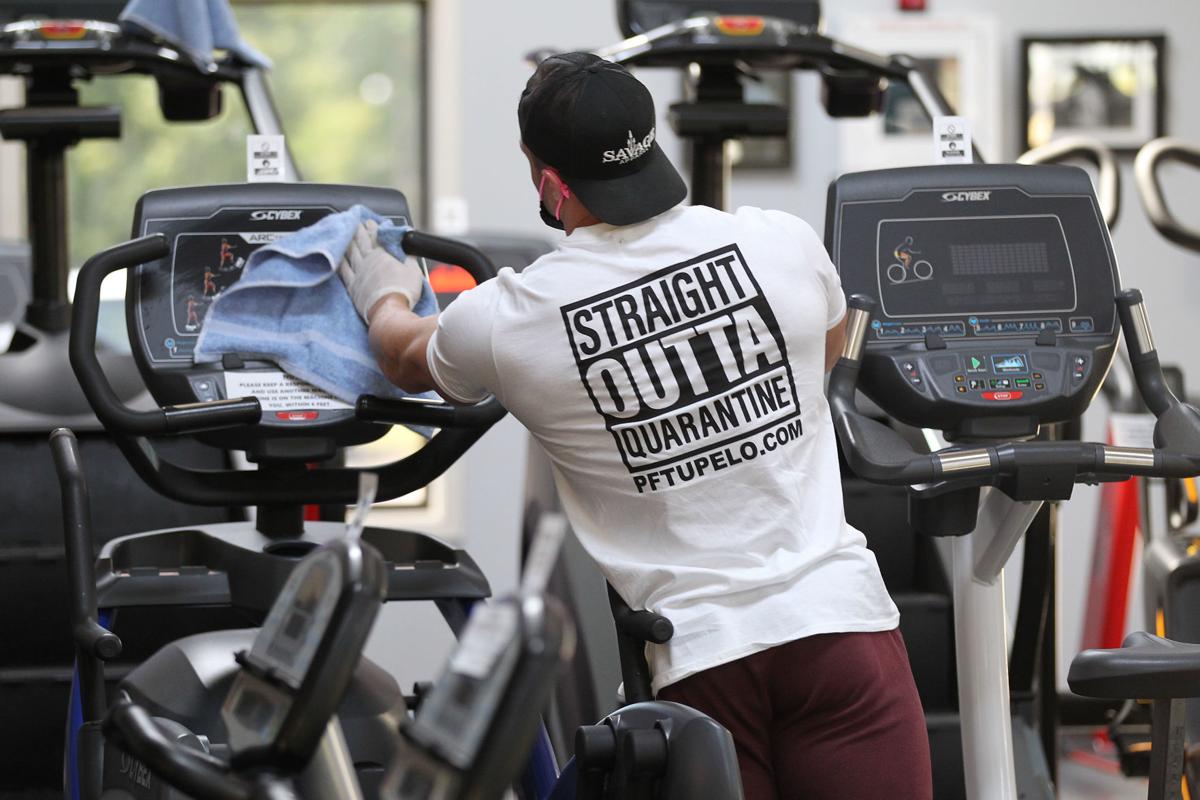 Jared Thompson prepares to sanitize a workout station while wearing a ‘Straight Outta Quarantine’ shirt from Premiere Fitness in Tupelo.

Phil Poe wipes down his machine before moving on to his next workout at Premiere Fitness Monday.

Phil Poe starts up his treadmill machine for the next phase of his workout at Premiere Fitness Monday as gyms have begun to reopen across the state.

Phil Poe nearly has Premiere Fitness to himself Monday morning as he gets back to his workout routine.

A botlle of santizer and a towl rest at the feet of Phil Poe so he can clean his fitness equipment at Premiere Fitness after he is done so the next person will be safe from COVID-19.

Jared Thompson prepares to sanitize a workout station while wearing a "Straight Outta Quarantine" shirt from Premiere Fitness in Tupelo.

Jared Thompson prepares to sanitize a workout station while wearing a ‘Straight Outta Quarantine’ shirt from Premiere Fitness in Tupelo.

But on Monday, the 75-year-old was back on this favorite piece of equipment at Premiere Athletix, where he goes at least three times a week.

“It’s really helped me, and being away from it makes you stiff and all stove up,” he said. “I really missed it. I was calling them every week asking when they’d open back up.”

Premier Fitness, like gyms and fitness centers across the state, was allowed to reopen Monday after weeks of being closed due to the coronavirus pandemic.

While owners Chris and Kristi Beckish had to endure closing the business, comprised of Premiere Athletix, Premiere Lady and Premiere Tan, they did manage to keep busy.

“It has been the longest seven weeks of our lives,” Chris said. “But what we have been doing is actually doing some projects around here.”

That included putting in new flooring with new paint and seal and adding baseboards.

Also a top-to-bottom cleaning on everything in the buildings – equipment and all – was done.

“We fogged the building yesterday, and we did touchups here and there and on the walls.”

It might have seemed to some as busy work, but it was work that needed to be done and had been long planned. But with several hundred members throughout the day, it’s hard to do. With plenty of time to work on those projects and nobody in the building, things moved more quickly.

“We were constantly cleaning, constantly wiping down things like the ceiling fan, or taking the covers off the treadmills cleaning then and dusting them. Just things that we could think of that needed to be done,” Chris said.

Under strict guidelines, gyms and fitness centers are open during certain times and with limited capacity. Regular cleaning and sanitizing is required as well.

“At least now we’re open and people can trickle in and out,” Chris said. “They can use the spray bottles we have all over the place. We’re not expecting a big rush; I think people are still kind of in a mode of waiting to see what happens and how this transpires over the next week or so.”

The seven weeks were challenging for the Beckishes, but they’ve gone through similar trials. In 2014, the tornado that swept across the city all but destroyed a new building they had being constructed for expansion. But they bounced back and have grown again.

“If we can bounce back from that, we can bounce back from this,” Chris said. “The thing is, this is a family-oriented business and we’ve come to know everybody so well that you start to miss people, and you miss the stories about their lives, their families and all they have going on. It’s been tough ... but now we’re having a bunch of family reunions. We haven’t seen each other in 7-8 weeks and a lot can happen.”

For Shannon Chrisman, having Premiere Lady reopen couldn’t have opened soon enough. Before the pandemic shut down all gyms and fitness centers, she worked out at least an hour and a half daily.

“I’d work out with a trainer, then do cardio,” she said. “Then I went into a shock when they closed.”

The workouts were therapeutic; Chrisman has back issues, and using a treadmill or elliptical, in addition to weights, provided relief.

“So I had to walk instead, and walking uphill hurt my back,” she said. “I’m just so glad I’m back to my routine. With all this going on it was all messed up ... it just changed my whole mindset when I heard they were reopening.”

Premiere Athletix will be open Monday-Friday from 6 a.m. to 9 p.m., while Premiere Lady will be open from 7 a.m. to 8 p.m., with the exception of Friday, when it closes at 4 p.m. Access will be available 9 a.m. to 3 p.m. at Athletix on Saturday.

The steam room and sauna at Lady will remain closed until further notice, and the Kidz Zone is open with a limit of eight kids.

Meanwhile, all safety measures and guidelines are posted throughout the facilities for employees and members to review.

“We’re going to do everything the guidelines tell us,” Chris Beckish said. “The main thing is to clean up and sanitize after using each piece of equipment, which we’re supposed to be doing anyway. We had a good thing going before all this happened, and felt like everything was sanitized ... we’re just thankful the governor allowed us and the salons to reopen. It’s good to be back.”

All gyms are expected to take every step necessary to implement the regulations, orders, and guidance from the Mississippi State Department of Health and CDC to prevent the spread of COVID-19.

Gyms must close to the public by 10 p.m. each day.

In addition to other gym staff, there must be at least one employee onsite during hours of operation dedicated to wiping down equipment after each use.

All high-touch areas must be sanitized at least once every two hours.

Exercise machines and equipment must be rearranged and.or deactivated to ensure at least 6 feet between customers.

Gyms must post signage at each entrance stating no customer with a fever or COVID-19 symptoms are allowed in.

Hand sanitizer must be placed at all entrances and throughout the gym floor.

All common areas must remain closed.

All employees will be screened daily at the beginning of their shifts, including asking whether they have been in contact with a confirmed case of COVID-19 in the past 14 days and have they had a fever in the last 48 hours.

Face coverings must be provided to all employees who come in direct contact with customers. Employees are required to wear that face covering throughout their shift and clean or replace daily.

All employees must be provided training on how to limit the spread of COVID-19.

Every employee on the gym floor must wear disposable gloves to be changed at least once an hour.

No more than 30% of the gym's maximum capacity. Gyms are encouraged to limit customers' time to a max of 1 hour per day.

Classes or group exercises are allowed with customers maintaining a minimum of a 6-foot distance apart.

Customers must sanitize their hands when entering and exiting the gym and when they move between equipment.