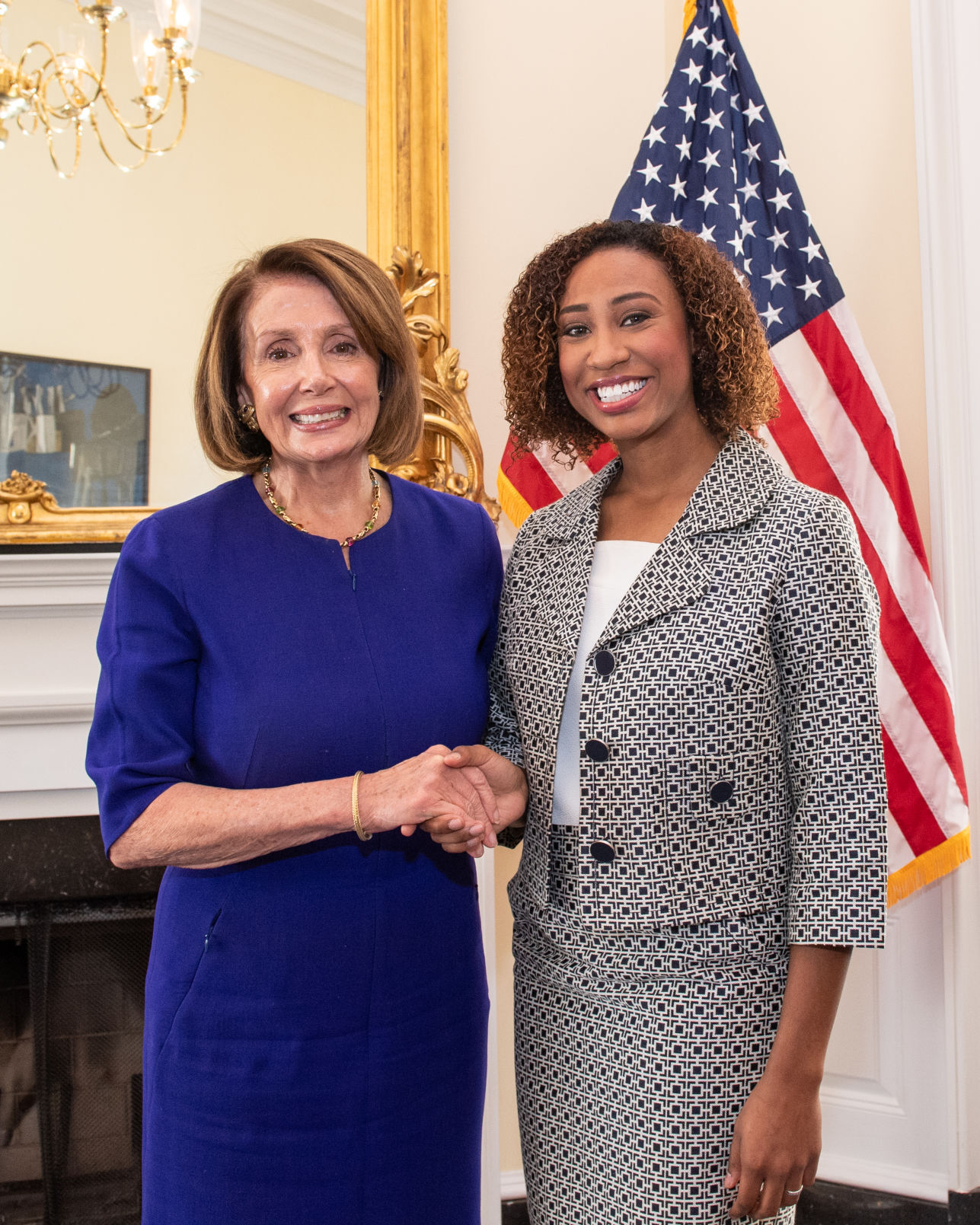 Alivia Roberts, right, of Shannon stands with then-House Minority Leader Nancy Pelosi for a photo during her internship in fall 2018 with the Democratic Policy and Communications Committee. Roberts has been a press assistant with the U.S. House of Representatives’ Energy and Commerce Committee since February 2019. 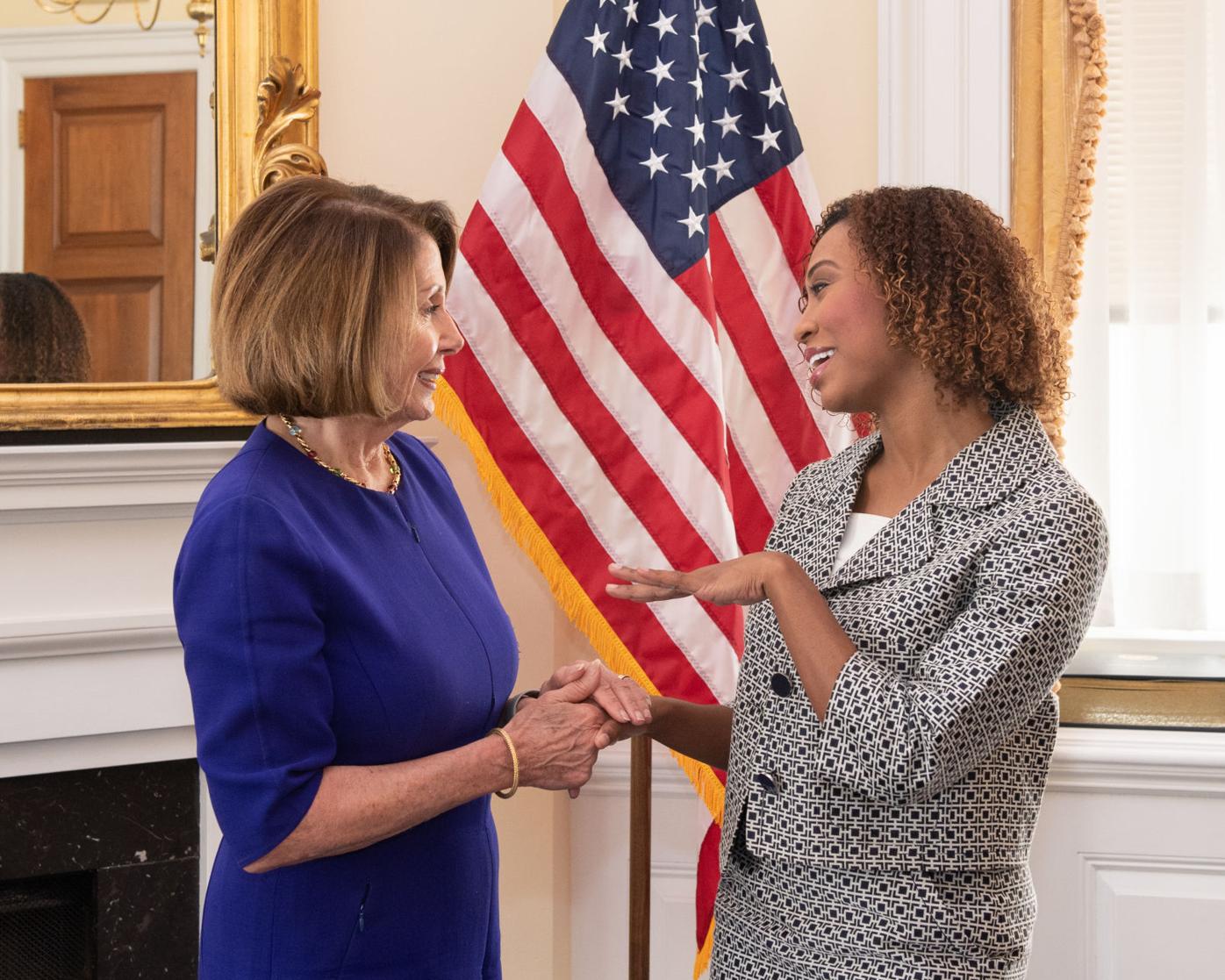 Alivia Roberts, right, of Shannon chats with then-House Minority Leader Nancy Pelosi during a photo op during her internship in fall 2018 with the Democratic Policy and Communications Committee. Roberts has been a press assistant with the U.S. House of Representatives’ Energy and Commerce Committee since February 2019.

Alivia Roberts, right, of Shannon stands with then-House Minority Leader Nancy Pelosi for a photo during her internship in fall 2018 with the Democratic Policy and Communications Committee. Roberts has been a press assistant with the U.S. House of Representatives’ Energy and Commerce Committee since February 2019.

Alivia Roberts, right, of Shannon chats with then-House Minority Leader Nancy Pelosi during a photo op during her internship in fall 2018 with the Democratic Policy and Communications Committee. Roberts has been a press assistant with the U.S. House of Representatives’ Energy and Commerce Committee since February 2019.

The House Committee on Energy and Commerce has the broadest jurisdiction of any committee in the U.S. Congress.

Anytime the committee or one of its subcommittees holds a hearing or acts on proposed legislation, its press staff relays the work to the media and the public. Among those getting the word out is Alivia Roberts, a Shannon High School and Mississippi State graduate who serves as a press assistant.

“I really enjoy the idea of it having such a broad jurisdiction and a lot of the main legislation that’s impacting Americans,” Roberts said in a telephone interview after drafting a press release Monday. “For example, health care. We had several key provisions in the CARES Act and the Heroes Act.”

Roberts, who has been with the committee press staff since February 2019, has been working from her D.C. residence due to the coronavirus pandemic.

“We’re working from home,” she said. “I haven’t been in the office since March. We’ve adjusted to the new way of having hearings and markups. It’s different. I’m kind of over it, but I’d rather stay safe.”

Roberts, who received her Bachelors in Broadcast and Public Relations at Mississippi State in 2018, has been in the nation’s capital for two years. She came to D.C. to attend George Washington University to earn her MPA in Politics, Policy and Communication.

“We have three other press secretaries who divide up the subcommittees, and I assist with all of them,” she said. “When extra hands are needed, that’s where I play a role. I do help a little more on the digital communications side with our digital directors – drafting Facebook posts, Tweets, graphics, videos of hearings, social packets.”

In addition to having the largest jurisdiction, the House Energy and Commerce Committee is one of the oldest on Capitol Hill. The committee is chaired Rep. Frank Pallone (D-New Jersey) and the ranking Republican is Rep. Greg Walden (Oregon).

“If there’s a way for me to be involved on the Hill within policy and communicating that policy, the Energy and Commerce Committee was definitely one of my top choices when I was searching for a full-time position,” she said.

Roberts did an internship between August-December 2018, her first semester at George Washington, through the Congressional Black Caucus. She was placed in the House Democratic Policy and Communications Committee, which worked under the leadership of Rep. Nancy Pelosi, then the House Minority Leader. Pelosi regained the House speakership the following January.

Graduate school at George Washington was an opportunity for Roberts to grow professionally, she said.

“The program is very versatile,” she said. “They allow you to intern or work full time in the area that you’re studying, so that attracted me to George Washington, in particular. After my first semester interning, I then decided to see if I could handle a full-time job. That’s where I looked at Energy and Commerce. A lot of the courses I took play an integral role in helping me understand what I was doing. The lessons I was learning in class, I was able to apply them to my everday work.”

Roberts, who was involved in 4-H while growing up in Shannon, said she took numerous trips to Washington, D.C., to accept awards and represent Mississippi.

“I would say 4-H is the reason that I ended up in D.C because I visited it so many times to receive my Congressional medals, and I would constantly be around others who were former members of 4-H who were successful in excelling in D.C.”

Another pathway for Roberts to D.C. has been pageants. Roberts competed in the Miss Mississippi/Miss America system from junior high to college. She competed in the 2019 Miss D.C. Pageant and plans to compete again in 2021.

“While I was in D.C., I met another fellow Mississippian who was involved in the Miss American Organization,” she said. “I remember calling my mom after that meeting saying I found my niche and I want to come to D.C. That’s been a dream and a goal since early high school, to end up in D.C.”