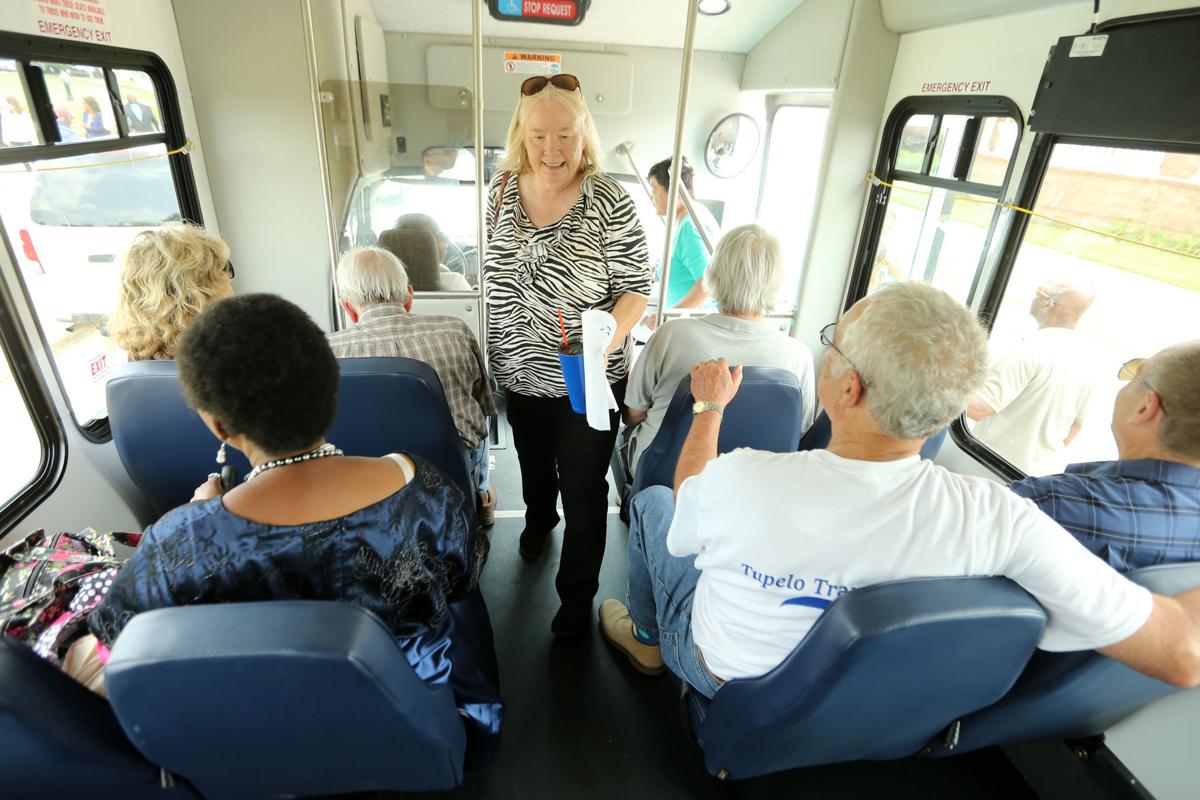 Sherry Nelson, an employee and driver with Northeast Mississippi Community Services, boards one of the Tupelo Transit Buses for a ride. Ridership is up this month following the service’s change to on demand for the public, but its future is still in doubt. 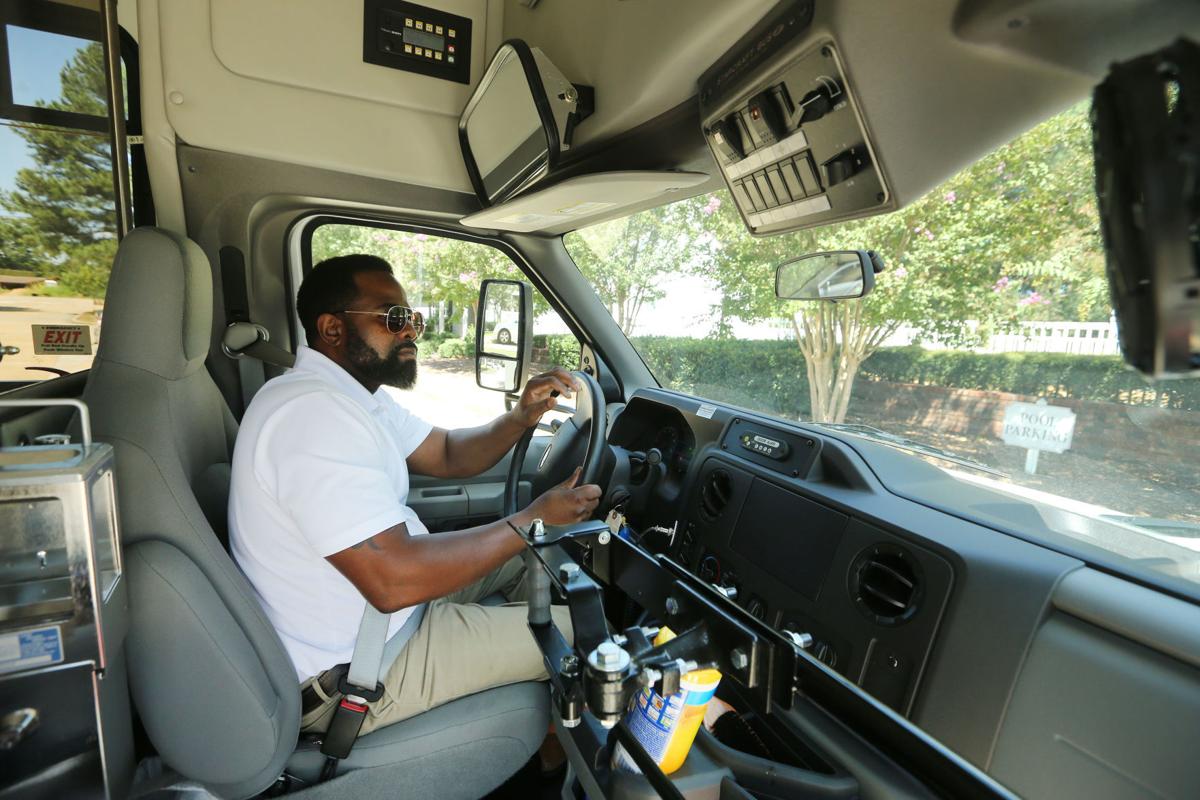 Mickey Holland, a driver for Tupelo Transit, drives through The Pines Apartment Complex, a stop on his Blue Line route, last year during the start of the city’s public transportation program. The fixed routes have been discontinued in favor of on-demand service for the public.

Sherry Nelson, an employee and driver with Northeast Mississippi Community Services, boards one of the Tupelo Transit Buses for a ride. Ridership is up this month following the service’s change to on demand for the public, but its future is still in doubt.

Mickey Holland, a driver for Tupelo Transit, drives through The Pines Apartment Complex, a stop on his Blue Line route, last year during the start of the city’s public transportation program. The fixed routes have been discontinued in favor of on-demand service for the public.

TUPELO • Ahead of budget hearings next week, officials on Tuesday released the latest ridership numbers for the city’s public transportation system, with data showing a slight uptick in riders for July though a months-long trend of relatively flat numbers remains unchanged.

The Tupelo City Council convened a work session and heard the latest numbers, which come as the city revamped in July how the transportation system works.

Steve Gaines, the executive director of Northeast Mississippi Community Services, Inc., discussed numbers from October 2018 to July 2019. He predicted the numbers would increase in the upcoming months, but would eventually flatten out.

“I’m going to say around 2,000 (riders) a month is what it will flatten out at for right now,” Gaines said.

The organization that Gaines leads operates Tupelo’s transit system on a contract basis.

Gaines said he believes the transportation system would reach the 2,000 a month mark in about two to three months.

For the month of July, 1,484 people used the public transit system. July was the first month to operate under a fully on-demand system, allowing any Tupelo resident to request pickup by a city bus at home.

The July numbers fell short of the high-water mark for ridership, which came in February when 1,545 rode public buses.

Gaines estimates that 1,700 people will ride the system in August, which would make August the highest-ridership month to date since the program’s inception.

Previously, the city had a fixed route system with different bus stops posted throughout the city. The system operated on a continuous loop. In addition to the route system, the city also had a “paratransit” system that allowed elderly or disabled citizens to be picked up from their home by calling the transportation office 48 hours in advance.

Since the change, some city council members were critical of the fixed route system and voiced skepticism of public transportation.

“You see our big buses going through the city,” Ward 5 Councilman Buddy Palmer previously said. “They look beautiful, but they don’t have anyone on them.”

Gaines presented the council with two different renewal options for the transportation system.

The first option would allow buses to be on demand for transportation services Monday through Sunday, which would cost $394,520. The program would receive some assistance from the Mississippi Department of Transportation, which would leave the city paying $183,960 for the next fiscal year.

The second option would have transportation vehicles being on demand Monday through Friday and would cost $338,512, with the city paying $155,956 for this next fiscal year.

“No. Paratransit has to come in conjunction with a fixed route or a system open to the general public,” Gaines said.

Ward 6 Councilman Mike Bryan later told The Daily Journal he was also planning to explore questions about the paratransit system. Bryan has been against public transportation since it was first brought before the council, but has supported paratransit.

“I’ve got to crunch the numbers and decide how to vote,” Bryan said. “It was my understanding we couldn’t just do the paratransit separately.”

On the other hand, Ward 4 Councilwoman Nettie Davis said she supports the program and wants to see it continue.

“I support this 100 percent,” Davis said. “I’ve been pushing for transit since it began.”

Mayor Jason Shelton was absent from the meeting because of visiting Elvis festivals in Germany and Norway. Don Lewis, the city’s chief operations officer, told the council the mayor’s administration has not reached a decision on public transportation, but would inform council members of his decision when he returns.

In previous interviews with the Daily Journal, Shelton has indicated he would like to see the public transportation system renewed.

The current transportation program is a pilot program that council members will have the option to renew or discontinue. If the city chooses not to fund the program in the city budget, public transportation will end on Sept. 30. City officials are set to begin budget hearings next week on Thursday, Aug. 22.

The search for two members of Kennedy family