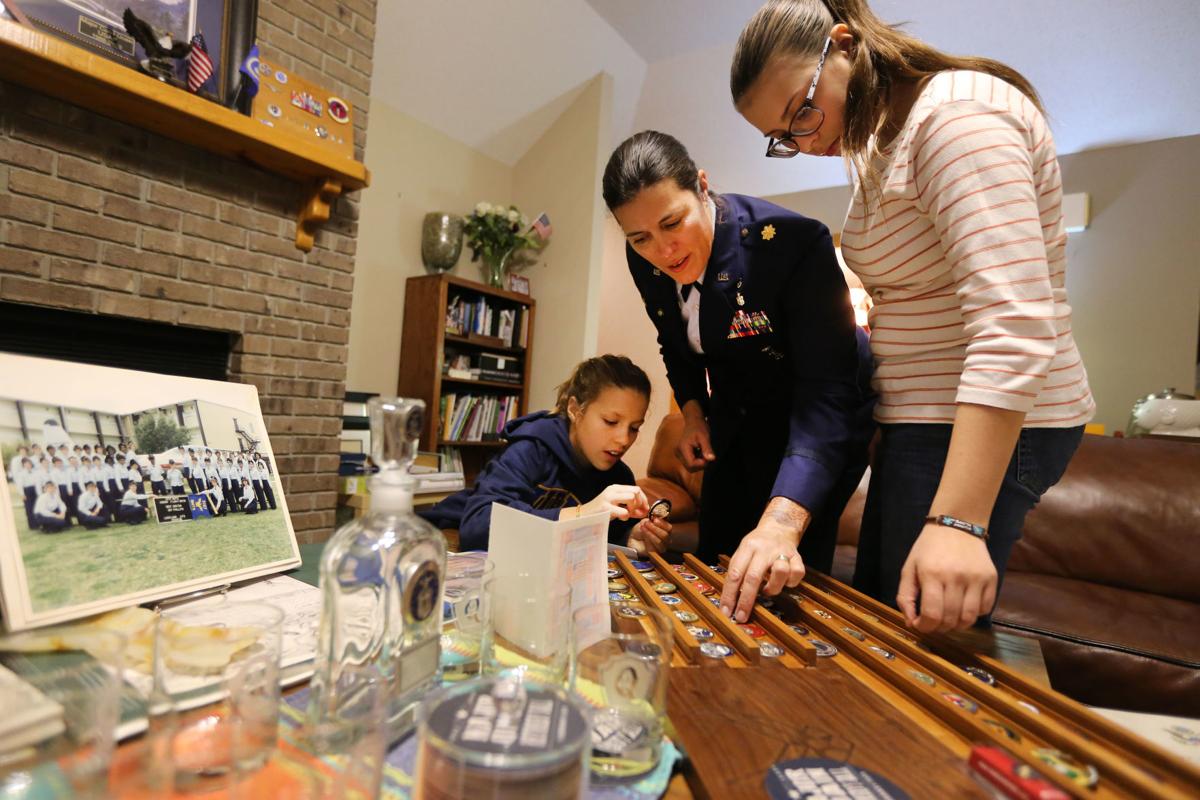 Major Carol Quain, center, and her daughters, from left, Isabella Kelly, 11, and Gabriela Kelly, 13, look over a collection of coins Quain earned during her time in the Air Force. Quain retired Nov. 15 and is settling down with her daughters and husband Remi in Tupelo. 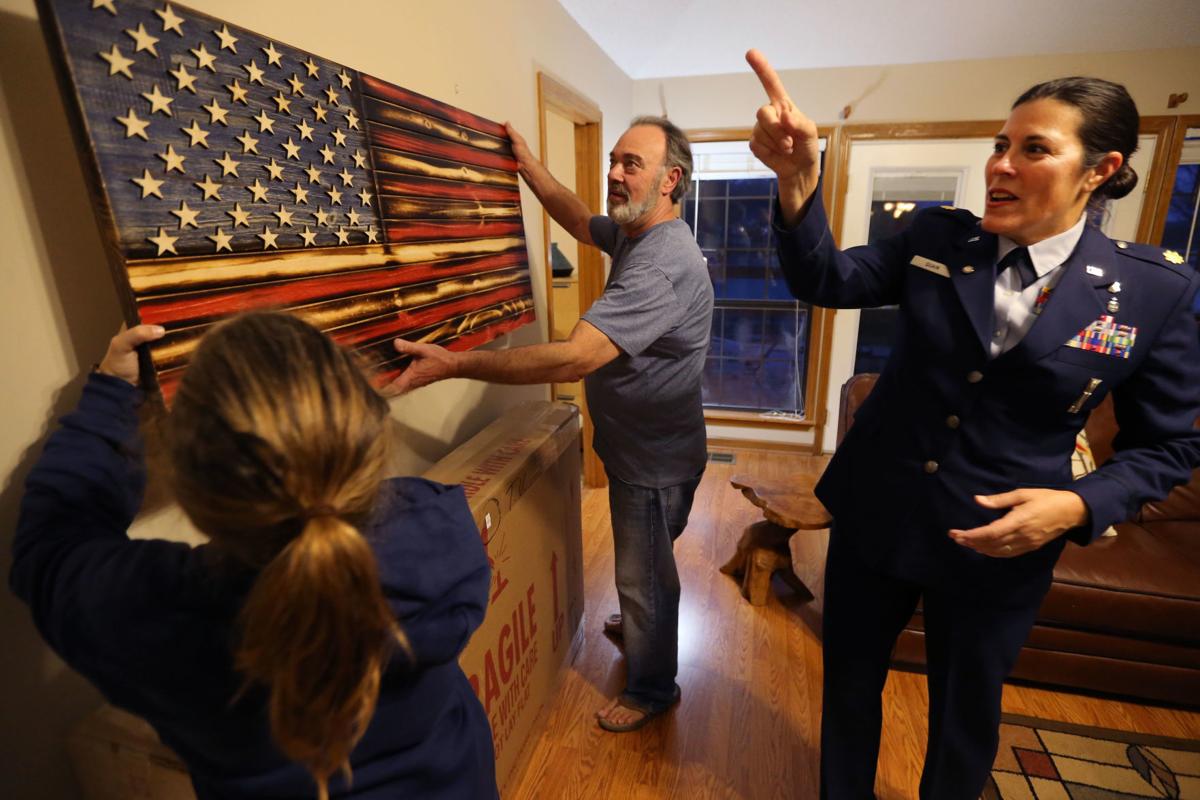 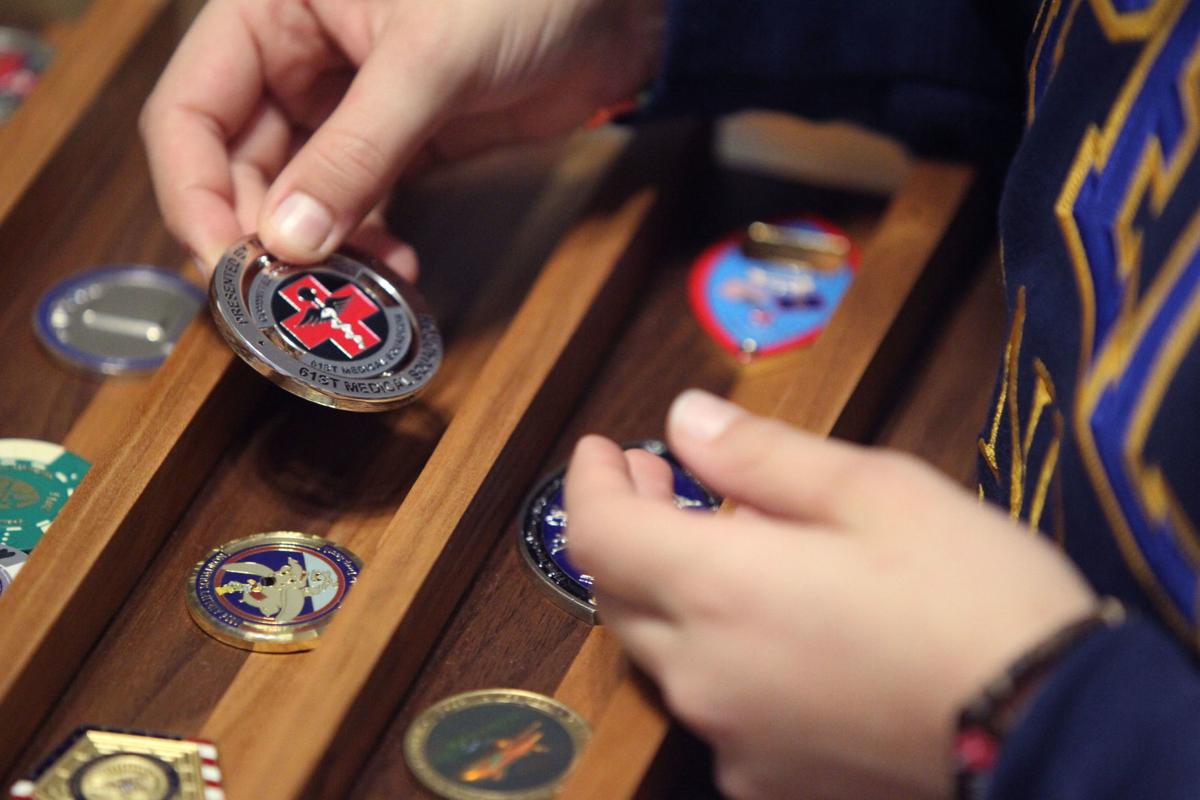 Major Carol Quain, daughter Isabella Kelly, 11, looks over a collection of coins her mother earned during her time in the Air Force. Quain retired November 15 and is settling down with her two daughters and husband Remi in Tupelo. 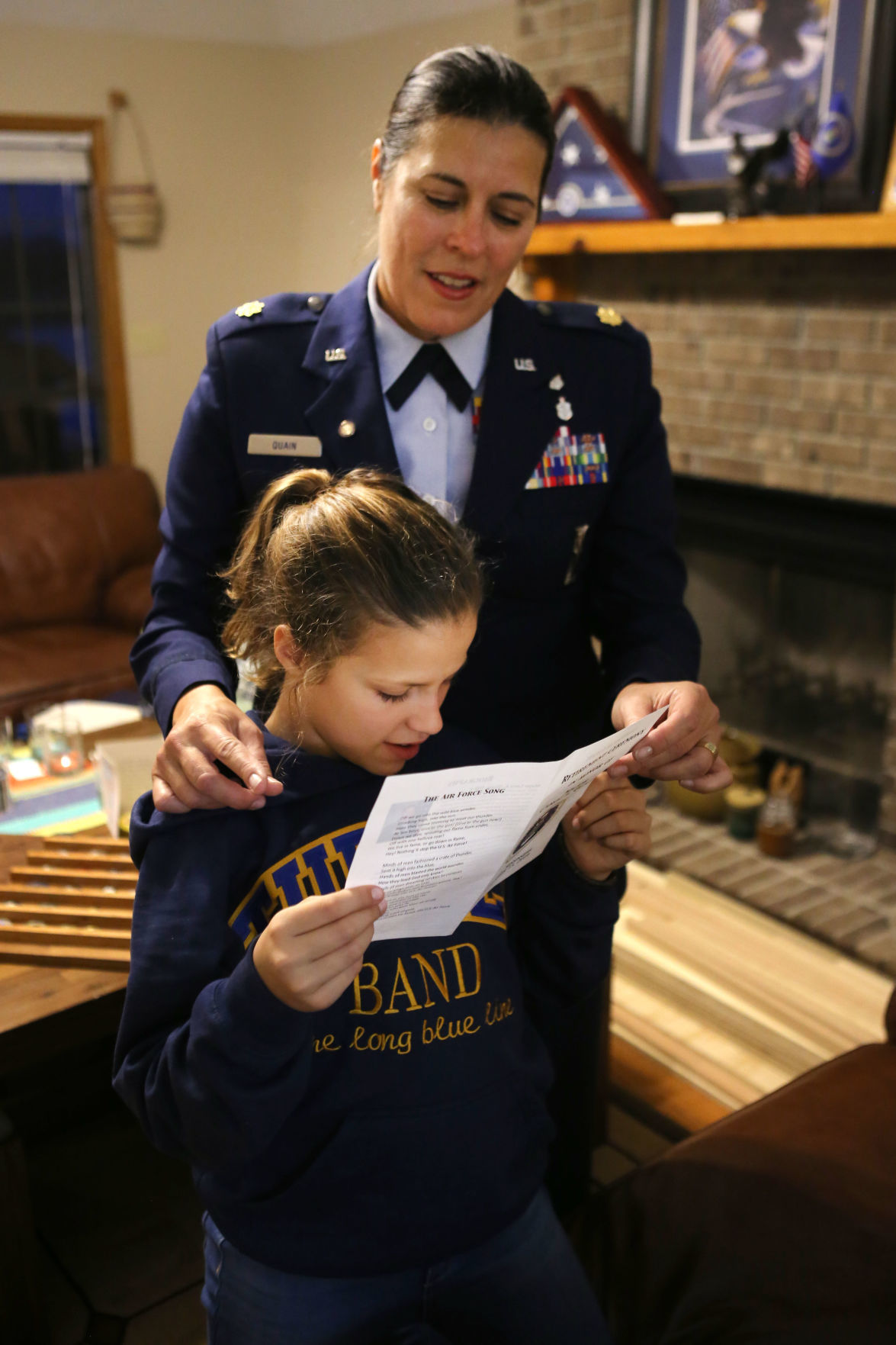 Major Carol Quain, center, and her daughter Isabella Kelly, 11, look over the program from Quain’s retirement ceremony organized by her family in Tupelo. 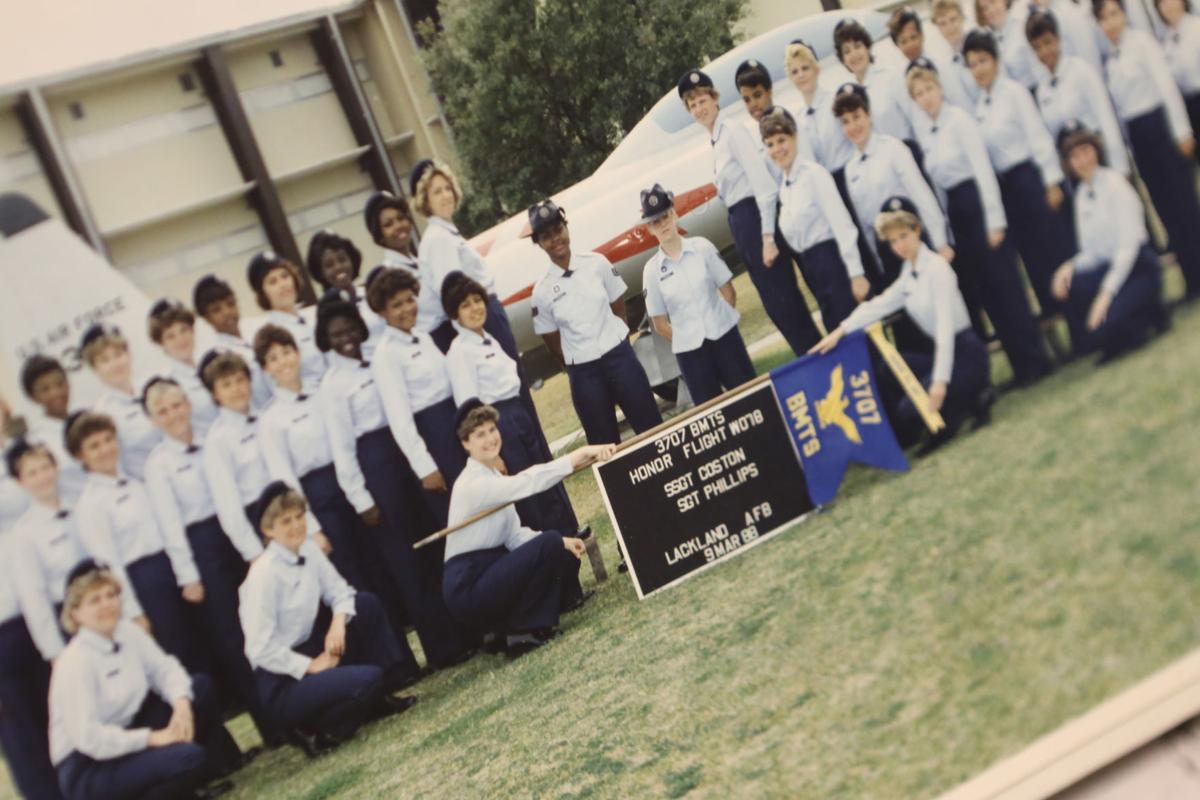 Major Carol Quain, center, and her daughters, from left, Isabella Kelly, 11, and Gabriela Kelly, 13, look over a collection of coins Quain earned during her time in the Air Force. Quain retired Nov. 15 and is settling down with her daughters and husband Remi in Tupelo.

Major Carol Quain, daughter Isabella Kelly, 11, looks over a collection of coins her mother earned during her time in the Air Force. Quain retired November 15 and is settling down with her two daughters and husband Remi in Tupelo.

Major Carol Quain, center, and her daughter Isabella Kelly, 11, look over the program from Quain’s retirement ceremony organized by her family in Tupelo.

TUPELO • Major Carol Quain’s Air Force career took her from maintenance technician to nurse practitioner and to the other side of the world.

“It took me 32 years on a meandering road to get a 20-year retirement and a 23-year pension,” said Quain, who is settling into civilian life with her husband Remi and daughters Gabriela and Isabella Kelly in West Tupelo.

Her career took her through the total force of the U.S. Air Force, serving as active duty, Air Force Reserves and the Air National Guard. In her final assignment, she was stationed in the clinic serving the Space and Missile Systems Center that is a part of the Air Force Space Command.

Quain’s service grew out of family ties and so has her retirement.

Her father, Thomas Mann, who grew up in the Brewer community, was a career Air Force officer who retired as a senior master sergeant. Quain, her brother Thomas Mann Jr. and sister Connie Renfroe, grew up on Air Force bases around the world. Both Quain and her brother continued the legacy of Air Force Services.

With her father in Saltillo, her mother Anna Mann and sister Connie in Tupelo, it was a natural choice for the Quain family to settle into post-Air Force life here.

Her family pulled out the stops with a retirement ceremony in Tupelo earlier this month, celebrating her 20 years of active duty, both as an enlisted member and an officer, and six years in the reserves.

“It was better than any retirement ceremony I’ve ever been to,” Quain said.

Quain is trying to get into the rhythm of civilian life, like getting her daughters to school on time. She’s looking forward to spending Thanksgiving with family and listening to her younger daughter play with the Milam Elementary Band.

“I want to get in there with my girls,” Quain said. “We’re so blessed that now we can develop relationships” with the rest of the extended family.

Quain was actually living in Germany in 1988 when she enlisted in the U.S. Air Force. She had previously completed an associate’s degree in data processing at what was then Itawamba Junior College and excelled in electronics. Quain ended up working as a technician maintaining communications equipment in missile silos in South Dakota.

Six and a half years after her enlistment, disarmament talks led to the decommissioning of the missiles. Her job was phased out with the Minute Man missiles and she elected to leave the Air Force.

Ironically, Quain earned her wings as a civilian, becoming a United Airlines flight attendant based out of New York City. But she couldn’t completely leave the service behind and joined the Air Force Reserves in 2001.

“I loved what I was doing, but it wasn’t as fulfilling,” Quain said. “My sister Connie encouraged me to consider nursing and I enlisted as a medical technician.”

Then Sept. 11 happened. Quain had left La Guardia Airport, working on a flight headed to California, just like the two hijacked United flights.

“My family thought I was on one of those planes,” Quain said. “It took me a good 10 hours to be able to communicate with them.”

In the aftermath of Sept. 11, Quain was furloughed by United Airlines and opted to pursue a nursing degree at Itawamba Community College. She was able to transfer her reserve service to the Air National Guard medical unit in Jackson. She started working in the North Mississippi Medical Center emergency department while in nursing school and continued after graduation, working nights on the orthopedic floor.

She was deployed as part of the response to Hurricane Katrina, but worked primarily in Jackson because she was pregnant with her older daughter at the time.

After earning her bachelor’s of nursing degree, she decided go back to the Air Force in 2007.

“I took a leap of faith,” Quain said.

Generally, the armed forces don’t accept people after the age of 35, but Quain’s prior service and the need for nurses weighed in her favor.

“I had to lose 20 pounds,” Quain said, but the work ethic and experiences of her prior enlistment served her well during officer training.

She worked as a clinical nurse at Hill Air Force Base in Utah before answering the Air Force’s call to become a nurse practitioner. Based on her background and test scores, Quain was selected to attend the Uniformed Services University in Bethesda, Maryland.

“It’s considered one of the top five medical schools in the country,” Quain said. “The experiences were quite unique.”

The three years in Guam were special both professionally and personally. She enjoyed taking care of the Air Force personnel and their families. Her condo was on the beach.

She also met British project manager Remi Quain, who was working on a Navy construction project in 2014. He lived in the same complex as Quain and her daughters.

“Neither of us expected to marry,” but they took the leap in 2017, Quain said.

Quain is proud of her military service, but it did come with sacrifices.

“You get calls in the middle of the night; I had two months of training in Texas while my family was in Guam,” Quain said. “It doesn’t mean you don’t love your family, but the job comes first.”

The burdens of service took a toll on two marriages. She missed her brother’s weddings and holidays.

Her girls have moved across the country and around the world.

“They did very well and they’re very resilient,” Quain said. “The biggest hurdle was seeing the back of me all the time.”

Her daughters had to understand that mom couldn’t always make it to school events and concerts. Fortunately, she had two good friends and a nanny who backed her up in Guam.

Being in Tupelo has been a joy. Instead of having just one person at her first band performance, daughter Isabella was over the moon to have five family members in attendance, Quain said.

“She was so touched to have them all there,” Quain said.

Clyburn: 'Don't know' if SC will be Biden firewall