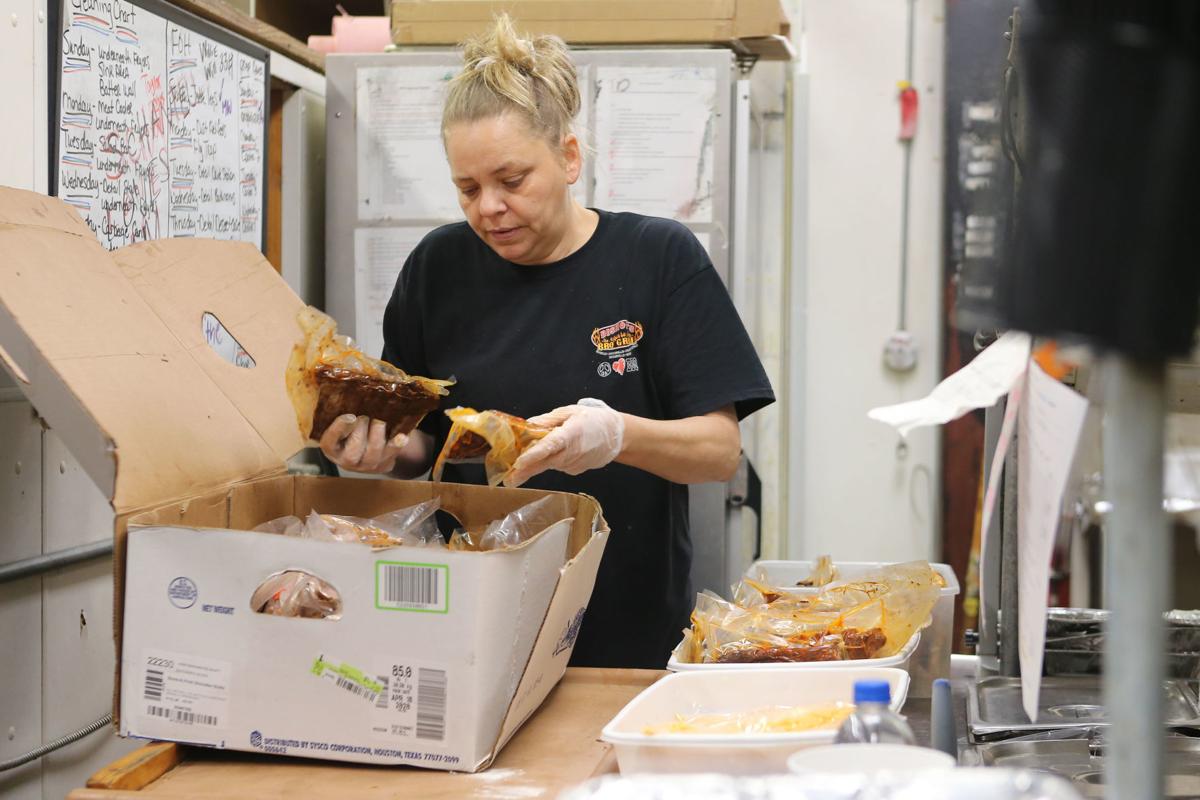 Pam Robbins, General Manager at Bishop’s BBQ, stocks pulled pork in the kitchen of the McCullough Blvd store in Tupelo as she helps prepare for lunch on Thursday. 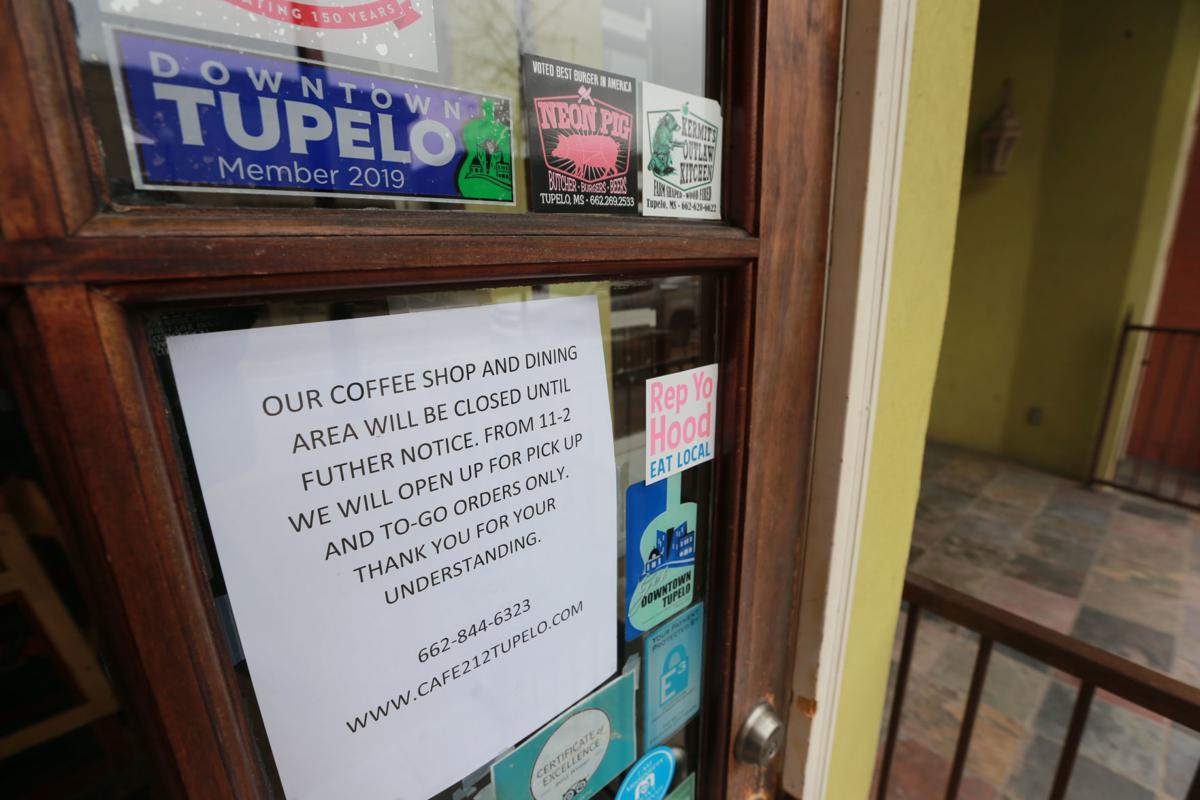 A sign in April informs customers at Cafe 212 in Tupelo that the dining room is closed but they are still serving pickup and to-go orders until further notice.

Pam Robbins, General Manager at Bishop’s BBQ, stocks pulled pork in the kitchen of the McCullough Blvd store in Tupelo as she helps prepare for lunch on Thursday.

A sign in April informs customers at Cafe 212 in Tupelo that the dining room is closed but they are still serving pickup and to-go orders until further notice.

With shelter-in-place orders in effect, along with restrictions on how they can serve customers, restaurant owners are finding avenues to connect with diners.

Dining rooms are still off-limits, but many restaurants have turned to curbside and takeout orders. And after weeks of closures, some eateries have reopened or plan to reopen in the next few days.As shelter-in-place regulations went into effect, the Monroe County Chamber of Commerce started Facebook groups such as To-Go Monroe offering consolidated information to help small businesses promote sales and store information.

“When we found out everything had to be closed, we said we needed to find a way to help keep these businesses open and show the public they’re still open and what they have to offer,” said Kelly Martin, community development director of the Monroe County Chamber of Commerce. “We thought what better way than a group to make it easy for our community to find places they can eat out from, what hours the grocery stores have or who’s delivering, who’s doing curbside and who’s closed?”

“We envisioned for people to post on it initially and then it would fizzle out, but that has not been the case. We’ve had restaurants and grocery stores post on a regular basis, some on a daily basis,” Martin said. “That’s such a big thing in making it easy in times that aren’t easy.”

Coggins has worked at Penny Lane’s for 11 years, and November will mark her third year as owner.

“It has really been a rollercoaster. Some days, we barely do anything and some days we’re so busy we have to have a third person here. There are a lot of emotions going on,” Coggins said of the pandemic. “It’s a lot of sleepless nights, a lot of worry and a lot of stress. The CARES Act did come through, so that’s helping quite a bit. I’m still waiting on the PPP as of right now. You don’t know what’s going to happen from one day to the next.”

Before the pandemic, Penny Lane’s catered to its regular customers in addition to regular groups such as the Aberdeen Breakfast Club, the Lion’s Club, Mission Mississippi and a group of ladies who celebrated birthdays monthly.

While Penny Lane’s has been continuing desserts and daily specials, Coggins is saving new ideas for when the dining room reopens. Brown Eyes Bakery in Amory, however, has introduced new ideas such as social activity kits for children, 50 cent Blue Bell ice cream scoops and meal prep dishes.

“We sell casseroles. All people have to do is open up a can of green beans and have a loaf of bread, and they’ve got supper,” said its owner Shanon Hyatt. “We’re doing a lot of our smallest cakes for birthdays and we try to have some sort of special dessert each week. This week we’ve done anything round because we’re rolling out of April.”

Amory Main Street offered a $30 for the 30th of April promotion, which enabled shoppers to be entered into a drawing by spending $30 locally. Brown Eyes Bakery included $5 in bakery bucks for $30 purchases.

Hyatt said getting supplies has been her biggest difficulty through the pandemic.

Moises Lemus, owner of El Agave in New Albany, said it has been a challenge for his restaurant to adapt to the coronavirus.

There has been a learning curve in terms of changing how the restaurant operates, Lemus said.

“It’s just been weird times,” he said. “I don’t know how else to describe it. This whole thing, the way it’s affected restaurants, has been challenging.”

Restaurants have turned to family packs and lunch specials and other deals to attract diners as the industry has suffered a devastating blow. More than 30,000 restaurants have closed, with losses of more than $25 billion so far.

The next few weeks are critical for restaurants as restrictions slowly ease and business owners continue to rely heavily on curbside and takeout to maintain cashflow.

At the start of the coronavirus, business was really slow, Lemus said, but there has been an uptick since then. However, business is still down compared to what it would normally be with the dining room open. Currently, El Agave is serving customers through its drive-thru window or by curbside.

During normal times, he can predict what sales will be, but the coronavirus has changed that.

“When you don’t have steady business it’s really hard to see into the future,” Lemus said. “We’re used to knowing what’s going to happen tomorrow.”

Knowing how many people to schedule to work during coronavirus can be difficult because the restaurant does not know how busy it will be.

“We’ve had to cut hours and split shifts,” he said.

As long as the coronavirus is a short-term situation, Lemus thinks his business can survive the storm. But it might be a different story if it lasted a year or more.

“The way we’re doing business right now wouldn’t work long term,” Lemus said. “I’m just ready to ride this out and ready to be back to normal.”

It would not make sense to maintain a 7,000-square-foot restaurant and just do business out of the drive-thru window, he said.

Mike Carroll, owner of Ciao Chow in downtown New Albany, said his restaurant is currently getting about 60 percent of the business it was prior to the coronavirus pandemic.

“We are surviving,” Carroll said.

He said it’s been a “rollercoaster” and that he appreciates all the people who have supported the restaurant during this time.

“We thank them so much for helping us to get through this,” Carroll said. “Had it not been for their support, we would have had to shut the doors.”

The business normally has 16 employees but is now down to six, and alcohol and dessert sales have “plummeted.”

Fortunately, the business has been able to offer meals through carryout, curbside and delivery.

Carroll said he is pleased with how Gov. Tate Reeves has handled the coronavirus situation. The governor has not tried to rush things and get businesses reopened too quickly, Carroll added.

The worst thing would be for someone to come to the restaurant and spread the virus to employees and customers, Carroll noted.

Carroll does miss having the dining room open, saying half the fun of his restaurant is the atmosphere.

“What’s an Italian restaurant without a lot of kids and a lot of families and a lot of noise?” he asked. “We really want to get our dining room open and get our folks back in.”

When the dining room does reopen, he thinks it will be done gradually. He has already pulled some tables out of the restaurant to prepare for reopening.

Carroll thinks there will still be many people who want to get meals by carryout or curbside when dining rooms do reopen. Some people will still be very leery of eating inside a restaurant, he added.

In Tupelo, Cafe 212 owners Jason and Amanda Hayden had stayed open for a few days as the pandemic spread but decided to close their business of 14 years until they felt it was time to reopen on a small scale.

Last week, they decided to step back into the game carefully. They took orders for popular items like chicken salad, tuna salad and soup, which they’ll have ready for customers to pick up this coming week. They had to cut off orders after only a day.

“You can only make so much chicken salad at one time,” Jason said. “We already have over a week’s worth of orders in place.”

The couple have been through a range of emotions in the past few weeks.

“Unquenchable anxiety and a big ball of stress,” Jason said. “But I was hanging out with Mitch McCamey (of Neon Pig) the other night and we talked about being able to relax a bit for the first time in a long time, knowing there’s nothing you can do and just realizing you don’t have to go 100 miles an hour.”

The down time has allowed Jason to take naps for the first time in years. He and Amanda have been able to work more on renovating their house.

“It’s been pretty refreshing – but I’m ready to get back to business,” he said.

The Haydens were able to get a Paycheck Protection Program loan through the Small Business Administration, as well as an Emergency Disaster Loan.

“That allows us to pay our employees, and having no sales for a month is just crazy,” he said. “The bills don’t stop. You still have to pay utilities, rent, credit card bills, you name it.”

Whether diners will return to their old ways, waiting in line and sitting down for a meal remains to be seen. Or will takeout and curbside be the new normal, with inside dining becoming passe?

Feather Burns, owner of Woody’s in Tupelo, said there will always be a segment of people who will want to dine in. And being a steakhouse, eating and getting served is part of the experience.

“I think restaurants will have to get more creative in what they offer, but there are so many people who are ready to eat out again,” she said.

BACK TO BARBECUING: After a month-long closures, Bishop's reopens restaurants

TUPELO • For weeks, Ronnie Bishop hasn’t been feeling well at all.