TUPELO • After one of the nation’s top infectious disease agencies released new data about the number of people who have died from COVID-19, Mississippi’s top public health expert and local coroners are urging people against using the recent numbers to downplay the severity of the virus.

Last week, the Centers for Disease Control and Prevention released data listing COVID-19 as the sole cause of death on only 6% of coronavirus-related death certificates filed since Feb. 1. The federal agency said the remaining 94% of the death certificates show underlying health conditions, in addition to the virus, resulted in death.

The CDC’s data was quickly amplified by a number of people on social media who used it to argue that the virus is not as deadly as health experts claim.

But Dr. Thomas Dobbs, Mississippi’s health officer, said at a Thursday press briefing that it’s highly unusual for death certificates to list a single cause of death and stressed that most Mississippians have underlying health conditions, such as hypertension, that would put them at an increased risk of developing severe COVID-19 symptoms.

“I have never filled out a death certificate – and I’ve done it for years until recently – where I just put one thing,” Dobbs said. “So, I’m actually surprised it’s 6%. That seems kind of high. It’s a horrible misinterpretation of what that means.”

When physicians and coroners fill out death certificates, they often list the primary cause of death as well as underlying causes of death and contributing factors. 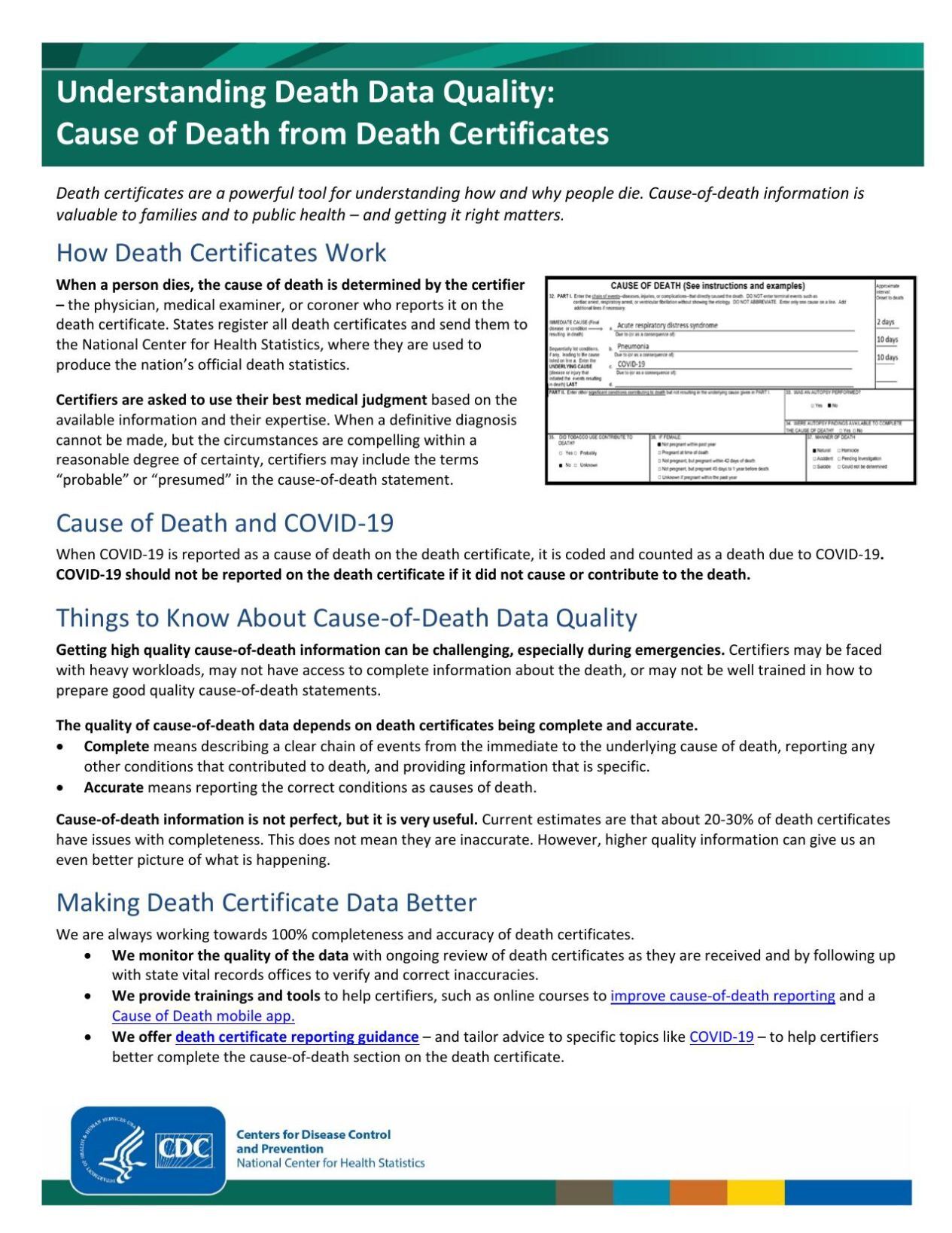 Dobbs read from several death certificates at a press conference where he detailed which scenarios would account for a COVID-19 death and which would not. He said the state health department could even be “over-conservative” about its COVID counts, but it is serious about ensuring that deaths counted as COVID are accurate.

Two coroners in Northeast Mississippi agree that it’s highly unusual for death certificates to only contain one cause of death.

Carolyn Green, the Lee County coroner, said it’s “very rare” for her to list a sole cause of death on a death certificate.

“Probably less than 5% of the time,” Green said.

“If they die in a COVID facility on a ventilator because of respiratory failure, it’s going to be from COVID-19,” Green said.

Green said she often receives input from physicians and reviews medical records while filling out death certificates to ensure that the listed cause of death is accurate.

According to the CDC data, the conditions contributing to deaths involving coronavirus from Feb. 1 to Aug. 22 included a number of underlying health issues. Influenza and pneumonia, respiratory failure, hypertensive diseases, diabetes and other residual causes provided the highest numbers.

According to information listed on the CDC’s website, coroners and other death certifiers are “asked to use their best medical judgment based on the available information and their expertise” when filling out a death certificate.

The CDC website states, in bold lettering, that “COVID-19 should not be reported on the death certificate if it did not cause or contribute to the death.”

Alan Gurley, the Monroe County coroner, echoed Green’s statements and said he often relies on “medical providers of the patients to determine what contributing factors are for COVID-19 deaths.”

“COVID has made the other serious medical conditions worse, just like other things can,” he wrote.

The CDC stresses that people with underlying health conditions – even manageable ones – are at increased risk of developing severe, possibly fatal, symptoms if they contract COVID-19. According to Green, people should not misconstrue the CDC’s data as a reason to shrug off medical experts’ advice for avoiding the virus.

“This is very real and I want people to follow health precautions as much as possible,” Green said.

Swimming inside the Dubai Aquarium

'This is a huge connection': Analyst on pandemic's significance in the polls