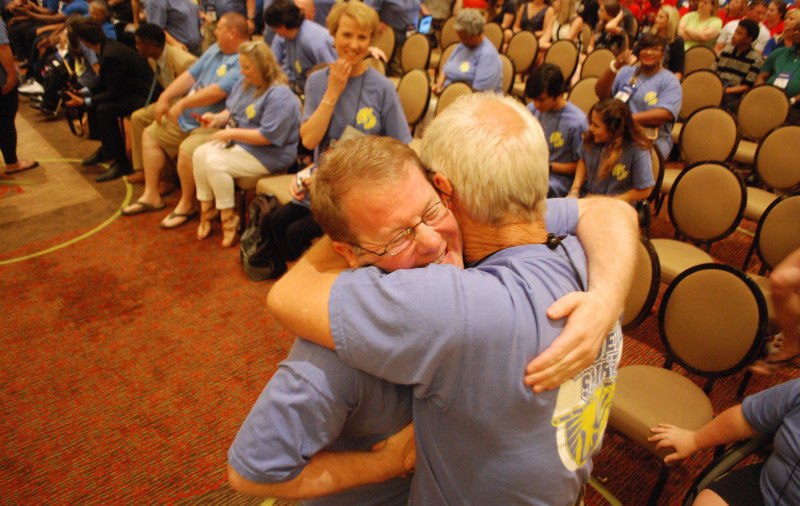 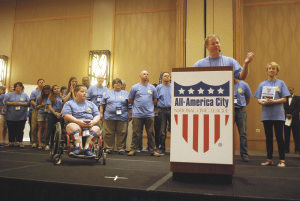 Buy at photos.djournal.comTupelo Mayor Jason Shelton embraces Councilman Travis Beard after Tupelo was named an All-America City in Denver on Sunday evening. Tupelo becomes the only city in the South and only the seventh in the country to have won the award five times.

Buy at photos.djournal.comTupelo Mayor Jason Shelton embraces Councilman Travis Beard after Tupelo was named an All-America City in Denver on Sunday evening. Tupelo becomes the only city in the South and only the seventh in the country to have won the award five times.

DENVER – Tupelo made history Sunday night by becoming the only city in the South to be named an All-America City five times and only the seventh in the country.

That feat was accomplished by a team of city officials, nonprofit organization members and community leaders who traveled to Denver over the weekend to compete in the 2015 All-America City Awards, which are given by the National Civic League.

By showcasing a variety of programs aimed at helping vulnerable youth in the community and uniting abilities of the famous Tupelo Spirit, the 41-member team was able to make its dreams come true.

“It’s just a little bit overwhelming, but it says so much about the city of Tupelo,” said Mayor Jason Shelton moments after the city won the award. “I think we were able to show the judges that while we come from all different walks of life, we are one city, that we’re unified and that we’re all working to make the city of Tupelo a better place to live.”

The celebration continued long after the city’s name was called as one of the 10 of 16 communities chosen to receive the coveted title. Tupelo has won the award, considered to be the highest municipal honor in the country, four times before in 1967, 1989, 1999 and 2011.

The awards are aimed at recognizing communities that have engaged residents in innovative, inclusive and effective efforts to tackle critical changes.

The focus of this year’s All-America City Award is on community efforts to engage and support vulnerable young men and boys.

The Tupelo team shared the city’s wider and community’s response to the 2014 tornado, the construction and ongoing development of the Aquatic Center and the engagement and support of area youth through several programs such as the Police Athletic League, Plant-A-Seed and El Centro.

Even before the city was proclaimed as a winner, the team couldn’t help feeling good about its presentation Saturday following several positive responses from a jury of nationally recognized civic leaders.

After the 10-minute presentation, several members of the jury commended Tupelo for its work in the community.

“I want to, before I ask a question, commend you in particular for a point I think is very important,” said David Bowers, mayor of Roanoke, Virginia, of Tupelo’s Little Ripples program. “You have a community that promises to teach every child to swim.”

Jury forewoman Sharon Metz, who won the award in 2005 as part of a group from Carrollton, Missouri, praised the community for its ability to unite following the 2014 tornado and bank robbery just months before that killed one police officer and critically wounded another.

“We learn in communities … that difficulty either does one or two things – we either give up and decide we can’t do it or it definitely makes us stronger,” Metz said. “And it certainly made you stronger and better not only for your community, but for all of ours.”

During the acceptance speech Sunday, team captain Melinda Tidwell, who is also the executive director of the United Way of Northeast Mississippi, said she was amazed at what the team was able to accomplish thanks to the Tupelo Spirit.

“This last year has been such a struggle for our community, but also a year of great joy after a tornado tore through our community, and we worked so hard to rebuild,” Tidwell said. “This just means a lot to everyone in our community.”

The team will return today to Tupelo – the city that was once set in one of the poorest counties in the poorest state in the nation, the birthplace of the King of Rock ’n’ Roll and a five-time All-America City winner.