With elections only weeks a way, here are answers to some common questions about primary elections.

When is a primary election and what will be on the ballot?

Party primaries are elections by the local political parties to nominate candidates for the general election ballot. Winners, or nominees, of the Republican primary and the Democratic primary will compete against one another in the general election, which takes place on June 8.

In Tupelo, primaries are on Tuesday, April 6, and most candidates running for mayor and the Tupelo City Council will be on the ballot.

On Election Day, polling precincts will be open from 7 a.m. to 7 p.m.

Some voters can also vote by absentee on the days leading up to election day.

Do I have to register with a political party to vote in the primary?

Mississippi is an open primary state, meaning you are not required to register with a political party to vote in the primary election. But you must choose to either vote in the Republican primary or the Democratic primary during an election cycle.

If I’ve voted in a Democratic primary in the past, can I vote in the Republican primary this year, or vice versa?

Yes, voters are free to vote in different primaries each election cycle. However, you must stick with one party throughout the duration of the primary election. For example, if voters in Ward 1 choose to vote in the Democratic primary, they cannot vote in a potential runoff election for the Republican primary. You also cannot vote in one party primary for city council and another party primary for mayor.

What is a runoff election?

How do I know which ward I live in?

Below are a picture of Tupelo’s ward map and a list of all the voting precincts for you to gain a general idea. 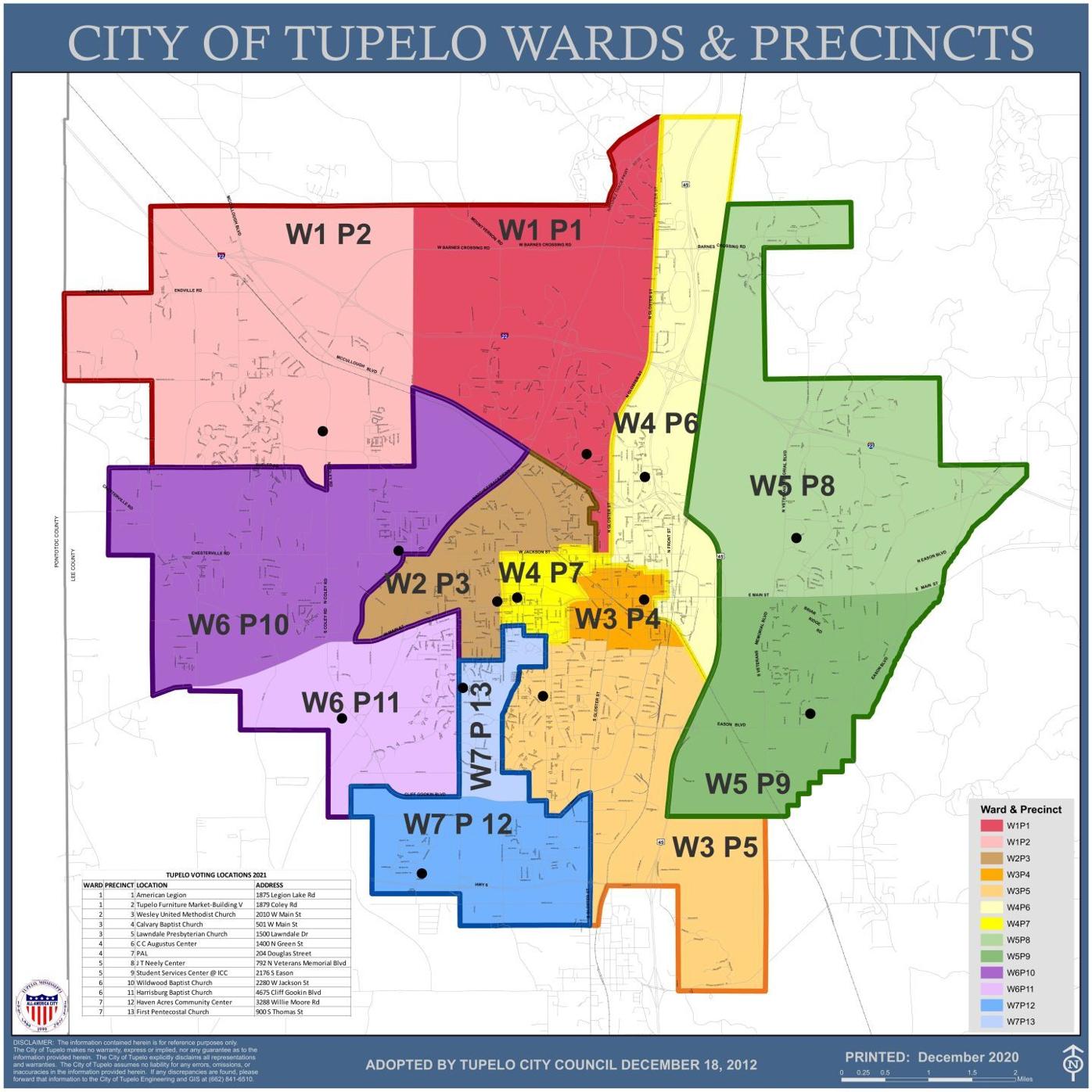 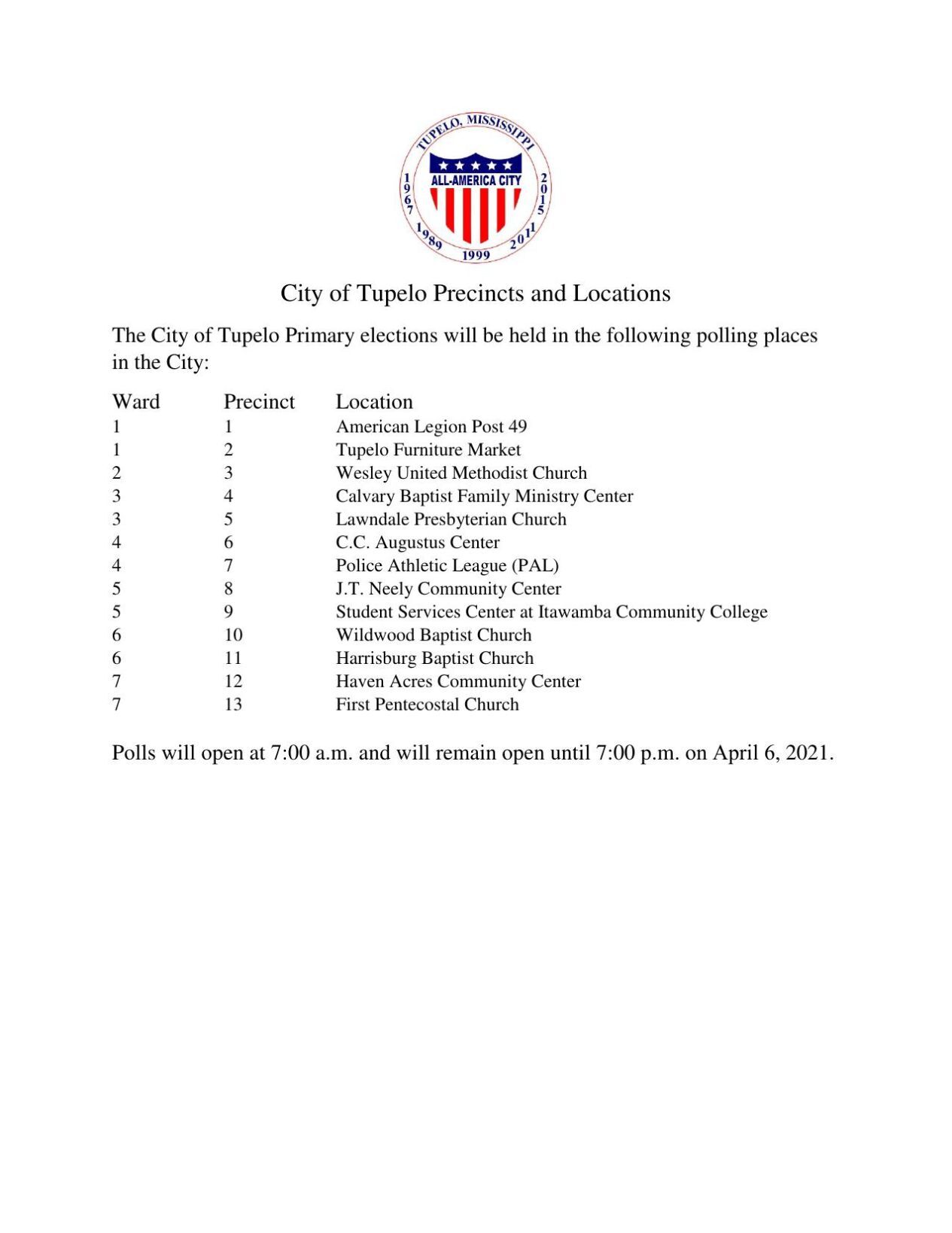 How do I know which precinct to go to on election day?

Do I go to the same precinct I go to for presidential, statewide and county elections?

What do I need to bring with me to vote?

The main thing you need to bring with you to vote is a valid form of photo ID to verify yourself to poll workers. Mississippi has a voter ID law that requires voters verify their identity to vote. The Mississippi Secretary of State’s Office website has a list of all the forms of photo ID that are acceptable.

How do I find out which candidates are running for office? 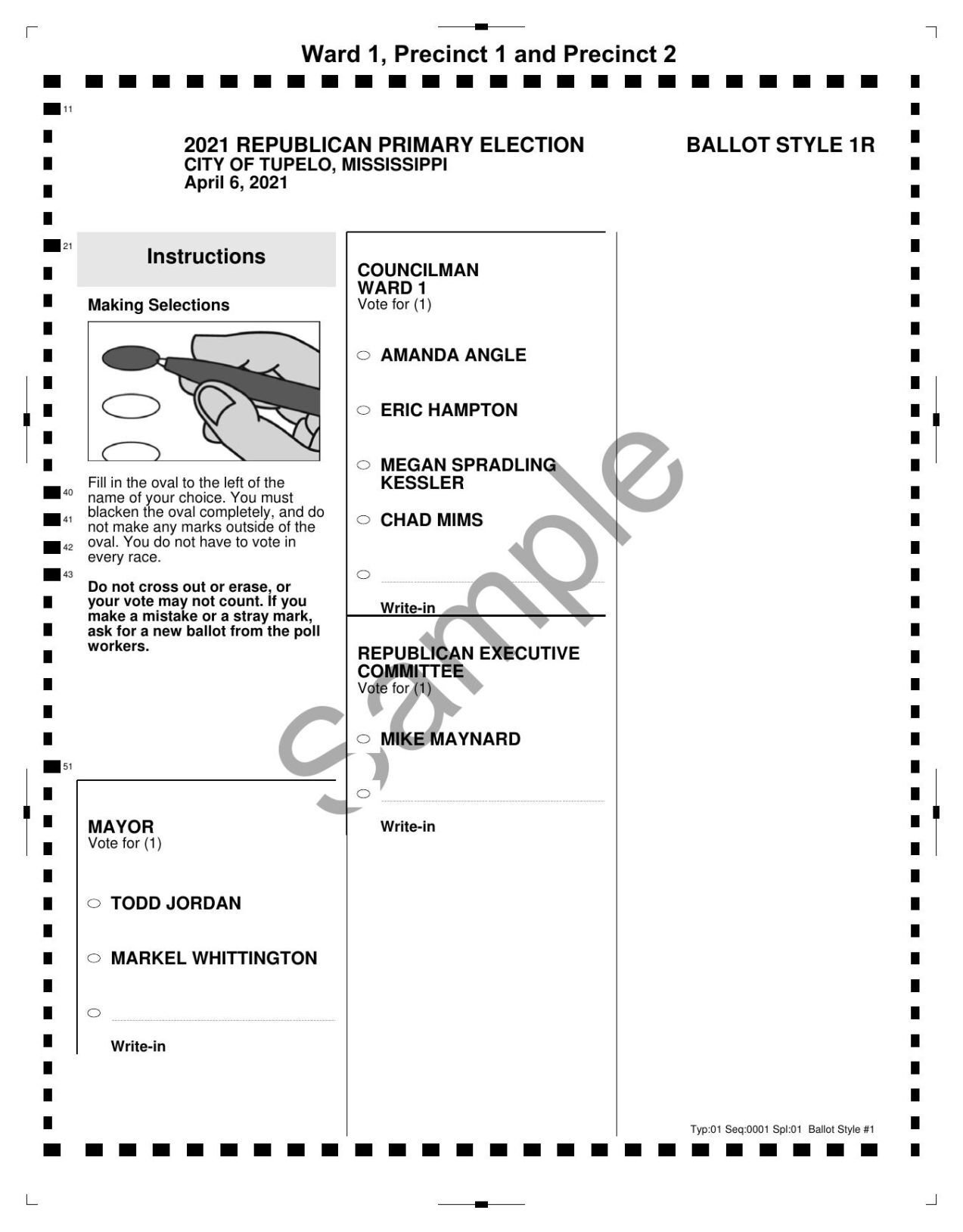 What does it mean to vote by absentee?

By Mississippi standards, voting by absentee is done when someone is unable to cast a vote in person on election day. Eligible Tupelo residents can vote by absentee by going to the municipal clerk’s office inside City Hall on 111 Troy St. or by requesting a ballot by mail by calling the clerk’s office at either 662-841-6505 or 662-841-6506.

How do I know if I can vote by absentee?

The best way to see if you can vote by absentee is to check with the municipal clerk’s office at either 662-841-6505 or 662-841-6506. Mississippi has some of the most restrictive absentee voting laws in the nation and has no system for early voting, meaning that only a small number of people are eligible to vote by absentee. Some of the legal excuses for voting by absentee are being out of town on the date of the election, being 65 or older, being a college student, or being permanently or temporarily disabled.

No, because independent candidates are not affiliated with a political party, they bypass primaries and head straight to the general election.

What happens after the primary election?

If no candidate in a crowded primary receives a majority of the vote, then the top two vote earners will head to a runoff election on April 27. Once the party primaries have nominated candidates, the nominees will compete in a general election on June 8.

TUPELO • Two candidates are hoping to unseat a longtime incumbent member of the Tupelo City Council in the Republican primary for the Ward 6 seat.

TUPELO • Two candidates are competing for the Democratic nomination for the Tupelo City Council’s Ward 2 seat, and each of them share similar …

Polls open at 7 a.m. Tuesday, April 6, for Tupelo's municipal elections. Here' all the information you need before you cast your vote, includi…

TUPELO • The qualification period for Tupelo’s upcoming municipal elections came to a close Friday, cementing the shape of the April 6 primaries.

TUPELO • Registered voters in Tupelo can now vote by absentee in party primaries for this year’s municipal elections.

TUPELO • Three candidates are vying to be Tupelo’s next mayor.

TUPELO • Four candidates are competing in the Republican primary for the Tupelo City Council’s Ward 1 seat, an open race that has drawn a comp…

TUPELO • Two political newcomers are working to unseat an incumbent member of the Tupelo City Council, even as another candidate in that ward …

Keilar: Sen. Hawley complains of being canceled ... while on national TV

Mitch McConnell: '100% of my focus is stopping' Joe Biden

He was at the Capitol riot. Now he's tallying Arizona ballots