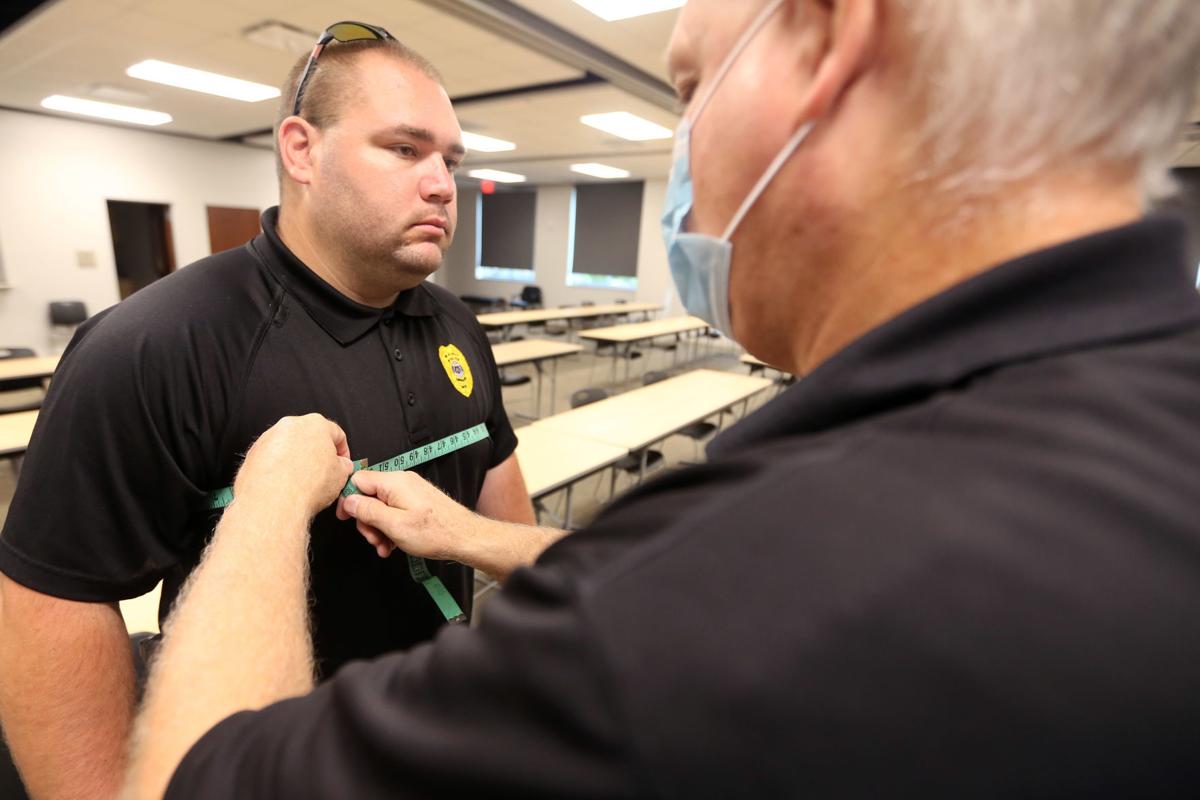 Adam Zellner, an officer with the Walnut Police Department, is fitted for body armor by Terry Dahlem of Mid-South Uniform Friday morning in the community room of the Tupelo Police Department. Wives of Warriors fitted 40 officers with new vests. 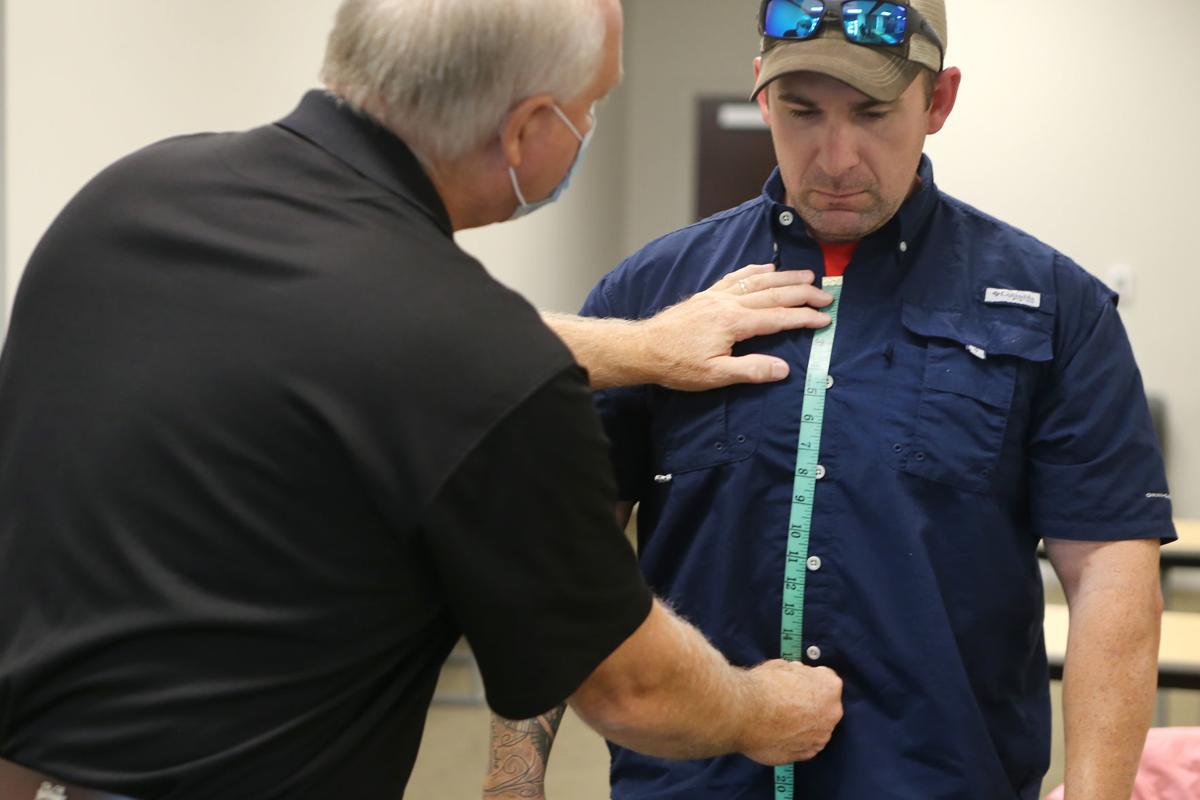 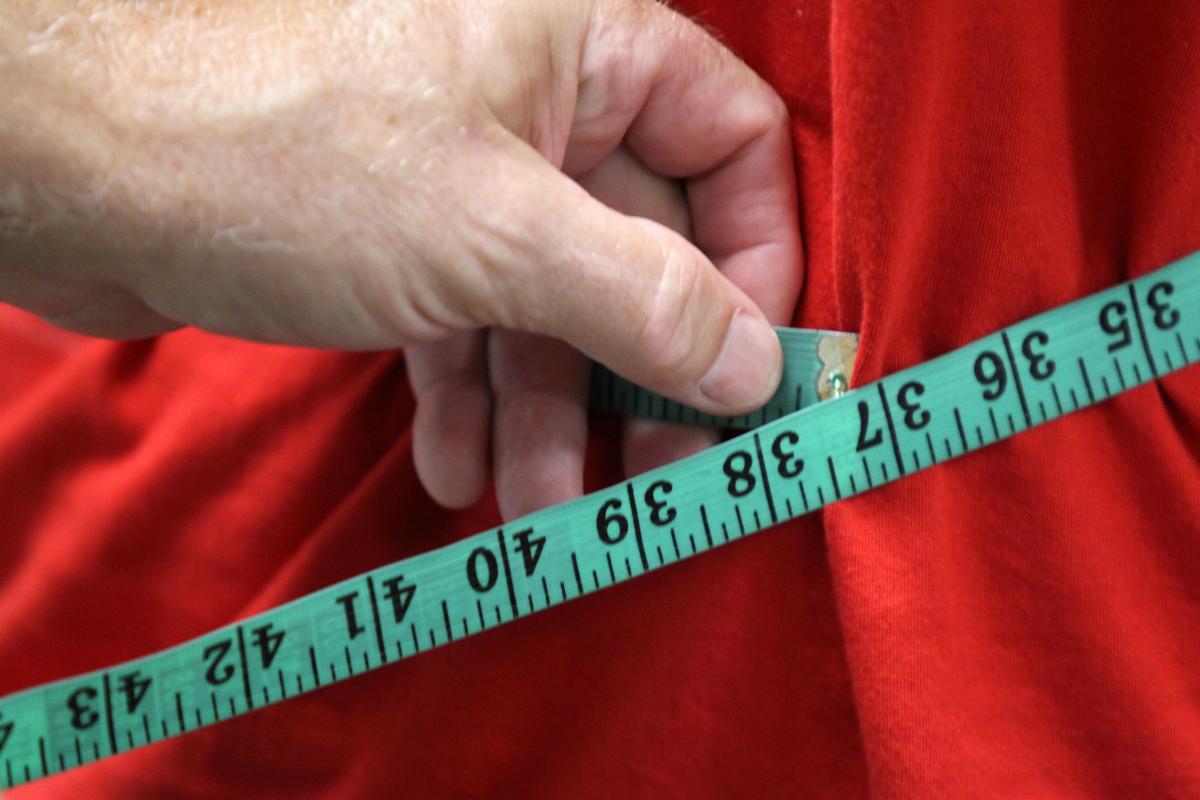 Adam Zellner, an officer with the Walnut Police Department, is fitted for body armor by Terry Dahlem of Mid-South Uniform Friday morning in the community room of the Tupelo Police Department. Wives of Warriors fitted 40 officers with new vests.

TUPELO • By the end of summer, 40 officers from across the region will have brand new protective vests, thanks to a law enforcement support group.

Over the last five years, the Wives of Warriors has been able to provide new, custom-fitted body armor to 157 officers. The proceeds come from an annual 5K run held the last weekend in September.

“We are going to provide 40 vests to 35 departments this year,” said Kim Rushing, president of the support group for the spouses of law enforcement officers. “That is the most we have been able to provide so far.

“The run continues to grow, but I think the silent auction really helped raise that extra money to allow us to have such a good year.”

The support group has a core group of 22 local agencies that provide help and volunteers to pull off the race each year. Those agencies were already down to receive one vest each. The other vests are alloted to needy departments based on requests.

The bulk of the vests will stay in northeast Mississippi, but one will travel 120 miles from Tupelo to the Goodman Police Department. The town of 1,300 people is in Holmes County, just off Interstate 55.

“They sent in a request, saying they have five officers and none of them had a vest,” Rushing said.

All of the officers getting a vest travelled to the Tupelo Police Department Friday morning to get measured by Terry Dahlem of Mid-South Uniforms. Each vest is custom made to fit the individual, not only to make it comfortable but also to ensure maximum coverage by the protective panels.

The $650 vests are designed so they can go in all types of carriers. The body armor can be used under the uniform, over the uniform or in the new style where it is part of the uniform. It will take about six weeks for the vests to be made and delivered to the support group.

The sixth Blessed Are the Peacemakers 5K run is scheduled to take place Sept. 26 in downtown Tupelo. But it is not known what form the race will take.

“Right now it is scheduled to go on as normal,” Rushing said. “We already have 238 people registered, which is probably the most ever at this time of the year.

“But with the coronavirus, everything is up in the air.”

Social distancing requirements might force runners to start in waves to make sure everyone is spaced out. If the pandemic forces the cancellation of the actual race, it will not be that hard to switch to a virtual race.

In recent years, the group has offered a “Phantom Runner” option to allow people to donate to the cause, get a T-shirt but not actually run. And the silent auction is handled online on Facebook.

People can register for the race online at runsignup.com