Rep. Trent Kelly, waves to his fellow veterans as he speaks at the Guntown Middle School Veterans Day program. 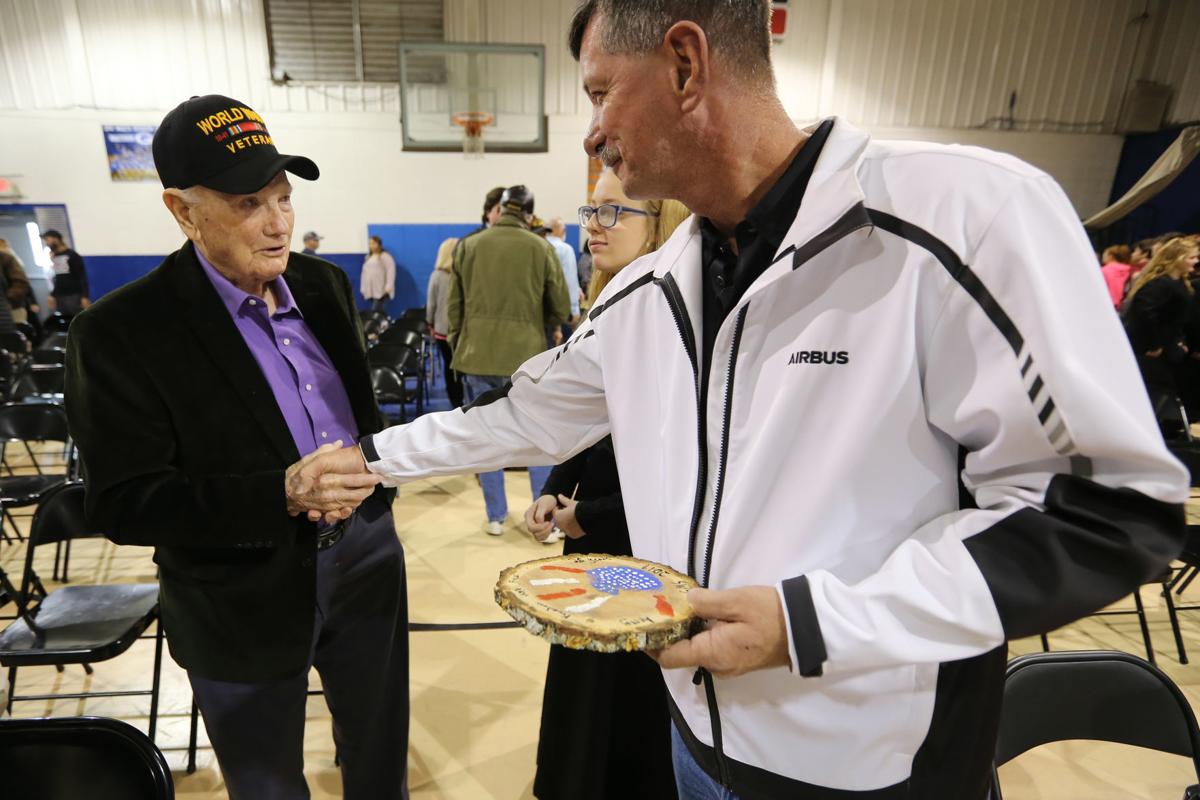 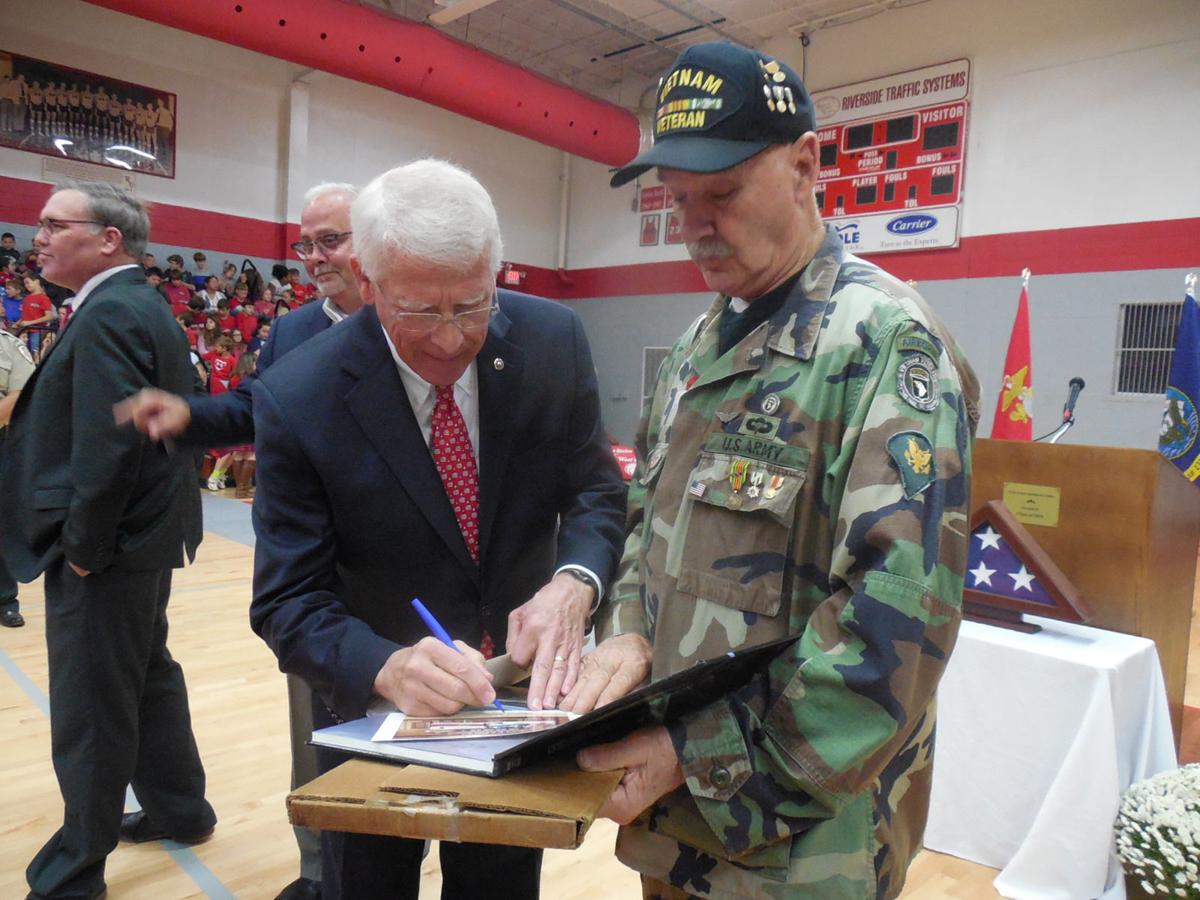 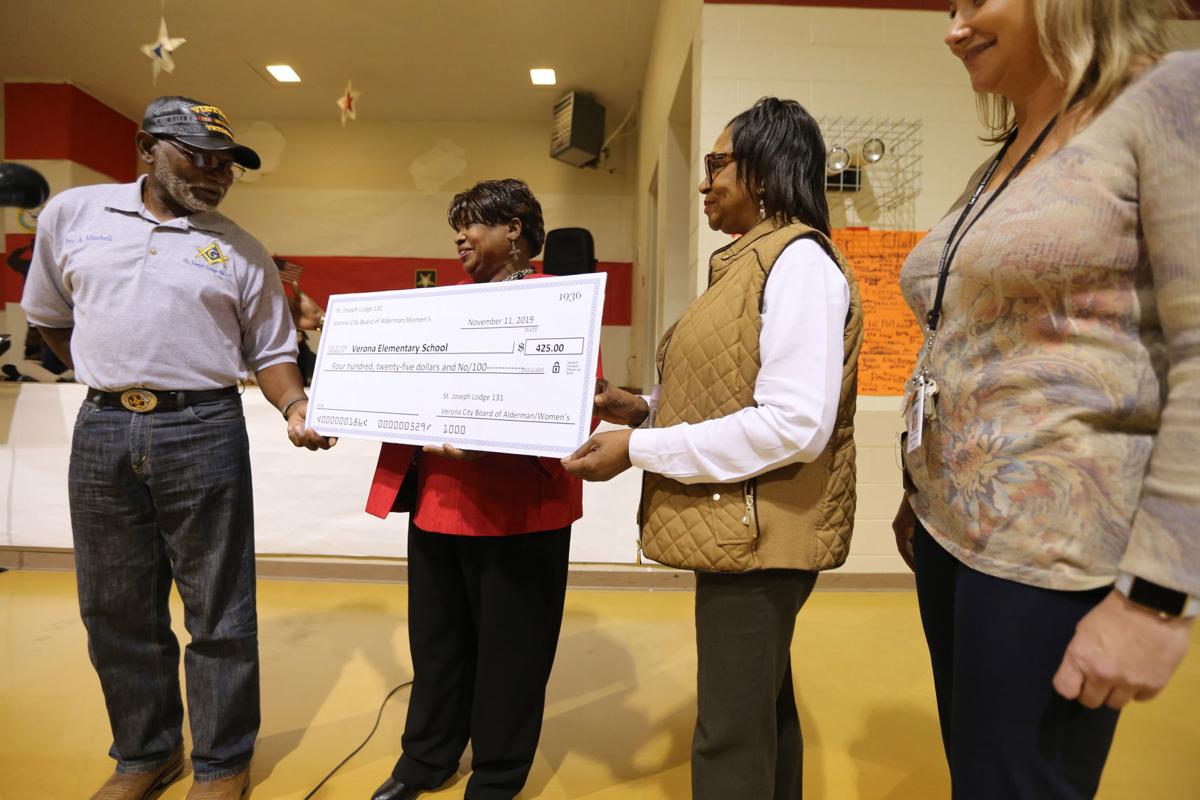 Rep. Trent Kelly, waves to his fellow veterans as he speaks at the Guntown Middle School Veterans Day program.

Military veterans were recognized for their service by Rep. Trent Kelly and U.S. Sen. Roger Wicker, R-Miss., at Veterans Day programs in northeast Mississippi on Monday.

Kelly addressed seventh and eighth grade students at Guntown Middle School during a Veterans Day program on Monday morning that began with a moment of silence as band director Robin Hill played “Taps.”

Kelly has spent 33 years in the Mississippi Army National Guard as a combat engineer and currently serves as a brigadier general.

He recognized veterans from World War II, the Korean War, the Vietnam War, and those who served in recent and ongoing wars like the Gulf War, Iraq War and the war in Afghanistan.

He also acknowledged “the ones who really paid the price” – those who had an immediate family member who served in one of those wars.

“We can’t do it without them and I don’t think you’ll find a veteran out there who will tell you that they can do it without the family support and people at home who do so much for them,” Kelly said.

Kelly recalled attending Neshoba Baptist Church as a small child with his grandfather and seeing veterans there who inspired him to serve.

“Some of them walked with canes and some of them had limps, but when they asked them on that morning on Veterans Day or Memorial Day, ‘If you served this nation, will you stand?’ they would stand so tall,” Kelly said. “And you’d see how proud they were to have served just that little bit of time for this great nation.”

Students also had a hand in the program. The choir performed a medley of patriotic songs and the eighth grade band performed “Marches of the Armed Forces,” as veterans in the audience stood up to be applauded when their march was played.

“They’ve given so much in their life that they can’t give back,” Kelly said. “In addition to the ones who gave their lives, these gave things – they gave up anniversaries, seeing parents die, seeing babies born, job opportunities, on and on and on.”

Clyde Neaves, a 98-year-old World War II veteran who served in the South Pacific for three years as a small arms weapon mechanic, was the only WWII veteran in attendance.

He believes having Veterans Day programs at local schools is a great thing and that “there will be a segment of (students) that remember and let it affect their lives.”

“I want to take this patriotism from Union County and bottle it up and take it to Washington, D.C.,” Wicker said.

Dozens of veterans also attended the Veterans Day ceremony at the school. As the veterans entered the gym, the song “I’m Proud To Be An American” played as students waved flags.

Without veterans “we wouldn’t have a country; we wouldn’t be saluting this flag today,” Wicker said.

He noted that last week there was an election in Mississippi and said veterans deserve thanks for protecting citizens’ rights to vote.

“If you are thankful that we have a right to vote ... then thank one of these veterans for that right,” he said.

Wicker also thanked veteran groups, saying they help make good bipartisan policy. While there is a lot of disagreement in Washington, D.C., there have also been 57 veteran-related bills signed into law in the past two and a half years, he said.

At Verona Elementary School’s Veterans Day program on Monday afternoon, a local veteran gave back to the school while he and other veterans in attendance were honored by students who sang songs and gave short speeches on the significance of the holiday.

Albert Mitchell, who served two tours of duty in Vietnam, one in the Gulf War and one in Iraq, presented a check for $425 to the school on behalf of St. Joseph Masonic Lodge No. 131 and the city of Verona.

The lodge normally gives away school supplies each year at its annual Labor Day parade, but found that they weren’t able to reach as many kids as they hoped to.

The money will go toward covering the cost of field trips and school supplies for children who can’t afford it and updating playground equipment, Mitchell said.

“We want to support our youth in Verona and this is one way,” Mitchell said. “We’ve got a nucleus right here, so this is what we’re going to focus on the next few years.”

Josh Mitchell of the New Albany Gazette contributed to this story.

TUPELO • Jesse Clift has seen a lot in his 92 years of life. He’s served in and survived three wars: World War II, the Korean War and the Viet…

California dominates list of most polluted cities in U.S.

Zoe Lofgren: Trump ought to be more presidential