TUPELO • Even as her office argues in court that the state of Mississippi is providing adequate mental health services, Attorney General Lynn Fitch says she might consider fighting a judge's ruling to the contrary.

The state is currently asking U.S. District Judge Carlton Reeves to find that it has made sufficient improvements since he ruled in 2019 that Mississippi was in violated of federal law and “operates a system that unlawfully discriminates against persons with serious mental illness.”

In a recent filing with the court, the attorney general's office argued that since this ruling, the state has made improvements to its mental health services, with additional improvements planned.

Before speaking at the Lee County Republican Women's Club on Tuesday night, Fitch told the Daily Journal that if Reeves orders additional federal remedies to improve state mental health services, she would “take a hard look” at appealing the decision.

“We represent all of the parties, and it’s in the best interest of the state to continue to provide great and empowering services,” Fitch said. “We’ll look at it, but we feel like it’s a very comprehensive plan, and the judge is going to take a hard look at it.”

Attorneys in the Mississippi Attorney General’s Office wrote in court documents on April 30 that Mississippi is in compliance with the Americans with Disabilities Act and that the state is meeting mental health needs for Mississippi residents.

The state has asked the court to dismiss a suit brought by the federal government.

If Reeves rules in favor of the DOJ and the state appeals the order, the U.S. Court of Appeals for the 5th Circuit would have the option to weigh in on the suit. 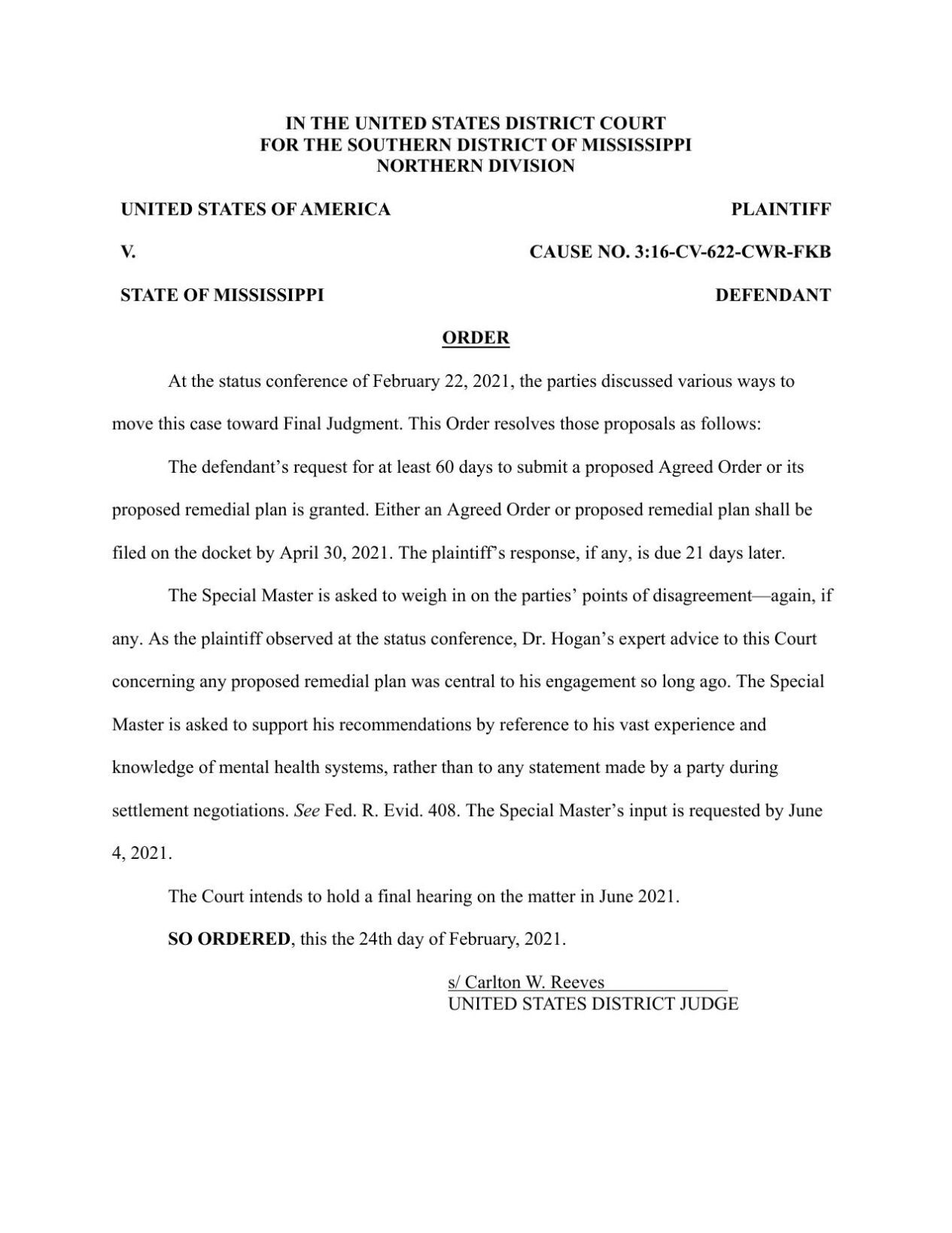 The state’s proposal is in response to a court order issued by U.S. District Judge Carlton Reeves requiring both attorneys for the state and the U.S. Department of Justice to submit a remediation plan for mental health services.

The justice department’s attorneys have until May 21 to submit their own proposed plan.

Michael Hogan, the appointed special master who is ensuring the court’s wishes are carried out during the litigation, will have a chance to weigh in on any potential disagreements in the different plans on June 4.

The attorneys will also convene for a new hearing before the court in June 2021.

As evidence, the state argues that it has enacted more community-based treatment services such as mobile crisis response teams and crisis stabilization units in each mental health region of the state.

The state was forced to enter into a remedial process after Judge Reeves ruled in September 2019 that Mississippi was in violation of the federal Americans with Disabilities Act because there were inadequate resources in Mississippi communities to treat people with mental illnesses effectively.

Reeves concluded that Mississippians with mental illness were essentially being segregated to state-run hospitals instead of being treated within community centers.

Joy Hogge is the executive director of Families with Allies, a mental health advocacy in the state.

She told the Daily Journal that she’s interested in knowing if one of the parties the AG’s office is representing are actual people who need these services and how has the AG’s office gotten their feedback on services that are needed.

“I’d also like to learn more about what outcomes will be used to assess this plan, how input from people receiving services will be gathered and how the necessary coordination among the division of Medicaid, the Department of Mental Health, the community mental health centers and managed care organizations will be accomplished,” Hogge said.

JACKSON • Attorneys representing the U.S. Department of Justice and the state of Mississippi…

JACKSON • The U.S. Department of Justice is asking a federal judge to force Mississippi’s mental health agency to increase the number of commu…

Keilar: NYC's mayor has zero you-know-whats to give