JACKSON • Forty-six Mississippi historians have signed a letter urging state lawmakers to reject a proposal that would let politicians choose who oversees the Mississippi Department of Archives and History.

“(W)e are asking that you not interfere with the independence of an entity that has done so much good work for our state,” said the letter, distributed to House members Thursday. “To improve this invaluable Department, what is needed is an increase in funding. Please do not politicize its Board of Trustees.”

Senate Bill 2727 would turn the agency’s nine-member board into a panel appointed by the governor and lieutenant governor rather than one that selects its own members, as has been the case since 1902. The legislation quietly cleared the Senate on a party-line vote earlier this month and now awaits consideration in the House.

Since its passage, the proposal has garnered increasing scrutiny and opposition from historians and archivists who say they are concerned about potential political interference at MDAH. The agency runs the Two Mississippi Museums in Jackson, oversees historic sites and buildings, manages a trove of historic documents, photographs and historical artifacts, and conducts educational and outreach programs.

The group of historians who publicly opposed the legislation hailed from the Mississippi Humanities Council and many of the state’s colleges and universities, though they noted they were not representing those institutions with their letter. The letter praised the agency and board for its work creating the Civil Rights Museum and the Museum of Mississippi History, as well as the agency’s work shepherding last year’s committee that chose a new state flag. 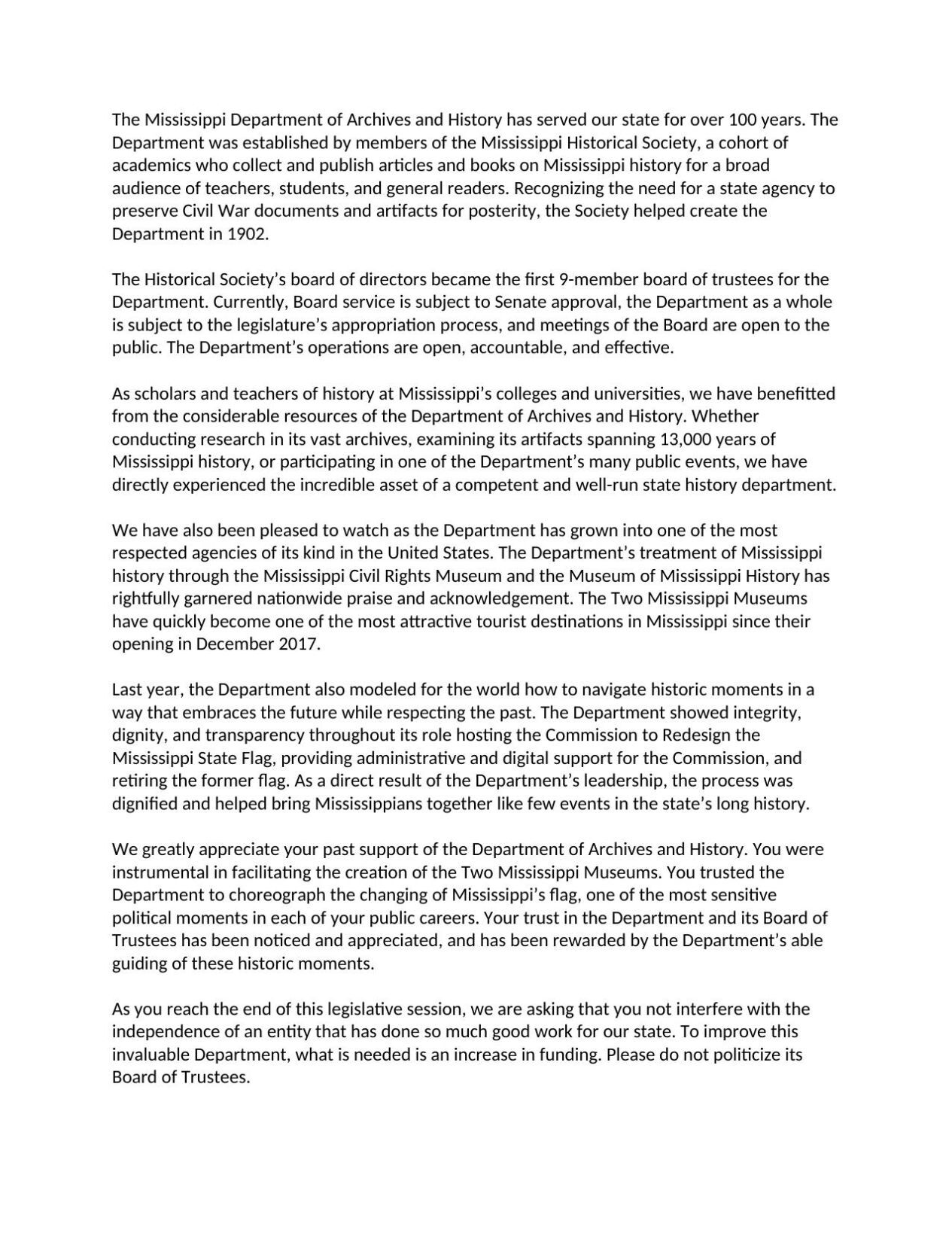 Another group that opposed the bill in recent days was the Society of Mississippi Archivists.

“Mississippi is a state with a complex and difficult history that still struggles with issues of civil rights and racial justice,” the archivists said in a statement condemning the legislation. “The ability to continue work in the preservation and accessibility of Mississippi history unencumbered by political interests is critical to the success of the mission of MDAH. The independence of the MDAH Board has been central to its integrity, and it should remain that way.”

The MDAH board is self-perpetuating, meaning it approves new members when someone resigns or when their term ends, and that selection is forwarded to the Senate for confirmation.

The bill’s author, Sen. Mike Thompson, R-Long Beach, previously said making the board appointed by the governor and lieutenant governor would add a layer of accountability – the public could blame one of those politicians if they didn’t like the board’s actions. He noted the board is one of the only in the state that is self-perpetuating.

Thompson did not respond to a request for comment Thursday. MDAH Board of Trustees President Reuben Anderson has declined to comment on the legislative proposal.

DeeDee Baldwin, a history research librarian and past president of the Society of Mississippi Archivists, said she and other members of the group became concerned after reading a Daily Journal story about the proposal earlier this month.

“We’re worried that (politicians) would try to influence future MDAH staffing decisions, whether they hire certain people, whether certain programming continues on,” she said, adding the agency has done an impressive job of honestly showing Mississippi’s difficult history.

Stuart Rockoff, executive director of the Mississippi Humanities Council, said he reached out to historians he knew around the state late Tuesday about whether they would be interested in signing on to a letter he’d drafted supporting the agency’s independence. Dozens of them quickly signed on.

“There was a strong sense that the way Archives and History is currently organized is the best way for it to be,” Rockoff told the Daily Journal. He said that while he doesn’t believe the purpose of the bill is to inject politics into the agency, “I just think it will have that consequence.”

Rockoff said Mississippians need only look to the Civil Rights Museum – praised by both civil rights activists as well as then-President Donald Trump when it opened in 2017 – to realize the agency and its board has done good work as it’s currently configured.

Rockoff said he served on a scholarly review committee as the museums were being planned by MDAH, and the group was only focused on “what’s true, what’s honest and what’s complete. We didn’t worry about, ‘Is this going to have political ramifications if we tell this story, and we don’t tell that?’”

SB 2727 had not been referred to a House committee as of Thursday. Four MDAH board members continue to await Senate confirmation: Nancy Carpenter, Spence Flatgard, Edmond E. Hughes Jr. and Helen Moss Smith.

Senate bill could politicize Mississippi archives and history board

2 dead, including suspect, after shooting spree on highway, in Wawa parking lot